Voisins – in St Helier, Jersey – displayed the sign for 18 months, and even kept it up after receiving complaints. 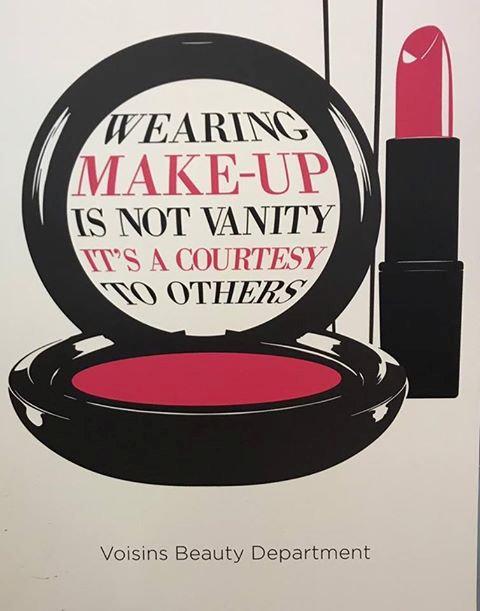 But the department store defended the advert, saying it was chosen by an all-female marketing team and was meant to be "tongue-in-cheek".

It was finally taken down after an backlash by UK campaigners Not Buying It! and online publication The Heroine Collective.

Not Buying It! wrote on Twitter: "Does Jersey's Voisins – the UK's 'Oldest Family Store' have the UK's NASTIEST Ad? This is how it advertises its Beauty Dept. Email them, tell them exactly what you think of their 'family values'".

Voisins removed the sign on January 8, and later posted an apology online.

They wrote: "We are aware that there have been some negative comments about a visual in our beauty department.

"We have taken this feedback on board and have removed the poster.

"We apologise for any offence caused. We did not intend for it to be interpreted in this way, more a tongue-in-cheek quote attributed to LaNetta Maxfield.

"It complements a campaign of humorous quotes we have had on display in the past around the store."

A spokeswoman for Voisins said: "It is very subjective how people can read something and we decided to remove it so as not to cause offence to our customers."

Voisins was founded in 1837 and is the oldest family-run department store in Britain, bringing luxury brands and "exceptional customer service" to the island.

In more beauty news, your hair straighteners have an expiry date – and it's time to replace them if the heat indicator light starts blinking.

Vassuol's £11 blackhead-sucking face mask has racked up over 3,000 five-star reviews on Amazon from customers who say the product is 'magic'.

And from bald patches to brittle breaks, stars including Kim Kardashian and Chloe Ferry reveal the painful truth about hair extensions.