LOS ANGELES — From the outside, LaRayia’s Bodega looks like a harbinger of the sort of gentrification it is designed to fight.

There are chic potted plants on floating shelves, crystals and candles for sale, and in the back, a large, brightly colored wall of fake flowers, perfect for an Instagram photo shoot.

The difference is the cost, and the owner’s mission. All of the food is $5 or less, and the bodega will eventually provide job training as well as employment opportunities for veterans and the homeless.

Over a $5 lunch of kale and arugula salad with a carrot ginger dressing, served with a Caribbean-style potato coconut soup, Ms. Gaston said the bodega is “an ode” to activist-driven community programs, like the free breakfast program run by the Black Panthers in the late 1960s.

It’s the latest venture of Love Without Reason, the nonprofit she founded four years ago. Her organization runs a meal program, Lunch On Me, that serves 10,000 meals to the homeless per month in Los Angeles, and provides similar services in Hawaii and New York City, where Ms. Gaston is from.

The shop is called a bodega, she said, because the term brings to mind a sense of community. (The term “bodega” may not be big in Los Angeles, but for Ms. Gaston it has more resonance than “tiendita” or “minimart.”)

To foster a sense of community, she plans to hold events like monthly birthday parties for children and open-mic nights at the store, as well as sip-and-paint classes for children (with cold-pressed juice). The cafe offers vegan salads, soups and chili — all made from scratch in-house — as well as organic snacks, donated by sponsors and companies, that sell for $1 to $2 each.

“This is about giving people a chance to have fresh foods,” Ms. Gaston said. “There are people who want salads that don’t have the means. I have war vets that are 60 years old that are like, ‘Give me arugula today, baby.’” 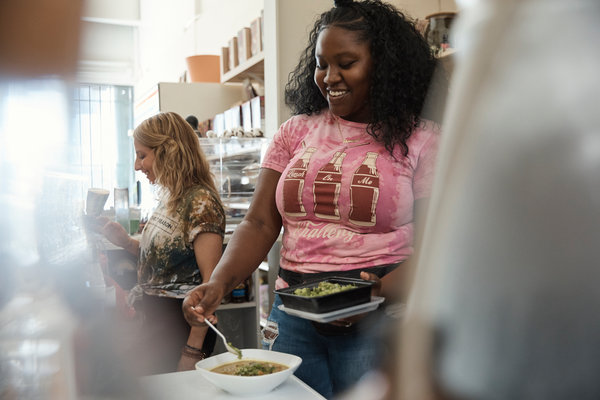 “Nothing looks like Skid Row,” Ms. Gaston said. “My favorite people in the world are in Skid Row. I love them so much. But outside looking in, just looking at it, it’s painful.”

“Not to be too woo-woo, but connecting with her, she kept saying go to Skid Row, pitch a tent,” Ms. Gaston said.

“You can’t fix it unless you go to those places,” she added.

Love Without Reason has already helped some Skid Row residents get jobs at local restaurants and food trucks, but Ms. Gaston is hoping to expand that further in her own shop. (She is also working on getting the shop approved to accept food stamps.)

Ms. Gaston said that, for her, “everything is emotionally charged” and many of her initiatives stem from her interactions with community members. After seeing how many school-age children pass by the bodega — there are several schools within blocks — she started offering free meals to them. In December she plans to distribute complimentary snack packages as well.