When Rohini Pragasam and Chris Walton met for a first date in April 2018 at a Japanese restaurant in Manhattan, each had arrived in anticipation of impressing the other with knowledge of all-things Japan.

But before Ms. Pragasam, 52, could mention the fact that she had studied Japanese in college and lived in and around Tokyo for four years, Mr. Walton, 57, told her that he had spent nearly seven years of his life working in Southern Japan and was now the owner and founder of Eton Venture Services, a financial services firm based in Austin, Texas. (He graduated from the University of Washington and received a law degree from Stanford.)

“What were the odds that we would have such a bizarrely common background,” said Ms. Pragasam,” the head of communications and marketing at ORIX Corporation USA, a publicly-owned, Tokyo-based international financial services company. (She graduated from Kenyon College.)

“The more we spoke, the more we realized how many things about Japan we had in common,” she said. “Though neither of us are Japanese, we both spoke the language, we both read the same textbooks there, and what made our initial conversation so fascinating is that there was nothing about Japan in either of our online profiles.”

While Ms. Pragasam first went to Japan as part of a studies abroad program in college, she returned after graduating to work there for three more years after landing a job in the financial services division of a bank. 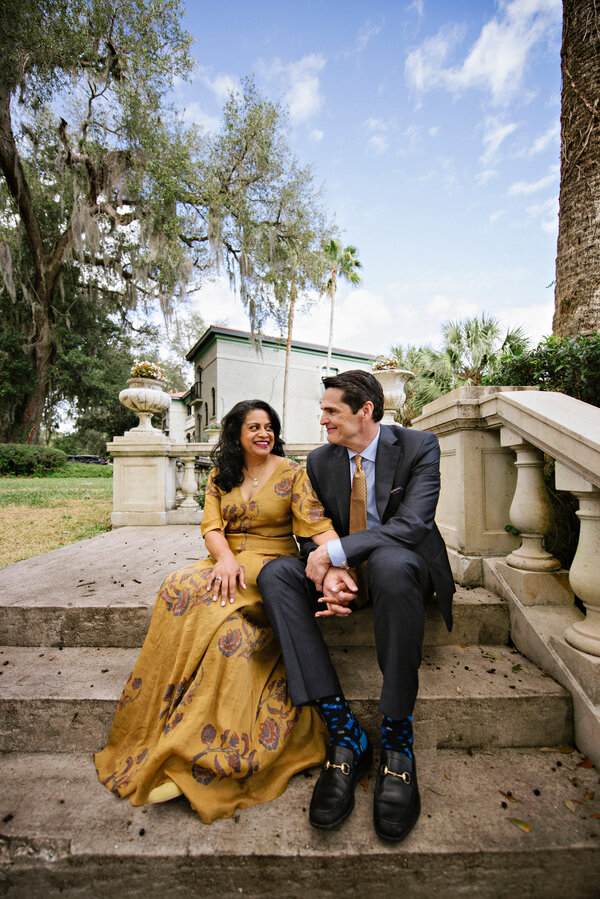 But she had long-settled back in the U.S., and was living in Manhattan for nearly 21 years when she met Mr. Walton, who happened to be working for a week in Manhattan, on Tinder.

“I had been single for a couple of years and had gone on various dating sites with no luck,” said Ms. Pragasam, who quickly learned that Mr. Walton was divorced and raising a daughter. Ms. Pragasam was also divorced, but had no children.

“But in Chris’s case, he just looked so amazing in the photos he posted that I just said to myself, ‘can this really be,’ and though I had a bit of trepidation, I gave it a chance.” They squeezed in a few dates and it wasn’t long before both Ms. Pragasam and Mr. Walton realized that they had found something.

“There was a huge sense of familiarity when I first met Rohini,” Mr. Walton said. “When we compared notes, we figured that we overlapped in Japan for about a year, so there was a chance we could have met there, you never know.”

Ms. Pragasam suggested that even if they had met at that time, chances are they would not have proceeded beyond an exchange of hellos.

“Back then, I was a college student and he was a married man,” she said. “So no, we probably wouldn’t have met there.”

Mr. Walton, who considerably shortened their long-distance relationship in September 2018, when he moved into her Manhattan co-op, said he was more than satisfied as to how things worked out.

“I really didn’t think I would marry again,” he said. “However, in Rohini I found a perfect counterpart and partner. She has such a beautiful mind, she complements me and we understand each other on so many different levels.”

They were married Dec. 31 at Club Continental in Orange Park, Fla., before the Rev. Tom Borland, a Presbyterian minister, three guests and a Zoom audience. (The original plan was a destination wedding in Barbados, but the coronavirus changed that.)

“Pretty soon after I met him,” the bride said, “I knew I wanted to be with him forever.”