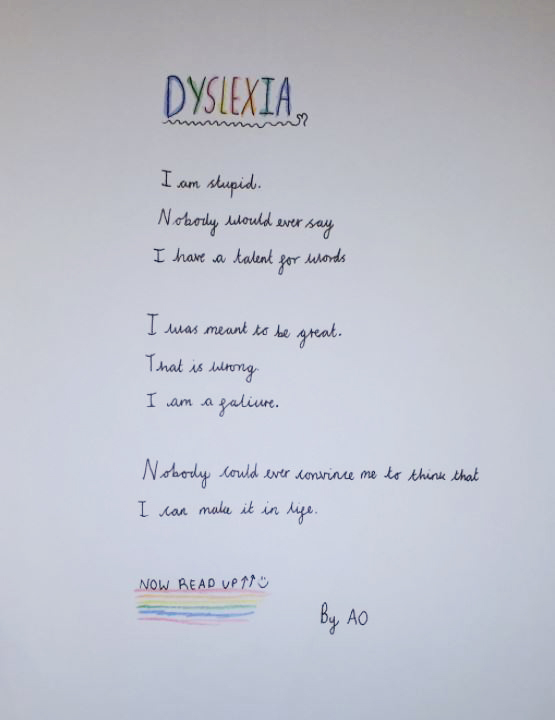 “Today we looked at poems that could be read forwards and backwards,” Jane wrote.

“I was stunned by this one written by one of my 10 year olds.”

The poem, Dyslexia, begins with the line “I am stupid.”

It continues for several lines, revealing how dyslexia meant “Nobody would ever say I have a talent for words. I was meant to be great. That is wrong. I am a failure.” 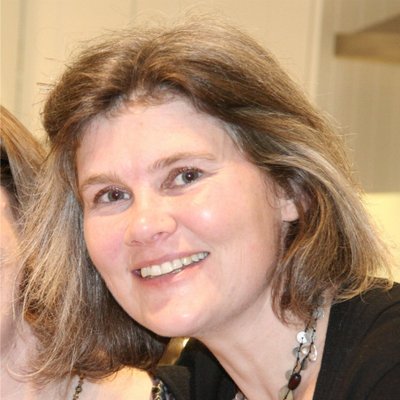 Nobody would ever say

I have a talent for words

I was meant to be great

I am a failure

Nobody could ever convince me to think that

I can make it in life

I can make it in life

Nobody could ever convince me to think that

I am a failure

I was meant to be great

I have a talent for words

Nobody would ever say

The melancholy poem continues in this vain for two more verses before the student, known only as “AO”, penned an instruction to “Now read up.”

The beauty of AO’s piece is suddenly revealed when read in reverse, line by line.

His same words suddenly change into an empowering message to the reader to never give up despite the challenges life throws at you.

“Nobody could ever convince me to think that I am a failure,” the poem now says.

“That is wrong. I was meant to be great. I have a talent for words.”

Jane said the poem moved her to post it and made her realise how important her work was.

“It is a privilege to help find, nurture and celebrate the talents of children,” Jane wrote.

The post went viral in just a few hours and has since been liked more than 140,000 times and shared by more than 42,000 people.

Thousands of people praised the young poet’s skill in conveying the struggles associated with dyslexia.

One man called the poem “wonderful”.

“I was called stupid by my year 6 teacher. 3 years later diagnosed with dyslexia,” he said.

“We just see things others can not.”

Many people also praised Jane, saying she “must be a wonderful teacher”.

But according to Jane, all the credit was owed to “my little poet”.

The year six student was clearly smarter than most adults, with many admitting they had taken her instructions too literally, reading it backwards “word for word, not line by line”.

The poem also attracted the attention of established writers, poets and publishers who have since offered AO the chance for her poetry to be published in their books and blogs.

The young poet has also been asked to write for publications.

This little girl isn't the only person to have written a poem backwards.

The domestic abuse charity Refuge released these shocking poems which read one way mean one thing but another way tell a different story.

And if you are interested in dyslexia, then learn more about it here.