Bible Study Brought Them to the Altar, Where They Shared Their First Kiss

If Nessa Egwuatu and Jordan Onuoha got more sympathy than most couples who have had weddings fall through recently, it may be because they had more people sympathizing.

The couple initially had invited around 1,000 guests; the guest list shrunk first because of the coronavirus pandemic. The guest list for the Feb. 21 ceremony in Houston, further sidelined by weather, came to 350 people.

Because of the coronavirus pandemic, the Centers for Disease Control recommends that Americans avoid large gatherings and get vaccinated; Texas has no restriction on gatherings.

There was a sense of anticipation for the many who did attend. Though they have been a couple for years, Ms. Egwuatu and Mr. Onuoha let it be known that they have been waiting for their wedding day to have their first kiss.

Ms. Egwuatu, 25, and Mr. Onuoha, 26, met in Nacogdoches, Texas, in 2014, as students at Stephen F. Austin State University, though their mothers knew of each other in Houston, where both grew up.

A display of Ms. Egwuatu’s Nigerian roots at the start of her freshman year helped acquaint her and Mr. Onuoha officially. One day that fall, she and her roommate, Ashley Eyo, wore matching dashikis.

Mr. Onuoha, on one of his usual skateboarding jaunts across campus, took notice. “Not only were they wearing dashikis, they had painted polka dots on their faces, and Nessa’s hair was blue at the time,” he said. “I was like, OK, y’all are not just regular people. Y’all are Nigerians.” He wheeled over to introduce himself. Which by then had seemed inevitable to Ms. Egwuatu.

“I kept seeing Jordan around campus,” she said. “I saw him so much that I started to feel like, man, I hope he doesn’t think I’m stalking him.”

For reasons she can’t explain, Mr. Onuoha, then a sophomore, stood out. “It was like everybody around me had on a black shirt, and he had on a yellow shirt,” Ms. Egwuatu said.

After his first words to Ms. Egwuatu, which were, “Are you Nigerian?” they established that both had ties to the country’s Igbo people. 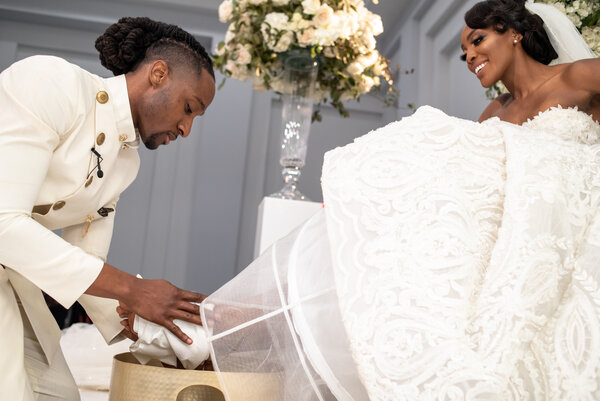 Their parents immigrated to the United States within a few years of each other, around 1980. The Egwuatus, Nwachinemelu Patricia and Akunne Sonny Sr., grew up together in Nigeria.

“When they came to America to go to college they didn’t have a dime,” Ms. Egwuatu said. “But they always had each other’s backs.”

Mr. Egwuatu died in 1999. Ms. Egwuatu is the youngest of four children. “My mom called me her miracle blessing baby,” she said. “The Lord knew my father would be passing in three years’ time and I was able to be there for her.” Her siblings, Brian, Michelle Atanu and Sonny Jr., are 10, 12 and 16 years older.

Mr. Onuoha’s parents, Josephine Akudo Nwankpa and Chidi Chijoke Onuoha, also knew each other in Nigeria but came to the United States separately. In Houston, where both ended up, they hit it off immediately and married shortly after. There they raised him and an older brother, Alexander, and a younger sister, Audrey.

If Nigerian culture was a touchstone for Ms. Egwuatu and Mr. Onuoha, it wasn’t the only influence on their childhoods. Ms. Egwuatu grew up speaking Urdu. “By the time I was born my family was fully invested in their own lives, so I had a Pakistani nanny who taught me Pakistani things,” she said. The nanny, Frazana Rahman, is now a close friend; Ms. Egwuatu and Ms. Rahman still speak regularly in Urdu.

Mr. Onuoha’s family are Seventh-day Adventists, a Christian denomination he had misgivings about by the time he met Ms. Egwuatu.

“It was very strict in its own way,” he said. “We went to church on Saturdays, and we couldn’t eat pork or shrimp. When I got to college, I started reading the Bible and got away from that doctrine.”

But he remained devoted to a deeply spiritual life. Before he met Ms. Egwuatu, he and three friends had formed a Bible study group on campus. During the dashiki encounter, he invited Ms. Egwuatu and Ms. Eyo to join. Ms. Egwuatu was open to spiritual guidance at the time.

“Going back to my nanny being Pakistani, I grew up being a little confused,” she said. “My family saw God and my nanny saw Allah, but they were both worshiping Jesus.”

Through reading scripture in Mr. Onuoha’s nondenominational group, she said, “I surrendered my life to Him. I got so repentful looking at my past life.”

She stopped wearing crop tops and cursing and broke her collection of rap CDs. For a while, she slept with a Bible, like she would a teddy bear.

If Mr. Onuoha was her guide to a fuller sense of God, though, he wasn’t hers exclusively. “I was evangelizing to a lot of people at the time,” he said. A late 2014 outing to a McDonald’s restaurant near campus would help him understand the intensity of their connection. “I couldn’t put my guard up around her,” he said.

He was so comfortable in her company that, as the night wore on and she started falling asleep across the table from him — McDonald’s was the local destination for studying after the school library closed at midnight — his playful side emerged. “I started drawing on her chin with a marker,” he said. “That’s not something I would have done with anybody but her. It was like we were already best friends.”

They would remain best friends until 2018, when Mr. Onuoha said he was visited by a “voice.” In the spring of that year, “I was sleeping, and as soon as I woke up I heard it vividly, as if it were in the room with me,” he said. “It was a calm voice. It said, ‘Go get your wife.’ I believe it was God, of course.”

He wasn’t entirely sure what to make of the command. “I knew I had to submit to it, but I was like, My wife? Could that be Nessa? That felt like a green light to me to move forward, like a prophecy.”

For Ms. Egwuatu, re-evaluating the boundaries of their relationship wasn’t an idea out of left field. “By that time, everybody who knew us and even people we didn’t know would say things like, ‘Y’all should be together,’” she said. This included their families.

Ms. Egwuatu met Mr. Onuoha’s mother on a visit to his house just before her sophomore year. “We became super close,” she said. “And my family knew all about Jordan because when they would call me, we were usually together.”

In May 2018, both graduated from Stephen F. Austin; a change in majors had put Mr. Onuoha on the five-year program. Their graduation doubled as an announcement of their decision to become a couple. They posted a photo of themselves with the caption, “I love you,” on social media.

No one told them they shouldn’t mark the occasion with a kiss. Friends and family actually encouraged them. “Even my mom was like, ‘You need to kiss that girl,’” Mr. Onuoha said. But Ms. Egwuatu and Mr. Onuoha made a promise to each other upon becoming boyfriend and girlfriend to limit their physical connection to holding hands.

“It was our way of honoring ourselves and God,” Ms. Egwuatu added. “People would be like, ‘Y’all are too much friends, you need to add some spice.’ But we’re like, ‘It’s all right, we’ll make it.’”

Mr. Onuoha started thinking about proposing. “Nessa’s older siblings are married and have kids, and they were such an example of what a mature relationship looks like,” he said. “It made me feel like boyfriend and girlfriend doesn’t really mean anything.”

With the onset of the coronavirus pandemic, his urge to marry Ms. Egwuatu deepened. On June 20, 2020, he arranged a daylong scavenger hunt for her, with a final clue in a church parking lot. There, he presented an engagement ring before about 100 friends and family members. Ms. Egwuatu’s ecstatic yes did not end in a kiss or a hug. They held hands.

Six days before their original Feb. 21 wedding date, a winter storm slammed into Texas. Out-of-town guests had to cancel flights. Then the couple got word that the warehouse storing their decorations had been flooded, and that because of widespread power outages, their wedding cake couldn’t be made and food for the 350-person reception was doomed to spoil.

“Everything crumbled,” Ms. Egwuatu said. “It was like: bam, bam, bam.”

Still sturdy, though, was their will to marry Texas style. On March 6, Ms. Egwuatu and Mr. Onuoha and their 350 guests, including 11 bridesmaids and 10 groomsmen, gathered at Houston’s Holy Trinity Cathedral for a retry.

The couple maintained that it was important for them to have a big wedding. Ms. Egwuatu was the last of her siblings to marry, while Mr. Onuoha was the first.

“A big thing we said to multiple people is to not feel pressured on attending our wedding as we understood the current state of the world,” Ms. Egwuatu said. “Instead we provided comfort to those who were conflicted in their decision. It wasn’t about the numbers to us — our joy was never based on the outcome. However we ultimately wanted those who could, to celebrate the faithfulness of God with us and truly honor what He has called forth. For most, it was a moment they said a virus wouldn’t allow them to miss and for that we were grateful.”

Gov. Greg Abbott had issued his executive order lifting the state’s mask mandate by the day of their wedding, but guests were still required to wear masks and sign a waiver indicating they were Covid-free.

The event company behind the wedding, Dure Events, required temperature checks before the ceremony (though these are not a useful indicator of coronavirus illness), and made sure hand sanitizers were plentiful.

Anthony Smith, a pastor at Houston’s Tabernacle of Meeting Church, performed the ceremony preceded by a demonstration of biblical humility. Instead of bouquets, the bridal party carried jugs of water to a towering altar draped in greenery and white flowers. Mr. Onuoha used the vessel in which the water was poured to wash Ms. Egwuatu’s feet.

In handwritten vows, Ms. Egwuatu told Mr. Onuoha he had taught her patience, and to love fearlessly. “You are Jordan, the river that doesn’t run dry,” she said through tears. “You restore my soul,” Mr. Onuoha said.

To hollers of “Amen!” from the crowd, he added, “I practice self control because of you.”

As Pastor Smith pronounced them married, a hush of expectancy settled over the room. When the couple leaned toward each other, then pulled back, applause broke out. As they finally pressed their lips together and held each other tight, cheers and shouts erupted.

Despite the commotion, neither was in a hurry for their first kiss to end.

Winning Combo After the ceremony, guests drove to Signature Manor, a Housing wedding venue, for a cocktail hour and reception. The bride and groom made their debut as a married couple Jekalyn Carr’s “You Will Win.” When the party was over, they readied for a next-day honeymoon flight to Aruba.

High Standards Nathan Warner, a friend from college and one of the groomsmen, said the couple’s self-control when it came to intimacy before marriage has been a calling card. “It’s rare to find anything like it in this world,” he said. “But that’s Nessa and Jordan for you.”

The Follow Up A couple of weeks after the ceremony and reception, the couple followed up with guests to check on their health. “Yes we have followed up and have been getting good news all around,” Mr. Onuoha said. The couple said they are not aware of anyone contracting the virus.