The 36-year-old has had to leave her old life of selfies, Instagram and short skirts behind. 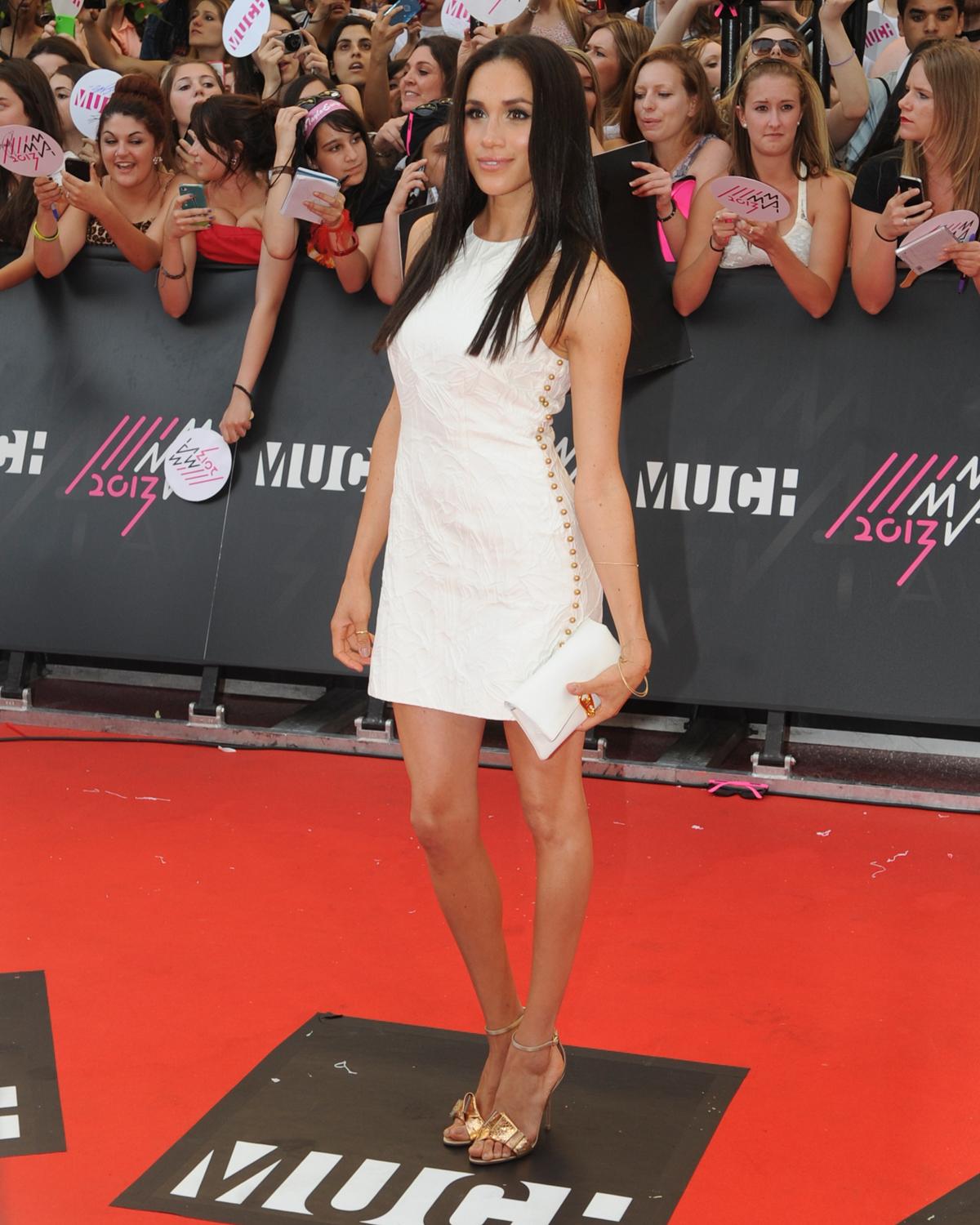 Now there will be balls, tiaras and palaces with her real-life Prince Charming.

As Meghan adjusts not only to married life, but being a fully paid-up member of the Royals, one of the biggest public changes she will have to make is her wardrobe.

The world gushed over her two wedding dresses, one by Givenchy and the other by Stella McCartney.

And as Meghan stepped out on Tuesday for her first public appearance as a full Royal, all eyes were on her outfit. 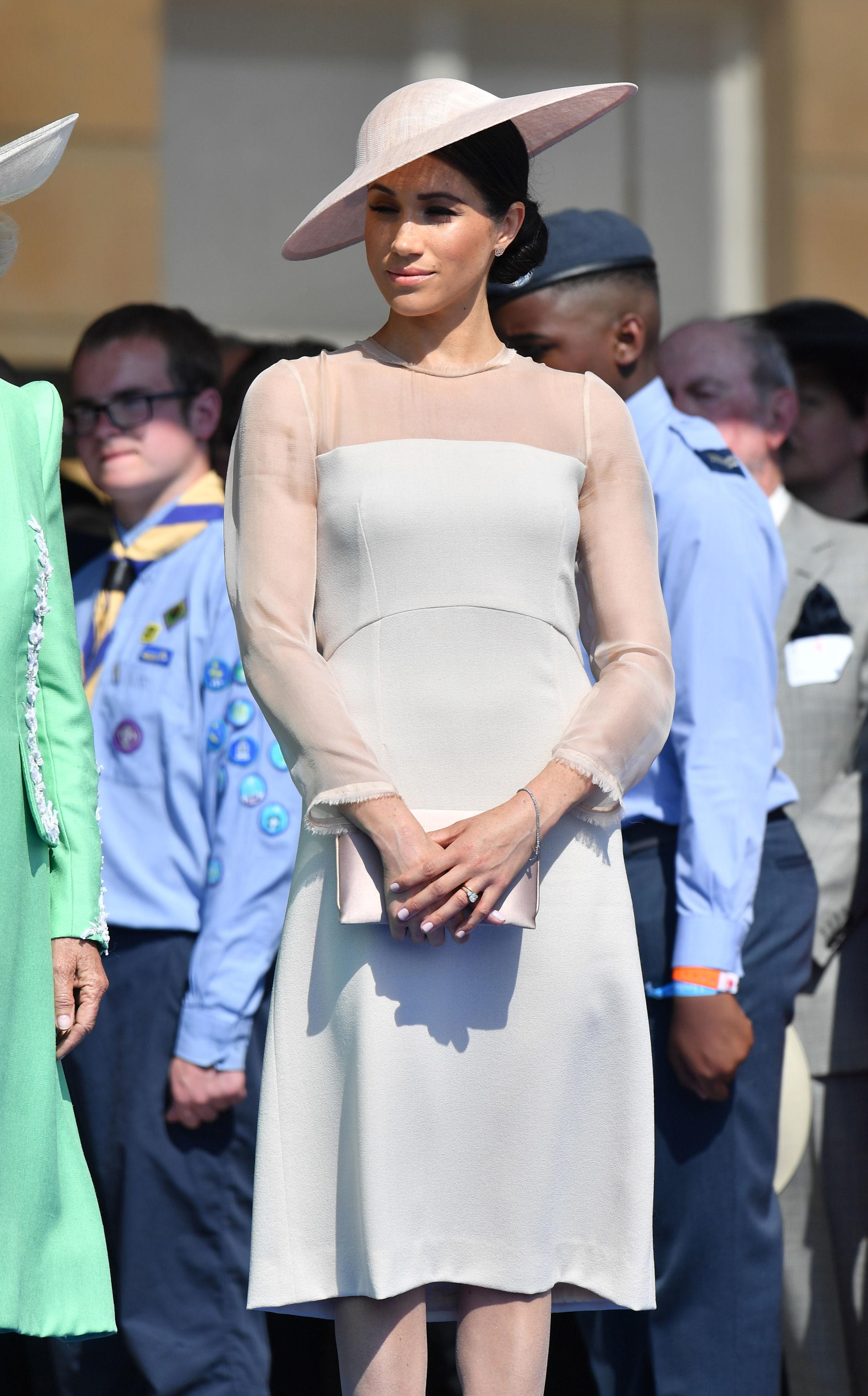 The former actress cut a demure figure, dressed in a below-the-knee dusky pink dress by designer Goat, and costs £590 from Matches Fashion.

The new Duchess of Sussex paired the Flavia silk-crepe pencil dress with a £205 oyster silk clutch, and a wide-brimmed Philip Treacy hat.

And she finished it with a pair of lush pink Tamara Mellon shoes and pale white tights.

The look is a far cry from her previous outfits, featuring shimmering short dresses, strapless numbers and showing a fair chunk of leg.

Not forgetting Meghan was the face of Canadian retailer Reitman’s leather collection, which showed Meghan sizzling in leather skirts and trousers.

It’s likely we’ll never Meghan in such daring outfits again, and this is why…. 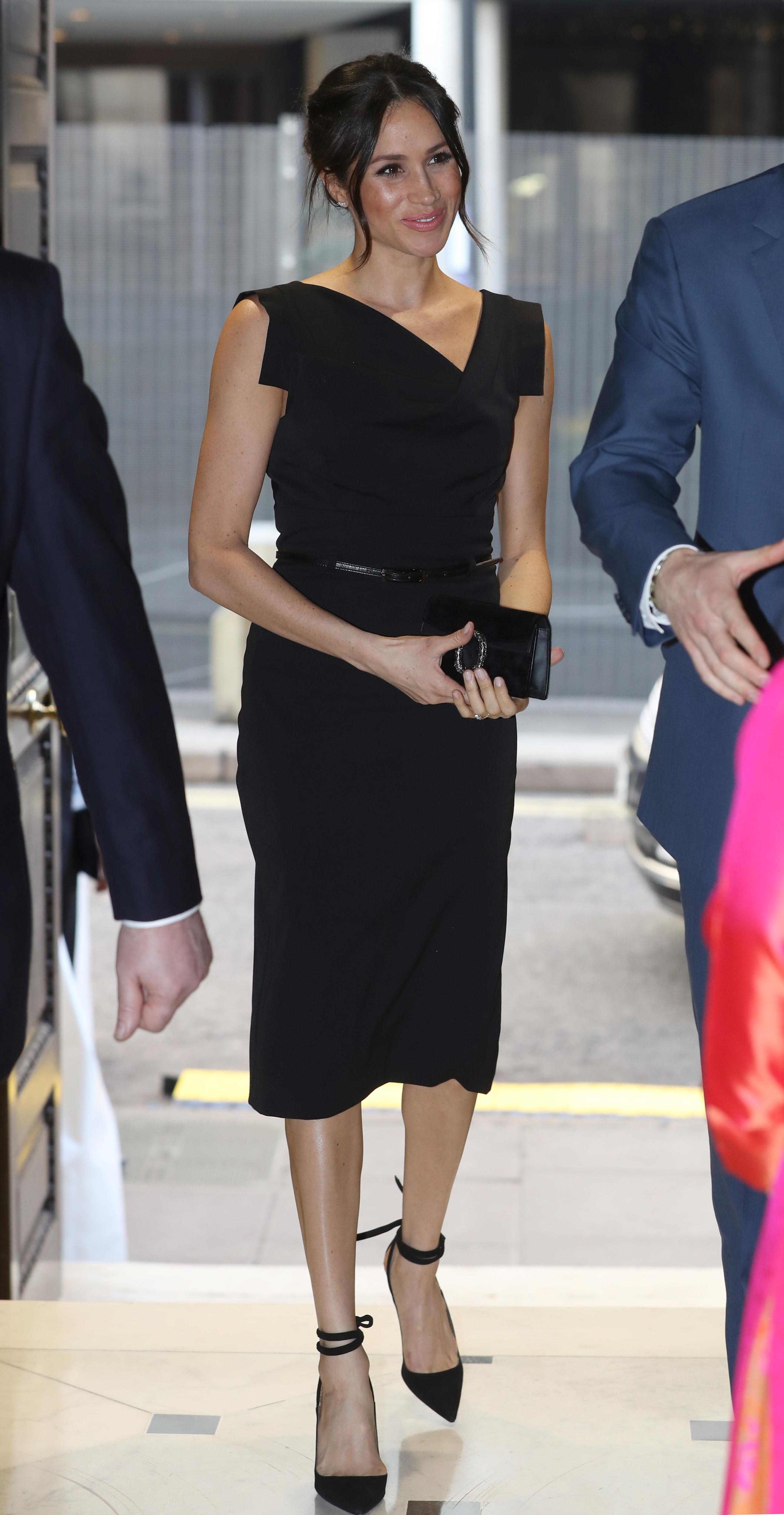 Rule 1: Must have a black outfit packed

This will apply whenever she goes travelling and there must be a black outfit packed with her things.

This is in case a senior member of the royal family dies suddenly, and the other royals must be in suitable attire.

This stems from the Queen’s own personal experience, as she was abroad when her father, King George VI passed away.

As she had no mourning attire, she was forced to wait on the plane when she returned so a black outfit could be brought to her.

Meghan is fan of a hat, seen wearing a selection over the years including baseball caps, beanies and fedoras.

And despite rocking a few while out on official and unofficial appearances with Prince Harry, they must be off by 6pm.

A royal rule is strictly no head gear other than a tiara can be worn past that hour.

Now Meghan’s part of the family, she’ll have to stick to that too. 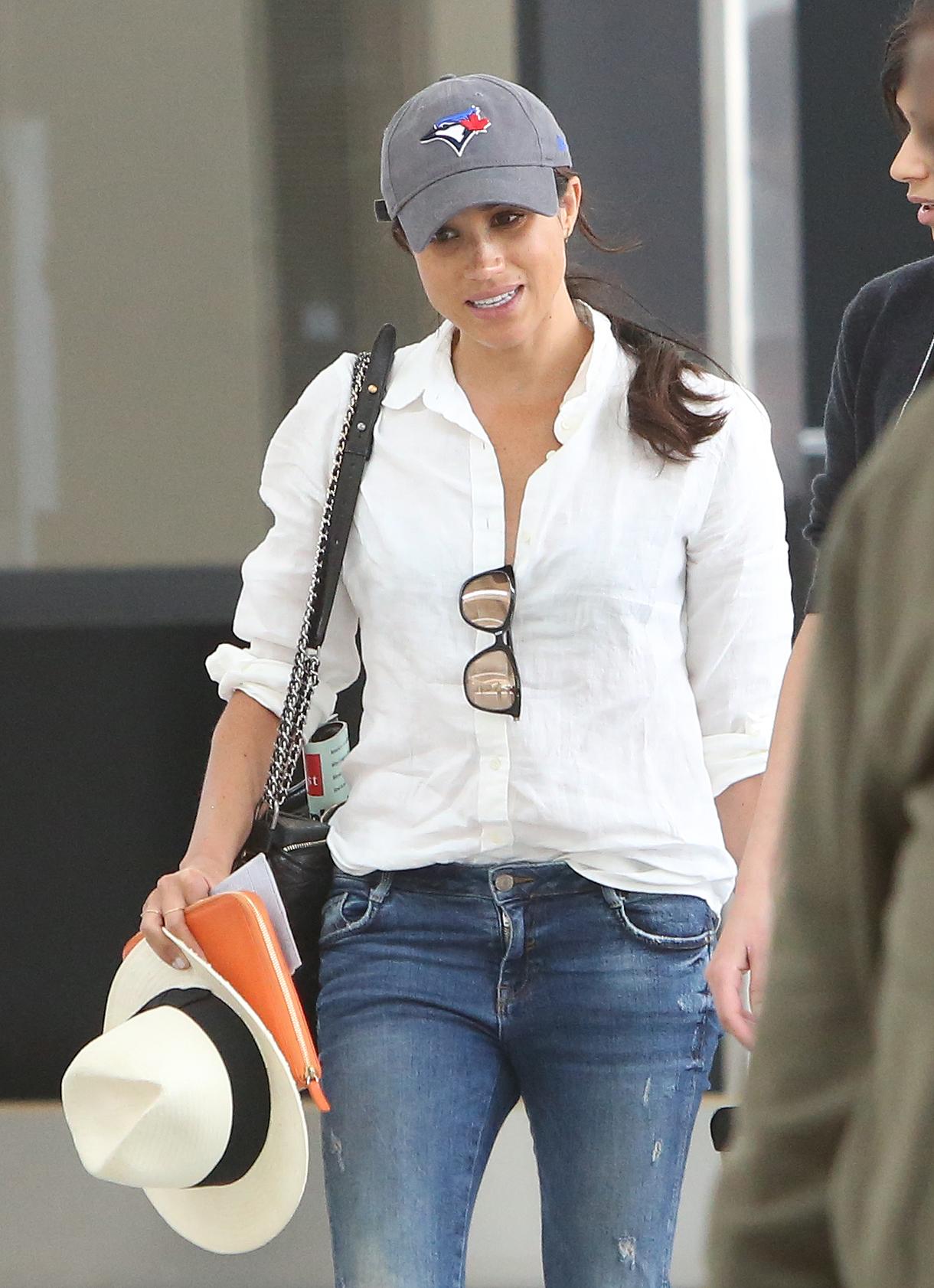 It may seem like a small detail, but dark or colourful nails are banned.

In her engagement photos and at her wedding – when all eyes were on her hand – Meghan sported a pale pink colour.

But this is the new norm, as it’s said the Queen has a rule that royal women should stick to pale, natural and light shades only.

This a long-standing rule dating back to the 14th century, when King Edward III banned all royals from wearing fur.

But The Duke and Duchess of Cambridge infamously broke this when they wore fur scarves while on a tour of Canada. 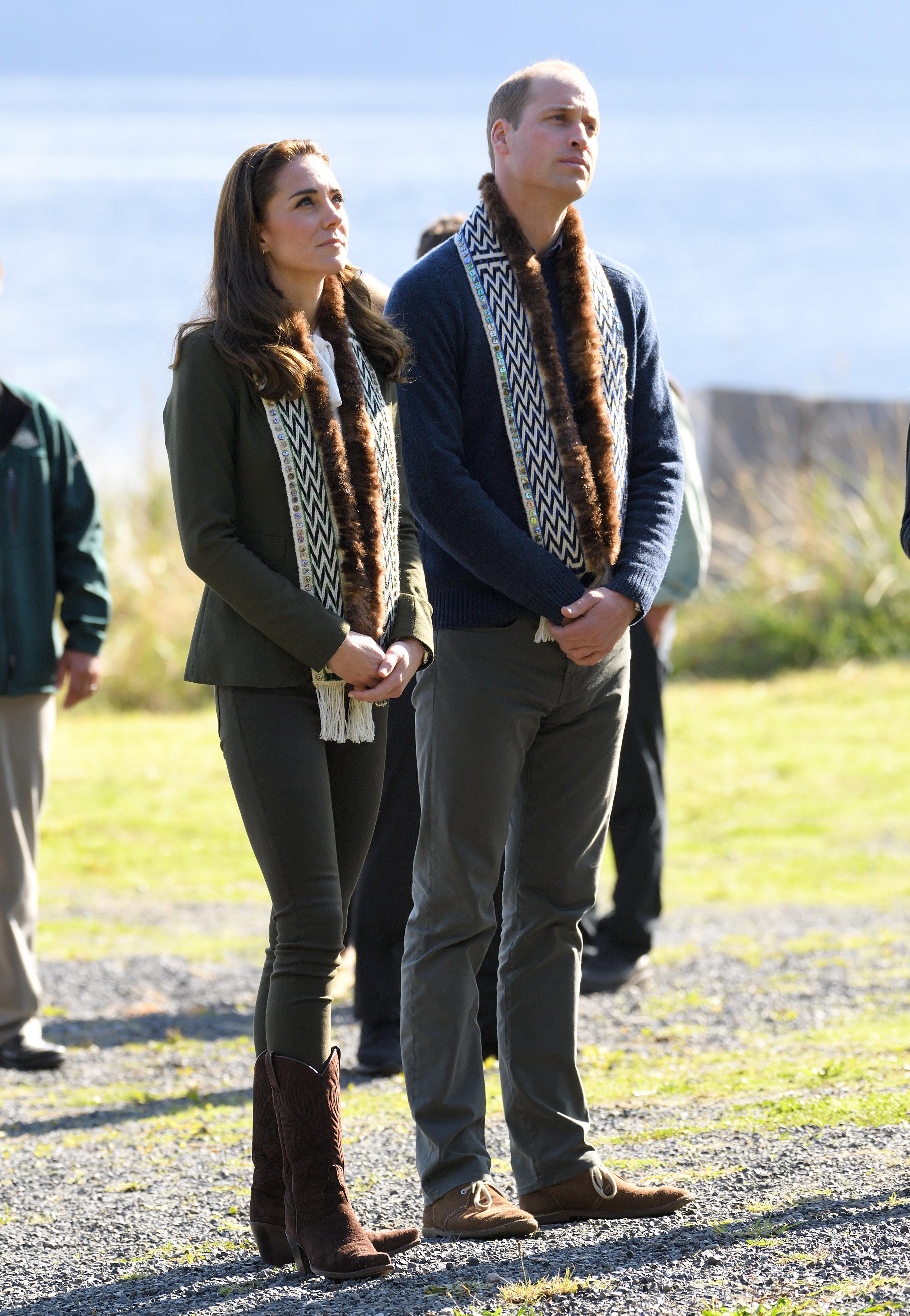 Rule 5: Must wear weights in their dress hems

It seems Kate Middleton has fallen foul of this rule, with cheeky gusts of wind blowing up the Duchess’ skirt, revealing more than she bargained for.

To avoid royal women having a Marilyn Monroe moment, it’s said weights are sewn into the hem to stop it flying up in the breeze.

It’s said no matter the weather, a royal female must wear a pair of nude tights.

That could explain why, on her first public appearance as a Duchess, Meghan opted for an odd pair of white tights.

The temperature may have hit the twenties, but the American’s legs were firmly under wraps.

She did break this rule for their engagement photos, but as she wasn’t technically a member of the Royal family as this point, it’s a grey area.

Meghan Markle’s wedding dress and tiara – how much did it cost and who is the Givenchy designer?