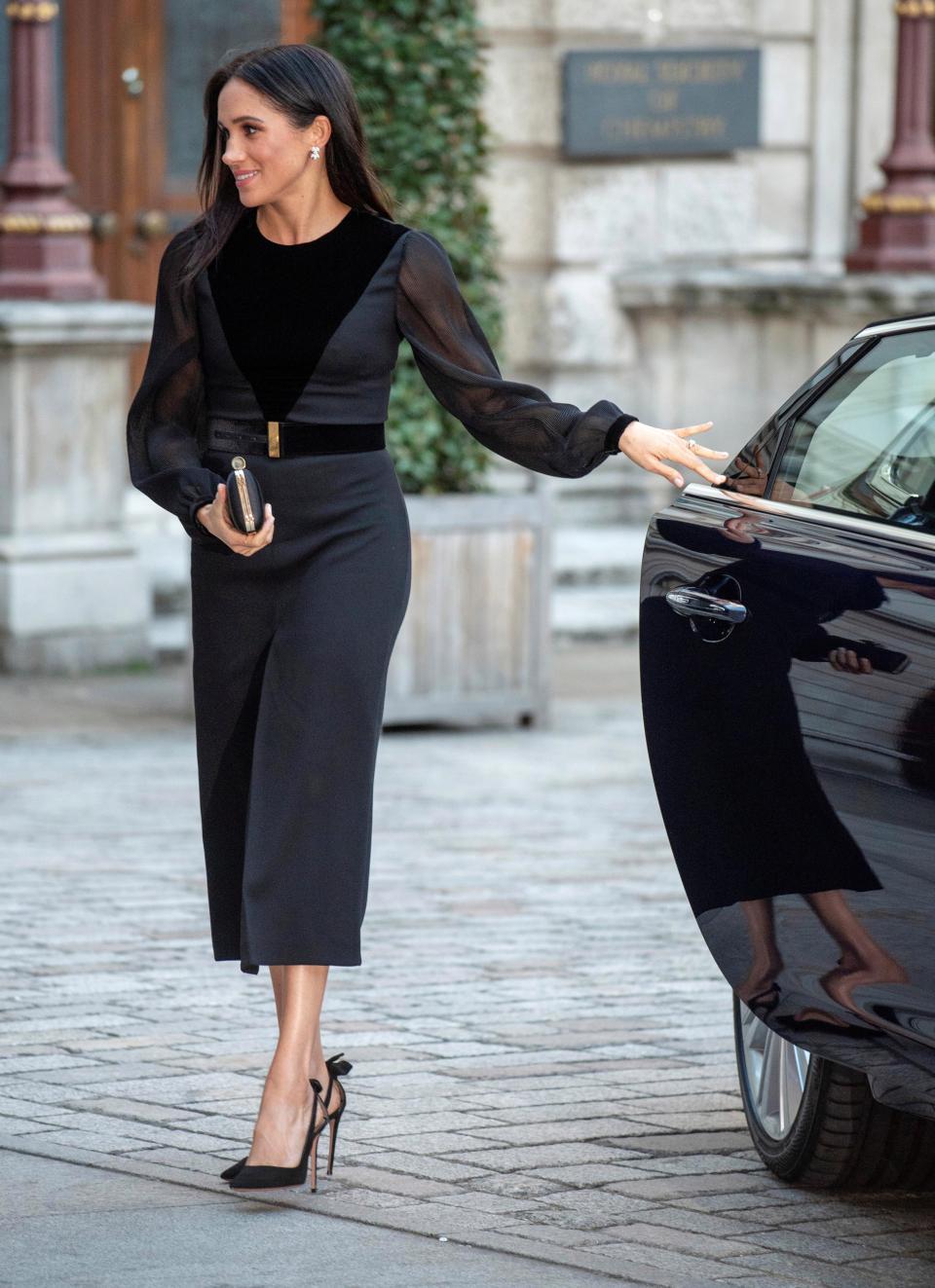 Both Kate and Meghan love a clutch bag but the very confident Meghan usually carries hers tucked away at her side.

Here though it came into use as a cut-off barrier of the kind women often use when they are aware speculation about a pregnancy is rife and they want to deflect eyes away from their stomachs.

Keeping the exciting news a secret can produce subliminal covering rituals like this. 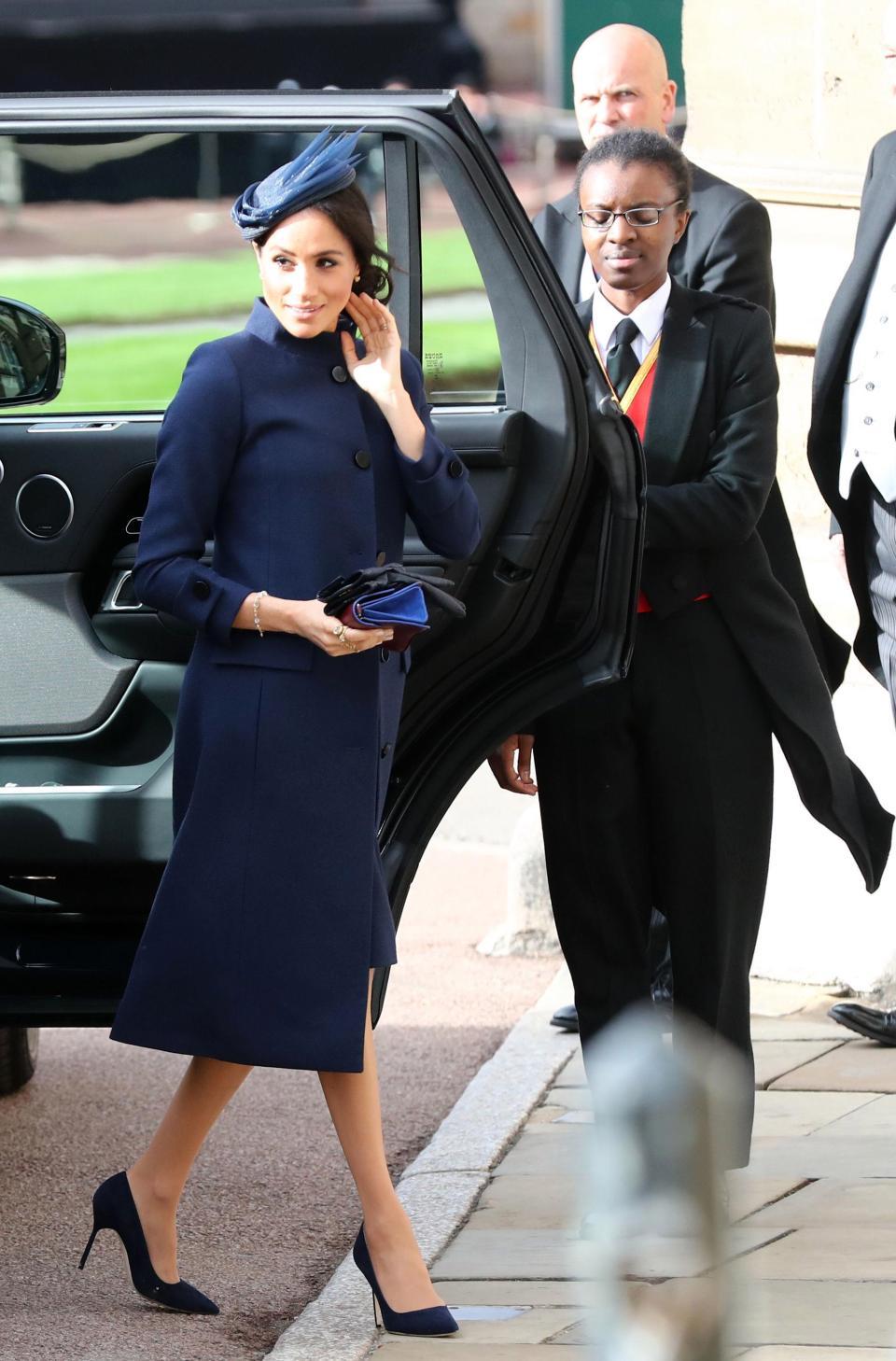 When Meghan emerged from the car at the wedding it wasn't only the open coat providing clues of a pregnancy.

Here she's brought both that clutch bag and a pair of gloves into play as barrier props, while the one hand touching her face looks like a slightly self-aware self-comfort gesture. 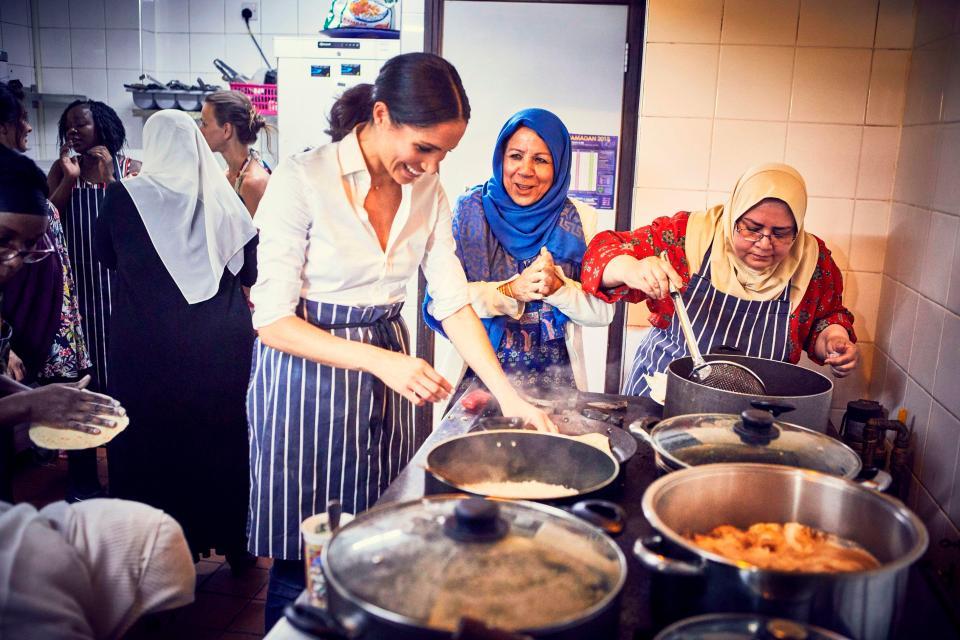 When Doria turned up in the UK she immediately took to her daughter's side like any protective mother, while Harry walked behind looking uncharacteristically shy.

The biggest clue though was Meghan's hand-over-the-stomach-area gesture.

This self-conscious trait was the biggest clue from a woman who normally never needs to use low confidence barrier gestures. 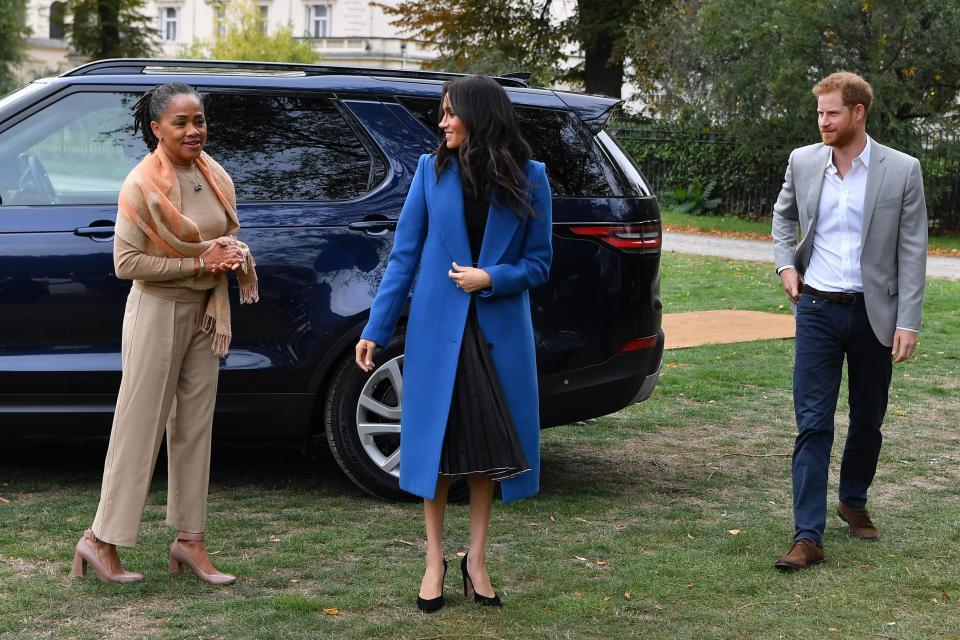 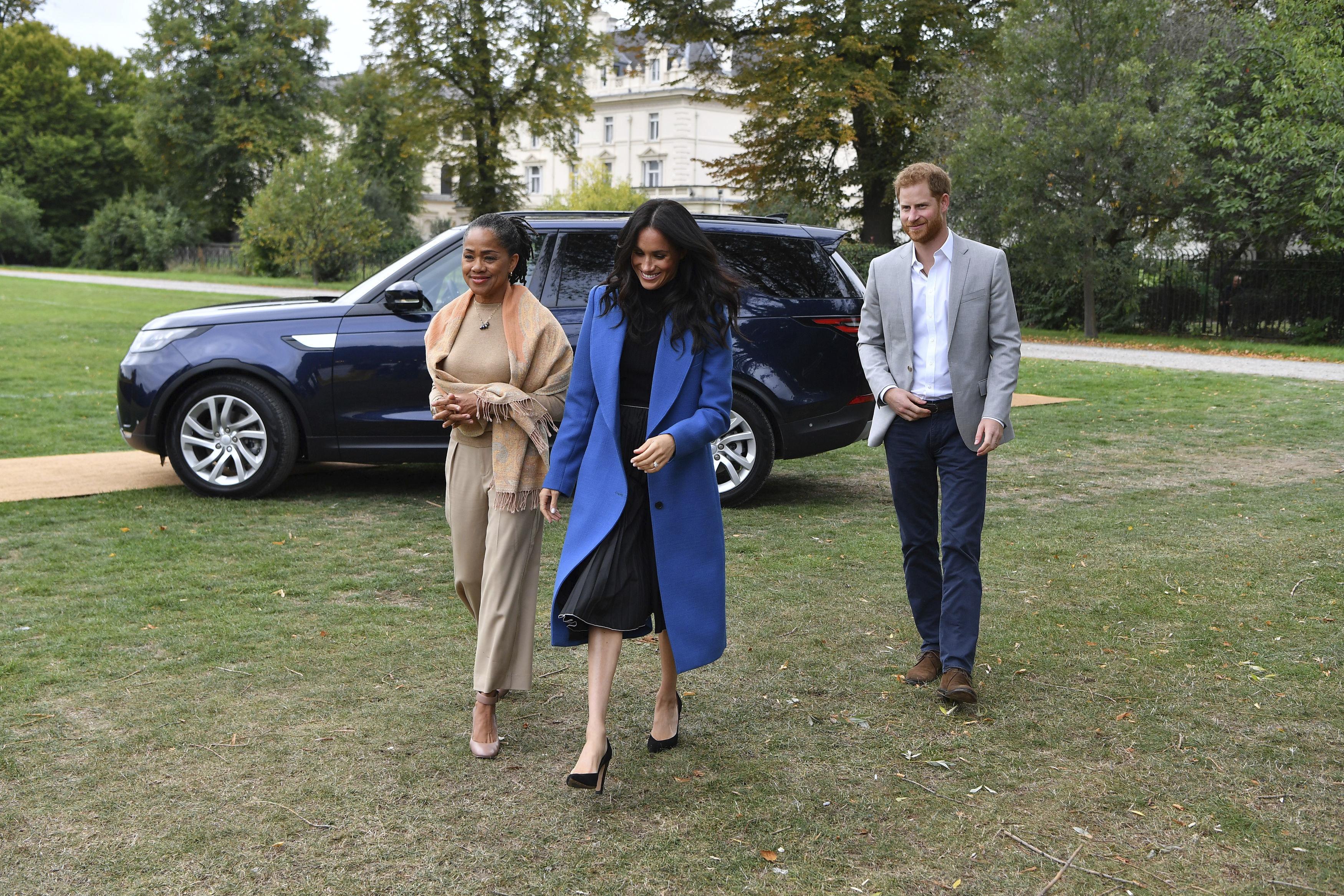 Amusingly it was also mirrored by Harry who mimicked the hand to waist look in a way that many first-time dads hiding the pregnancy secret can tend to do.

She also tied the strings of her apron in this 'skimming the top of the bump' way, suggesting she was keen to not pull it tight over her normally slim waist. 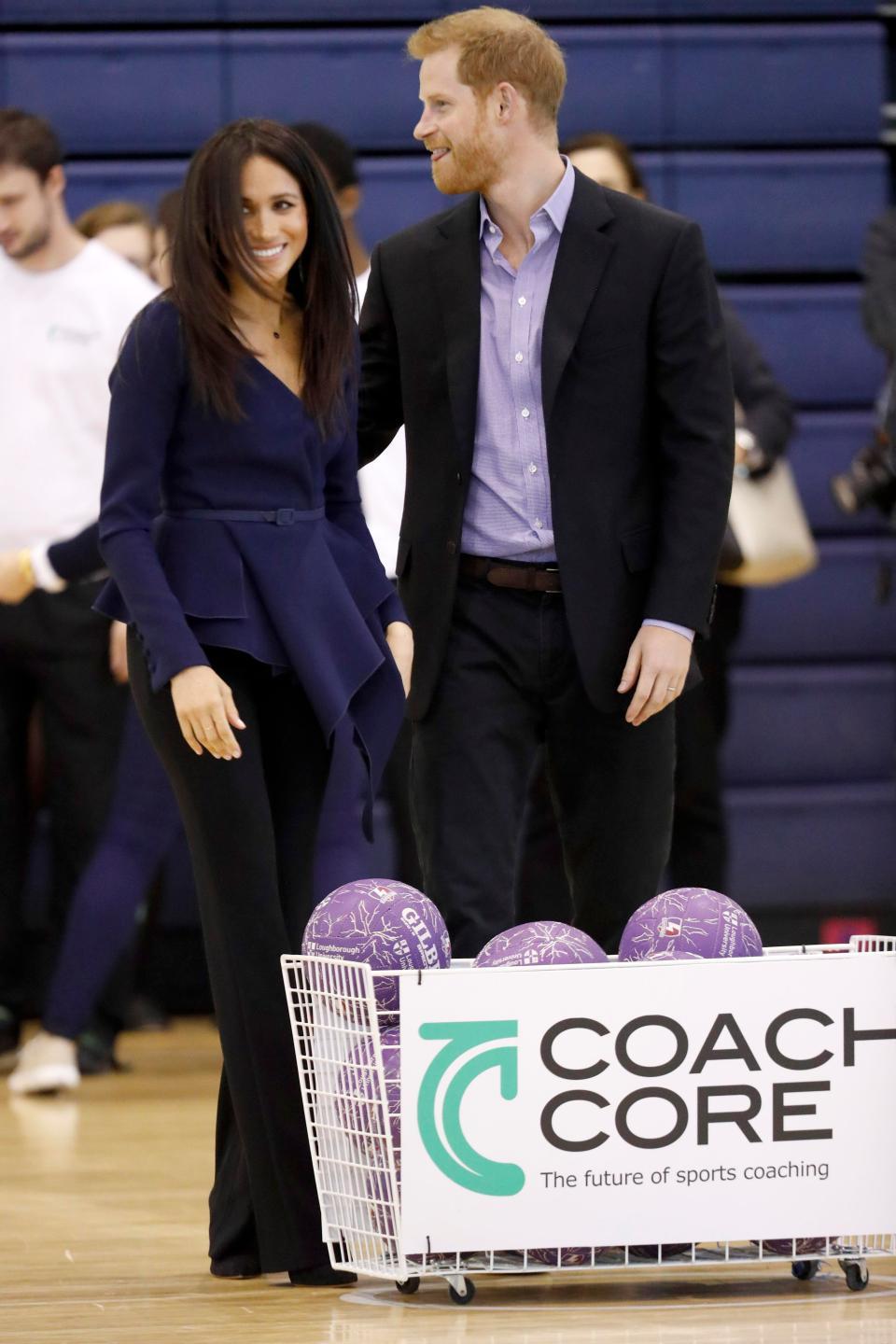 Another example of Harry's newly-protective rituals, placing a loving arm around his wife's back while she performs a rather sweet and shy-looking smile.

The couple have been producing some role-reversal body language displays.

They are always romantically tactile but it was more likely to be Meghan doing the reassuring, steering and loving back-touches on Harry when they are on royal visits.

Suddenly it has been Harry using the rather protective body language rituals on his wife, like this back-clasp here as she climbs a set of stone steps in very high heels. 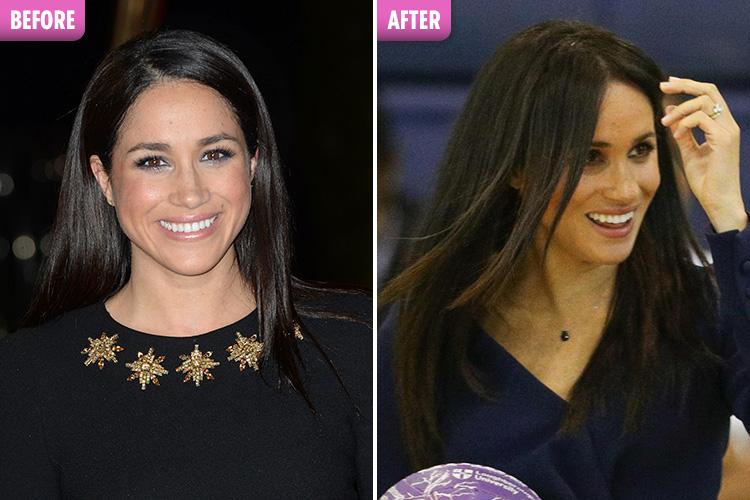 So millions of other new mums weren't wrong.

Many of them recognised and identified Meghan's less glossy, frizzier look as a sign she could be pregnant and had changed her style so as not to use the chemical relaxers she has used in the past.

Using her legs as a distraction 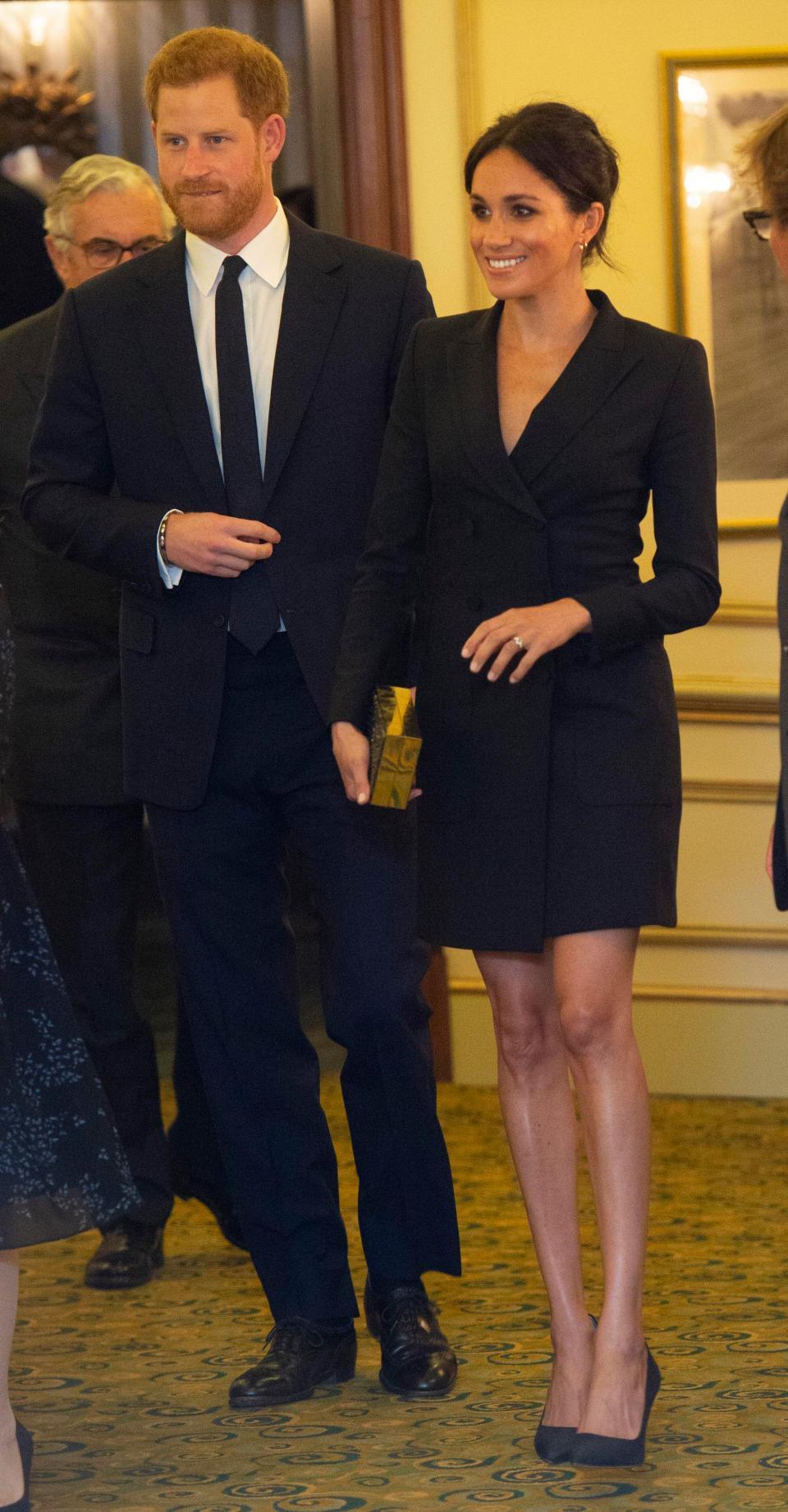 Meghan looked stunning in this simple black tux at their visit to Hamilton but it was a noticeably shorter than style than we'd seen her wear before. The look might have been a deflection technique, as in: 'Look at the legs, not the bump!' plus her ring hand was very obviously raised over the bump as a second deflection trick.

Leather skirts are notorious for riding up your hips as you're wearing them but this bottle green number looked deliberately designed to be high-waisted and cleverly fitted, with the blouse hanging out to hide the wider waistband.

THAT blue dress with the huge bump in front.

We were told the large tummy-bump caused by this dress was down to Meghan being caught at a bad angle by the cameras.

While it was true the wide rippling frill that ran down the front of the skirt could have created a bit of an optical illusion, the fact that the normally sleek-dressing Duchess opted for this much baggier, shapeless number complete with stomach-covering front detail should still have been a bit of a clue about her news. 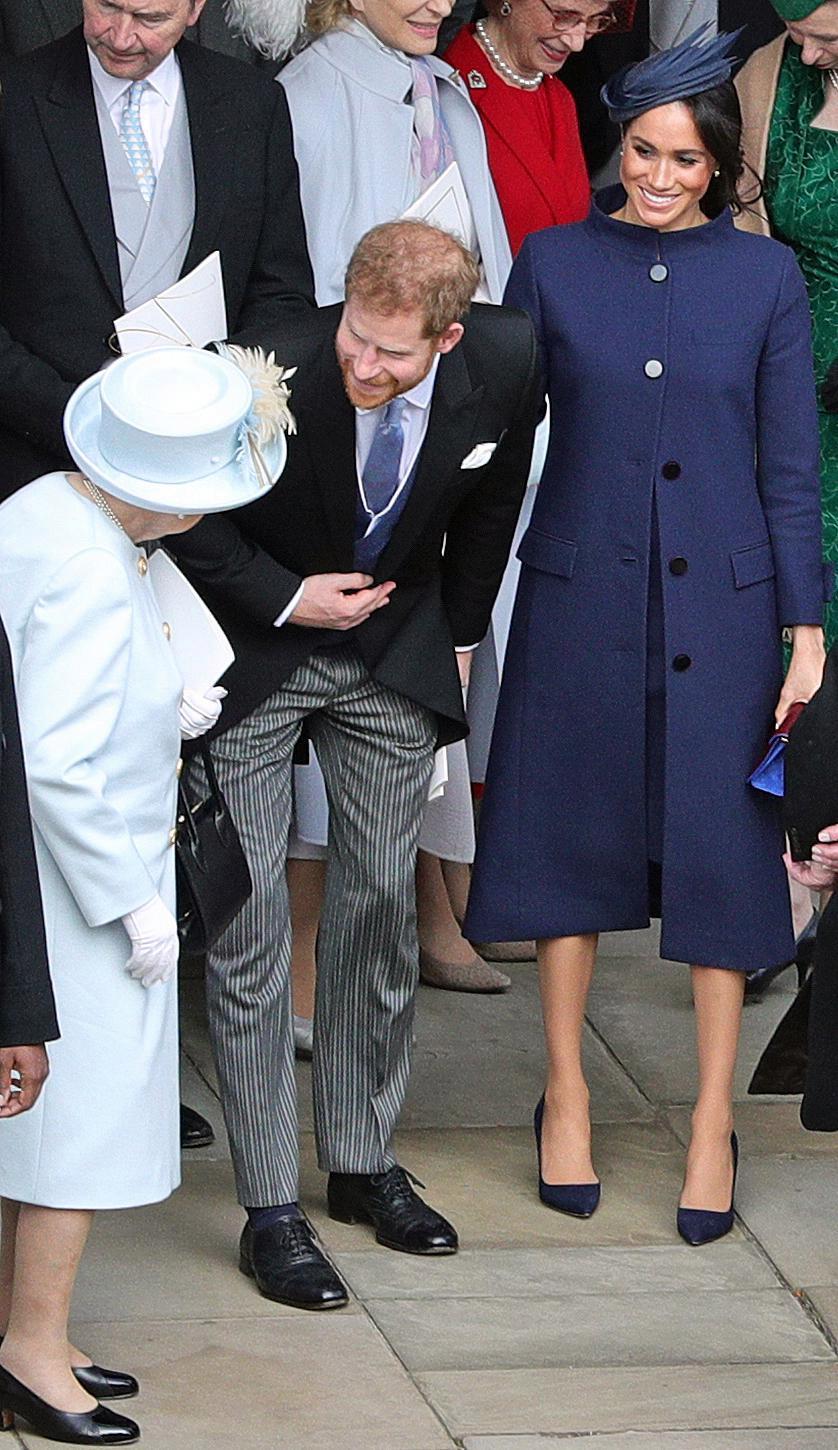 Some high-end designers do tailor coats to be worn falling open at the front to reveal a matching skirt or dress.

The quite generous cut of this coat showed it was intended to be worn closed and fitted though, suggesting Meghan had left the lower buttons open for comfort and to mask any signs of a bump.

Meghan has always had a love of chunky, masculine-style tailoring but always worn cinched with a wide, feature belt.

This coat is worn hanging open and shapeless though. 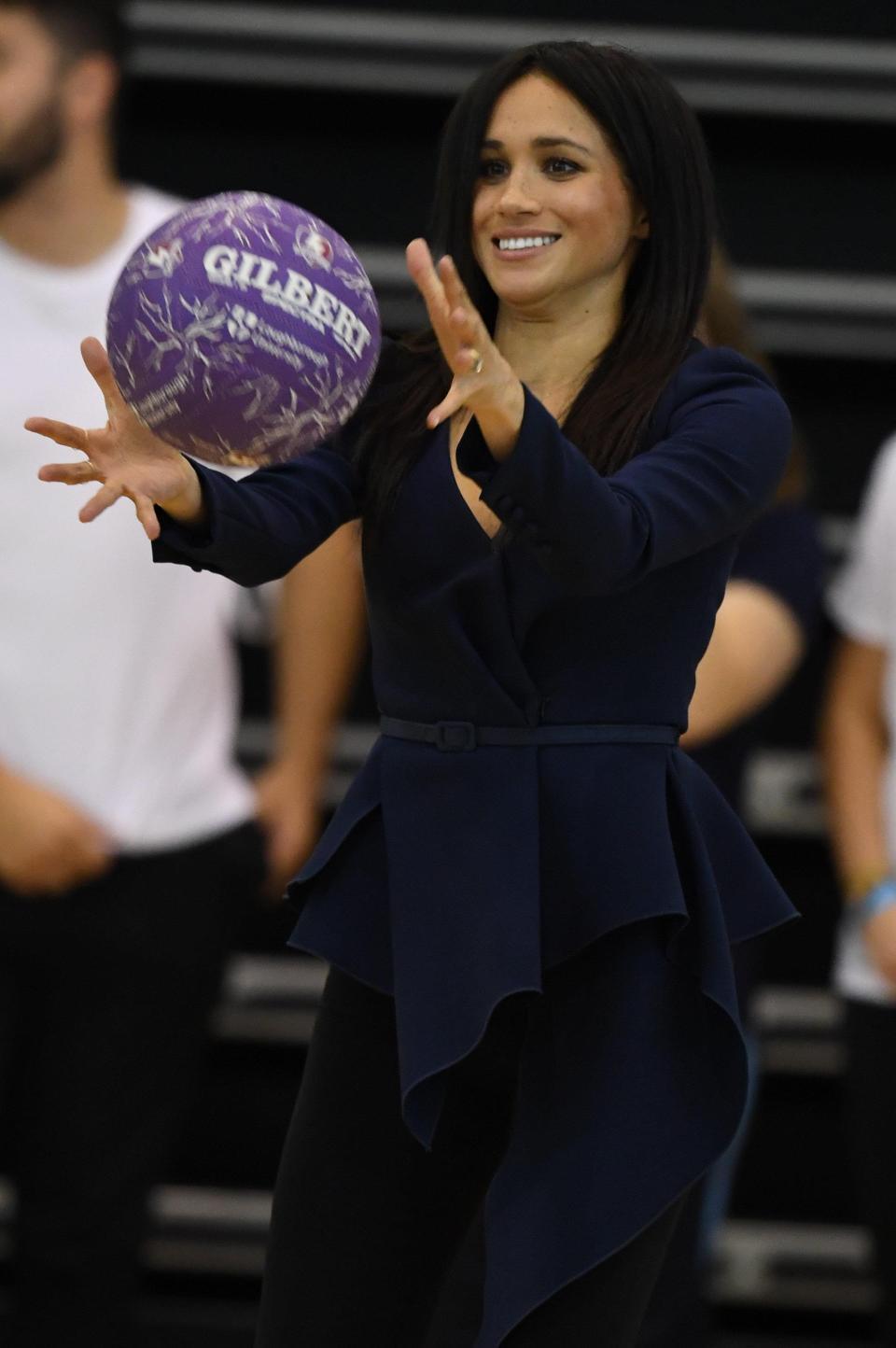 This peplum top was one of Meghan's biggest give-away with the strategic folds at the front being bundled with a comfortable narrow belt.

Meghan also developed an un-characteristically sheepish approach to the sporting activity here too.

When a ball was thrown at her she caught it gingerly with spiked fingers and a slightly worried facial expression as though defending herself from it rather than being competitive.

The happy couple were spotted holding hands and beaming hours before the news broke of their baby joy.

Fans have been speculating over whether the baby was conceived on the Duke and Duchess' mini-moon to Dublin.

And Meghan and Harry have come under fire today by announcing their baby news on International Pregnancy and Infant Loss Remembrance Day.