Brit mum freaks out after finding THIS terrifying creature on her patio… so do you know what it is?

The brown creature was pictured on a Mumsnet thread next to the caption:  "For the love of all that is good and natural, PLEASE tell me what this is!" 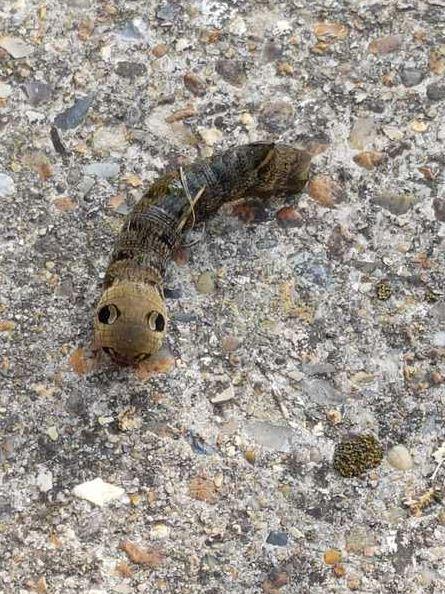 "It was on the patio this morning but it's now in the bushes and I need to know a) what it is and b) whether it is harmful to cats . Suffice to say, I'm never going in the garden again!"

She went on to explain it was a "couple of inches long" – and threatened to burn down her garden.

People came up with their own suggestions – with some other people admitting they too were repulsed.

One woman said: "I hope for the sake of my heart and grey hair one doesn't chose to live in my garden!"

Another person added: "It is terrifying-looking. Really creepy and scary."

But other mums revealed it was a  elephant hawk moth caterpillar.

BiscuitMachine said: "The moths are beautiful but I’ve never seen one in the flesh, although we have had plenty of the caterpillars over the years.

"As well as fuchsia they like rose bay willow herb – we have lots of it as our garden is (ahem) wild in places.

"The eye and mouth markings are for defence. My girls even had one living in a box in the conservatory a couple of years ago."

It was on the patio this morning but it's now in the bushes and I need to know.

According to the Royal Horticultural Society, the elephant hawk moth measures 85mm.

The society said: "The brown or green caterpillars with black and pink eye spots and a small black horn on the rear end. Usually found in late summer to early autumn. Extensive damage to garden plants is rare, but caterpillar feeding does cause some defoliation.

"The English name of this insect is derived from the shape and behaviour of the caterpillar.

"The head and thorax are distinctly more slender than the rest of the body and, this can be said to look like an elephant's trunk.

"When alarmed, the caterpillar pulls its head into its thorax which becomes swollen; this causes the two pairs of eye spot markings at the front end of the body to become more prominent. This gives the impression of a large false head, a defensive mechanism thought to make the caterpillar look snake-like and unappetising to its predators."

Previously, a mum was torn after finding out her friend who has three kids is gay… so should she make him tell his wife?

Need more Mumsnet problem solving? What would you tell this woman with a relative who quit their job and now wants to borrow £5k from them?

This mum wanted advice about getting pre-childbirth fake tan and eyelashes.

And the mums saw red when one user asked if only CHAVS put their babies in headbands.