Can Roger Federer Break a Sweat? 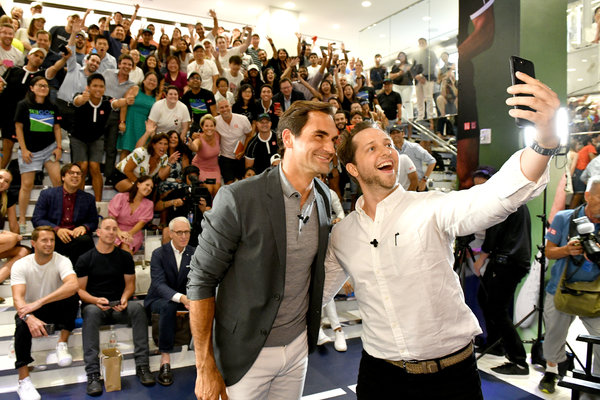 Can being relatable be considered a superpower?

It was steamy dog day afternoon at the Uniqlo flagship on Fifth Avenue. At the center of the mezzanine sales floor a curtained booth had been constructed for a round of press interviews preceding a question-and-answer session.

Attending this event was a horde of Federer fans, a number of whom had lined up and camped out overnight in hopes of finding themselves in the presence of a tennis luminary whose statistical accomplishments are so overwhelming and have been so much rehearsed across the last two decades that eventually they were collapsed into the acronym GOAT — for “Greatest of All Time.”

Mr. Federer, who is Swiss, may be that. He is surely the most elegant and balletic athlete on the pro tennis circuit. He is also, assuredly, the richest.

That is largely because he is what his biggest groupie, as the Vogue editor Anna Wintour calls herself, once termed an incredible businessman — one who, when he left behind a two-decade-long relationship with Nike in 2018, segued into an even more lucrative deal, a 10-year contract with the Japanese retailer Uniqlo widely reported to be worth $300 million, that will carry him well past his playing years.

But of course he is still very much in the game. “At some point, you probably ask yourself how much more can you squeeze from the lemon,” Mr. Federer said on Tuesday, although that point seemed very far off.

Mr. Federer turned 38 this month and yet up close appears a good deal younger. He is, unsurprisingly, very fit. He is 6-foot-1, weighs 185 pounds and has a 33-inch waist, and was dressed that day in Uniqlo white slim-fit stretch jeans and a charcoal blazer in size 40 regular and long-sleeved fine knit merino wool polo in a medium.

Although the retail cost of Mr. Federer’s outfit amounted to exactly $148.50 — not counting the size 11.5 Common Projects Achilles sneakers and the Rolex Daytona — he managed to make the clothes look like a million bucks. Presumably that is part of his endorsement value.

There is something else. Although one may imagine Mr. Federer had wearied, after 22 years, of responding to queries posed in so unvarying a “Groundhog Day” loop that he once remarked that there was nothing about him left unexplored, he has an ability that is rare even among the occupationally famous. His ready laugh and amiable presence are deployed to make interlocutors imagine they are posing questions he has not heard countless times before.

And he has an ability to produce replies that, disarmingly, sound as though they were not generated by an internal save-get key. In the routine serve-and-volley of an interview, this makes Mr. Federer challenging to read and harder still to game.

All the same, it is likely accurate, as Mr. Federer stated on Tuesday, that while he had previously feared fashion, he had come around organically; and that it was his wife, Mirka, and not Ms. Wintour who helped him develop his signature low-key personal style. (“Anna never gave me much advice except to feel comfortable,” Mr. Federer said.)

It is also true that when he reflects on a period in his early career when he favored a cringe-worthy, hip-hop-adjacent wardrobe of baseball caps and XXL hoodies, it is with a retrospective sense of humor. (“What can I say? It was not a good look. I went out and made my mistakes and eventually found my style.’’)

And when he said his personal men’s wear icon is the designer Tom Ford, it was for a logical reason. That is, when you dress for success, it is important that you do so convinced of the outcome.

As is the case of everyone on the tennis circuit, it is the months spent on the road that truly dictate Mr. Federer’s wardrobe. He said that for eight-week stints of nonstop travel he takes along three pieces of Rimowa luggage, one each for tennis clothes, off-duty outfits and his rackets.

“You need things that mix and match and that you don’t have to think about too much,” he said, which may help explain why you have never seen him wearing polka dots. (He did, however, turn up at the Met Gala one year in a Gucci tuxedo embroidered on the back with a big crystal cobra.)

To create the outfit he plans to wear to the U.S. Open beginning on Monday — it is already on sale at Uniqlo — Mr. Federer spent part of the last year collaborating with a design team headed by Christophe Lemaire, the French designer who honed his skills at Hermès. For night play, at least, Mr. Federer will wear black shorts and a white-banded Henley said to have been inspired by a tuxedo.

“It’s New York at night, and you want to show your best,” he said of what may be the ultimate expression of occasion dressing.

More typically, it is locker room realities that decide the attire players pack on tour. “People think we have big dressing rooms, but we have a little corner and two minutes to get ready,” Mr. Federer said. And of course, weather conditions like those that afflicted players at last year’s U.S. Open also influence choices.

“We took some lessons from that experience,” he said, referring to the self-wicking fabrics later used in producing a line of Uniqlo’s so-called life-wear and the fact that he may have gone through as many as seven shirts a day during the swampiest hours of the 2018 tournament.

“I’m kind of famous for not sweating so much,” said Mr. Federer, who speaks five languages fluently if, on occasion, in an eccentric manner. “Arthur Ashe last year might have been the most humidest place ever.”