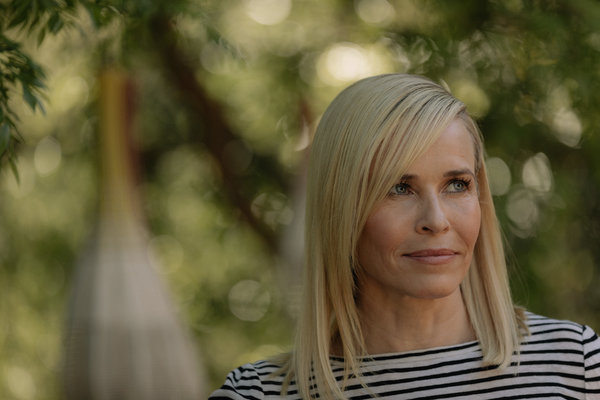 Thirsting for some real beauty talk? Chelsea Handler is ready to dish. Ms. Handler, 44, has a new book, “Life Will Be the Death of Me,” which will be out April 9. Here she shares her favorite beauty products and explains why the pressures of Hollywood aren’t a reason to completely change your face.

I don’t really cleanse or wash my face. I know that you’re not supposed to do that. But I think whatever it is I’m doing, it’s working, so I don’t want to rock the boat.

First thing in the morning, I wipe my face with these Peter Thomas Roth Un-Wrinkle Peel Pads. They’re on my nightstand. At night I use Almay skin wipes to take off my makeup. I don’t splash water on my face ever. In the shower it may get wet and that’s it.

Then I have this Superskin concentrate by Liz Earle. It’s made with argan oil and natural source vitamin E. I put that on all day long — anytime I feel dry. They say oil clogs your pores, but I have no pores, so it’s the perfect skin serum for me.

A couple times a week, I use this little face roller with tiny needles in it. It’s about injuring your skin in a very small way. My cousin tried it and said she was literally bleeding. That’s going too far. I don’t know if you see a difference right away, but it makes your skin more alive.

I have very dry skin, so I put the Liz Earle Superskin moisturizer on top of everything, and I do that morning and night and probably one more time during the day. Basically I’m walking around L.A. all day with really shiny skin, but I’m actually just hydrating. But that’s O.K. because in L.A. everyone’s a hot mess. I never had allergies before I moved here. Everyone’s got issues.

I found this company Nudestix that I ended up investing in. It’s animal friendly, and it has all these sticks and tubes, and you can use things for multiple parts of your face. It’s basically makeup for dummies.

I carry four things around with me, and I’m done for the day. One is a blush brush by Nudestix in the color Sun Kissed. One side is a tube of color, and the other side is a brush. I put it on my cheeks, lips and as an eye shadow.

Then I have my Nudestix concealer pencil — my color is Light 3. I have that gene where my under-eyes are dark. As long as I can cover that, and above my eyebrows, where I have little veins showing, I’m O.K. I curl my lashes, and I try to wear mascara every day. It helps a lot in looking awake. I use the Lash Accelerator by Rimmel.

I’m very into my lashes. I’ve been down the road with Latisse and back. I was using it, and my lashes were great, but my eyes were red. So I stopped, but then all my lashes fell out. They don’t tell you that’ll happen! Now I’ve learned that you have to keep your lashes moist. I put castor oil on my lashes every night — just a tiny bit. You have to commit to it. It takes a month to see the difference.

Then I do a little brow. I fill it in with the Brow Sculptor by Tom Ford in Taupe 2. It’s an angled pencil, which totally makes it easier. For such a long time I never wore makeup. Now I’m in my 40s, and you have to do something. Otherwise you look in the mirror, and it’s, like, “Whoa, Sally!”

But I do still believe that less is more. People in this industry have really gotten carried away. There’s too much fake stuff. I used to be, like, “I’m going to get a face-lift as soon as I can.” Now I feel it’s too demeaning. It’s giving into a community or a pressure that is not good. If you can’t deal with the pressures of the entertainment business, get off camera.

That said, I’m all for a little filler or Botox — I’ve definitely done that and still do — but you’re supposed to accentuate the positive. Everything is about making you look less tired. It’s not about looking like an entirely different person.

My natural color? Great question. I have no idea. I was blond until I was about 9 or 10. Then I started getting a little sandier. Being the only blonde in my family, my mom was, like, “Oooh!” She started dyeing my hair blond when I was around 11 or 12. I wanted to dye it, but frankly, I didn’t have to force her hand. I’m guessing my hair is a dark brown. Who knows!

But I do know I don’t like my hair yellow blond. I keep it light and bright. I’ve been going to Justin Anderson for my color for two or three years now. Justin turned me on to dpHUE products. I use the Cool Blonde shampoo. I use the Argan Oil Therapy after the shower or after I blow-dry.

For 15 years, I wore my hair back when I was off. I was doing a show and on set all the time. This last year, I realized that since I’m not doing the show, I can’t have wet hair in a ponytail every single day. I’ve learned how to blow-dry my own hair. It’s not as good as a professional job, but I’ve gotten pretty good. For press and events and such, I go to my stylist Christine Symonds. You have to understand how many people it takes to get ready. A village!

You can convince people in L.A. to do anything. I’m pretty cynical, but I’m pretty stupid, too. Like, “Yeah, I’ll go to that psychic!” Then I’ll be there and wonder what the hell I am doing. One thing that saves me is that I might try it, but I don’t go in deep.

For three months I’ve been meditating every morning for 15 minutes. My therapist made me commit. I was complaining I couldn’t do it. Three months! I could be dead in three months. But now I’ve done it, and it has made a huge difference. It really helps set the tone for my day. There’s a sentence I never thought would come out of my mouth.

I use the Headspace app. You can start with just three minutes, and when you’re ready, you can go on to five minutes. It’s not every day where it clicks and you’re, like, this is awesome. You just have to keep doing it.

A diet is a diet. Intermittent fasting and keto, they work, but they’re not reasonable. At some point, if I’m on vacation, I’m going to eat pasta and bread. I need something I can do for the rest of my life. So I eat very small portions throughout the day. It’s about five or six meals, and it’s pretty low-fat. That way I can cheat and still have a couple bites of cake here and there and be O.K.

Also I’m drinking a lot less now. Once I hit my 40s, alcohol really took a back seat. Now it’s mostly about edibles and weed, which are all totally available here in L.A.

I work out with a trainer named Ben Bruno maybe three or four times a week. I have to break up my sessions with him because he gets annoying. So I do Pilates twice a week with Sarah Shell. I’m definitely stronger now than I’ve ever been. Mental grit and physical grit, you have to work on both. It’s not one or the other.