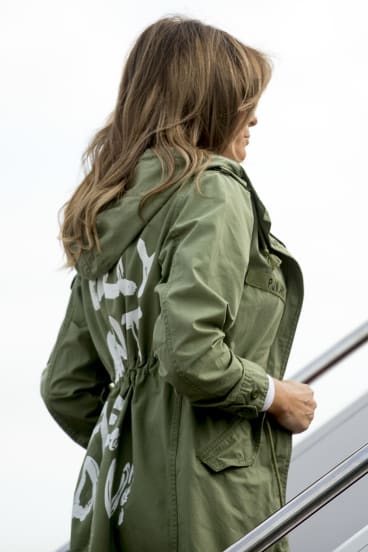 A US clothing company is taking a sartorial swipe at first lady Melania Trump, selling jackets saying "I really care, don't you?" in response to the "I really don't care" jacket she wore to visit migrant children separated from their parents.

All proceeds from the jackets, selling for $US98 ($132), will be donated to a Texas-based refugee and immigrant advocacy group, said Emma McIlroy, chief executive of the Wildfang clothing company in Portland, Oregon.

The first lady's visit on Thursday to a Texas shelter housing migrant children was overshadowed by the jacket she wore with the words: "I really don't care, do u?" scrawled in white brush strokes on the back.

Her jacket prompted a maelstrom on social media over what it meant.

Her spokeswoman said the jacket had no hidden message while President Donald Trump tweeted that it referred to "fake news".

Wildfang had its version of the jacket, with its slogan on the back, for sale online the same day as the first lady's visit.

The first batch of 100 military-style jackets sold out within an hour, and a second batch sold just as quickly.

The small, five-year-old clothing company is now taking requests for T-shirts and other emblazoned jackets to fulfil in the next few weeks, McIlroy said.

"I think it's just incredibly hopeful and refreshing," she said of the response.

With sale of its jackets, Wildfang was more than halfway through its goal of raising $US50,000 for the Refugee and Immigrant Centre for Education and Legal Services in San Antonio, Texas, McIlroy said.

Trump's version of the jacket was sold by the Spanish fashion chain Zara. A representative of Zara could not be reached immediately for comment.

Her visit to Texas came a day after her husband signed an executive order to modify his administration's practice of separating children from their migrant parents when they illegally enter the US.

The practice caused an outcry in the US and was condemned abroad by leaders such as Pope Francis.