Toni Maticevski is angry. The usually mild-mannered fashion designer and couturier has bitten his tongue about other fashion companies allegedly copying his work for years. But he's had enough. 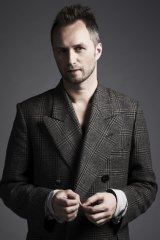 Designer Toni Maticevski says enough is enough when it comes to other brands copying his designs.Credit:Benn Wood

"Everyone who knows me knows it takes a lot for me to get really angry," Maticevski said. "For me to take a stand means I have been pushed to my absolute limit. It’s not something I do lightly, in any situation. But when it comes to protecting myself and my work, that's my priority. And I won't back down."

Melbourne-based Maticevski has just returned from showing his forthcoming range in Paris to critical acclaim. While he was there, he came to the realisation that he'd had enough of maintaining a silence over the issue.

“I’ve had an awareness that this has existed in the Australian system for a long time and it's time that there are steps taken to rid the industry of this practice," he said.

"The level of investment I have put into creating something, as opposed to someone who says, 'I want a piece of that' and walks away with it … doesn't sit well with me because [they] haven't really put everything on the line like I have." 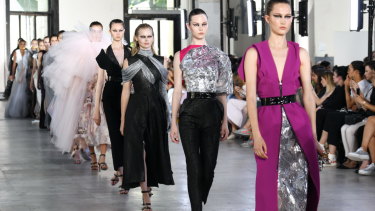 Models at Toni Maticevski’s Paris show. The designer has spent 20 years carving out his signature style.

For as long as design has existed, creatives have fought hard to protect their intellectual property. But as the line between inspiration and imitation becomes increasingly blurred and legal remedy is harder to come by, designers are going rogue. Whereas once these battles were mainly staged behind the closed doors of lawyers' offices, they are now being waged publicly, on social media.

The airing on social media of designers’ concerns might be a sign that they are frustrated with the current system.

Maticevski has tried all means available to protect his 20-year career's work. A few weeks ago, he aired his latest frustrations against copycats on his Instagram story.

He's not the only one hot under the collar. The morning after last month's Logies, Sydney couturier Steven Khalil was forced to defend the originality of his work after another designer, Jason Grech, publicly called out Khalil for alleged copying.

Grech claimed Khalil made a gold dress for Home and Away's Ada Nicodemou for the awards night that was very similar in colour and shape to a design of his worn by personality Sophie Monk to the same event. Khalil denied the accusation and said he had come up with the concept without having seen Grech's design, based on a pattern he had used for many years.

"The airing on social media of designers’ concerns might be a sign that they are frustrated with the current system, and it’s a way to draw attention to the issue of copying as well as to their own brands," she said.

When it comes to protecting their work, designers have several options for seeking protection, including registering their work, which costs several hundred dollars each time, with IP Australia. The country's top applicant, Zimmermann, had 118 registrations last year alone.

While registration is one thing, enforcing the protections it affords is another, says Maticevski.

"I’ve spent thousands on registering styles and doing things legally … but there’s no protection," he said. "When it comes to defending [against copies], it’s kind of, ‘Well it’s still a little bit grey.’ I can backtrack my [design] DNA 20 years – can they?"

Maticevski has reason to be frustrated. Successful cases involving fashion designers legally enforcing their copyright or design registration in Australia are few and far between. Bag brand State of Escape has stopped numerous copycat brands from releasing borderline facsimiles of its signature designs, while swimwear brand Seafolly has found itself on both sides of the fence.

In 2014, the Federal Court awarded the swimwear giant more than $250,000 after surfwear chain City Beach copied three of its designs. But Seafolly also had to defend claims it copied the work of Gold Coast designer Leah Madden, of White Sands. While Seafolly won the first round of the court battle, which began in 2010, in 2014 a court ordered the company to pay Madden $40,000 after a series of malicious press releases against her.

For me to not take action is like me accepting cheap stuff will happen.

He said, although he doesn't like to see designers publicly attacking one another, it exposes a "flaw in the system", namely the difficulty designers have legally protecting their work.

"They just don't know where else to turn. There have been so few successful cases in recent history about protecting copyright," said Giles-Kaye.

He said IP Australia, which administers intellectual property law, is reviewing the registered designs system and how it relates to fashion. Ultimately, it may lead to the government tightening the laws around design protection to bring them more into line with world's best practice.

Still, meaningful reform could take years, leaving designers such as Maticevski with little choice but to engage lawyers, or find other ways to protect their work, including naming and shaming.

He said, most of the time, it's his loyal customers, who have paid upwards of $1000 for a piece, who draw his attention to imitations.

"[My clients] are the ones who are invested in what they are buying," he said. "For me to not take action is like me accepting cheap stuff will happen, and [telling customers they] can keep buying the expensive original or you can go that way. I have 20 years of building my audience and aesthetic and some of these guys have two seasons."