Elizabeth Hurley soaked up the sun in a leopard bikini to celebrate her fave swimsuit being back in stock!

Another day, another insanely gorgeous bikini photo from Elizabeth Hurley. The Royals star, 53, let her fans know that her absolute favorite bikini from her Elizabeth Hurley Beach line was back in stock by modeling it on Instagram. Posting a throwback photo of herself wearing the skimpy leopard two-piece, Liz made a great argument for adding it to their wardrobes before it sells out again.

This isn’t the first time that Liz has sizzled in a leopard bikini. In February, she revealed that she packed another tiny leopard number when she took a trip to India. The throwback photo, taken at the luxurious Ananda in the Himalayas health spa, showed the Austin Powers actress perched on the edge of a pool while gazing back at the camera. So beautiful!

Liz’s latest throwback moment comes shortly after the actress denied rumors that she and her model son, Damien Hurley, are gearing up to film a reality show together. Liz and Damien are total look-alikes, and fans are downright obsessed with the 19-year-old up and comer. Unfortunately, a live look at their life in England isn’t in the cards right now. 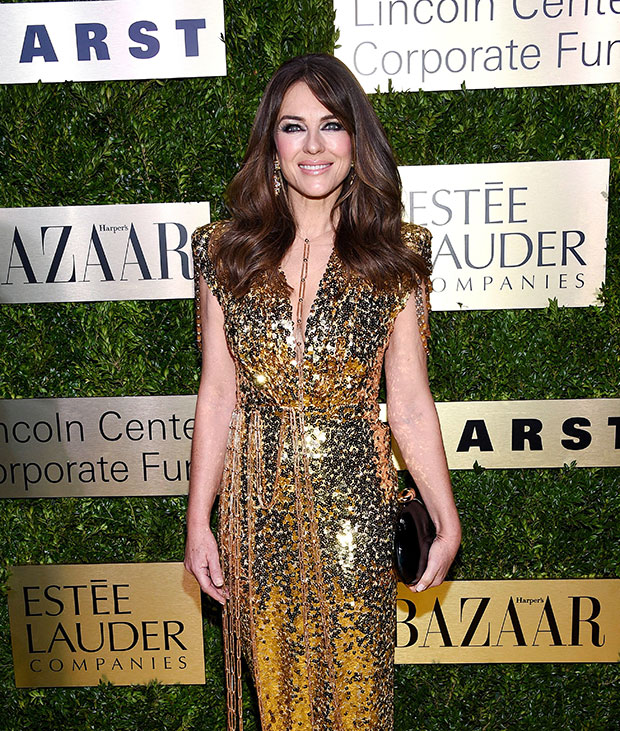 “Hear it from the horse’s mouth, my son @damianhurley1 and I are most definitely NOT planning to shoot a ‘Waltons– style reality TV show’ at home,” Liz wrote as the caption of a scandalous Instagram photo. That home? A 13-bedroom estate in Herefordshire, located in the English countryside. The Bedazzled star added, “I mean!! Whoever the ‘friend’ (or bored journalist) is, who’s leaking these fictional tidbits, you are ridiculous.”

The photo in question (which you can see here) shows a completely nude Elizabeth lounging on a haystack. Ouch! Her photographer, Jonathan Bookallil, squashed the rumors on his on Instagram page, writing, “Unfortunately the rumours of @elizabethhurley1 doing a reality show at her country estate are not true… as interesting as it would be…”