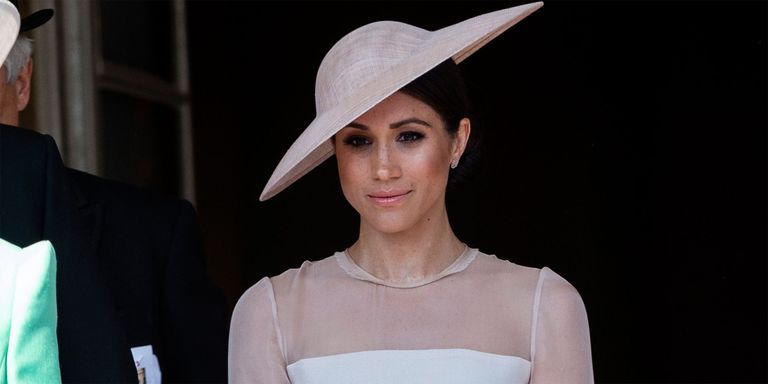 The new Duchess of Sussex broke yet another clothing designer’s website yesterday. Meghan Markle made her first appearance as a royal highness in a ladylike rose pink dress by Goat at a garden party honoring her new father-in-law, Prince Charles. Following her new royal protocols, the Duchess held on to a tiny clutch (instead of her beloved shoulder bags) and even wore hosiery for the first time for a royal engagement.

This quintessential British brand, which launched in 2001 by founder and designer Jane Lewis, has been a bit under the radar to those of us stateside. What initially started out as a cashmere range, eventually expanded into a full ready-to-wear line. The clothes exude a timelessness with a focus on craftsmanship.

“For me, it’s all about making luxury look effortless. I prize style over fashion always, because it endures,” Lewis wrote on her website.

From floral frocks to beaded-collar dresses and chic suiting, Goat does have a regal quality to it upon closer inspection. So it’s no wonder that even Markle’s sister-in-law, the Duchess of Cambridge, Kate Middleton has been a fan of the brand for some time. Kate was first spotted wearing Goat last year, and several times throughout her pregnancy with her latest little prince.

Over the years Goat has quietly amassed a major celebrity following including Victoria Beckham, Lana del Rey, Sienna Miller and Gwyneth Paltrow. However, with the Markle Sparkle in full effect we imagine there will be many more sold-out styles in their future.

If you missed out on the Duchess’ pink frock the brand has lots of other styles to offer at goatfashion.com. SHOP