It just takes one good woman to change perceptions and in 2016, she was a gorgeous footballer’s wife on the Brownlow Medal red carpet.

Looking a million bucks, D'Arne Finnis, spouse of St Kilda CEO Matt Finnis, rocked the red carpet in a frock she proudly informed the slathering “who are you wearing?” media she bought at a local Sacred Mission op shop.

For me, it was a fist thumping moment of elation; an endorsement of my personal sentiment that the fashion industry is the antithesis of personal style. But more importantly, it was a timely tap on the shoulder to all women who fall for the industry’s pernicious message you need new and now!

Having survived years in fashion magazines where I was a hamster trying to stay en trend –perhaps more honestly, feel accepted – it took stepping off the wheel to see what a ridiculous waste of money, time and energy that competitive, consumeristic con job is.

Yet it is not just the endless “buy, buy, buy” mantra that is so insidious about the multi-billion dollar industry, it’s the hidden history behind the mass manufacturing of garments today – the obscene exploitation of underpaid workers, the squandering of natural resources and ravaging of the environment.

As The Chaser's Craig Reucassel showed us in the excellent ABC series War on Waste, Australia is one of the most wasteful countries in the developed world, where 6000kg of clothes are thrown out every 10 minutes, enough to fill the MCG two-and-a-half times every year. What’s more, three-quarters of all clothing purchased in this country is tossed within a year, one in five of us jettisoning an item after only one wear. 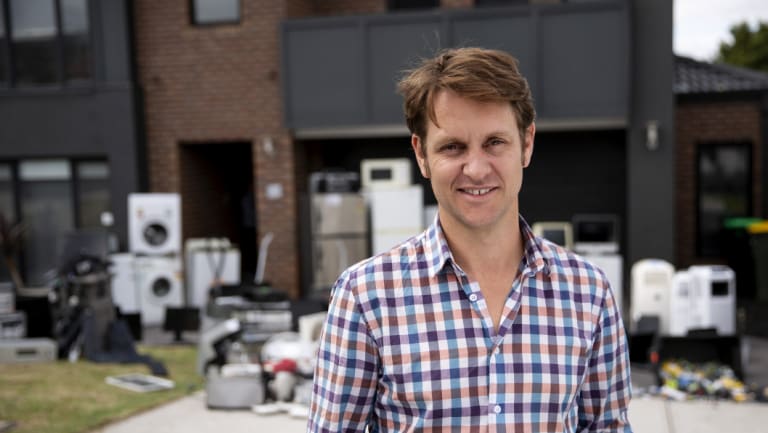 If this isn’t sickening enough, the volume of water consumed by apparel production each year is currently the equivalent of 32 million Olympic swimming pools, with 7000 litres of water (the amount of water one individual drinks in 5-6 years), needed to produce just one pair of jeans. Add to this the wages of workers in garment factories can be as low as US$1-$3 a day, with a top corporate CEO earning as much in a year as 10,000 garment workers earn in Bangladesh.

The fashion industry is an ugly indictment of consumerism at its worst. And today, I refuse to buy into it, my desire to look good eclipsed by my need to feel good about myself first.

Not that I don’t shop – I still do and enjoy the process. But bugger the shiny and new and labelled. When I look in to high end shop windows today, I wince at the prices and wonder how anyone can validate a handbag costing the same as a car (well, my car anyway). We need to get a grip on the real cost of covering our bodies and think about the money we spend doing so.

Away from $300 singlets and $470 Gucci swimming costumes that can’t be worn in chlorine, let’s consider just how obscene it is that a new t-shirt can cost $3 considering its journey from field to swing-tag and the labour involved. These days such items don’t make me feel good, just grubby.

As a result, I have returned to my roots; a happier time when I dressed how I wanted to (or could afford to), mainly shopping in op shops. Back then I looked individual, not just a fabric facsimile of every other woman. I like wearing items that match my personality and not some fashion edict which will date in minutes. What’s more, I feel good about shopping today because I never spend more than I can afford, a contrast to pervasive guilt of my shopping past. But the best aspect is I know that my money is going to a good cause – feeding the homeless or keeping a women’s shelter open. Selling on line gets rid of stuff, donating to an op shop creates social change.

I’m mentioning all this because it’s National Op Shop Week, a time for all good women to take inspiration from D’Arne Finnis. Since 2016’s red carpet, she has rallied more high-profile women of AFL to donate their gowns to be paraded then sold in the same op shop she bagged her bargain in, raising much-needed funds to help accommodate the 10,000 Victorian women experiencing homelessness on any given night. These efforts have instigated an even bigger movement, “Give a frock”, encouraging the public nationwide to throw parties to sell, swap or donate during Op Shop Week.

Similar actions happening in other states make me confident a change is coming, that women will get the message that they don’t need to be told what to wear; that Kardashian consumerism is crass; fast fashion is need on speed; and want is not the same as necessity.

If one good woman can make such an impact with a simple gesture as D’Arne Finnis, imagine what every female can do if they use clothing to help sisters rather than compete with them?

Wendy Squires is a Fairfax columnist.