Is there anything Rihanna can’t do? Not only is she one of the Met Gala 2018 hosts, but she’s teasing new Fenty Beauty products and launching a lingerie line. Basically, she’s taking over the world, and yes, please, Queen! In a sly moment, though, Rihanna wore Savage x Fenty and gave her fans a low key sneak peek into the line without many people noticing.

On Wednesday, Rihanna and Vogue revealed that she is the star of their May cover, and given her position as an Anna Wintour hand chosen host of the 2018 Met Gala, that makes total sense, but it wasn’t just a cover. Being the newly minted beauty mogul that she is, Rihanna also dropped a makeup tutorial with the magazine. In it, she’s her lovable self, and she even gives Fenty Beauty fans a sneak peek at upcoming products, but it’s not the only thing she teased.

If you haven’t heard, Rihanna is launching a line of lingerie called Savage x Fenty, and if you watch the Vogue video, you’ll notice that Rihanna is wearing a robe over what certainly seems to be a bra. As it turns out, she was wearing the new line in the video, and fans have now officially seen the Savage creator in the duds.

Perhaps the biggest clue that Rihanna gave that she was wearing Savage x Fenty was the fact that on Friday, she posted a clip of the tutorials to the lingerie line’s Instagram account. The clip had "Tryna keep it together til May 11 like…" In case you haven’t heard, the launch date of Savage x Fenty is May 11. Suspicious, right?

The other clue? She’s wearing a SavageX necklace. If that doesn’t seem suspicious, what would? Of course, there’s the fact that the bra she’s wearing beneath the robe look quite a bit like another sneak peek she gave over on social media.

While the robe hasn’t been seen in any of the Savage x Fenty previews, it certainly seems like a possibility for the line. Given that Rihanna is already wearing the bra, why not also show a piece that hasn’t been seen by her fans yet? 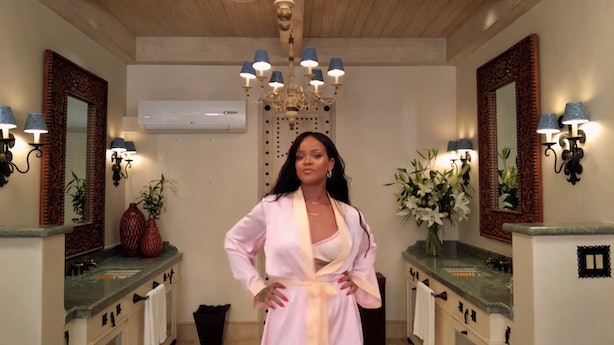 As soon as fans caught on to the fact that Rihanna was wearing Savage, they were stoked.

And that robe? It seems like people want to get their hands on it.

Rihanna’s Navy (the name of her fans) haven’t exactly just got excited because of Vogue‘s video. They’ve been ready since the very beginning, and the Fenty Beauty creator isn’t just make the line for a limited number of her fans. Savage is set to be inclusive with sizes reaching up to a DDD bra and 3x panty, but there’s always the chance that Rihanna could expand past what her website seems to suggest at the moment.

While May 11 is still a few days away, Fenty lovers are so ready to spend their hard earned cash.

While Rihanna has shown bras, panties, and some teddies, the full collection is still kind of a mystery, but that isn’t going to stop anyone from putting back a little bit of cash to spend on Savage x Fenty (okay, probably more than a little cash).

Clearly, Rihanna is the queen of the low-key tease. From a few new Fenty Beauty products to pieces from Savage x Fenty, her Vogue makeup tutorial was so much more than a way to see how the singer, actor, and beauty mogul get her own Fenty face. It was a way to see what’s coming next, and to say fans are excited is probably an understatement.