Missguided is a British fashion brand that’s proving to be revolutionary when it comes to their representation in marketing and ads. Depicting all different shapes, sizes, skin tones, and sexual orientations, Missguided has now moved on to normalizing skin conditions with their #InYourOwnSkin campaign. The brand understands that if a person doesn’t see themselves represented in the mainstream they feel like they’re not beautiful or accepted, and this new campaign sets about to right those wrongs. Featuring six different women with varying skin conditions — from psoriasis to albinism — these ladies were picked because they "continue to challenge the world’s perception of beauty and exude the confidence to be comfortable #InYourOwnSkin," according to the brand.

This is an offshoot of Missguided’s #KeepOnBeingYou campaign, where they were on a mission to inspire their customers to feel unashamedly confident in being themselves. "It’s all about embracing your flaws, ignoring the haters, celebrating what makes yo unique, and always striving to be that little bit extra. Because f**k being perfect, just be you babe," Missguided shares.

With that campaign they released a one-minute film where we were treated to a dizzying array of immaculately dressed people, spanning the spectrum in size, color, sexual orientation, and style. From men in mesh bras and leopard print coats, to women with shaved heads, to a Chihuahua with a fur coat, it was a celebration of individuality (and made you want to wear bell bottom sequined pants on a Tuesday morning.)

The #InYourOwnSkin campaign takes it another step further and spotlights people with skin conditions that aren’t normally celebrated in the media. The hope is to inspire people to love themselves for who they are. Below is a roundup of the six badass ladies changing the narrative.

Brice is a university student in Manchester, and she was scouted off the street while buying hot chocolate at a cafe. One of the brand’s scouts approached her about the campaign, and Brice thought it would be an amazing thing to be apart of. Mainly because she had always tried to hide her skin growing up, and wanted the chance to learn how to feel more confident and to promote skin empowerment. "Growing up I always wanted to change it and thought about trying to figure out what I could do to change it. I’ve realised it’s about accepting it," she shared with Missguided.

Fernandes was caught in a house fire when she was 17 that left her with burn scars down her arm and back as a result. She is a part-time model and hopes that her work will help normalize disabilities and disfigurements. When asked what the fashion industry could do more to inspire people, she answered, "I think having shoots that are specifically based on scars or difference or body positivity is really great and a really good start. But ultimately the goal is to have a mixture of women in the same space so women with a disability or disfigurement are also considered normal."

Ellens is a freelance model with striking red freckles all over her face, and she was excited to join the campaign because she supports brands showing different versions of beauty in their campaigns. When asked what the fashion industry could do to empower women, she answered, "It’s big brands like Missguided not photoshopping women or portraying women in the public eye as these ‘perfect’ creatures who young girls look up to." By dismissing the idea that there’s only one version of "perfect," we can all love and embrace ourselves more.

Dion is a media influencer and plus size model with albinism. When asked what beauty meant to her, she shared, "It means loving every single thing about yourself, and not only loving but understanding it. We spend so much time trying to be perfect but it’s very important to just look at where you are from where you once were and see the positives in that." 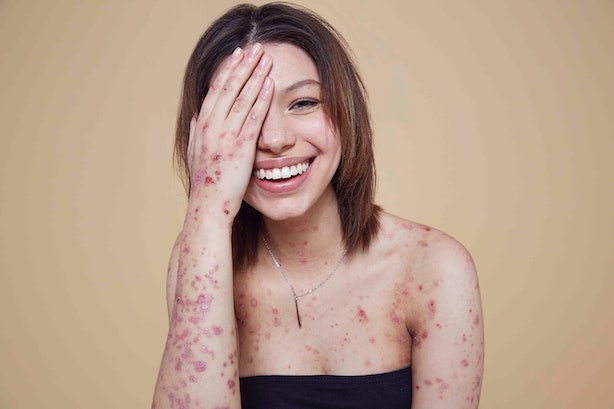 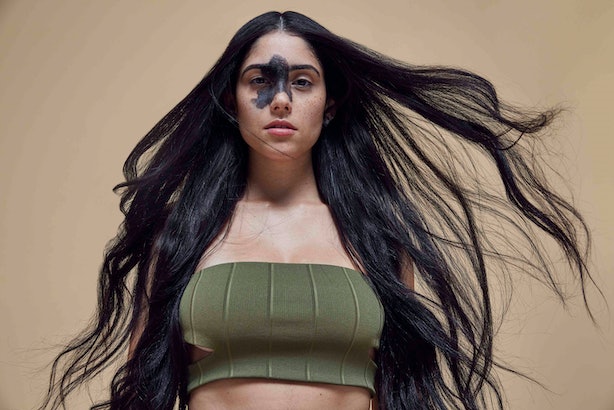 Mendes is a Brazillian model and fashion designer born with a birthmark across her nose. She has learned to embrace what makes her different, and uses it to empower others through her shoots and photography.

From freckles, to birth marks, to medical skin conditions, this new campaign aims to help us embrace our differences and see them as beautiful. "Flaws" no more.