On Saturday evening, a small group of German coal miners — in full gear, from headlamps to black boots — marched into Times Square to sing a song. The men’s coal-streaked faces were somber as they clutched their dust-smeared white overalls and sang the “Steigerlied,” the traditional miner’s song with origins in the 16th century, to a small, somewhat confused crowd of onlookers.

Was it a protest? A political demonstration? A happening?

No: It was Part 1 of a two-part fashion week event.

The miners came from Bottrop, a city in western Germany, where the country’s last coal mine closed in December, marking the end of an industry that played a vital role in Germany’s postwar economic success.

Facing unemployment, some planned to retire early; others would be retrained through government programs for different jobs: on railways, in power plants and for airplane manufacturers. But they were in New York because a small German fashion brand had come up with a different idea.

“I wanted to find a way to pay tribute to the heroic, hard labor that has been done here for generations,” said Matthias Bohm, the founder of the label Grubenhelden, whose pieces are based on the uniform that German coal miners have been wearing for hundreds of years.

“I chose clothes as my medium because you are permanently in touch with them,” Mr. Bohm, 36, said. “The Ruhr region — this dirty, gray, industrial area — is the reason Germany is what it is.”

Mr. Bohm’s grandfather was a miner who dug for coal with his hands, using a hammer and chisel, and the label’s entire team — four full-time employees and 14 temporary staff members, including three miners — come from coal country.

“It’s a part of Germany that people gave up on,” Mr. Bohm said, his voice cracking with emotion. But “it’s my home, and I must give my home something back.”

Founded in 2016, Grubenhelden — the label’s name translates to “pit heroes” — is defined by the blue-and-white-striped fabric of the traditional miner’s work shirt, incorporated into pieces like formal shirts, caps and zip-up hoodies.

Splotched T-shirts and leggings are hand-printed with coal, rubbed into the fabric and mixed with black paint to achieve a unique texture. And a 1930s-era miner’s formal coat, which once belonged to a miner named Aloys, has become the model for a new line of jackets made from wool, velvet and the original hammer and chisel buttons.

The traditional attire speaks to the current trend toward work wear and utility clothing, and has proved surprisingly popular in Germany: In 2017 Mr. Bohm won the Tacken award, which recognized Grubenhelden as one of western Germany’s most successful start-ups. That’s when he decided to bring it to New York.

“I have the chance to tell this regional history on the biggest stage in fashion,” Mr. Bohm said. He secured sponsors — Eurowings, Innside by Melia, and the European Regional Development Fund, among others — to help cover airfare and hotel for not only the collection, but also 30 people, including four miners. Most had never been out of Europe.

“It’s like a fairy tale,” said Christian Strzecha, 26, of coming with the label to fashion week. Tall and stocky, Mr. Strzecha began working in the mine a decade ago. He comes from a long line of miners and speaks with the earthy, rough vernacular of his milieu. “I once did a catwalk in high school, but it was only our parents watching, not the whole world of fashion.” 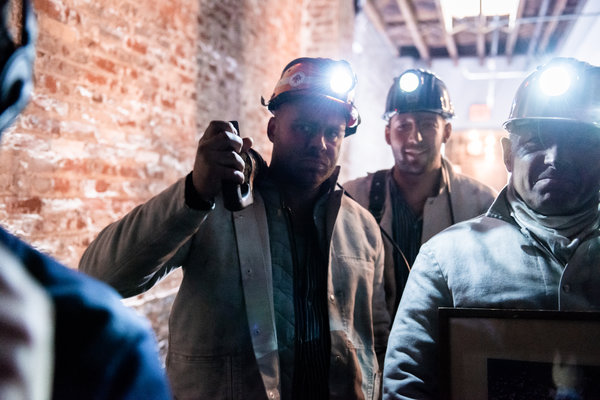 Another miner, Klaus Pütz, 49, agreed. “It’s incredible to be on stage here at fashion week representing my colleagues and showing our culture to the world,” he said.

“My grandchildren won’t believe a word of this story,” he added with a laugh.

The plan was to do the Times Square performance — Mr. Bohm wanted to connect with people on the street who could relate to the working-class culture on which his designs are based — and then hold a show, called “Hammer & Pick” (also the name of the collection), at Industria, the industrial-looking fashion hub in the West Village. He used the space because, he said, “our clothes don’t belong on a clean, white catwalk.”

To that end, the runway was set up to look like a kaue, a coal miner’s dressing room. (At the mine in Bottrop, the kaue holds roughly 3,000 miners.) Wire cages — the kind used to hoist dirty mining clothes up and return clean clothes down after work — hung from steel beams.

Washing bowls, lunch pails and bars of soap were strewn about. Guests sat on metal bleachers facing the set, and the square horseshoe-shaped perimeter served as the catwalk. A bell rang, signifying the show’s start, and the end of a miner’s shift. Coal miners sauntered in, headlamps aglow. The audience cheered.

“The last time I was on a stage like this was at the ceremony that closed the mine,” said Marcus Wieczorek, 27, a soft-spoken man from a multigenerational mining family. “That was an immensely sad day for me. But today was like nothing I’ve ever experienced. It’s … it’s once in a lifetime.”