The Australian film industry matured decades ago, but our red carpet performance has lagged like a hangry toddler in the chocolate aisle at Coles. At the Australian Academy of Cinema and Television Arts (AACTA) Awards, held at the Hordern in Sydney, celebrities finally looked ready to sit at the grownups’ table.

Gone were the glowering stares suggesting actors and actresses would rather perform a nude love scene than pose for photographers in borrowed clothes. In their place was a readiness to celebrate international ready-to-wear and custom-made Australian clothing, along with the willingness to occasionally answer “who are you wearing?” 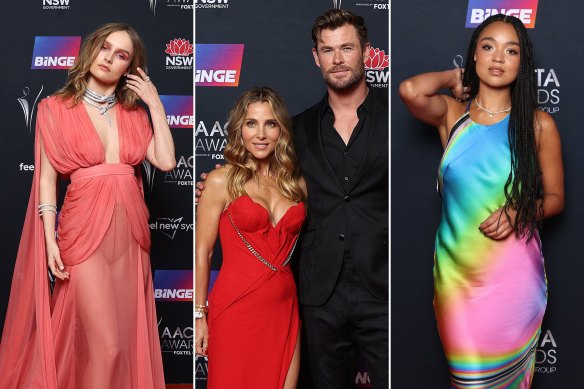 Olivia DeJonge in Gucci; Elsa Pataky in J’Aton and Chris Hemsworth in Etro; and Aisha Dee in Erik Yvon at the Australian Academy of Cinema and Television Arts (AACTA) Awards, The Hordern, Sydney.Credit:Getty

The shift in gears was a collective effort, rather than relying on the star power of the Hemsworths, with Chris putting down his Thor hammer and trading his usual Boss suit for razor sharp Italian tailoring from Etro. His actor wife Elsa Pataky wore a plunging gown from Melbourne designers J’Aton, adding a complementary Italian touch with jewels from Bulgari

“The gown was created around Elsa’s love of red,” says J’Aton co-founder Jacob Luppino. “With red being such a powerful colour we opted for a very tailored bold silhouette with classic couture elements paying homage to the heritage of the vintage Bulgari bracelet and added a twist in the dress for modernity,” says co-couturier Anthony Pittorino.

The confident work of Australian stylists Jess Pecoraro, Donny Galella, Mikey Ayoubi and Zakk Allan is partly responsible for the red carpet upgrade but the posing prowess of actors from generation selfie helped.

Heartbreak High’s Bryn Champan-Parish in Gucci and Asher Yasbincek in Fendi know their angles without having to take photos with their arms outstretched.

Finding international labels for stars of all ages in Australia can be difficult. This week’s British Fashion Awards and People’s Choice Awards left slim pickings on the relatively modest sample racks of luxury labels’ local outposts. For Luppino and Pittorino at J’Aton, this is a good thing.

“It would be nice if more Australian designers are represented on our red carpets, Luppino says. “Our businesses have suffered greatly over the past few years and are trying their best to survive and thrive in these uncertain times.”

Sissy directors Hanna Barlow and Kane Senes raised smiles in matching pink and red suits with a broken heart on their jackets’ back panel from Sydney label Daniel Moore. Smiling wider than most was Elvis costume designer Catherine Martin in Romance Was Born, perhaps happy at finally having competition when it comes to expressing style at major events in her home country.

There were still some red carpet clangers, but these also happen at the Oscars (hello Bjork). This was fun, Australian and adult enough to leave fashion followers hungry, rather than hangry, for more.

Make the most of your health, relationships, fitness and nutrition with our Live Well newsletter. Get it in your inbox every Monday.