A FURIOUS six-year-old wrote a hilarious letter to his teacher after she scolded him for talking – telling her she’s going straight to hell and she has a bad haircut.

The schoolboy’s angry note has gone viral after he told his teacher, Mrs Jones, she was going to the ‘real burning hell’ for confiscating his toy money. 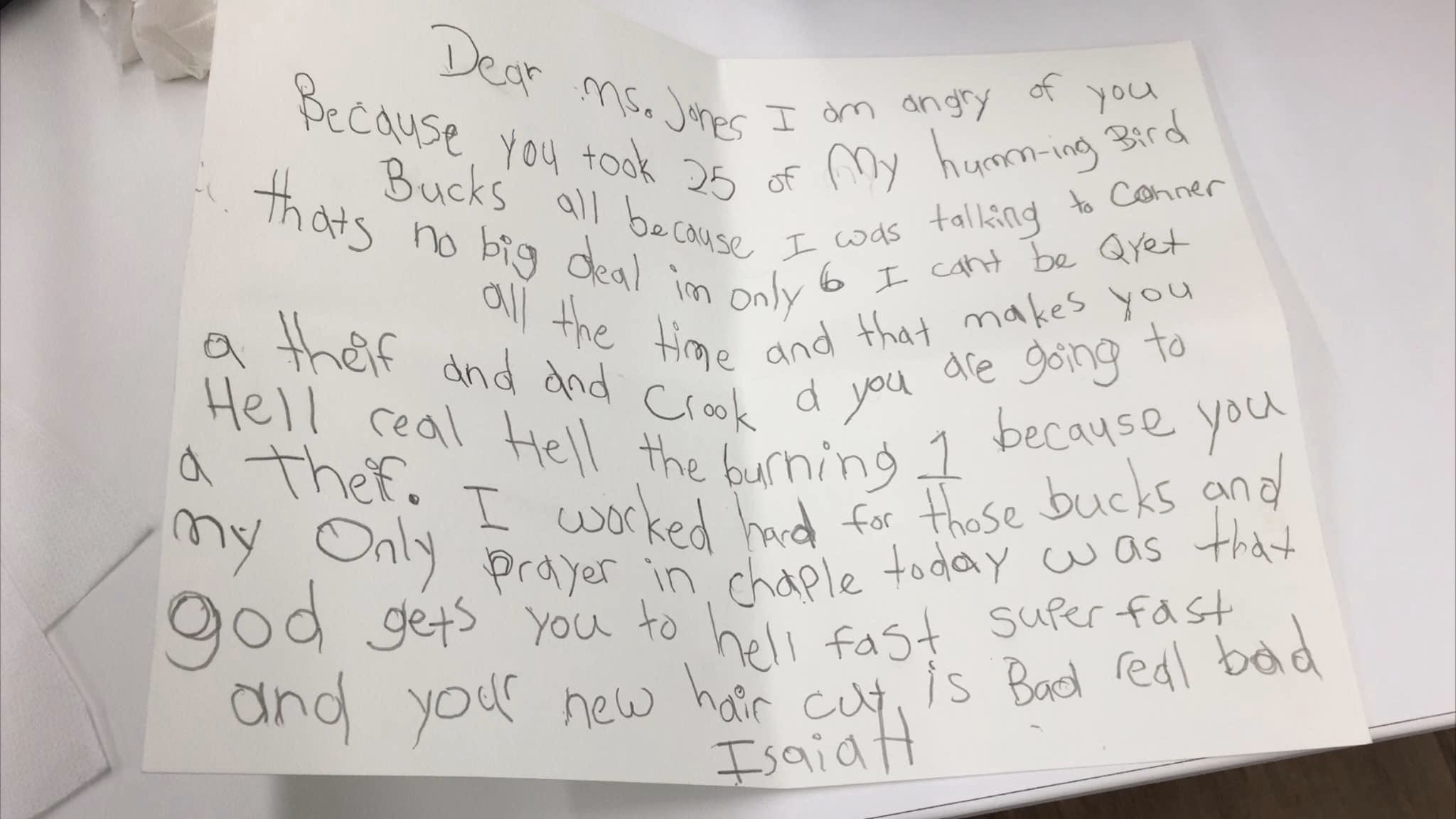 His mum was called to the school to have a meeting over the letter, which he signed off with his name, Isaiah, just in case Mrs Jones wasn’t sure who it was from.

The youngster didn’t hold back in his scathing note to Mrs Jones, even branding her a “thief” and a “crook”.

Isaiah wrote: “Dear Mrs Jones I am angry of you because you took 25 of my humming bird bucks all because I was talking to Conner…

“That’s no big deal I’m only 6 I can’t be quiet all the time and that makes you a thief and and crook a you are going to hell real hell the burning 1 because you a thief.

“I worked hard for those bucks and my only prayer in chapel today was that God gets you to hell fast super-fast and your new hair cut is bad real bad. Isaiah.”

The note was shared on Twitter, where it’s since racked up more than 250,000 likes, as people praised Isaiah’s spelling – but most of all his commitment to telling off his teacher.

Sharing the letter, Isaiah's mum's friend wrote: “Okay so my co-worker told us that she had to attend a parent teacher conference because of a letter her son wrote to his teacher.

“So she brought the letter to work and I almost fell out of my chair y’all.

“He actually deserves a little credit.”

Thousands of people have commented on the letter, which included adorable spelling mistakes such as ‘qyuet’ for quiet, and ‘chaple’ for chapel. 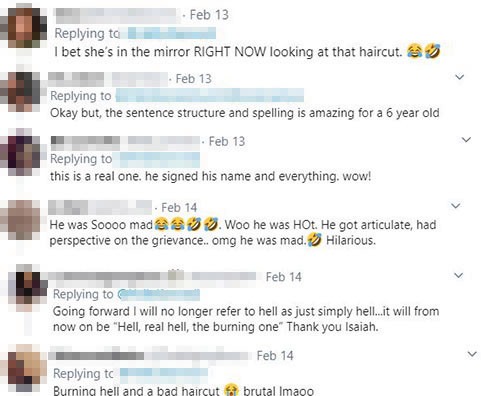 One person wrote: “I would also like to point out that Isaiah has great handwriting to be 6 and can spell better than most adults. He has a bright future ahead of him.”

Someone else said: “I bet she’s in the mirror RIGHT NOW looking at that haircut.”

A third commented: “Okay but, the sentence structure and spelling is amazing for a 6 year old.”

This person said: “This is a man who would not take anymore.”

Another thought: “This is a real one. he signed his name and everything. Wow!”

Someone else added: “And he understands the value of currency!”

While this person said: “The 6 year old version of ‘I said what I said’.”

In more parenting news, this mum claimed she calms her three-year-old's tantrums with "heart hugs".

Plus this mum claims she was lunchbox shamed by her kid's teachers for giving too much food.

And this mum had the internet in hysterics after her kids ordered "extreme farts expansion pack" on Amazon Alexa.