The heartbreaking image was shared on Facebook and shows six-year-old Jackson comforting his four-year-old sister Addy before she lost her fight with cancer. 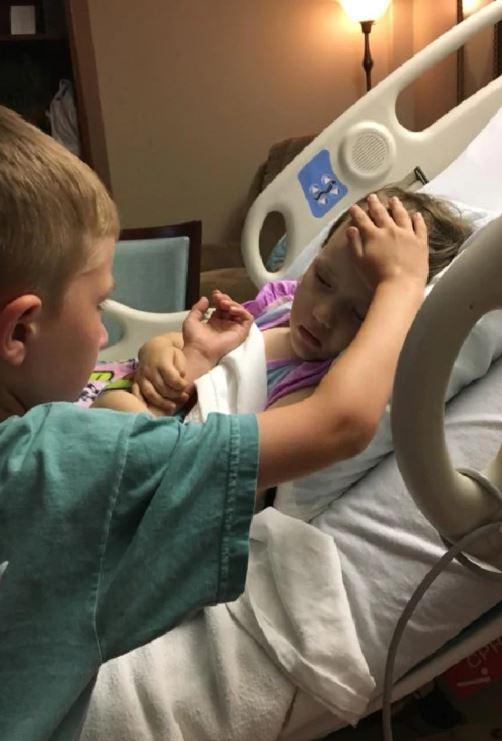 "A little boy should not have to say goodbye to his partner in crime, his play mate, his best friend, his little sister," Mr Sooter wrote.

"This isn’t how it’s supposed to be. But this is the broken world we live in."

In 2016 Addy, from the US, was diagnosed with diffuse intrinsic potine glioma, a type of brain tumour that starts in the brain stem and affects the patient's muscles, nerves, heart rate and breathing.

Over the next year and a half the four-year-old underwent 33 rounds of chemotherapy, which stopped the growth of the tumour for about six months. 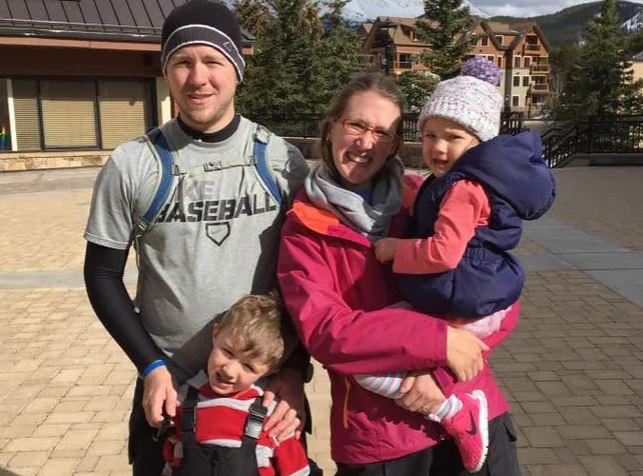 But when it started to grow again the family turned to experimental treatments in Mexico, which cost them over £150,000.

The treatment, which worked by draining fluid from the brain, seemed to help for a time but eventually the tumour continued to spread.

"Addy’s symptoms have progressed rapidly over the past day and a half," Mr Sooter wrote on Hope for Addy Joy on June 3, the page they use to update family and friends on her progress.

"Yesterday she woke up as her spunky playful self.

"While we still see short instances of our girl she can no longer eat or swallow without difficulty and she’s sleeping most of the time now and we’ve admitted her into inpatient care.

"Most likely she doesn’t have much time left.

"Pray for Jackson. He doesn’t want to leave her side and we won’t make him.

A FAST-GROWING TUMOUR THAT STARTS IN THE BRAIN STEM

Diffuse intrinsic potine glioma (DIPG), a type of brain tumour that starts in the brain stem and affects the patient's muscles, nerves, heart rate and breathing.

It's the second most common type of primary, high grade brain tumour in children.

Primary brain tumours are those which originate in the brain rather than having spread there from another part of the body.

High grade tumours tend to grow quickly and DIPG often spreads to other parts of the brain and spinal cord.

The cause of DIPG is not known.

Symptoms:
The signs vary from person to person, but may include:

Treatment:
Surgery to remove the tumour may not always be a viable option due to the dangers of operating on critical areas of the brain.

The standard treatment for DIPG is radiotherapy and chemotherapy, although recent studies have suggested chemotherapy is not as effective.

There is currently no cure for DIPG.

"Pray for us. That we have the right words and can make the necessary arrangements in time."

Addy died later that day, just hours after the loving picture between the two siblings was shared.

In the hours before Addy’s passing Mr Sooter said that Jackson was refusing to leave his sister’s side.

The tear-jerking photo showing Jackson resting his hand on Addy’s head while she clutched at his arm has been shared more than 900 times.

Hundreds of people have offered their condolences to the grieving family.

“Such a heartbreakingly beautiful picture. I’m so sorry for your incredible loss,” one person said.

“This picture speaks volumes. Jackson will cherish this forever! The love between a brother and his sister,” another user said.

One added: “This is just heartbreaking to see this darling boy caring for his sister. They should be out playing not this.”

Diffuse intrinsic potine glioma is a fast growing tumour that often spreads to other parts of the brain and spinal chord.

Surgery to remove the tumour is not always the best option as medics may be forced to operate in critical areas of the brain.

There is currently no cure for the cancer.

This story originally appeared on news.com.au and has been republished with permission.