To understand how people think about jewelry, consider the words we use for it: trinket, ornament, bauble.

So jewelry is pretty frivolous, if not downright unimportant. Right?

The Metropolitan Museum of Art in New York hopes visitors to “Jewelry: The Body Transformed” will come away with a different perspective. Unlike most exhibitions on the subject, which focus on styles, makers and techniques, this philosophically ambitious show grapples with how and why cultures incorporated jewelry in their defining rituals, from marriages and deaths to celebrations and battles.

“We are inclined to understand jewelry as a superficial pleasure,” said Melanie Holcomb, a curator in the museum’s department of medieval art and the Cloisters, who led a team of six in assembling the show. “I think you’ll leave seeing that adorning oneself is one of the most profound acts we engage in.”

“What this group was interested in was not how jewelry was made but how jewelry makes us,” she added. “The way it has the ability to transform us.”

Ultimately, the exhibition — featuring some 230 objects including ear ornaments, necklaces, rings, headdresses and other jewels as well as sculptures, paintings, prints and photographs, almost all culled from the Met’s collections — questions the fundamental definition of jewelry.

Where, for example, is the line between it and other forms of bodily adornment?

A Swarovski crystal-studded yashmak — traditionally a Turkish type of veil worn by Muslim women to conceal their faces in public — created by Shaun Leane for an Alexander McQueen runway show in 1999 caught the attention of Bella Neyman and members of the Art Jewelry Forum, an organization that promotes contemporary art jewelry, as they toured the show recently.

“Is it armor or is it jewelry?” asked Ms. Neyman, co-founder of New York City Jewelry Week, which had its debut Nov 12 to 16. “That’s one of the things this exhibition does really well. It allows people to question: What is jewelry?” 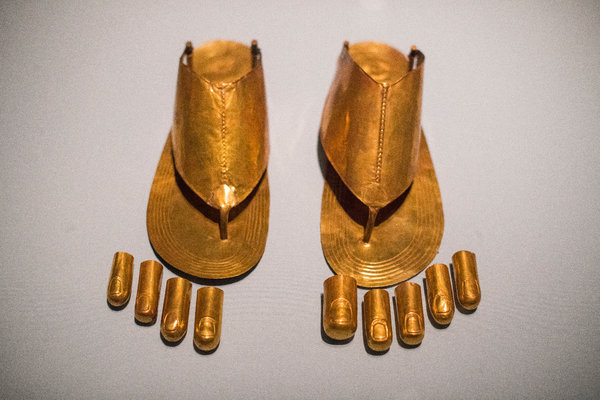 Regardless of how the yashmak is classified — Mr. Leane said it was conceived as “jewelry covering the body to create this formidable structure” — the designer stressed that the purpose of the objects he creates, be they jewels, furniture or public art installations, is secondary to the feelings that he hopes they arouse.

“That’s the big takeaway,” Ms. Holcomb said. “We turn ourselves into works of art.”

The exhibition, which has five galleries and runs until Feb. 24, begins with a central space devoted to “The Body Adorned,” a taxonomy of jewelry according to where it sits on the human body.

“We begin at the feet so the first things you see when you walk in the room are golden flip flops from ancient Egypt,” Ms. Holcomb said. “Things for the waist are at waist height; things for the chest are at chest height. We wanted this first gallery to be an experience rather than a didactic look at jewelry.”

“The Divine Body” houses some of the show’s oldest objects, including jewelry and a beaded cape dating to the Royal Cemetery of Ur in ancient Mesopotamia, about 2600 to 2500 B.C. In the exhibition catalog, two curators, Kim Benzel and Diana Craig Patch, noted that in Mesopotamian mythology, the jewelry of the goddess Inanna, or Ishtar, was “interchangeable with the powers of the goddess herself.”

“When she is wearing her accouterments, she is the powerful deity,” they wrote, adding, “when stripped of them, she is powerless.”

The gallery dedicated to “The Regal Body” centers on jewelry’s role in conveying status and hierarchy — “the easiest one for us to grasp,” Ms. Holcomb said.

She referred to an ivory arm band from the kingdom of Benin, in present-day Nigeria, featuring emblems of the oba, or king. Decorated with symbols of mudfish, an amphibious creature that suggested the king’s dominion over both land and water, and Portuguese faces, alluding to the trading networks that gave him his economic might, the bracelet was “a fantastic piece about power and cosmopolitanism in a global world back in the 16th and 17th centuries,” Ms. Holcomb said.

“The Transcendent Body” examines the ways in which humanity has used jewelry to mediate between the heavenly and earthly planes, as when pilgrims in India make bejeweled offerings to the Hindu gods Shiva and Parvati.

Ms. Holcomb said one particularly striking example came from Sumba, an island in eastern Indonesia, where jewelry often took the form of an omega-shaped ear ornament called a mamuli.

“Some of these mamulis are so potent in the kind of power they possess that they can’t even be seen,” she said. “They’re kept in an attic in a dark room. The only time it comes out is when the nobleman dies and the servant wears it. Talk about rituals that make your head spin.

“It’s certainly about magnificence, the evoking and invoking of ancestors,” Ms. Holcomb said. “But it also beautifully puts into relief how particular our own practices are.”

The final two galleries, “The Alluring Body” and “The Resplendent Body,” explore jewelry’s ability to engender desire and the effects of its opulence, respectively. They are home to the bulk of the show’s 20th- and 21st-century jewels, including those by the designers Elsa Schiaparelli, Art Smith, Elsa Peretti and Mr. Leane, as well as historic houses such as Cartier, Lalique and Tiffany & Co.

Given that jewelry and value are so inextricably linked, the question of preciousness pervades the exhibition. Although some pieces on display were made from organic materials such as shells, the viewer should recognize that what is considered precious changes from culture to culture — and that scarce materials such as gold and gemstones aren’t the only valuable things.

“I was astounded to examine an African necklace made of only straw and beeswax that, from afar, I could have sworn was made of ribbons of gold,” said Levi Higgs, a New York-based jewelry and decorative arts historian and archivist at the jeweler David Webb.

Mr. Higgs is scheduled to participate in “Jewelry Icons of New York,” a talk on the legacies of New York-based jewelers, scheduled for Feb. 3 and free to the public.

A leitmotif to the exhibition is what connects jewelry — both its execution as well as its appreciation — through the ages.

“It was revelatory to see two bracelets, made thousands of years apart, but when placed next to one another, appear as sisters,” Mr. Higgs said. “It really drove home the fact that humans have adorned themselves similarly for eons.”