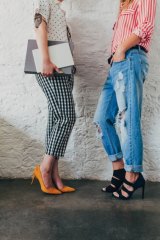 There are honestly just so many ways to butcher accepting a compliment.Credit:Stocksy

When accepting a compliment on an outfit, many of us seemingly strive to ensure the experience is equally unpleasant for ourselves, the compliment giver, and any unfortunate onlookers.

(Particularly that guy who had definitely finished using the photocopier but couldn't look away from the social multiple vehicle pile up you, at one point, appeared to have reversed out of… only to repeatedly accelerate into again.)

There is just something about someone saying they like your clothes or shoes (or bags, necklaces: those malicious compliment-givers really have no limits on what they might dare to describe as "nice") which can strike fear into the hearts of the otherwise confident. Here are the four cringe-worthy reactions which tend to result.

"What boots? Her boots? His boots? There are no boots here, madam! Where are the boots? Oh, my boots? The boots upon my own humble feet? No!"

Option 2: Explaining why the thing this person likes is bad

"Thanks! They were so cheap, honestly: Target. I know! Don't know how the white is going to go, though. I expect I'll have scuffed them by the end of the day. Also – the sock is so itchy. In fact, you know what? I might just go home and throw them in the bin."

Option 3: Also explaining why you are bad (often used with Option 2)

"Oh, you think? I'm worried they cut my leg in a weird spot. Also, white isn't my colour. And I don't wear heels very often so I am somehow stumbling over despite these ones being less than two inches high. In fact, you know what? I might just go home and jump in the bin myself."

"They were $39 from Target. There were many available at Target Broadway when I was there approximately two days and 19 hours ago, at an off-peak Monday evening time, but I would recommend calling ahead because they are a small store with frequently rotating stock. There were also red and black ones. Let me look up the store's number for you…"

How to (actually) accept a compliment

So, jokes aside, how should you respond when a co-worker says your shoes are nice?

"The misnomer here is to attempt to show humility by rejecting the compliment – which is the fastest way to ensure you won’t receive another," she warns.

"Whether we are feeling worthy of the compliment or not, it is polite and appropriate to accept it with a 'thank you' rather than rejecting it with an, 'oh this is just an old skirt I found'."

For Musson, the ideal response to a compliment is just one step and two words.

"The most appropriate response to a genuine compliment is a simple and gracious, 'Thank you.'"