I forked out $1.2k for the long and glossy hair extensions of my dreams, what I ended up with left me in tears

THIS woman paid $1,200 for 18-inch extensions, but her hair turned out so badly she was “bawling” by the end of the appointment.

Commenters say they would sue if this happened to them, and people are offering to call the salon to shout at the hairdresser on behalf of this disappointed customer. 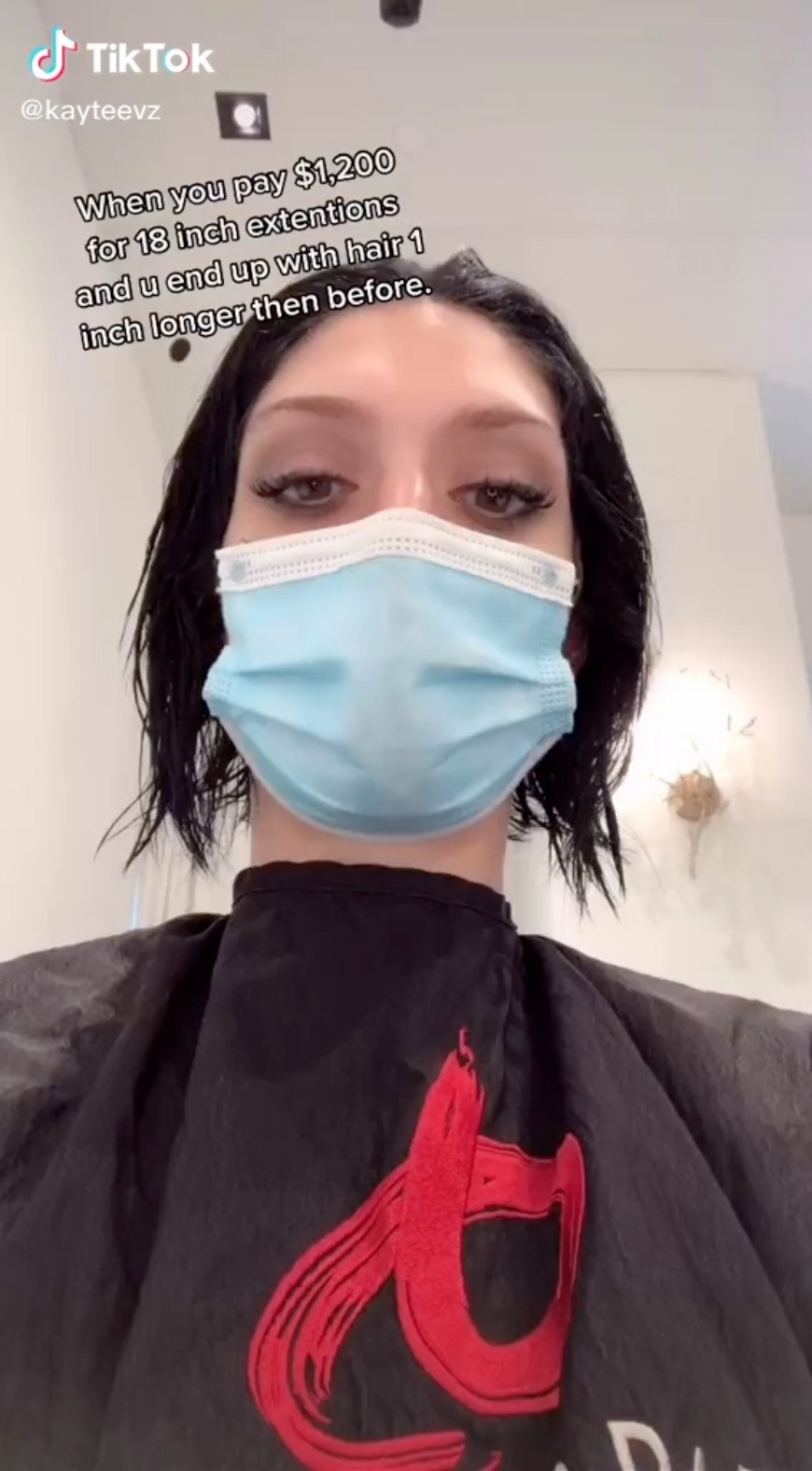 Tiktok user Kayteevz paid tonnes of money to get super long hair, but when she left the salon, her hair was just one inch longer than when she arrived.

“There’s so many things that went wrong today… They ended up telling me they would take them out for free on Tuesday…”, Kayteevz explained.

The disappointed customer explained exactly what went wrong with her botched extensions in a follow-up video.

“Two months ago I went into the salon, I paid $600 just to order the extensions. 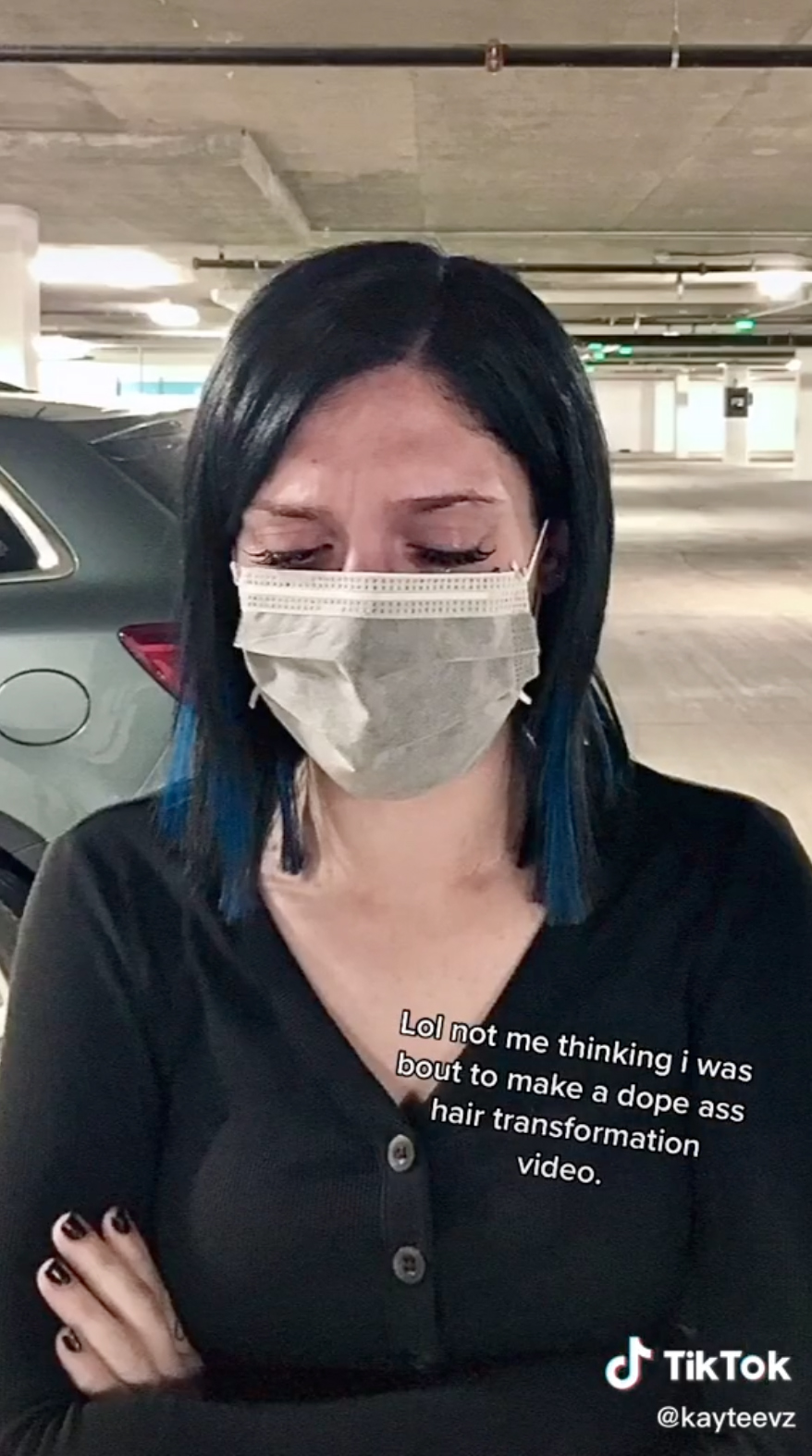 “The hairdresser evaluated my hair, so she should’ve known how much to order.

“Soon as I sat in the chair yesterday, I looked at the hair that she had and I said: ‘That is not enough.’”

Her hairdresser urged her to wait until the end result before judging how much hair was there.

After the hairdresser cut the extensions shorter and shorter, she asked Kayteevz to pay more money to buy more hair and come back another day. 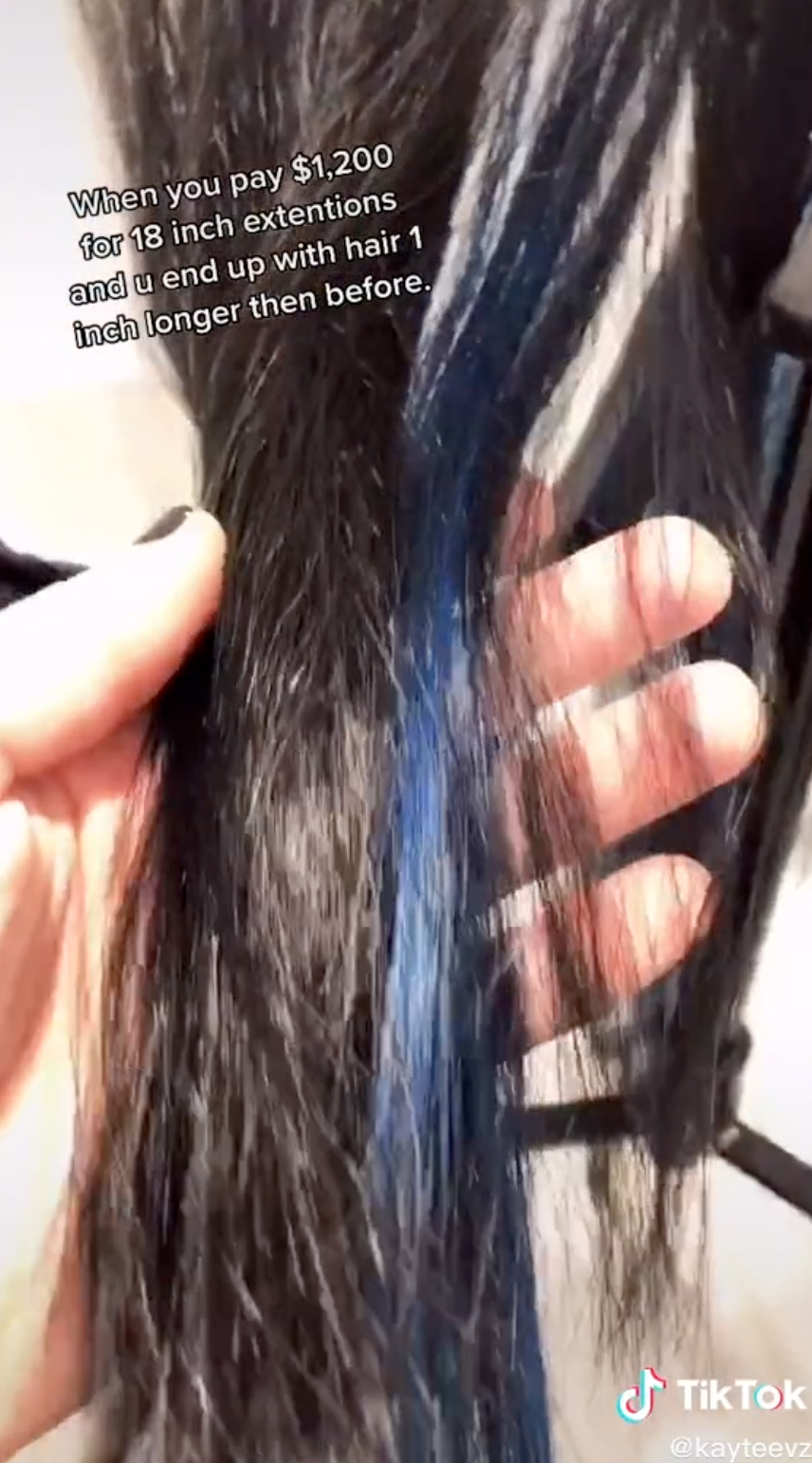 “I was already there for three hours more than expected”, she complained.

“She tells me she’s done, she can’t help me anymore, there’s nothing she can do about it”, Kayteevz explained.

At this point, Kayteevz was so cross she had to call her “big scary boyfriend”.

“No one was about to help me until he came through the door.”

When he arrived, Kayteevz was “bawling”.

The hairdresser had dyed her hair black to match the extensions and were supposed to tint her brows as well, but they wouldn’t even do that for her, as the nightmare appointment had “taken too long”. 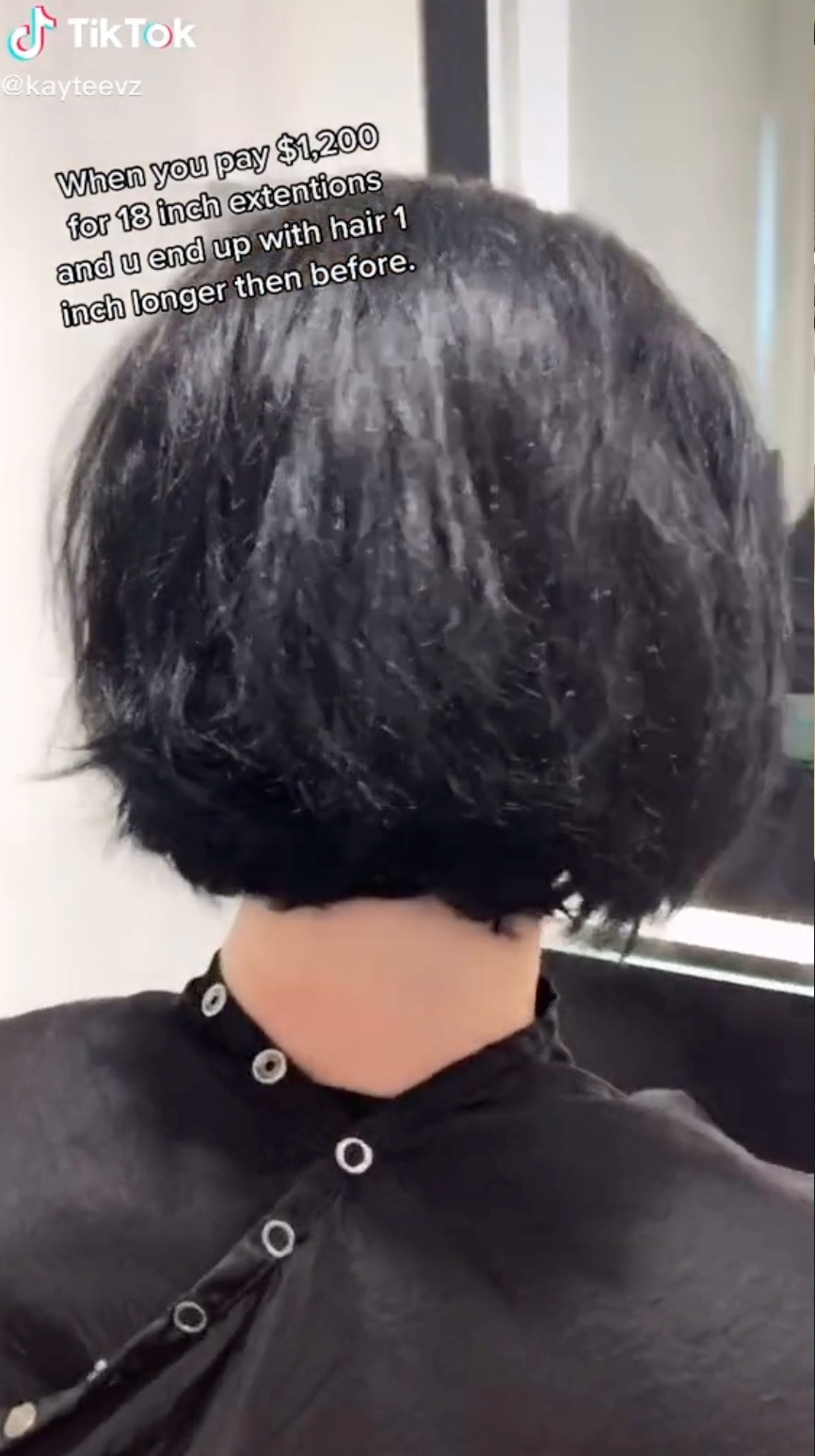 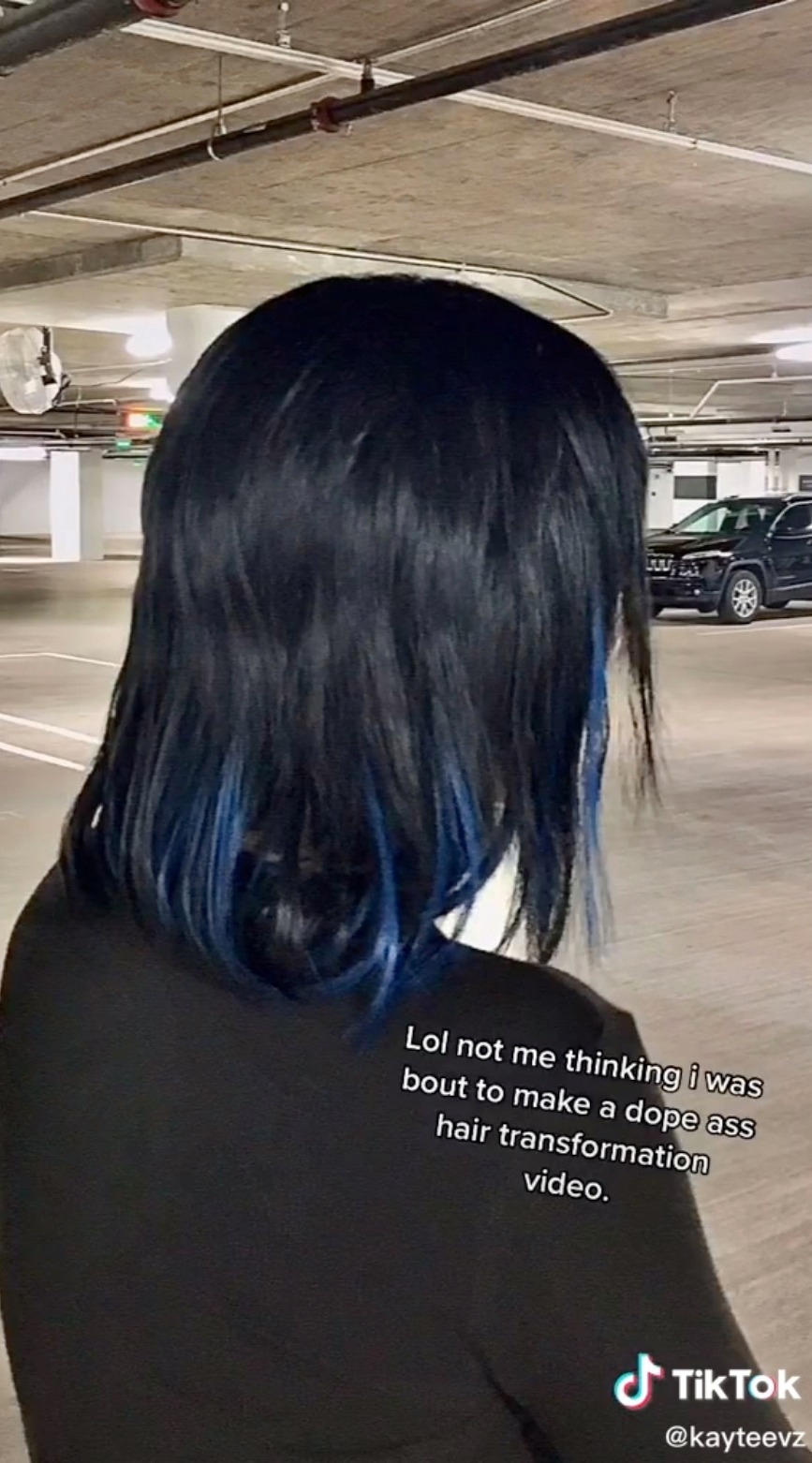 After her boyfriend got involved, Kayteevz’s hairdresser said she would take out the extensions for free.

The video was posted one day ago – it has already amassed almost 850,000 views and commenters can’t believe the story.

“Omg I would not have paid”, said one.

“Nah give me the number and I will yell at them. Tell them they gave you the wrong hair length and make them refund you”, advised one commenter, while a second agreed: “Get your money back, it’s not your fault she wasn’t prepared.”

Another simply said: “That is insane.”

One woman added: “That’s torture at that point. She should’ve just said: ‘I ripped you off.’ Omg.”

In other beauty news, this woman urges people NOT to get their eyebrows microbladed after showing the horrific results FOUR years later.

Plus, experts are warning against social media trend that has seen women turn to thrush cream to treat bad dandruff.

And one beauty fan was left mortified after melting her face mask into her hair while styling it and being told she'd need to cut it out.