In this world, there are the people who take themselves seriously, and then there is everyone else.

Before today, many people would have put British Vogue editor Edward Enninful and designer and former Spice Girl Victoria Beckham squarely in the former category. But not anymore.

For the 10th anniversary of Beckham's eponymous fashion label, the pair have starred in a spoof mini-documentary, directed by Isaac Lock, in which Beckham tries to art direct a Vogue shoot with her Spice World hat squarely on.

"I'll tell you what I want; what I really, really want," a bathrobe-wearing Beckham tells Enninful on the set, the words echoing the girl group's 1996 smash hit, Wannabe.

She goes on to tell the editor, the first black man to run the prestigious masthead, that she wants "me, four other women, one sporty, bit of an athleisure direction, one younger, lots of pink, pigtails", and so on, seemingly describing her Spice Girls group mates: Geri Halliwell, Mel C, Mel B and Emma Bunton.

While the Vogue staff give Beckham's brand plenty of platitudes, Beckham herself says the purpose of the shoot is "celebrating the rich and inspiring history of one of the most enduring style icons of all time: me, Victoria Beckham".

"This really is where two, become one," she says to camera in another nod to a Spice Girls hit.

During the video shoot, some of Beckham's most iconic looks make cameo appearances, including one of her Spice Girls catsuits, her Vivienne Westwood wedding gown, and even a chair from her wedding to David Beckham in 1999.

Of course, there is an actual cover shoot attached to the video. Beckham features on the front of British Vogue's October issue with her children: Brooklyn, Romeo, Cruz and Harper. 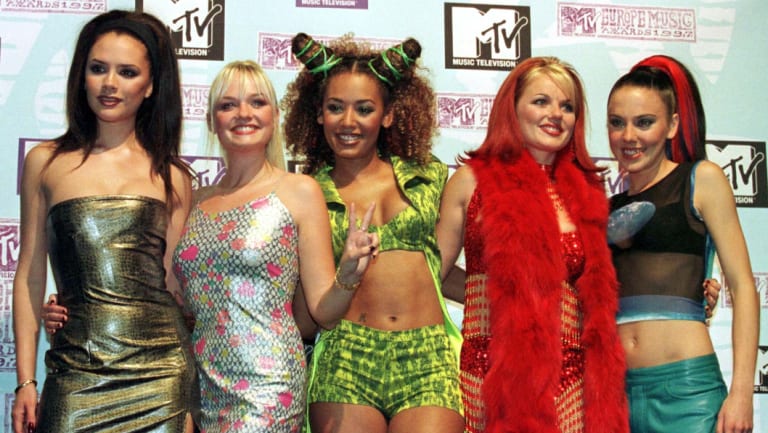 But the best joke is saved for the video's closing credits, when Beckham makes a joke about her apparent lack of singing talent: "I have a really bad experience with microphones, most of the time they were turned off or turned down really low so you couldn't hear me, so I want to make sure you can hear me."

Yes, Victoria, we can hear you. And we're not worthy.