PARIS — When, at 12, Grayson Perry began covertly dressing in women’s clothes, he assumed in his innocence that the impulse must have something to do with wanting to be a member of the opposite sex. For decades he pursued his cross-dressing adventures, first in private and then very publicly as a Turner Prize-winning artist whose performances increasingly incorporated his feminine alter ego, Claire.

It wasn’t until 2000, the year he turned 40, that Mr. Perry experienced an epiphany about his cross-dressing. It was, as it turned out, really “about me putting on the clothes that gave me the feelings that I wanted,” he has been quoted as saying.

The most joltingly direct and concentrated emotional hit, he found, came from wearing frilly, flouncy, beribboned frocks, the kind of confectionary stuff you picture when you think of Little Bo Peep. Classic preadolescent dresses, in Mr. Perry’s mind and also in his polemics, came to symbolize the antithesis of the macho. And it was Mr. Perry as Claire that came to mind often during the week of men’s wear shows that ended in Paris on Sunday, and not only because Mr. Perry is the subject of an excellent exhibition at the Monnaie de Paris, or Paris Mint (“Grayson Perry: Vanity, Identity, Sexuality,” through Feb. 3).

While emotion has hardly gone out of style, it has definitively gone out of fashion. It is difficult to imagine a more bloodless season than this one, or a more generally cynical one. Still, there were exceptions. 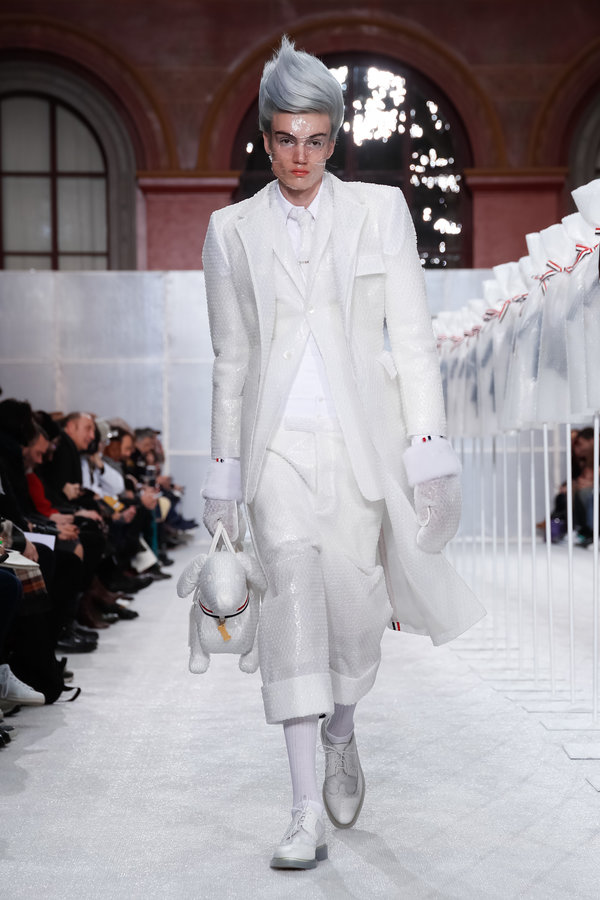 It is not just the short pants. It is not only that Mr. Browne’s constricted tailoring telegraphs a struggle to manage unruly sexuality. It is that there is always something interior and fetishistic, something intimate and slightly creepy, about the way Mr. Browne approaches the human body and conscripts you as an accomplice to his point of view.

For an audience that included Ermenegildo Zegna, the Italian fashion industrialist whose family label last year acquired an 85 percent stake in Mr. Browne’s company for an estimated $500 million, he sent out 12 groups that each had three looks. Most of them were deconstructed and then Frankenstein-stitched together again from familiar men’s wear elements, though this time as dresses. 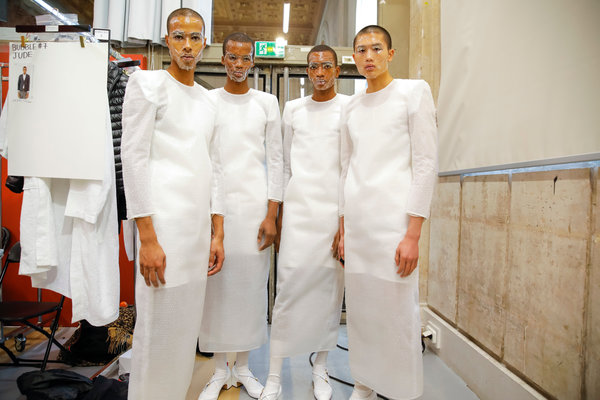 “I love the idea of a guy wearing dresses,” Mr. Browne said after the show, a notion that seems less transgressive when you consider that you cannot swing a cat in the Lakers locker room these days without hitting some fashion-forward ballplayer in a Fear of God tunic or a Gucci kilt.

And the show had the effect of separating Mr. Browne from the rest of the pack here in Paris and from the designers at houses like Berluti or Jil Sander or Valentino or Loewe or Hermès. Each put in efforts that, while impeccably (if predictably) skilled and on message; while communicating brand image and direction; while maintaining what people persist in calling the “DNA” of their labels (as if late-stage capitalism were genetically determined), mostly left this observer feeling numb.

Knowing that the Yellow Vest protesters, those persistent critics of what they describe as France’s inequitable economy, were mobilizing to come out in force on Saturday had something to do with the bristling impatience induced by a show like the one staged on Friday by the designer Kim Jones for Dior Men.

There was some fizzy excitement beforehand as fans rushed the rope line, chasing celebrities along a gantlet leading from their chauffeured cars to an immense gray box set up on the grounds of the École Militaire, a vast military training complex not far from the Eiffel Tower.

The hubbub continued inside the black-painted show space as paparazzi mobbed Kate Moss and Naomi Campbell, lest the world run out of images of two of the most photographed women of all time. Then the lights went down and there began a show in which the models did not walk or strut and stomp, but rather stood stationary as they were conveyed on a moving sidewalk through the entire length of the space.

“The idea was they became like statues,” Mr. Jones told Vogue beforehand.

Yet what the models brought to mind — as they moved past slowly in their gray suits, their scarf-sash jackets, their armoring vest jackets or sweaters with a motif of a woman’s face drawn by the artist Raymond Pettibon — was the unwitting human fodder riding conveyor belts to meet their fate as processed food in the 1973 dystopian cult classic “Soylent Green.”

Often the enforced passivity so central to the marketing and presentation of fashion leaves a viewer feeling unruly. You want to do something transgressive and rude. The thought came to mind during the Comme des Garçons Homme Plus show, a presentation that — despite certain superficial elements of styling (theatrically snarling models done up in black lipstick and fishnets like mall-rat versions of the punk rock vocalist Darby Crash) and the droning guitars of Vowws, a Los Angeles-based band brought in to play for the show — had scant connection to the punk movement that seemed, at first, to be its inspiration.

In fact, on reflection, the collection proved to be subdued and refined, both stately and traditional in its references to archaisms like tailcoats and brocades. Yet the show somehow seemed fueled by some latent discontent, or even anger, as certain of Rei Kawakubo’s efforts have in recent years.

It’s usual for Ms. Kawakubo to offer scant explanation of her methods or thinking; she tends to issue gnomic pronouncements instead. This time “finding beauty in the dark” was her point of departure, as stated in a post-show email.

Though you can read that in a lot of ways, one interpretation is that the darkness Ms. Kawakubo alluded to is political and social. Finding beauty in the dark might, in its way, be a punk position, a subtle rebuke to the run of creative types happy to settle for cranking out journeyman work or for those designers now producing cynical collections whose sole end is corporate glut.