In the Age of the Yellow Vests, Designer Jeans. Really?

PARIS — The Yellow Vests are back in France — albeit not quite in the same numbers as the social and economic inequality protesters once rallied. The world’s oldest travel company just closed in Britain, putting about 21,000 people out of work. There’s so much nervousness about a looming recession, the ’70s seem to be all any designer can think about (followed by that other recessionary decade, the ’90s).

Is this really a time for designer jeans?

Hedi Slimane, artistic director of Celine, certainly seems to think so. Jeans were the Big New Thing (or maybe the Big Old Thing) on a runway that otherwise seemed like a repeat of his last show, back in March, when he about-faced from dissolute rocker youth in tiny party dresses to bourgeois Frenchwomen (yes, the 1970s version) and set off a frenzy for culottes. Back then, he also raised some interesting points about hoodies not being the only kind of streetwear, but people were mostly excited about the culottes.

This time, the culottes were still there; ditto aviators and spiky knee-high boots and lots of blouses. Also some very elaborate gold peasant dresses highly reminiscent of the same Yves Saint Laurent gypsy styles that Anthony Vaccarello referenced in his Saint Laurent collection. (It’s going to be a great 2020 for anyone who loves a gold peasant dress. Also, probably, for Zara.) But this time the above assortment was joined by a whole lot of denim. 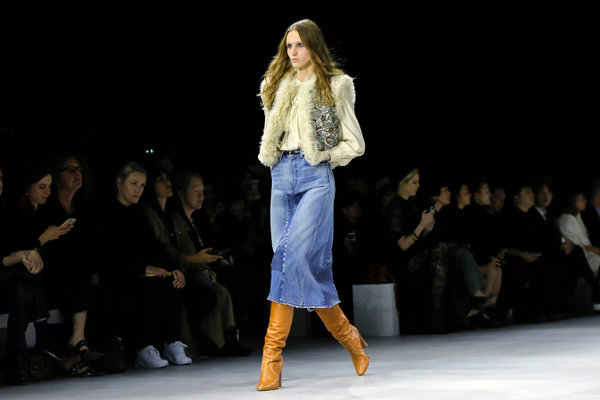 Denim flares and denim shirts and denim jackets; denim peasant skirts and denim patchwork skirts — the kind people used to make themselves by opening the inseams when their jeans got too tight. More denim than in Mr. Slimane’s last men’s show, when his denim first appeared (though some of the denim looks in that collection and in this one were exactly the same). And all of that denim a little faded and worn, and looking exactly like the same kind of denim that could be found digging through eBay or a used clothing store.

Paired with the boots or Converse sneakers and blouses and Mr. Slimane’s parade of jackets — navy blazers, suede patchworks, chubby faux furs, richly embroidered — they looked cool. They looked, one observer said, the way people dress today. Which is true. But not exactly.

How We Actually Dress

People dress in their own jeans and their own Converse, and then throw great jackets on top (if they can afford them); it’s that mix, the embrace of the high/low, that freedom from head-to-toe dictates, that defines modern dressing. It’s not about designer pseudo-old jeans and designer pseudo-Converse and a designer jacket — or it shouldn’t be. Because that’s the definition of fashion victim.

It’s possible that the jeans thing is a subtle commentary on a moment where, thanks to social media and influencer culture, the crowd has begun to drive design, as opposed to the other way around. When that happens, nothing new is ever created — people tend to want more of what they already have, when asked — which may be Mr. Slimane’s point. Though if a point is made and there is nobody there to hear it because they scrolled by it too fast, well … does it make a sound?

Either way, it’s very calculated, and, for a designer as smart as Mr. Slimane, and as talented; for a designer who has taken the familiar (men’s suiting) and reinvented it before, it is disappointing.

The issue is not that Mr. Slimane made jeans. Designers have been playing with jeans for decades — distressing them, ripping them, reinventing them. It’s that he remade them so literally. That he added nothing. And he expects people to pay for it. In a time when authenticity is a supposedly a core value, those jeans seem deeply inauthentic.

Is It Real Life or Is It Fantasy?

It’s not that Mr. Slimane has to free himself from the bounds of actual clothing and enter the conceptual realm, like Kei Ninomiya of Noir. Though Mr. Ninomiya’s 36-look epic poem — which moved from dandelion-fluff bridal pom-poms to skeletal motorcycle leather jackets, spines raised and studded with silver; to towers of human topiary; to oil-slicked nature; and back to light, all crowned by extraordinary living confections of ferns and cactuses by the floral artist Azuma Makoto — was one of the truly transporting moments of fashion month (a hackneyed word not to be used lightly, but one that here genuinely applies). Anyone who doesn’t know his name should know it now.

It’s not that designers all need to express themselves via grand theater in four parts, as Rei Kawakubo did in her Comme des Garçons show, though that was thrilling to see (she is inimitable). Ms. Kawakubo is designing costumes for an opera of Virginia Woolf’s “Orlando,” scheduled to premiere in December in Vienna, and that work has informed this work: a whistle-stop tour from the 16th century to the future told in the language of suggestion, from swathes and swirls of rich floral brocades dripping fabric flowers to a pure black geometric seed pod, ready to birth who knows what?

In between came palatial skirts with croissants of fabric creating width across the hips, frilled frock coats, capes and cavernous sleeves, leather breastplates, some elaborately fringed logomania — much of it speckled with wormholes, the better to slip through time.

And it’s not like there is anything wrong with just really good clothes, like the great parade of (yes, the ’70s again, ish) colorful blazers over crocheted skirts or high-waisted pants at Altuzarra. Sometimes, trying too hard can trip you up, as it did with all the pinstriped ruffles at Nina Ricci. On the other hand, the hats that were handbags that were sand buckets were pretty cute.

It’s that we look to designers to take the familiar and render it new (thus, those sand buckets); definitive of tomorrow as opposed to yesterday. To try to move things forward, instead of appealing to the banality of the day. Leave that to fast fashion.

It’s not enough just to take the generic and recreate it in really gorgeous materials; it’s how you use them that matters. That’s the added value of a designer. That’s what they bring to the party. Or it should be.

You could see it in Junya Watanabe’s meticulous effort to consider the trench: strapless trench gowns and trench corsets; trench schoolgirls skirts and trench gilets and trench redingotes. You could see it in Nadège Vanhee-Cybulski of Hermès and her transubstantiation of the saddlemaker’s apron into elegance via supple leather dresses and tunics that crisscrossed at the back, neat outerwear dangling bridle buckles and perforated cargo pants paired with cool knit tanks.

And you could see it in Haider Ackermann’s luscious gender-agnostic suiting in shades from morning mist to royal purple, as powerful for women as for men; as delicate for men as for women. He also can also make, as it turns out, a really great dress, but he has become to the early 21st-century suit what Giorgio Armani was to the 20th century: a change agent (just ask Timothée Chalamet).

We could use some more of that. 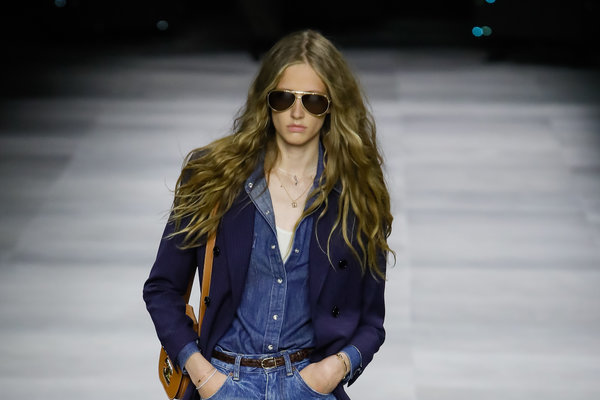 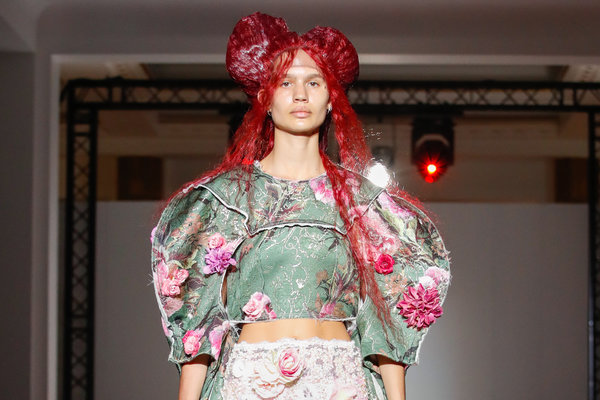 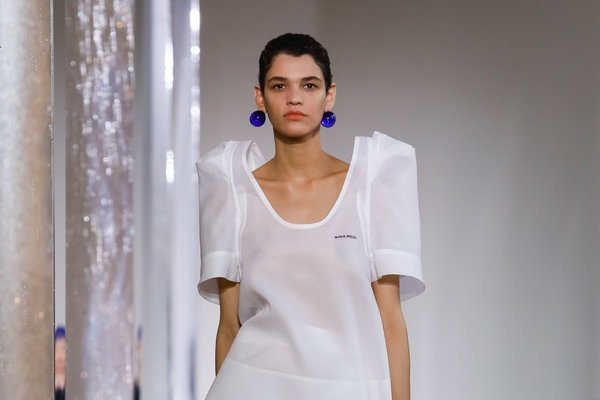 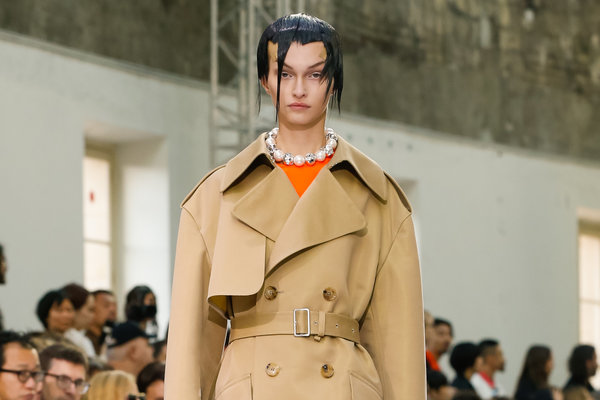 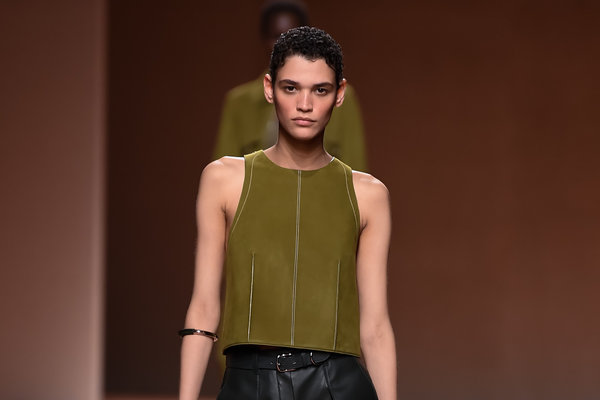 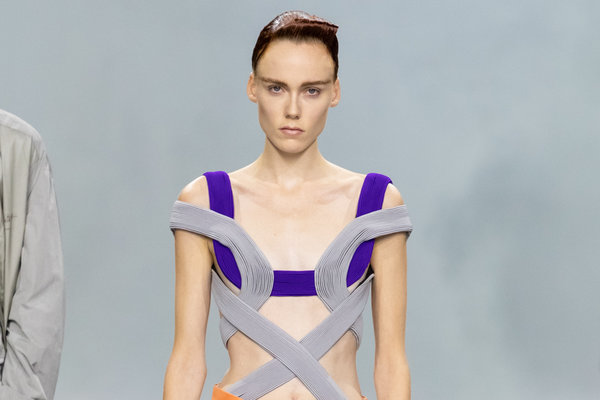