“It’s Never Too Late” is a new series that tells the stories of people who decide to pursue their dreams on their own terms.

Vijaya Srivastava’s first 68 years had been resolutely land-based. She walked the Berkeley Hills in the San Francisco Bay Area, spent time with her young grandchildren, volunteered at the library. None of this required submersion in water, which suited her fine, what with water being terrifying. Fear of drowning was a big issue.

Growing up in India, she never had access to swimming pools. By the time she moved to the United States, the idea of backstroking to and fro simply didn’t occur to her. Then one day her physician mentioned that regular laps would improve her health.

“Have you heard of lessons?” the physician asked.

What followed might have been a long period of pondering that question. That’s not what happened. (The following interview has been edited and condensed.) 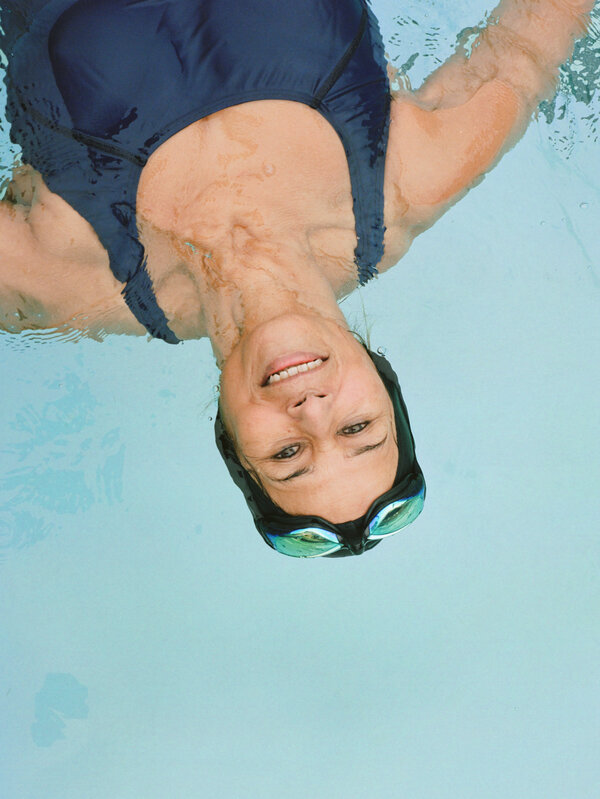 Q: What were your first steps?

A: The first thing I did was ask a neighbor if she wanted to take lessons together. We hired a high school kid, from Albany High. She had lifeguard training — I liked that.

“Have you ever trained a senior?” we asked. She said no. OK.

Once I decided to learn, that was it. I went to the pool on the days between lessons. I started to dream about swimming. I’d wake up excited. When I couldn’t get to sleep, I would swim in bed. My husband would say, “What’s going on? This isn’t a pool …”

I also bought many bathing suits — I thought one of them might be lucky. Later I realized you don’t need 10. I donated quite a few.

Did you do any research into swimming?

After my first lesson, I started to Google. At first I would just watch anything on YouTube had about how to swim. That got confusing. Later my daughter told me about Total Immersion Swimming videos. There’s a guy who gets into the physics of swimming, that helped me a lot.

Also my grandkids would go underwater and watch my breaststroke, or sit in the hot tub and give me thumbs up or thumbs down.

What were the biggest challenges?

Being petrified. Nothing had ever happened to me to make me scared. It was just knowing that I could drown. For the longest time I stayed in the shallow end, four feet. I prayed before every lesson.

And not having enough stamina. My arms and legs weren’t ready. After half an hour I was so tired.

Was there a moment when it all clicked?

After a few months, the instructor started telling me, “It’s time to go to the other end.” I kept saying, “I’m not ready.” She said, “You are.”

Finally I decided if I don’t try, it’s never going to happen. The instructor said she’d be next to me the whole time.

“But you’re so tiny!” I told her. She promised she wouldn’t let me drown.

So I started swimming. When I hit the six-feet marker — I’m 5 foot, 4 inches — I knew there was no turning around. Also, I didn’t know how to turn around.

Finally I made it to the other side. My neighbors from the condominium were over in the hot tub. They’d been watching me struggle for the last few months, and now they all stood up and clapped for me.

I didn’t wave back until I caught my breath and swam back to the shallow end. There’s no way I was taking my hand off the wall in the eight-foot end.

What would you have done differently when you started?

There’s not much I would do differently. Maybe start earlier.

How has your new pursuit changed your life?

When we talk about it — my nephews, my children — they sound so proud of me. Not too many people my age, or in my family, swim. It’s a good feeling that I’ve done this. I talk to my family back home in India. My brother can’t believe it.

I was talking to a friend about learning how to dance — maybe we could take dance lessons?

What would you tell people who feel stuck and want to make a change?

I found it good to have my neighbor swimming with me. We would motivate each other. If I was tired that day, she would say let’s just go for 20 minutes. Twenty minutes turns into half an hour.

Has your experience made you a different person?

Swimming a pool length for the first time at the age of 68 — that will always stay with me. Last Friday I swam 20 laps! It took me 52 minutes. I still take a break after laps. My next goal is to do it continuously, without taking a break. I’ll get there.

What do you wish you had known earlier about being fulfilled?

I have a very good friend who told me to know your body, know yourself — what makes you happy, healthy, angry. That always stayed with me. That helped me a lot.

But there’s not much in my life I would change. If you’re relaxed in your mind, and happy, that brings you health. You don’t need too many things in life.

What lessons can people learn from your experience?

Don’t give yourself an option to give up. I never thought about quitting. If I invest mentally, I don’t quit.

We’re looking for people who decide that it’s never too late to switch gears, change their life and pursue dreams. Should we talk to you or someone you know? Share your story here.