I've stopped carrying a handbag and you can too

Do you carry a handbag? I was once like you. But, now, I am not. Let me help you. 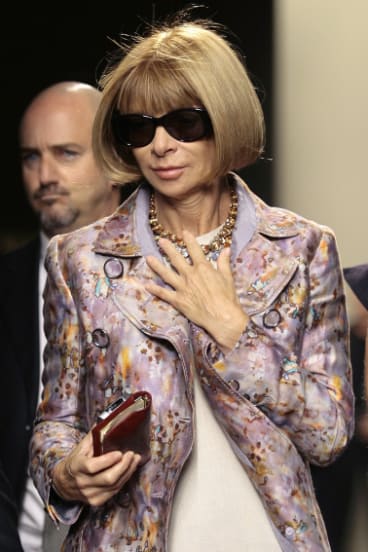 Anna Wintour is known for walking around with her wallet and phone.Credit:Reuters

At the start of this year, my handbag broke. It was not its fault, it was purchased for $20 from Sportsgirl two years prior. Much like a dog year is roughly seven human years, a Sportsgirl on-sale bag year is roughly 41 human years. Thus, it follows that my bag lasted a lifetime and I am an ethical consumer. But, I digress.

Needing to leave the house, I dutifully went to my wardrobe, called the "reserve bag" up from the bench, and began to decant items from one into the other.

Many of these items had simply expired, either in their relevancy to my life or literally, as indicated by the stamp on their packaging: a wad of paper from a university subject I finished months prior, an opening weekend voucher for a pizza place, and some cream a doctor once gave me for a mosquito bite allergy.

But then there were the things I had in there "just in case": five pens (in case I developed the dexterity to use one with each finger), approximately 200 bobby pins (in case I received a surprise, on-the-day bridesmaid position, and was required to create an elaborate updo at short notice), and that cream a doctor once gave me for a mosquito bite allergy (in case it is better to treat a rapidly growing red welt on your arm with an expired ointment than none at all).

The bag also contained an inexplicable amount of "emergency" make-up items for someone who just smears foundation across their face each morning. When did I think I was going to reapply all of these lipsticks I had never applied in the first place? Would I suddenly decide to become a person who wears mascara after happening upon it at the bottom of my handbag?

I looked at these many things, stuffed into this new, smaller bag. I had been experiencing a sore right shoulder for a while, and its cause was suddenly apparent.

Emptying the new bag, I singled out the things I really needed to go out that day. There were three: my wallet, my keys and my phone.

I put the keys in my wallet's change pocket and left the house.

At first it felt strange, being without a handbag. It was as if I was doing a very long run to the corner shop, impermanent and non-committal. But, I haven't carried one since.

They fit in the change pocket of my wallet.

I wear the strap around my wrist.

How do you carry literally anything else?

I don't, bar a couple of hair things (a tie and two bobby pins) which also live in the change pocket.

Part of having so much stuff in my bag, I think, was that I liked being the person who could help out. Need a tissue? I've got them. Tampon? Here for you. Paracetemol? I honestly can't remember the last time I took one but I've been carting around an entire box for the past two years. Have they expired? Who knows! Please sign this waiver.

Yet, these situations were so rare. Beyond handing out pens in university lectures, I can't recall a time when having a bag full of stuff was genuinely of use. If you are a carer for a child or other loved one, or have a particular medical condition, you might need a whole manner of things on your person. I do not. I just believed carrying a handbag was something I should do, which is a rort for two reasons:

2. The expectation that someone will carry a handbag is ridiculously gendered. Men have been getting around without a handbag just fine. Don't give them a place to put their jumper when they're too hot; they should have brought a bag.

Of course, I do sometimes carry a bag. I have a backpack I take to work, the supermarket and social sport; places I need to transport bulky items to and from. But I've found most other occasions simply do not warrant the ceremony. Hats, water bottles, even laptops: these can all be carried in your hands.

So, if you are able, I encourage you to check your baggage. Start small, maybe just for a morning, before building up to a full, clutter-free day.

Because, I must report: my right shoulder is feeling great.