Judd Apatow has collected autographs since he was a boy. He began when he was about 9, and would write to celebrities — Jackie Gleason, Gilda Radner, Andy Kaufman — begging them to send signed photos.

In high school, he cased autograph conventions. “I bought Harry Truman’s,” Mr. Apatow said. “I was very impressed with myself.” He has never stopped, although he knows it is “a very obscure dad hobby.”

Mr. Apatow, 51, was walking into the Argosy Book Store in Midtown Manhattan, the sanctum sanctorum for autograph hounds, gulping down a brownie and an alkalized water. In New York to promote the third season of “Crashing,” which he produces, his schedule hadn’t allowed for lunch.

He brushed down his sharp checked blazer and entered, greeting Naomi Hample, an Argosy owner and autograph cicerone. “He horrifies me sometimes,” Ms. Hample said of her loyal and occasionally relentless customer. “He combs through my desk.”

Still, she presented Mr. Apatow with a complimentary Argosy T-shirt and led him toward the rickety elevator that would hoist him to the sixth floor, where the autographs are kept. (The elevator then promptly broke.)

Mr. Apatow scanned the framed autographs behind Ms. Hample’s desk. “Here’s a Maurice Sendak,” he said. “That’s pretty good.” He moved on to a Frank Sinatra and a Mark Twain. “Would I want Brigham Young’s autograph?” he asked himself. “I performed at Brigham Young University when I was 19 years old. And the audience was very polite.”

Handling the framed autograph, he nearly dropped it. “Oh, geez. Can I break things?” he asked Ms. Hample.

“And is this Queen Elizabeth?”

He already had a Queen Elizabeth. “Isn’t that weird? I’m trying to think if I bought it from you.” 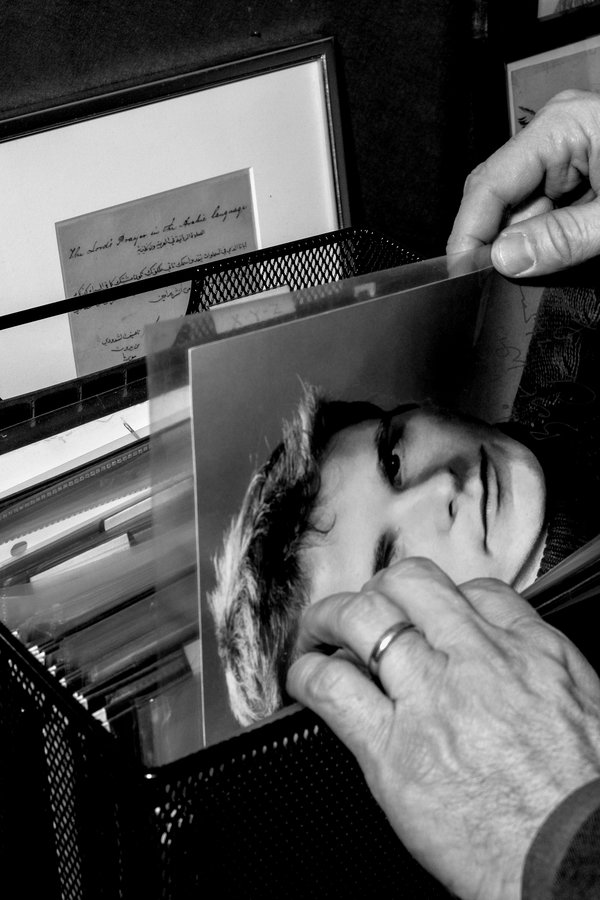 He considered an Andy Warhol and a signed Peanuts cartoon. Ms. Hample tried to interest him in a letter from Sigmund Freud, which included a reference to a “15-year-old hysterical child.” Mr. Apatow thought about hanging it in his younger daughter’s room.

But his daughters don’t share his hobby. “It would be their worst nightmare,” he said. “I’ve never found anyone who was interested in looking at any of it.” He said he probably showed them to his wife, the actress Leslie Mann, when they first met. “She was horrified, but polite,” he said.

He noticed a framed letter from Phil Silvers, a comedian of the 1950s. “Now you’ve got me!” he said. “I like weird letters from comedians.”

Mr. Apatow recently returned to standup comedy, which he had abandoned not long after that Brigham Young gig. He includes a penmanship joke in his new set (“Anything my daughter writes looks like a letter from the Zodiac killer to the police”) and complains about how schools don’t teach cursive writing anymore.

“I get very mad at friends who have no autograph,” he said. “Lena Dunham, her autograph is like one twisty line. Amy Schumer, too.”

Is Mr. Apatow’s signature legible? “I do make an effort,” he said. But no one wants it. He receives maybe three autograph requests a year.

“I’ll go on eBay to see what they sell for, and no one is making any money on my autograph,” he said. (He may have a point.)

His protégés’ autographs probably sell better. Mr. Apatow is known as an ace talent spotter: Ms. Dunham, Ms. Schumer, Seth Rogen, the “Crashing” star Pete Holmes and others. “I think it’s the same as being an autograph collector,” he said. “It’s just the part of me that hunts down interesting, funny people. Except now, I try to get them to make something with me.”

Unfortunately, most of the interesting, funny people on Argosy’s sixth floor are dead. After looking at a signed book by Mel Brooks and then one by Steve Allen (“the first person I ever interviewed”), he started pawing at the unsorted autographs on Ms. Hample’s desk: Cole Porter, Leo Tolstoy. Did she have any Johnny Carson? Not this time.

A stack of Adolf Hitler’s official stationery stopped him cold, but he was warmed by a photo of Annie Oakley, a fabled sharpshooter.

Mr. Apatow thumbed through signed Playbills. “It’s all Rex Harrison. Rex Harrison and Angela Lansbury,” he said. But he found a few treasures, including a “Dracula” Playbill signed by Frank Langella.

When Mr. Apatow’s parents divorced when he was 12, his maternal grandparents took him to the “Dracula” revival to cheer him up. A little while later, his father showed up with more “Dracula” tickets, so he saw it again. “That’s like a very strong divorce memory,” he said.

He began to browse more quickly, moving from display wall to display wall, past letters by Richard Pryor, Milton Berle and Kurt Vonnegut. “Yeats. Maybe I need a Yeats,” he said. He considered a John Ritter photo — a possible present for Mr. Holmes — and a photo signed by the Platters, a group his grandfather had briefly produced, made out to Roy Cohn.

He piled up his maybes (mostly comedians including Phil Silvers, George Jessel, Gene Wilder, Mel Brooks, along with Ray Liotta, Bing Crosby and assorted Playbills) and left the pile with Ms. Hample, who would sort through it, email him the prices and then mail him his selections.

“I need a little distance,” he said as he marched down the five flights. “I need to get away from my instinct to get too much. I go home and I think, ‘Would I really hang up an autograph of the Platters to Roy Cohn?’ Sometimes I go, ‘You know what? I would.’”