Why Kate Middleton's wedding outfit was a poor choice 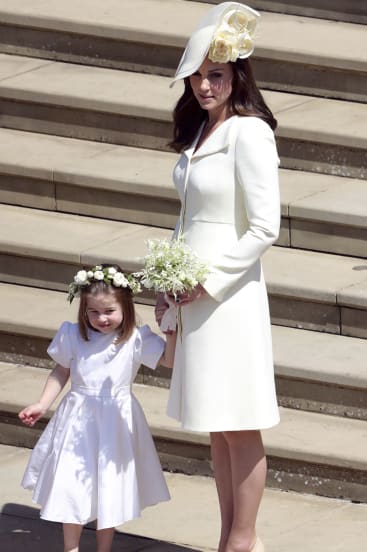 The Duchess of Cambridge and Princess Charlotte arrive at the wedding of Prince Harry and Meghan Markle on Saturday.

My brother got married just over four years ago. I was fortunate enough to be a bridesmaid but even if I hadn't been, I am 99.9 per cent certain I would have bought a new dress anyway.

Now, I am not swimming in money like the royal family but buying a new frock for your brother's wedding (or brother-in-law's) is the Right Thing to Do. It says, "Hey, I am excited enough for you to throw some cash at this shindig, and I want to look my best, in something I bought with YOU in mind."

Which is why the Duchess of Cambridge's choice of outfit for Harry and Meghan's wedding is all the more perplexing.

The outfit itself, a primrose yellow coat and dress by Sarah Burton of Alexander McQueen, the same designer who made her wedding dress in 2011, is nice but far from being one of Kate's greatest hits.

In a communique from the palace press team on Saturday, which helpfully outlined what each of the royals were wearing, it failed to mention that Kate had worn the outfit to Princess Charlotte's christening, and the Queen's birthday celebrations, not to mention on a royal tour of Belgium in July 2017.

Now, there are some positives here. I dig the sustainability vibe of re-wearing a dress, and count myself in the #30wears club; and I love that Kate wore the designer who made her wedding gown, adding to the tally of female designers who dressed the wedding party.

Kate is also known as a serial re-wearer and hats off to her for working that cost-per-wear ratio on some of her designer outfits.

And yet. If Kate's intention was to make it all about Meghan and not about her, by wearing an outfit she had worn before, she pretty much achieved the exact opposite.

Had Kate consulted Burton and said, "I want something new but low key," I have no doubt the designer would have delivered. Heck, she could even have said, "Let's alter this lovely thing I have in my expansive wardrobe so that it looks new because upcycling is my jam."

Instead, Kate made the poorest choice available to her, inviting more headlines than her outfit was worth. People watching television even thought the pale yellow looked cream, another major faux pas for anyone attending a wedding.

Had she been attending a function where she was the host, sure, wear whatever you like. But for her brother-in-law's wedding, one which had been engulfed by more controversy than a reality TV show (except this time, it was real), Kate should have shown more tact and bought a new frock. Because, with the wedding costing a reported $60 million, it's not like an extra few hundred quid would have raised any eyebrows.