So maybe Kylie Jenner has never shown a strong interest in football before, but her parent, Caitlyn Jenner, is an athlete after all. Let’s be real, though, Jenner is definitely there to support boyfriend and Stormi’s dad, Travis Scott who performed. But Kylie Jenner’s Super Bowl outfit may have just stolen the show because while she was sporting a really large fur coat, she was also sporting a really big ring on that finger. Could it be an engagement ring? There’s been no word yet, but the youngest member of the Kardashian-Jenner family supporting her boyfriend was definitely one of the sweetest moments from the game.

Earlier in the evening, Jenner took to her Instagram account to post a video of herself in the car on the way to the game. In the video, Jenner could be seen wearing what appeared to be an all black ensemble which could be pretty simple for such a major event, right? Well, you underestimate, Jenner. The reality star and Kylie Cosmetics mogul paired the black top with a massive grey fur (or maybe faux fur) coat. Of course, once she got to the game, she may have just added another detail.

In a photo of Jenner posted by Scott following his performance, Stormi’s mom is rocking all black with the same fur coat and a gorgeous (and huge) diamond ring. 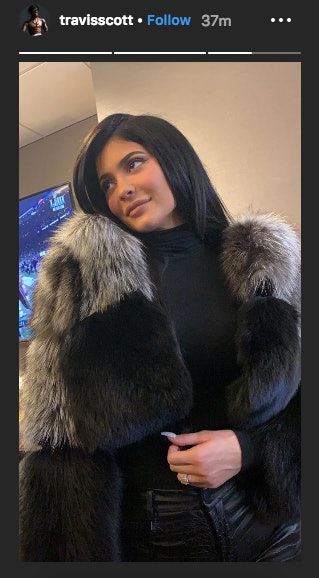 While Jenner’s Super Bowl outfit was exciting, the one thing that fans couldn’t stop talking about before her appearance was whether or not Scott would propose during the half time show. While he didn’t actually get down on one knee during the performance, with a ring on her finger post show, it’s hard not to be suspicious. After all, the pair have been inseparable since they started dating, and now, they’re the parents of adorable baby girl Stormi Webster who just turned one.

It’s also no wonder a ring like that might cause some rumors to get started. The day before the big game, Jenner took to her Instagram account to post a cute photo of she and Scott cuddling on a set of stairs. Photos of the pair looking adorbs AF aren’t exactly new, but it was Jenner’s caption that had people excited. The photo commentary read, "Baby #2?" Plus, in another photo of Jenner alone, she seems to be wearing the same ring on her left hand. Could Scott have actually proposed the night before the Super Bowl? Maybe.

It’s not just the appearance of a ring at the Super Bowl that would make fans think about a proposal. Scott himself has mentioned it. In an interview with Rolling Stone, the rapper actually explained that the pair will get married, but he’s "gotta propose in a fire way.” Why not Super Bowl weekend? 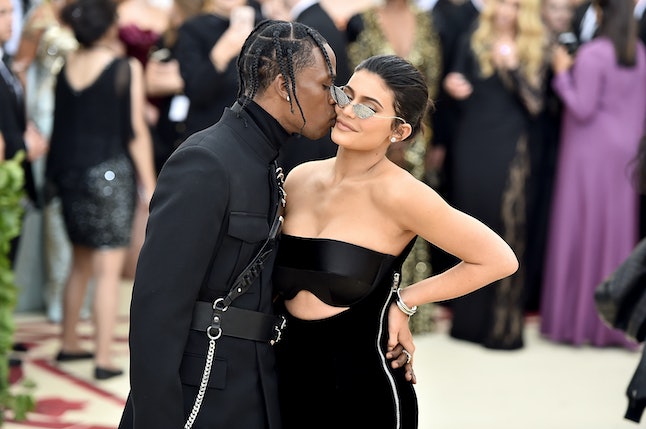 Is Kylie Jenner’s ring at the Super Bowl that kind of ring? As of press time, there’s been no word from Scott or Jenner, but while her fur was big, that ring was bigger, and it’s hard not to get a little excited for a Jenner Scott wedding.