It's not every day that international supermodel Kendall Jenner is upstaged by an inanimate object.

But the Tiffany Diamond, which Lady Gaga wore to the most recent Oscars and based on its price in 1878 is said to be worth about $US30 million ($42.4 million) but is likely worth more, is no ordinary rock. 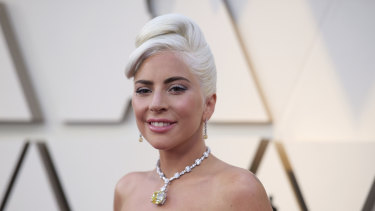 (It is also far more rare and precious than an egg, which was used by a canny Instagram user to outdo Jenner's sister Kylie for the most number of likes on a post, which was previously 18 million.)

And for one night this week, the gemstone and Jenner will be in the same room, for the launch of the new Tiffany & Co Sydney store.

The 128.54-carat yellow diamond, which weighs 125 grams and is set in a necklace of more than 100 carats of diamonds, arrived in Australia this week under tight security and will be on display for a couple of weeks at the store in Sydney's CBD. 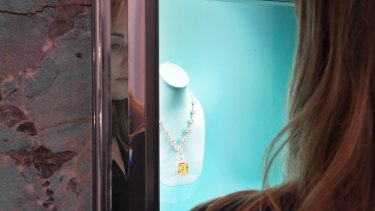 The 128-carat Tiffany Diamond, as worn by Lady Gaga at the Oscars, is visiting Australia for a limited time to coincide with the launch of Tiffany & Co’s new Sydney store.Credit:Nick Moir

The stone, which is kept at the brand's Fifth Avenue store in New York City, will remain behind glass during its Australian visit. Still, chief executive Alessandro Bogliolo said any woman from history chosen to wear the stone must be "strong and pioneering", qualities he said are definitely shared by Australia.

Mr Bogliolo said it was a "tribute" to the importance of Australia to the brand that the diamond has made the rare journey from its US base.

Only three women have worn the stone in its 142-year history: Mrs E. Sheldon Whitehouse, in 1957, actress Audrey Hepburn, in 1961 to promote the film Breakfast at Tiffany's, and Gaga. 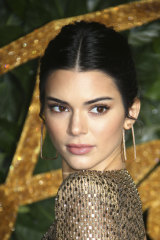 Model Kendall Jenner is coming to Sydney for the Tiffany & Co store launch.Credit:Invision

After the Academy Awards, Tiffany & Co's creative director, Reed Krakoff, said the A Star is Born actress was an ideal choice to wear the yellow gem because she "is someone who embodies the creative, modern archetype that we see as ideal".

Mr Bogliolo, who joined the company in 2017 after roles at Sephora and Diesel, said initiatives such as bringing the Tiffany Diamond to Australia was about "bringing the brand into the future", including providing multiple entry points from $100 to pieces priced well into six figures.

He pointed to the jewellery "bar" in the new store, where customers can try on items without the incumbrance or intimidation factor of glass casing.

"We are, in effect, turning the traditional idea of the jewellery store, where everything is behind glass, on its head," he said.

The company recently reported softer than expected quarterly sales figures, which Mr Bogliolo said was in part due to slowdown in purchases by Chinese tourists abroad. Still, China is an "accelerating" market for the company.

"China is important for all fashion brands but it needs to be understood, to be treated with respect," he said.

The flagship, one of only 10 in the world, includes installations by several Australian artists including Anna-Willi Highfield. A "high jewellery" collection, featuring some of the most expensive items made by the company, is also housed in the new store.

The reporter travelled to Sydney as a guest of Tiffany & Co.