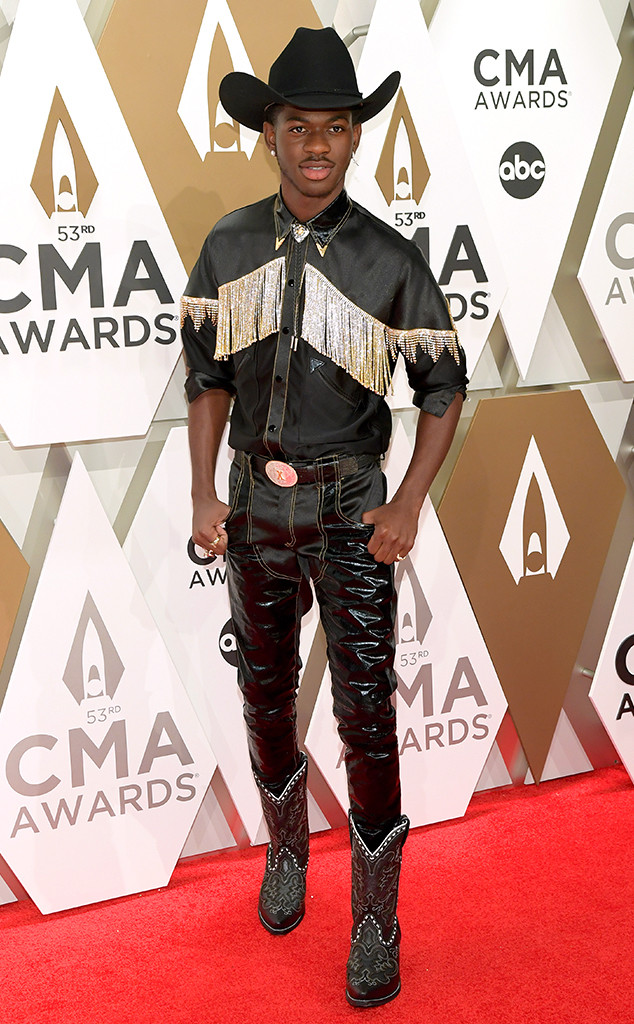 Lil Nas X might be taking a break from music but he’s still making time to hit the red carpet.

The 20-year-old who first took the world (mostly the internet) by storm for his viral sensation “Old Town Road” just made his first red carpet appearance since he announced he was taking a break from music. In case you missed it, the young star announced back in September, via Twitter, that he was “ready to take a little time off” following a “wild” seven months.

“sorry to everyone attending twitchcon or the sandbox music festival, i will not be there. i love u guys and will make it up to you in some way,” the rapper continued.

After making history for having his country rap breakout single, featuring country superstar Billy Ray Cyrus, on Billboard’s Hot 100 for 19 consecutive weeks (the only song to do since the chart began in 1958), the young Georgia native felt it was time to take a step back.

But tonight, he’s stepping out for the 2019 CMA Awards to claim what’s his. The young rapper was nominated for Musical Event of the Year for “Old Town (Remix)” and won!

On Wednesday morning, the official Twitter account for the Country Music Association made the announcement. “Congratulations to @LilNasX and @BillyRayCyrus for winning #CMAawards Musical Event of the Year for “Old Town Road (Remix)”. The winner was just announced on @GoodMorningAmerica!”

Shortly after, Lil Nas X took to Twitter to address the win, writing in a separate tweet, “LETS GOOOOOOOOO!!!!!”

He also took to Instagram to share his excitement. “FIRST COUNTRY MUSIC AWARD WIN!,” he wrote in his caption. The “Panini” singer has also earned the MTV Video Music Award for Song of the Year (again for “Old Town Road”).

And for his 2019 CMA Award red carpet look? The rapper looked his best, wearing an all-black cowboy suit combo with gold fringes and a black cowboy hat.

Whether he’s still sticking to his word of taking a break from music even after his first CMA win, nobody can tell him nothing. Congratulations, Lil Nas X!