Moving the Logies from Melbourne to the Gold Coast was always going to throw up some fashion surprises and on Sunday night, the stars of Australian television didn't disappoint. 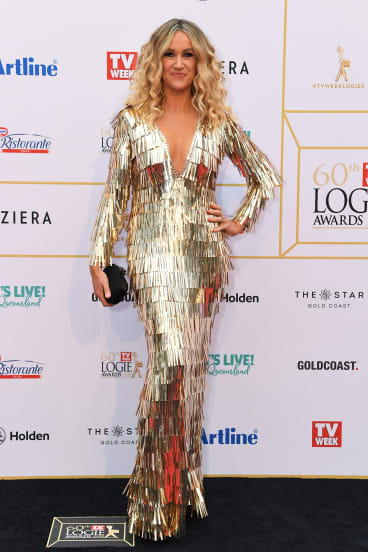 There were those who took the glitter strip memo quite literally, such as A Current Affair's Leila McKinnon, who was the star who most closely resembled the gold Logie. Her Constantina and Louise creation was reportedly described by her husband, former Nine boss and sometimes James Packer sparring partner David Gyngell, as "glammed-up meter maid", a nod to the bikini-clad girls who patrolled the Surfers Paradise car spots in the 1980s.

While there was no sign of the ultimate expression of 1980s Gold Coast tackiness, Warwick Capper, The Bachelorette's Georgia Love brought the mullet to the party in the form of a Cappellazzo Couture "mullet dress" in a shocking violet, which was one of the standouts on the red carpet.

Another perpetual standout, ex-Neighbours star Olympia Valance, did her best to outdo the tallest skyscraper in Broadbeach in a Con Ilio dress that would not have been out of place at the religious-themed Met Gala in May.

Another focal point was power couple Karl Stefanovic and Jasmine Yarbrough, dressed in Tom Ford and Toni Maticevski respectively. The pair, who were styled by Melbourne-based Elliot Garnaut, were making their red carpet debut ahead of their wedding, which will take place this summer in Mexico. 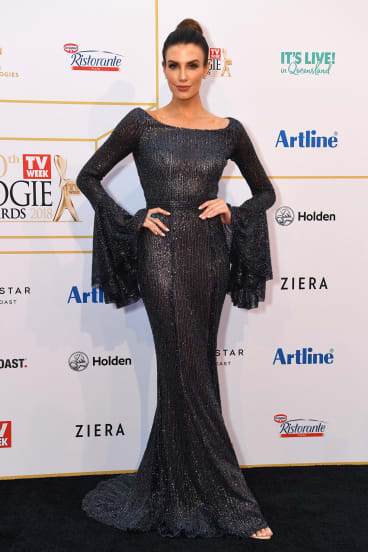 Yarbrough, who is one half of flat-shoe brand Mara & Mine, left her loafers at home and instead opted for towering Stuart Weitzmann heels, which she teamed with a 3.1 Phillip Lim bag that looked like she'd borrowed a kettlebell from the local gym.

As in previous years, there were several stars "dressing for two", with Carrie Bickmore, in Paolo Sebastian, leading the line-up of expectant mums on the red carpet. Gold Coast news presenter Liz Cantor framed her growing bump in a bubblegum pink House of Ezis backless gown, while Lovechild's Sophie Hensser looked dreamy in a full-skirted ivory dress.

One of the defining features of this year's red carpet was the preeminence of the celebrity stylist, with Sydney's Donny Galella dressing a record 12 celebrities for the event, including Julia Morris and Sophia Forrest.

Not excluding the men, Galella also dressed I'm a Celebrity … Get Me Out of Here host Dr Chris Brown.

"[Chris] stepped away from the usual black or blue tuxedo options, with a custom-made merlot coloured jacket. I think it’s about time men start to have a bit more fun on the red carpet. I love the black contrast silk lapel and button detail," Galella said.

Other dominant trends on the red carpet included one-shouldered gowns, as seen on Sylvia Jeffreys and Shelley Craft, and nude or blush tones.

Ahead of the red carpet, television veterans Lisa Wilkinson and Tracy Grimshaw received widespread praise on social media for posting selfies without any make-up. Wilkinson's "after" look was a forest green gown with applique flowers by Andrew Gn, while Grimshaw chose a bright red gown with billowing sleeves.