Dyanna Villaluna Quizon prepared for her first date with Dane Clifford Volek the way most 31-year-olds in 2015 would: She looked him up on the internet. The trouble was, she couldn’t really find anything.

But finding nothing told her something — that this was a person who might naturally balance her own lifestyle.

“Dane is very old-school,” Ms. Quizon said. “He’s not on social media, he has this really old, ancient Samsung phone.”

“I’m the complete opposite,” she added.

Ms. Quizon and Mr. Volek had met days before, at a celebration of “Back to the Future” day — Oct. 21, 2015 — at the Make Out Room, a nightclub in San Francisco. The event was put on by Anchor Brewing Company, where Mr. Volek works as a brewer.

Mr. Volek had been in a long-term relationship that had recently ended. He was having a beer at the event with a co-worker, who insisted that Mr. Volek should go up and introduce himself to a pair of women standing at the bar.

“He was kind of trying to get me back out there and give me his two cents on everything,” Mr. Volek said. “Which I definitely never asked for.”

But the co-worker was insistent. So Mr. Volek walked over and introduced himself to Ms. Quizon and a friend, telling them that he worked at the brewery.

“I, being a very big aficionado of beer, was instantly interested,” Ms. Quizon said. 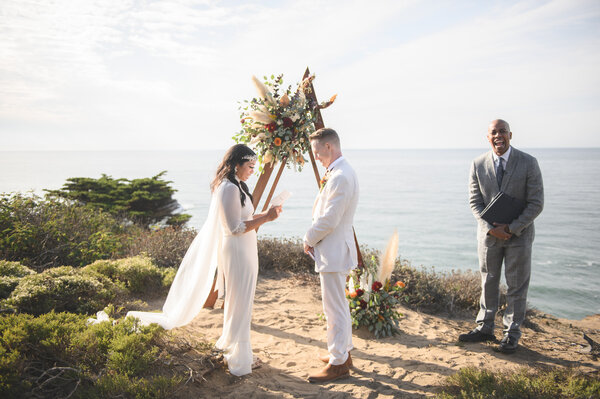 They made plans to go out soon after.

During one of their first dates, Mr. Volek asked Ms. Quizon what her favorite book was. She told him: “Pride and Prejudice.” He went out and bought a copy.

“He read it in a couple of weeks just so that we could connect,” Ms. Quizon said. The gesture touched Ms. Quizon, who had just come out of what she described as a string of bad relationships. Mr. Volek felt like a gust of fresh, gallant air.

When Ms. Quizon asked Mr. Volek what his favorite book was so she could return the favor, he pointed to “The Pillars of the Earth,” the 1989 work of historical fiction by the Welsh novelist Ken Follett. The book runs more than 800 pages, depending on the edition. Its length compelled Ms. Quizon and Mr. Volek to establish one of their first traditions as a couple: reading aloud.

“We started reading a few pages to each other at night,” Ms. Quizon said. “Which meant it took us like 6 months to get through that book.”

In the months that followed, Mr. Volek and Ms. Quizon also bonded over a mutual love of live music. After a rave one night in 2016, Mr. Volek told Ms. Quizon that he loved her. “It was just after we had gotten home and had gotten ready for bed and were tucking in,” Mr. Volek said. “It just seemed like the right time.”

In August 2017, the couple went to a music festival in Oregon that was timed to the total solar eclipse that month. When the moon passed in front of the sun, Ms. Quizon asked Mr. Volek whether he would be her life partner. He said yes.

Ms. Quizon, 36, a government affairs manager for the San Francisco International Airport, and Mr. Volek, 34, a pilot brewer for Anchor, were married Nov. 11 at Sutro Baths, a landmark on the Western coast of San Francisco. Paul Henderson, the director of the San Francisco Department of Police Accountability and a former boss of the bride, officiated. He was deputized through the San Francisco Country Clerk’s Office.

The ceremony included a wedding video with music by one of the couple’s favorite artists, the San Francisco musician Tycho (whom they contacted to secure rights), and a “champagne toast” — with beer, naturally.

Ms. Quizon and Mr. Volek originally planned to go on a honeymoon next month in Argentina, where they would have been in the path of another total solar eclipse. The pandemic forced them to scrap those plans. But the moon will pass in front of the sun that day all the same. And though Ms. Quizon and Mr. Volek won’t be there to see it, they will still be together.