A MATERNITY ward has shared a rather creative way of educating mums-to-be on how dilated their cervix will become during labour.

Using a selection of different sized Easter eggs, Royal Devon and Exeter Maternity Services posted a guide on Facebook – but mums-to-be have revealed they'll "never look at chocolate in the same way again". 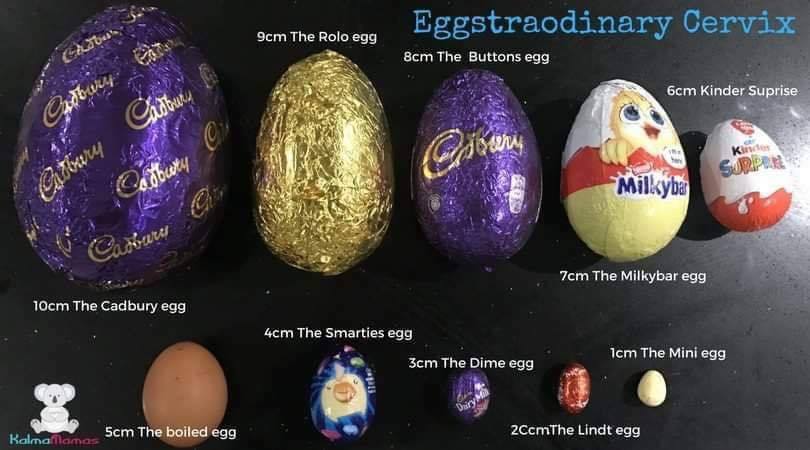 Using one egg for each centimetre dilated, the hospital wrote: "For all the chocoholics out there a good way of knowing how dilated the cervix is in labour."

According to the diagram – titled "Eggstraordinary Cervix" – at the start of labour when dilated by just 1cm, the cervix is the size of a mini egg.

The mum-to-be then progresses through to 2cm – the size of a Lindt chocolate egg before reaching 3cm – represented by a Dime egg.

The later stages of dilation were illustrated using a Milkybar egg for 7cm, followed by a Button egg to represent 8cm dilated.

When the cervix dilates to the size of the Rolo egg, it's almost time to push for the mum-to-be.

And finally, at 10cm – represented by the Cadbury egg – the cervix has reached the size it needs to be for the baby to pass through.

And while the guide was certainly useful for parents, one woman revealed she didn't know "whether to be traumatised or impressed".

Another wrote: "Glad I didn't see this before" while one woman claimed her Easter was now "ruined".

One tagged a friend – who is presumably a midwife – and wrote: "I can imagine you saying to a patient, 'OK, you're not ready yet. You're about a Buttons egg.'"

One woman even said it could "put [her] off Easter eggs for life".

Thousands of women commented on the Facebook post, with one noting the difference between a baby's head and a Cadbury egg, commenting: "But a water melon has to get through the Cadbury’s egg… slight size difference."

Hundreds of women, however, were tagging their pregnant pals, with one woman admitting the guide made it "so much easier to understand the potential size of [her] cervix".

Earlier this week, we told you about the doting nurse who adopted a little girl who had no visitors for five months during hospital stay.

We also revealed parents’ outrage as school bans pupils from giving out birthday invitations ‘because it could hurt feelings of those who miss out’.

And we showed you the first-time mum, 26, who filmed the birth of her son for YouTube and more than one million people have watched.