Second-year student Abbie Colvin, now 20, from Poulton, Lancashire, spent a year being treated with antibiotics for cystitis as she was experiencing bleeding during sex. 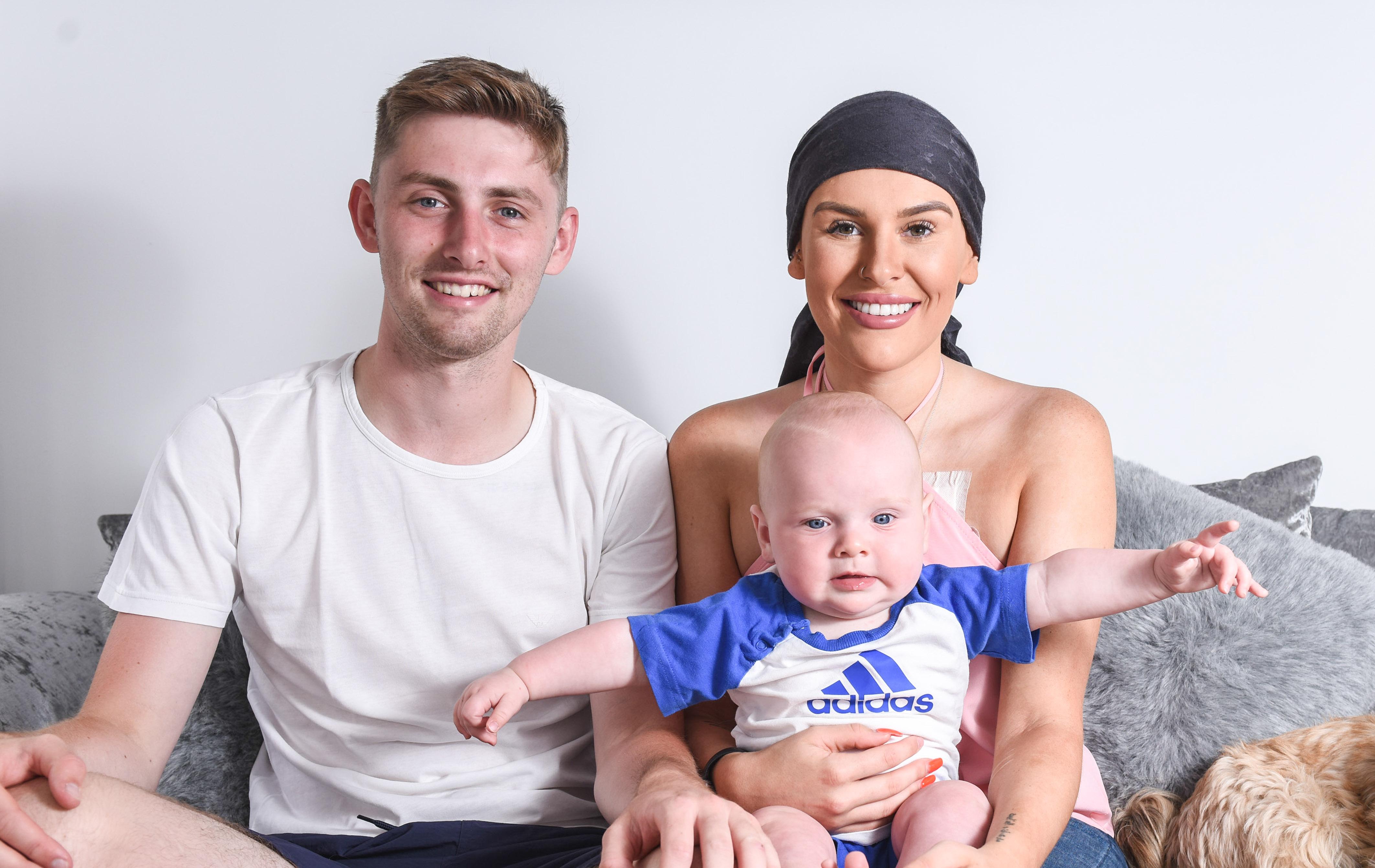 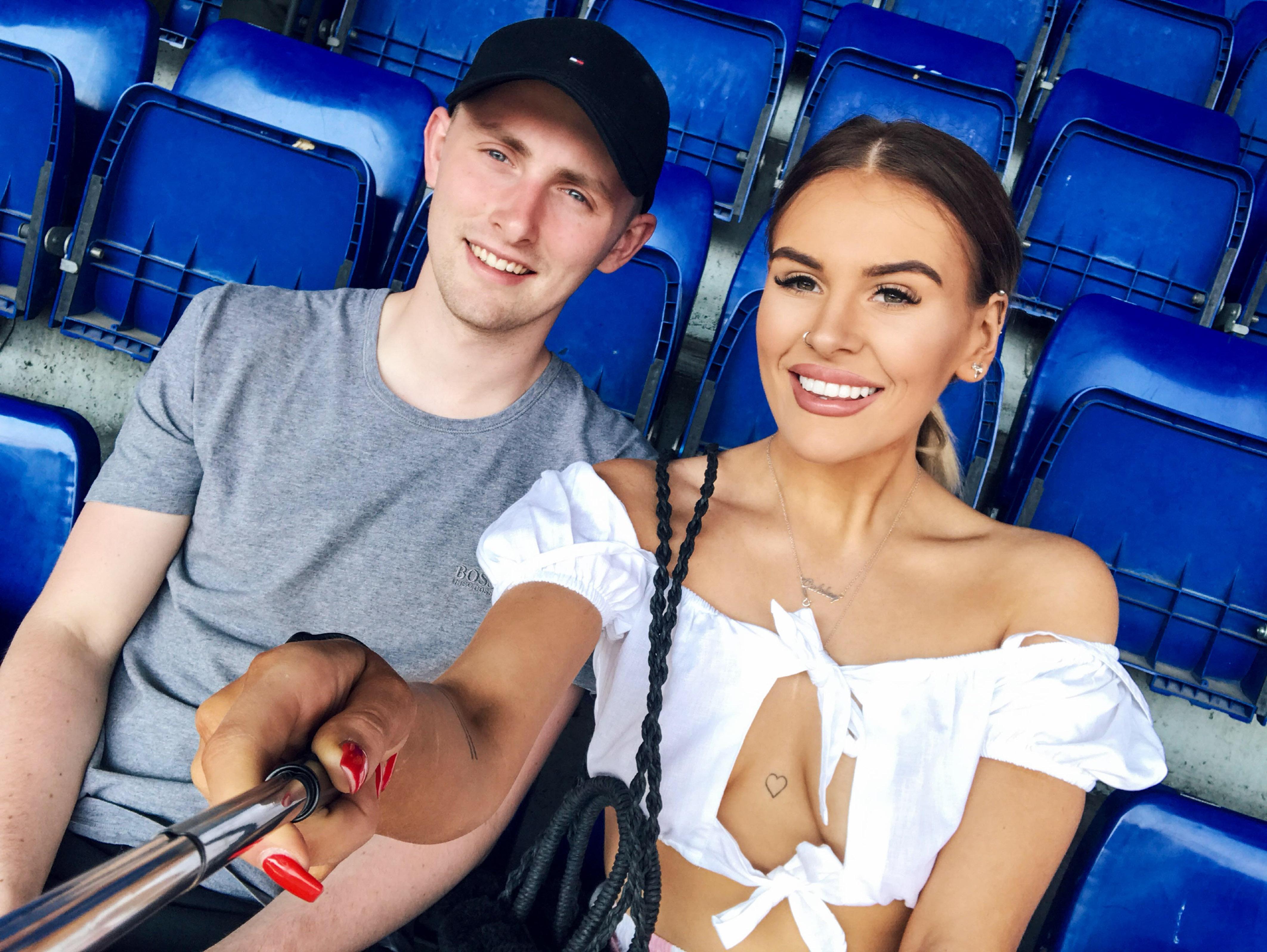 Despite being offered chemotherapy during her pregnancy, Abbie wasn't willing to take any risks as she knew this may be her only chance to carry her own baby.

But when she went to the doctors for sexual health screening in September 2016 after meeting her partner Oakley Buchanan, 21, tests revealed a problem with her cervix.

The biomedical science student received the news that she had cervical cancer in January 2017 and was ‘heartbroken’ when doctors told her she would eventually need a hysterectomy.

After accepting she would never have a baby, Abbie went in for laser treatment to target cancer cells on her cervix in April 2017 – but a precautionary urine test revealed she was already pregnant. 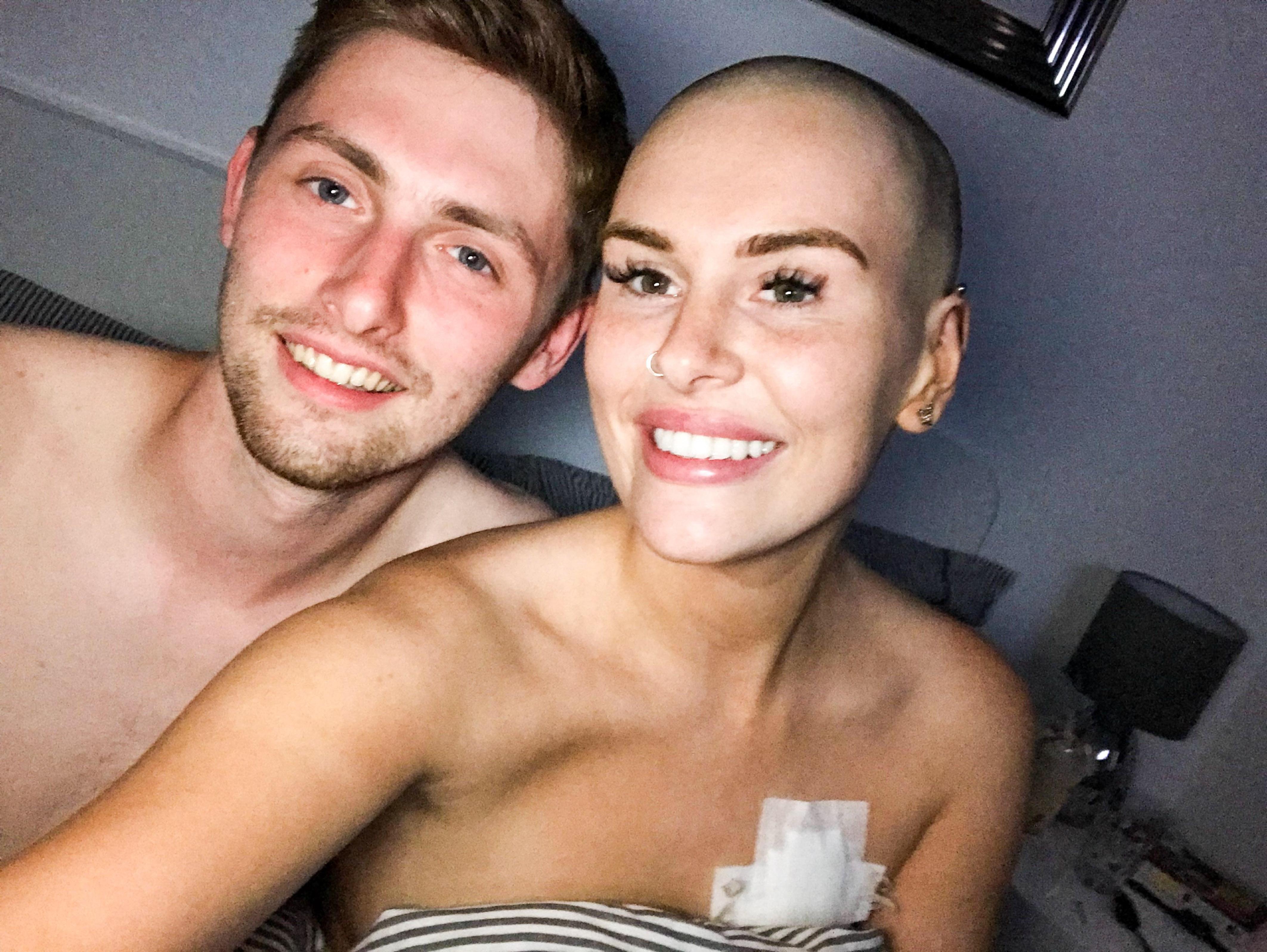 ‘Miracle’ baby Oscar Buchanan, seven months, was born healthy on December 12 and Abbie started three gruelling rounds of chemotherapy two weeks later – which she fought through while completing her exams.

And the inspirational young mum, who is now in her final round of chemo, is rejoicing in raising a happy little boy, getting a first and battling cancer all at the same time.

Abbie, who studies at Manchester Metropolitan University, said: “When they told me I couldn’t have children due to needing a hysterectomy, I was just heartbroken. 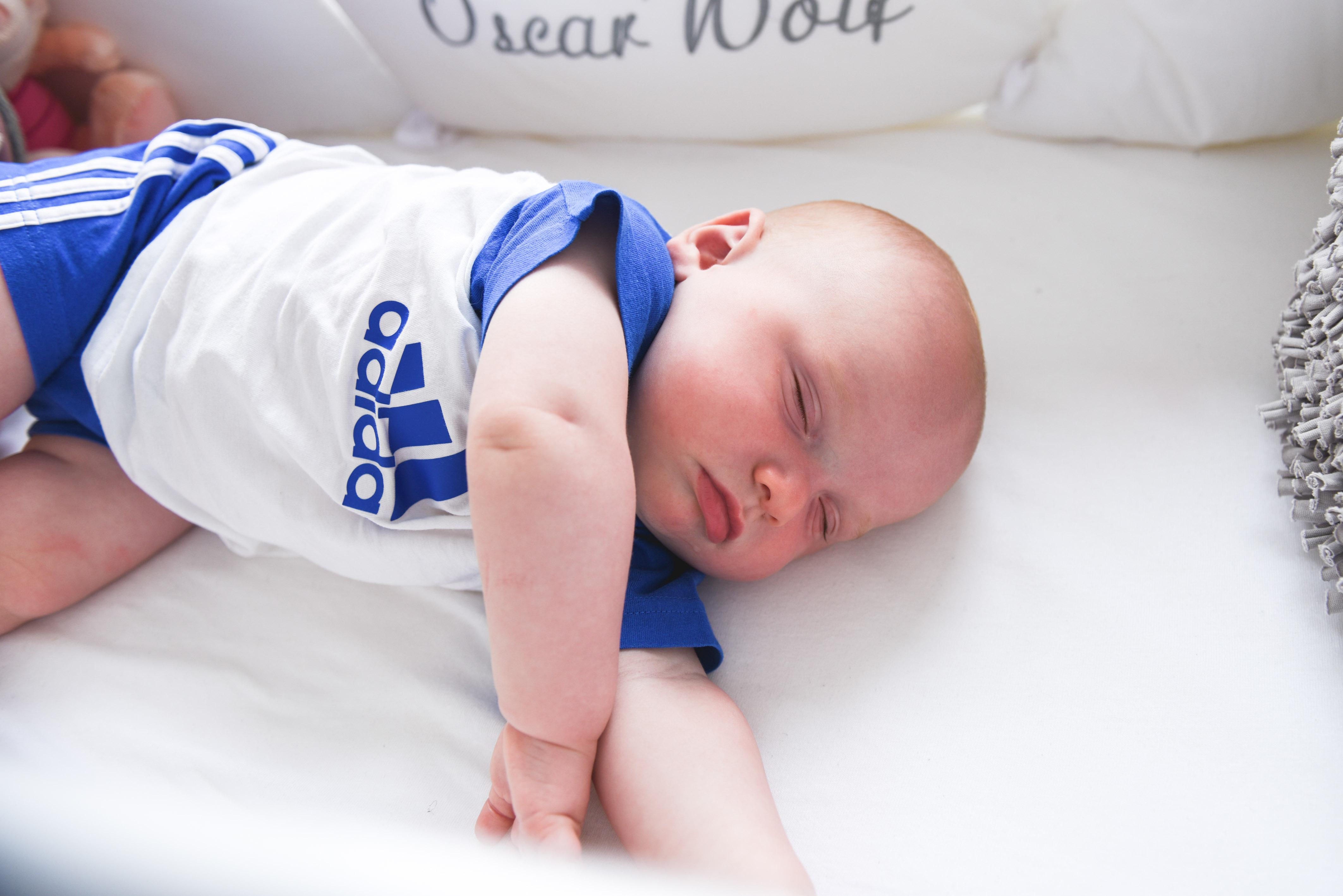 She continued: “It was just so unexpected. I know I’d had these symptoms but at first the doctors just thought it was cystitis and they kept giving me antibiotics.

“I found out because when I went for a sexual health screening, they saw something was wrong with my cervix and they sent me for a colposcopy straight away.

“My relationship with Oakley was quite new at the time. We’d only been together for a couple of months so the diagnosis was quite heavy information to be given. It was quite a numb feeling.

“I found out I was pregnant when I went for laser treatment on my cervix. Luckily they did a urine test before the treatment started.

“When they said I was pregnant I was absolutely ecstatic. I can’t even tell you how happy I was because I’d only just recently been told that I’d never be able to have my own children." 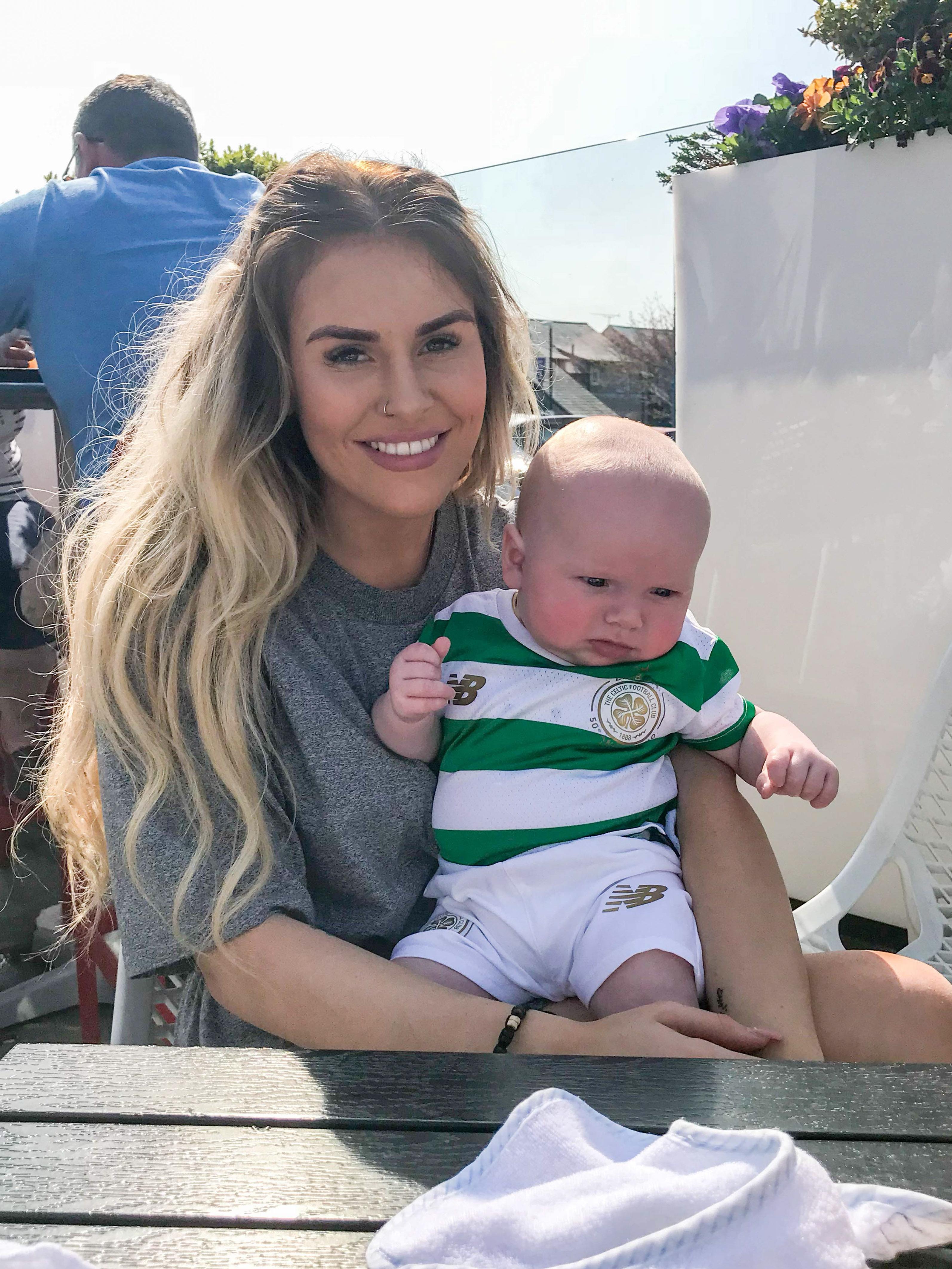 She said: “There were options to freeze my eggs and stuff like that but I never would have been able to carry my own child so when I found out that I was pregnant I absolutely had to keep him.

“I spoke to the doctors and I explained that unless it was going to kill me, if I had the opportunity, then I was going to have this baby.

“They said if I chose to keep the baby that they would support me and they would do all of my treatment after.

“The hospital actually wanted to start my chemotherapy treatment at 35 weeks and I said ‘no’ because it’s poison. I wasn’t going to put poison in my body when there is a little baby in there.

“When Oscar was born it was literally magical – like a miracle.

“And in the seven months since I’ve raised a seriously happy and healthy baby, had three rounds of chemo and still got a first. Not to blow my own trumpet but I am proud.”

When she started to experience heavy bleeding, a sore stomach and lower back pain after intercourse, Abbie knew it couldn’t be her period as she took the contraceptive pill every day. 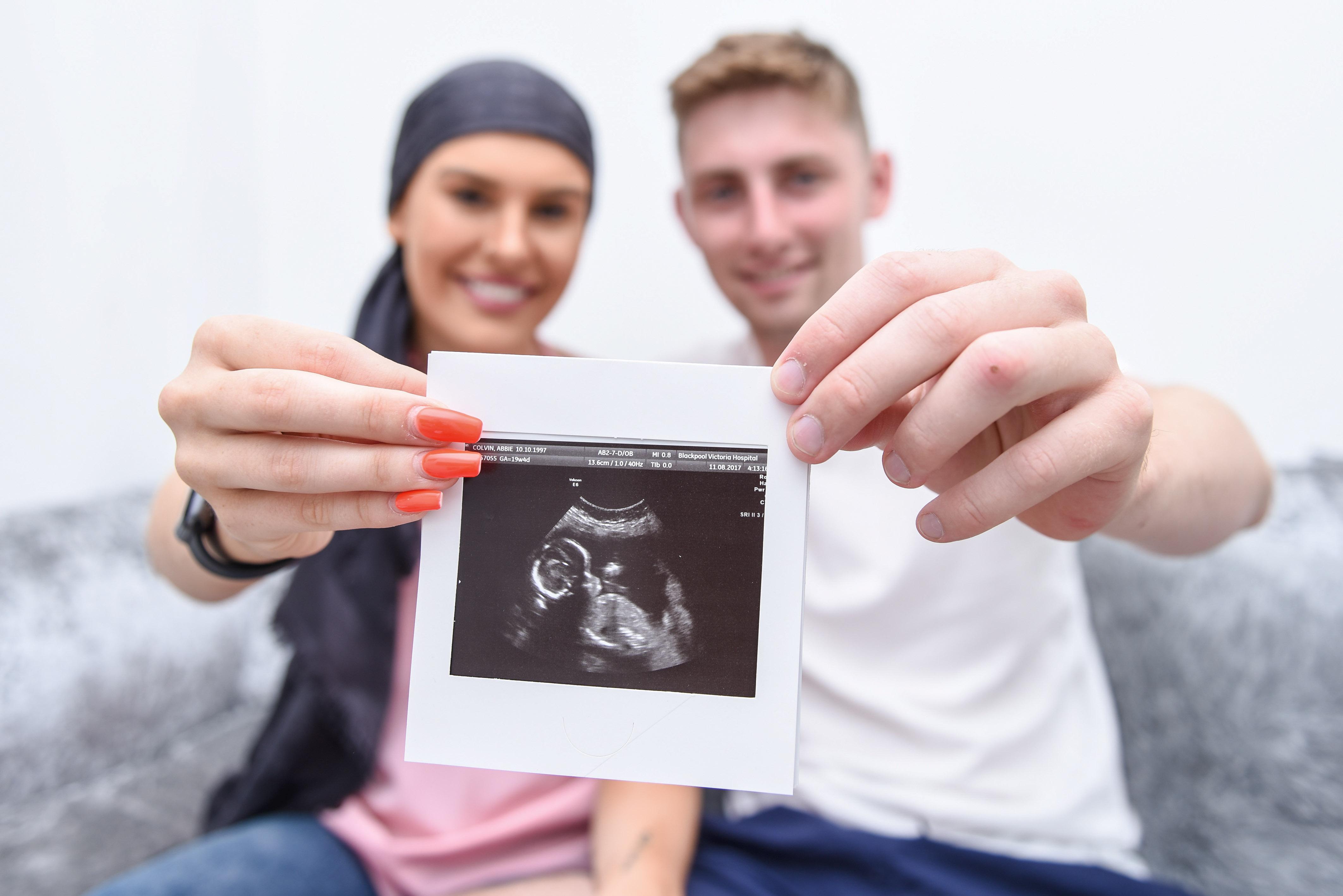 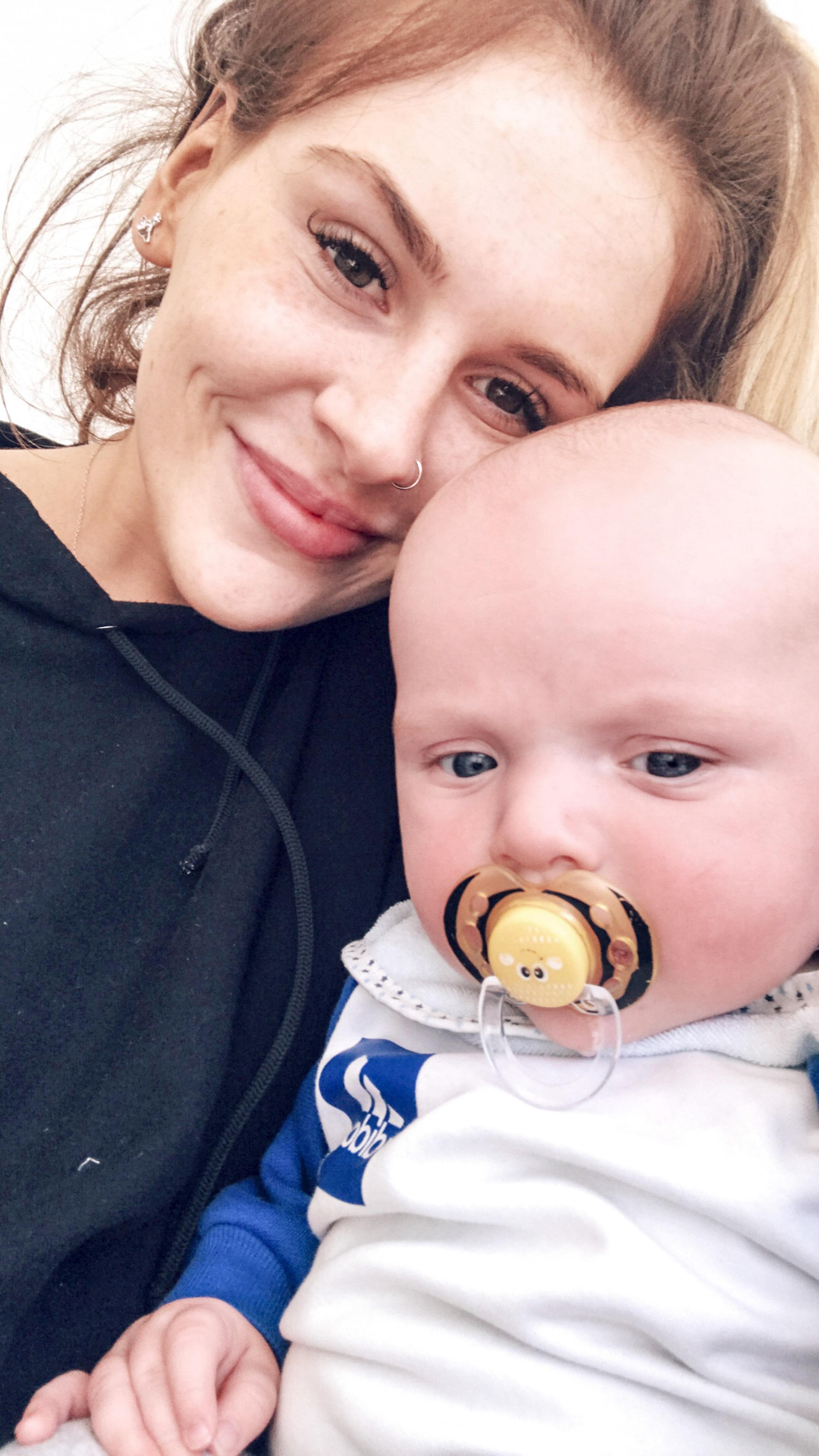 The student went to the doctor and was given antibiotics for cystitis – a common type of urinary tract infection that causes inflammation of the bladder.

But a trip to her local sexual health clinic in September 2016 revealed abnormalities on Abbie’s cervix and the student was sent for a diagnostic procedure called a colposcopy.

Despite their relationship being so new, Abbie and delivery driver Oakley have taken the devastating diagnosis and a surprise pregnancy in their stride.

When Abbie decided not to have chemotherapy during her pregnancy, Oakley worried for his girlfriend’s safety but came around when he realised it could be their only chance to have a baby.

Cervical cancer is defined as when the disease starts in the neck of the womb, otherwise known as the cervix, according to Cancer Research UK.

Generally, it's caused by persistent infections with the human papillomavirus (HPV), which is contracted through sex.

As noted on NHS Direct, there are no obvious symptoms during the early stages of cervical cancer.

However, vaginal bleeding can often be a tell-tale sign – especially if it occurs after sex, in between periods or after the menopause.

That said, abnormal bleeding is not a definite sign of the condition – just a possible indicator.

Nevertheless, it should be investigated by your GP as soon as possible.

Cervical screenings, or smear tests, are a preventative swab used to detect abnormal cells on the cervix – the entrance to the womb from the vagina.

Every woman over the age of 25 who has a GP is invited for screening – and it doesn’t matter if you’re sexually active or not.

It is possible for women of all ages to develop cervical cancer, but it’s extremely rare in women under 25.

Fortunately, the condition is almost completely preventable and can be forecast with regular smear tests.

The type of treatment depends on the stage and severity of each case, but there are several ways to treat cervical cancer.

Often, it's possible to have surgery without undergoing a hysterectomy  (the removal of the womb) although this is a rather routine procedure.

Alternatively, radiotherapy is a common option for those with early stages of the disease.

The brave mum was induced at 37 weeks so she could start cancer treatment as soon as possible.

While her university offered Abbie 52 weeks off, she refused to let the pressures of being a first-time mum fighting cancer get in her way.

Abbie continued attending lectures and completed all her assignments and exams to achieve a first.

Determined to pursue her dreams of becoming a doctor, Abbie has now transferred onto a seven-year course which includes a PHD in medicine.

Abbie’s treatment so far has involved chemotherapy but if her next scans aren’t clear, the mum will undergo a hysterectomy tomorrow. 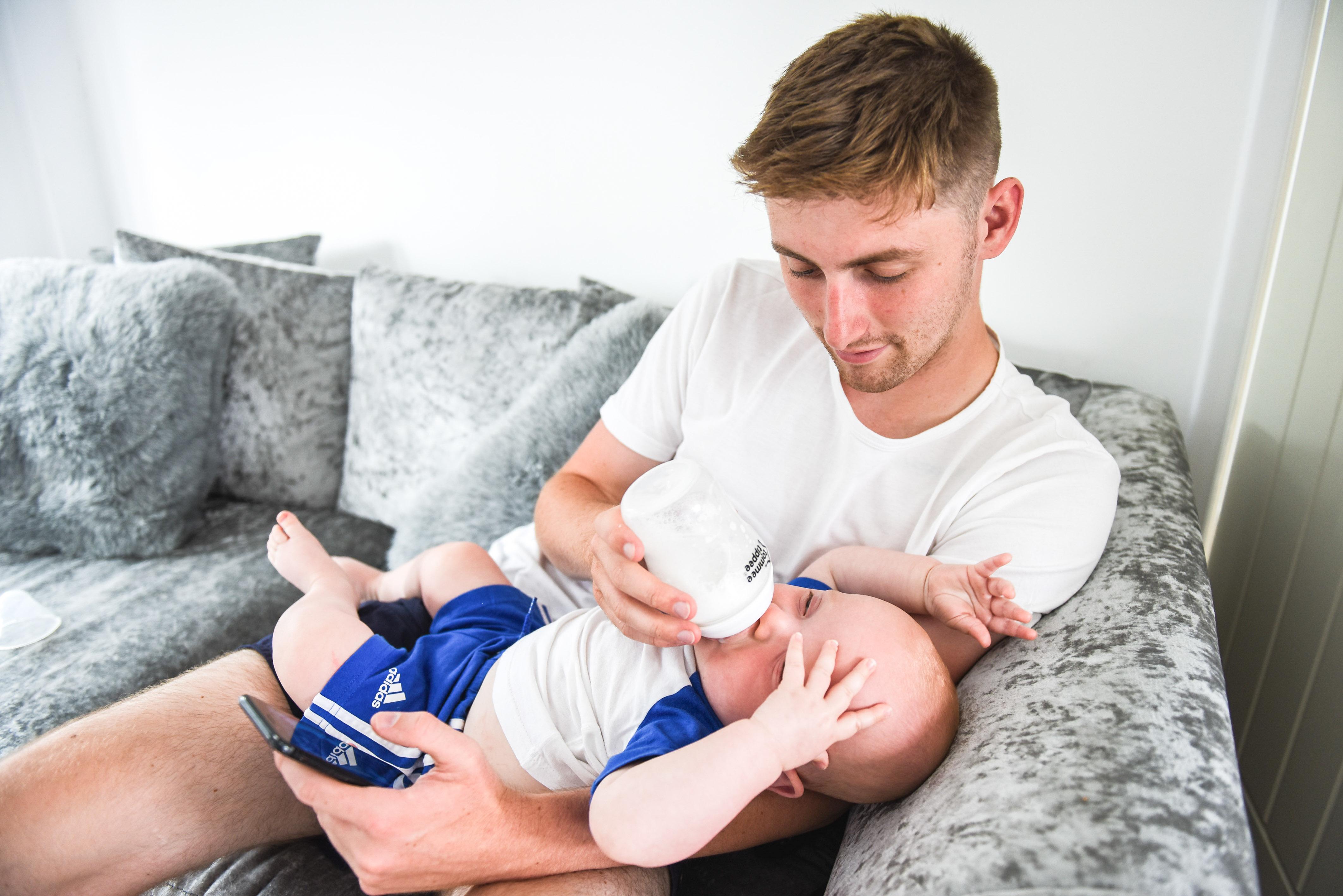 Abbie said: “Oakley was focused on getting me better but when he understood more about the situation he realised that this would probably be the only chance we would ever get to have a family.

“It was scary because we hadn’t been together for long and all of a sudden we were pregnant.

“It was like a miracle because I was on the contraceptive pill and I took my pill every single day and never missed it.

“It was like I was meant to have Oscar. He came at just the right time – exactly when I needed him.

“The hospital have been really good and kept on top of scans and doing blood tests.

“After the first two rounds of chemotherapy I started bleeding again really heavily every day and they sent me for a scan straight away.

“I got told that the cancer had come back vigorously so I didn’t have much time to wait for the treatment – it was spreading." 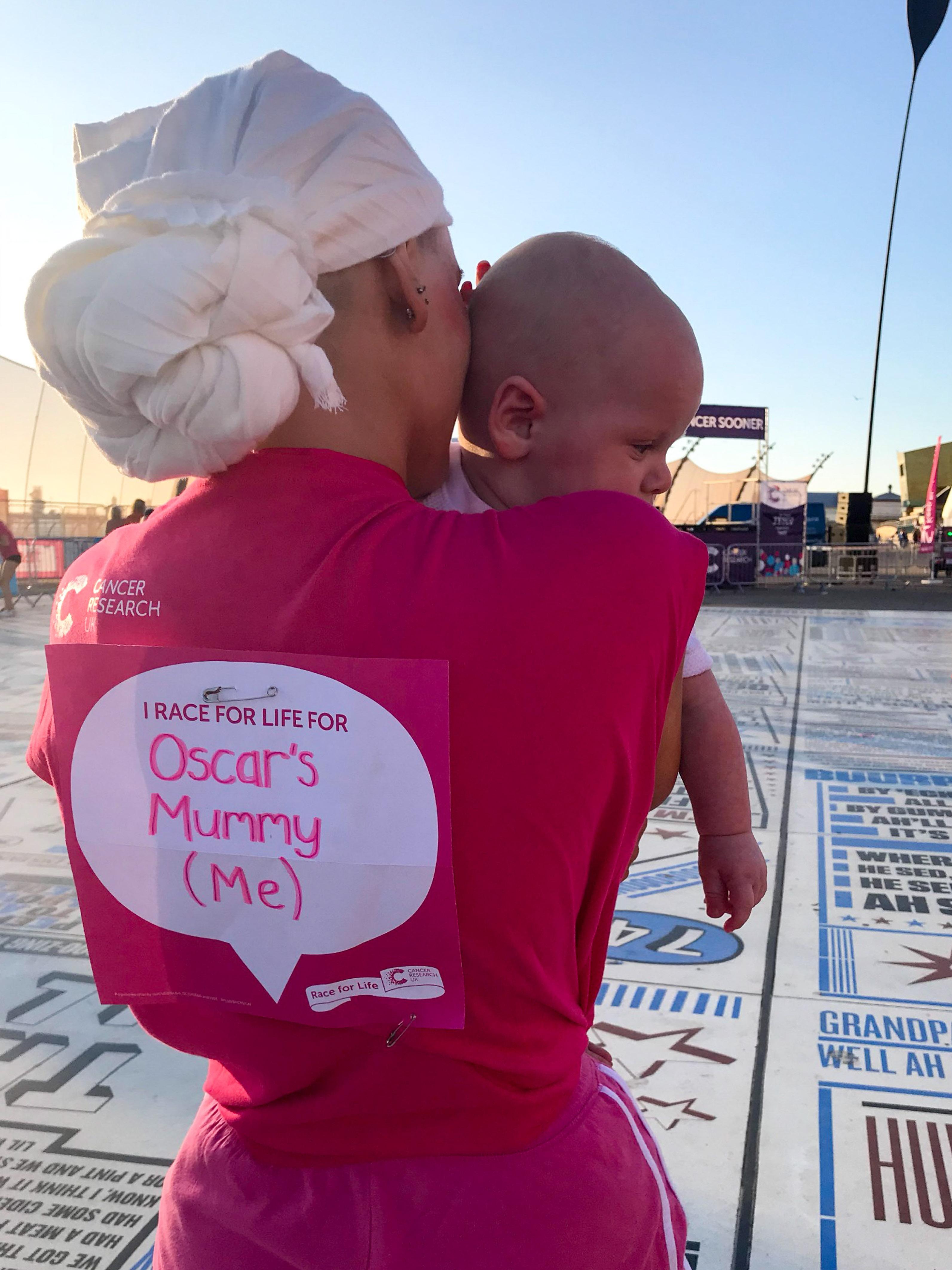 “I didn’t lose my hair the first time around but this time I have – I’ve got no hair.

“I’m booked in to have a hysterectomy provisionally. If my next scan doesn’t come back clear I will have the surgery.

“If I’m not able to have any more children I don’t mind because I have Oscar – I’ve got my baby.

“I have just carried on with my life. I carried on going to university. I just wanted everything to stay as normal as possible.

“I’m sick all the time, no matter what I eat. Most of the time I’m sick but I just get on with my day.

“Battling cancer at such a young age has made me open to anything. There is no point in sitting there worrying about things that are so insignificant and silly things like washing up or little arguments.

“I have changed as a person 100 per cent. I’m so much more open to doing things, I’m happy to go out and do stuff and enjoy life.

“I appreciate every day that I wake up. A positive mental attitude helps me through my treatment and to stay so strong for Oscar.” 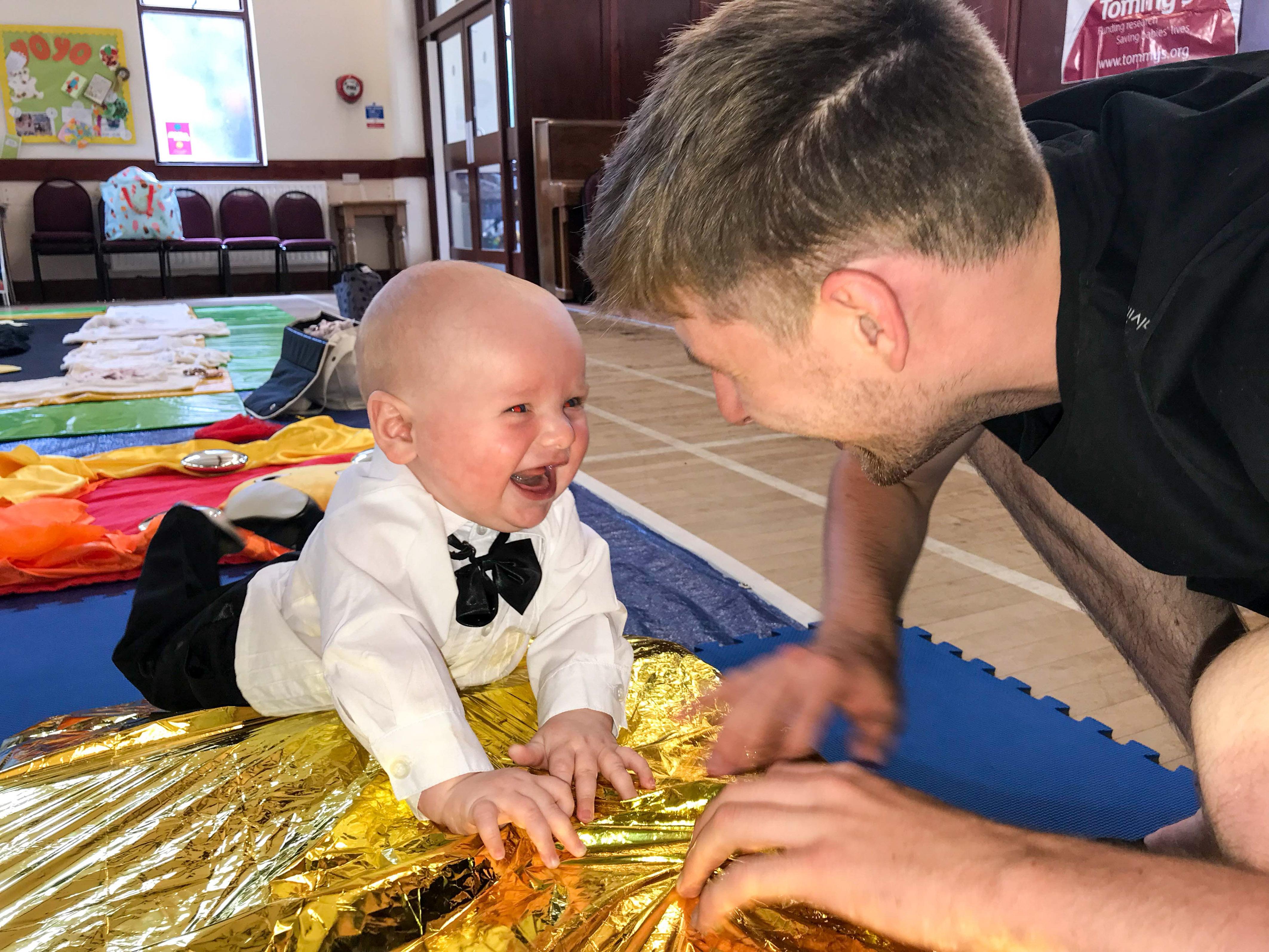 After being blessed with such an amazing baby boy through this difficult time, Abbie says she is more motivated than ever.

She wants other young women who are battling cervical cancer to never give up and to always keep a positive mental attitude.

Even though smear tests for under 25 year olds aren’t available, Abbie said that if you think something is wrong with your body to ‘stick at it’ and keep pushing for a diagnosis.

Abbie said: “For other women battling cervical cancer, you can never give up. You know your own body and you need to keep pushing for a diagnosis.

“If you know something isn’t right, you need to stick at it because they actually refuse to give women under 25 a smear test.

“It’s really nice to be able to share my story and get it out there for other women, especially people who are too young for a smear.

“It’s scary. If I hadn’t kept going to the doctors and gone for sexual health screening, I still wouldn’t know I had cancer. That one test saved my life.

“Women need to know that even if they’re not eligible for a smear test, there are other ways of getting a diagnosis.”

Worried about having a smear test? Here's everything you need to know about the procedure – from what happens to how it will make you feel.

Earlier this year we told how experts warned women are snubbing life-saving smear tests over fears their vaginas aren’t "normal".

Mum-of-one Kate Tonner, 38, ignored reminders to get tested and was diagnosed with incurable cervical cancer which spread to her back and stomach.