Meghan Markle's style: The making of a duchess

Fashionably speaking, how do you make a duchess? Even before her engagement to Prince Harry, Meghan Markle had already begun her gradual transformation from Hollywood starlet to royal bride. The strappy or strapless tops and dresses, as well as the odd flash of midriff, often seen on her social media accounts, were replaced by crisp white shirts and an overall more "polished" appearance, down to her hair and make-up. The torn jeans seem to have been replaced in public with more tailored pants and longer, pencil skirts. 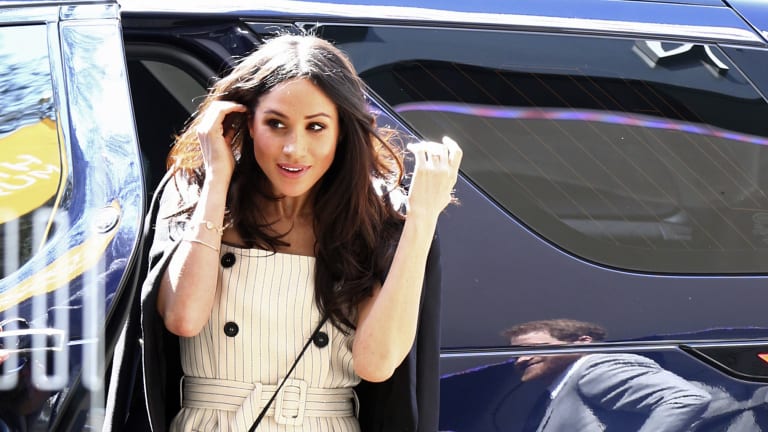 Meghan Markle stepped out in a Camilla and Marc blazer and Oroton bag in London.

Her biggest trademarks have included wrap-around belted coats, including the cream one worn for the couple's engagement announcement, and her signature "messy bun" hairdo, which has also become more stylised. While the former Suits star has ired traditionalists for some of her fashion choices – exposed shoulders and pants to evening events are two examples – many agree Meghan is bringing a brand of style to the Royal Family that will help extend its appeal to the Millennial generation.

Given royal dress protocols, Meghan has quickly incorporated several British-based designers in her wardrobe, including Emilia Wickstead, a Duchess of Cambridge favourite, and hats by Philip Treacy. Such is the level of interest in Meghan's style that Instagram accounts have been devoted to her every outfit since she and Prince Harry confirmed their relationship in late 2016.

And let's not forget the "Meghan effect" – the power she (like Kate Middleton) has to drive sales of the clothes she wears. Even Australian brands have benefited from Meghan's style choices, most recently Oroton, which may help it paddle its way out of troubled waters. Meghan has also sported a Camilla and Marc blazer and pieces by Natalie Marie Jewellery, a small business from Sydney's northern beaches.

Still, the pinnacle of the Meghan effect will be her choice of wedding gown and its influence on bridal trends. Given Kate's Alexander McQueen lace gown helped fuel a resurgence in long-sleeved wedding dresses, there's little doubt Meghan's will spark endless imitations.

The life of the party: North Shore businessman Graeme Rutherford remembered after dying in tragic accident