The former model, 47, and President Donald Trump welcomed French President Emmanuel Macron and his wife Brigitte to the White House for a three-day visit. 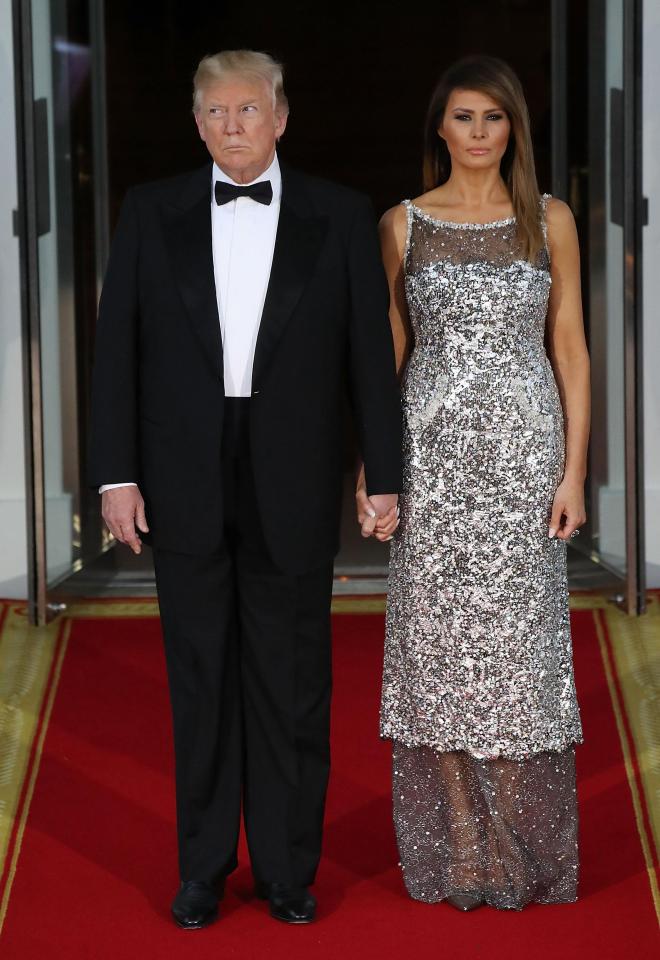 Melania stole the limelight – despite the awkward Trump-Macron hand-holding and dandruff dusting – with impeccable fashion choices and an exquisite banquet.

Melania reportedly spent weeks educating herself about the protocol and history of special White House occasions ahead of last night's state dinner – the first the Trumps have held.

Every minor detail was overseen by the First Lady, who, unlike some of her predecessors, chose not to hire an event planner or recruit outside help. She solely set the tone, aesthetic and vibe of the grand evening.

Melania, who has a wealth of experience entertaining the New York elite, chose a gold and cream colour scheme, with details spanning the patterns on the chair cushions to the honey with pudding made by bees in the White House hive. 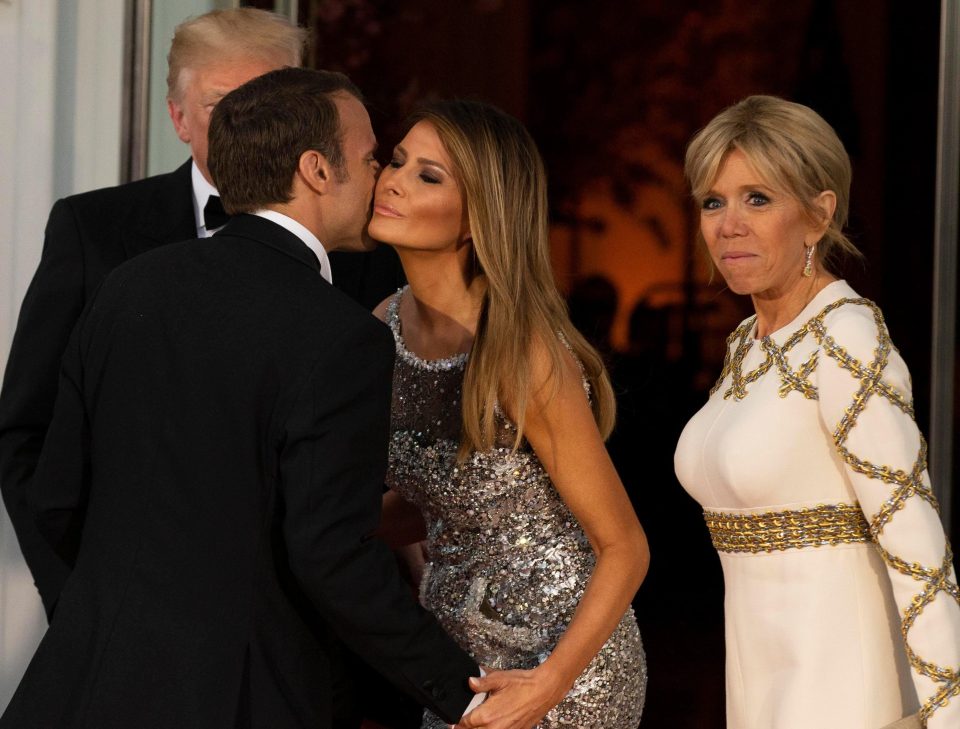 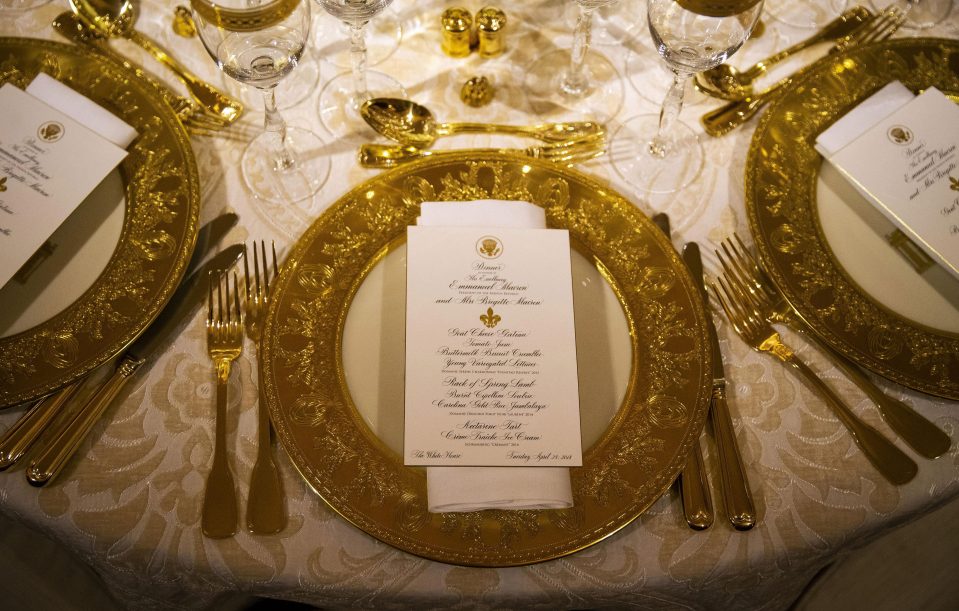 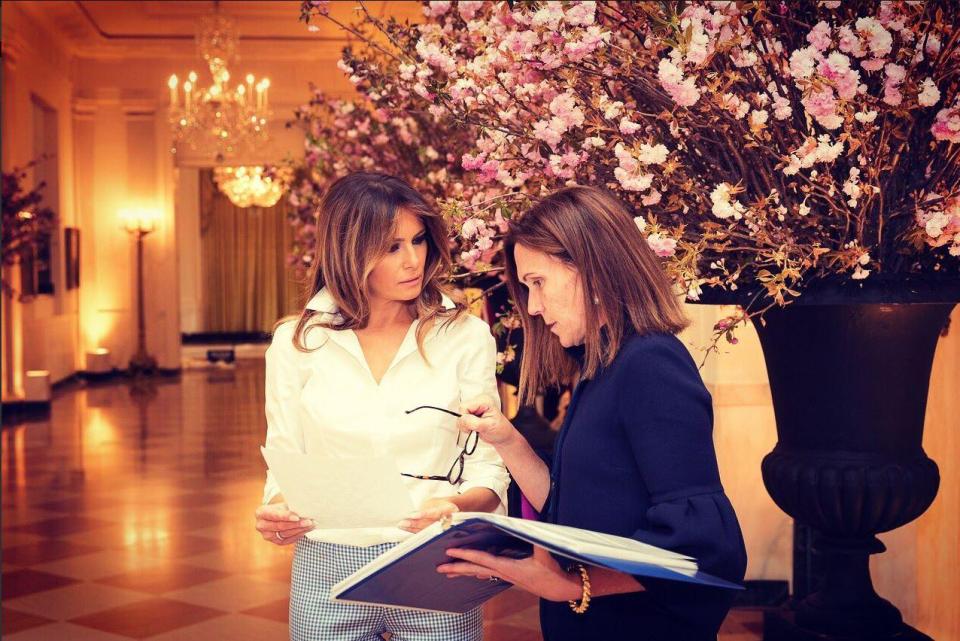 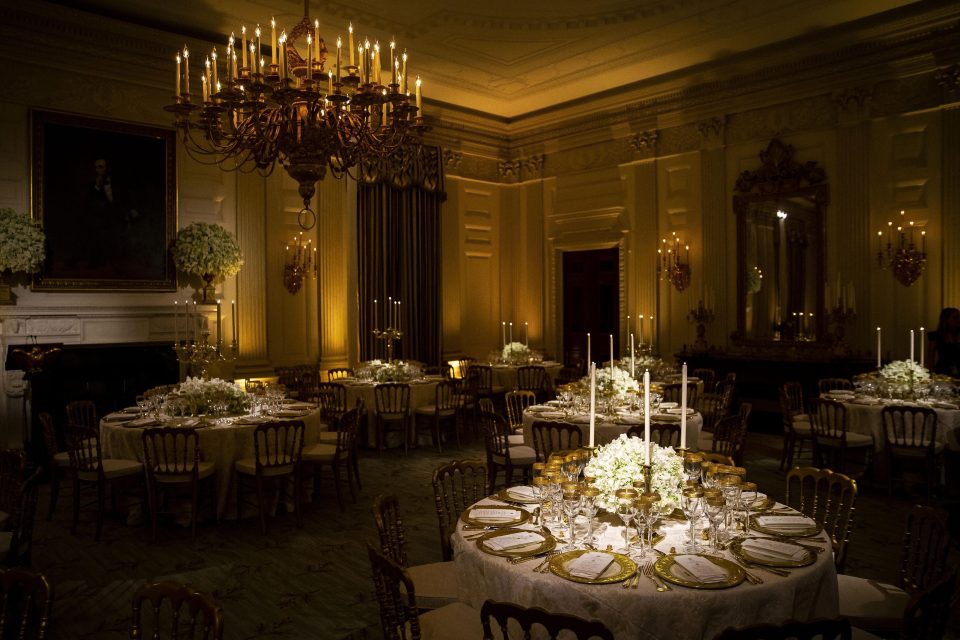 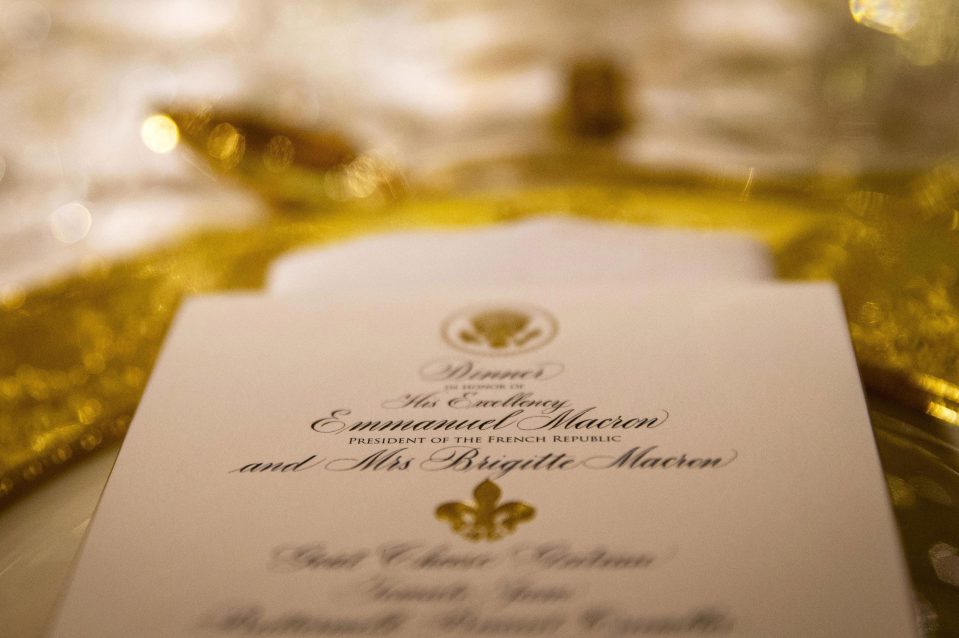 Each aspect of the dinner was chosen due to the meaning behind it, including china from the Clinton presidential era and the menu, which featured a rack of lamb with accompanying Cajun-spiced jambalaya, with herbs from the White House Kitchen Garden.

Melania inspected all of the decorations, including the white lilac centrepieces, 1,200 branches of cherry blossom and dripless candles.

Grand decorations aside, Melania ensured all eyes were on her by paying homage to France in a striking Chanel Haute Couture sequin-adorned evening gown, hand-painted with silver and embroidered with crystals and sequins.

The dress may seem extravagant but, for a state occasion, pieces can be donated and then gifted to the National Archives. 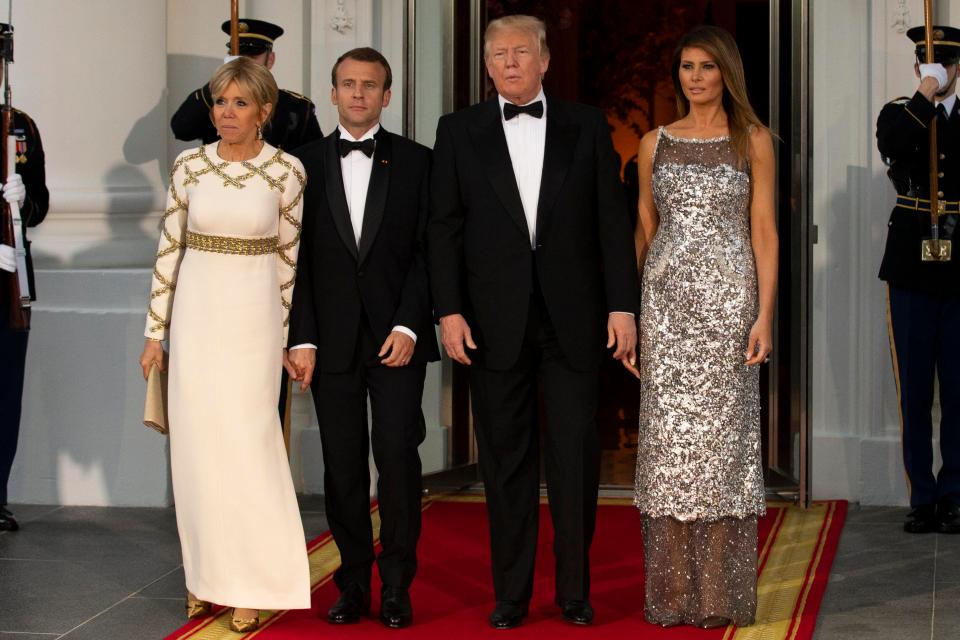 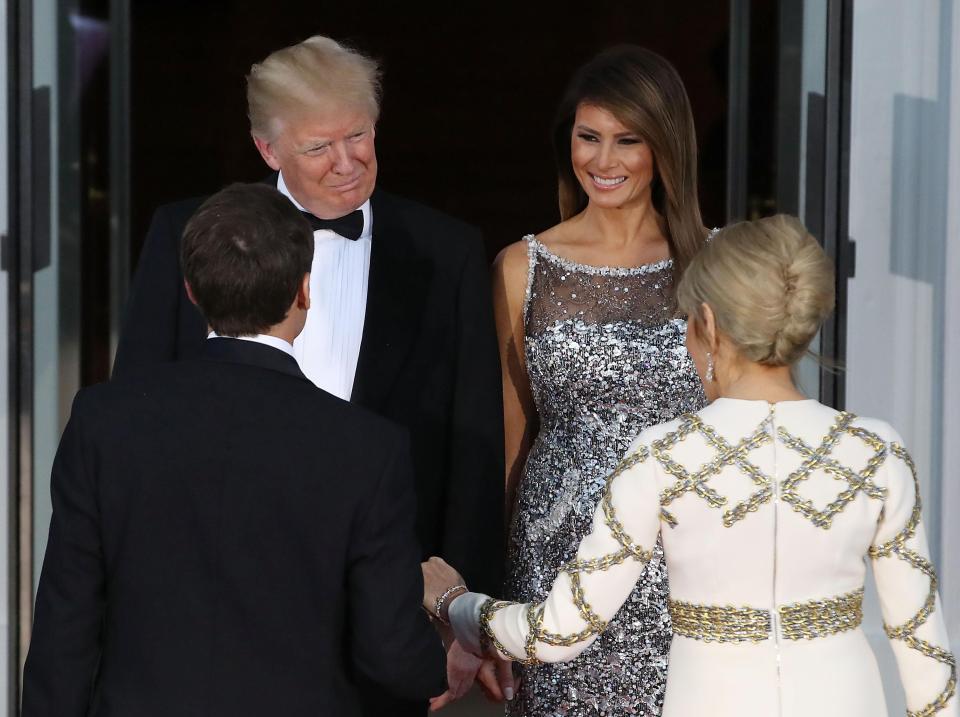 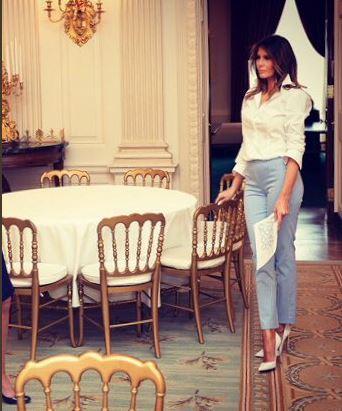 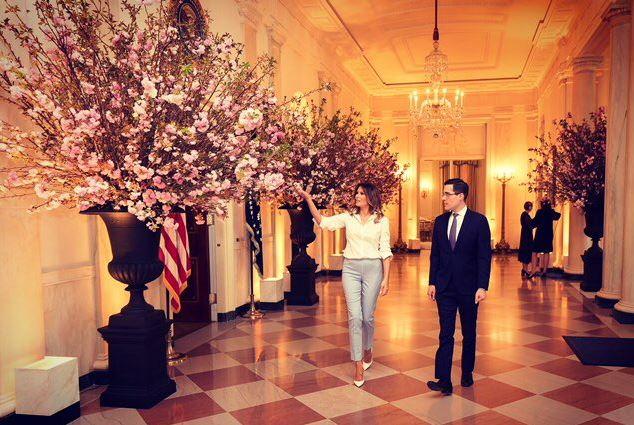 The President acknowledged Melania's efforts in his toast. He said: "To America's absolutely incredible First Lady, thank you for making this an evening we will always cherish and remember. Thank you, Melania."

All details, as per the office of First Lady, was meant to "complement and pay homage to the long-standing friendship between the United States and France".

On Monday, at the start of the state visit, the Trumps and Macrons participated in a tree-planting ceremony in the South Lawn.

Melania looked elegant for the occasion in an all-black £1,997 Givenchy outfit, complete with a dramatic cape. 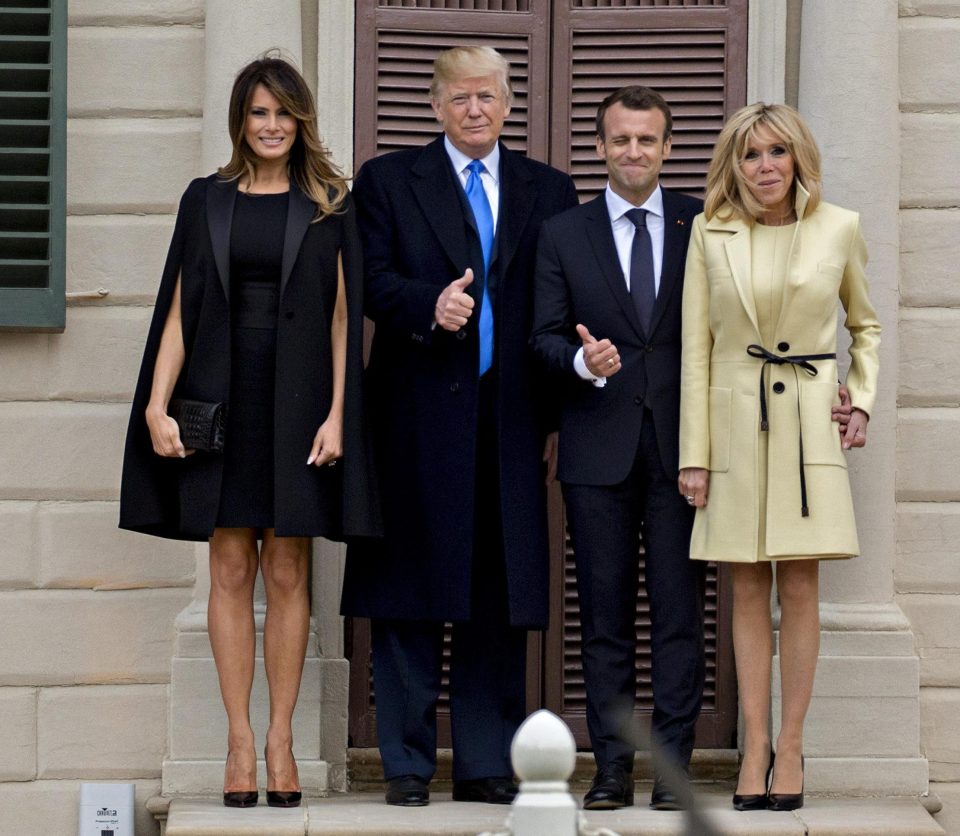 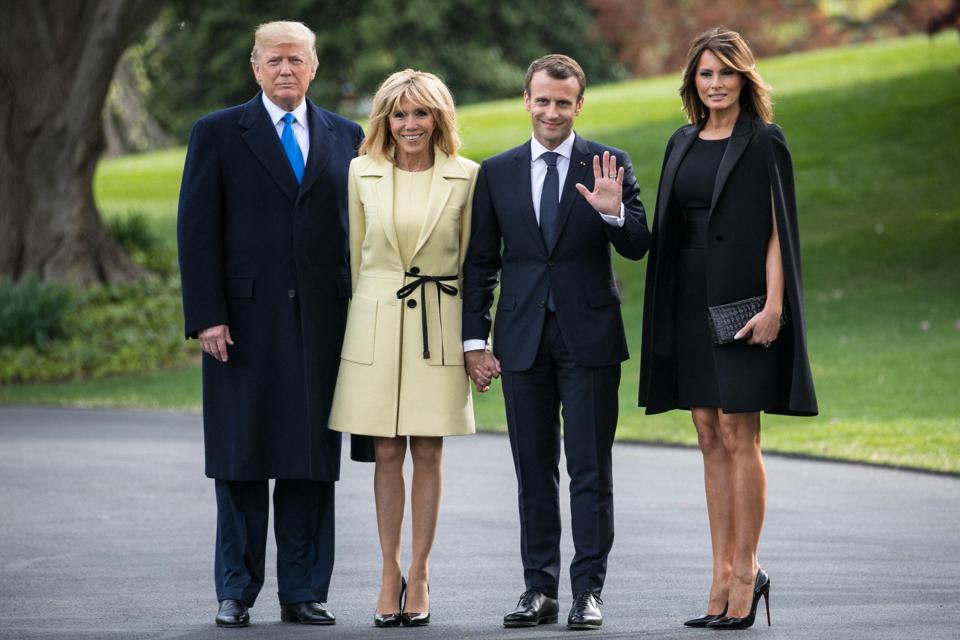 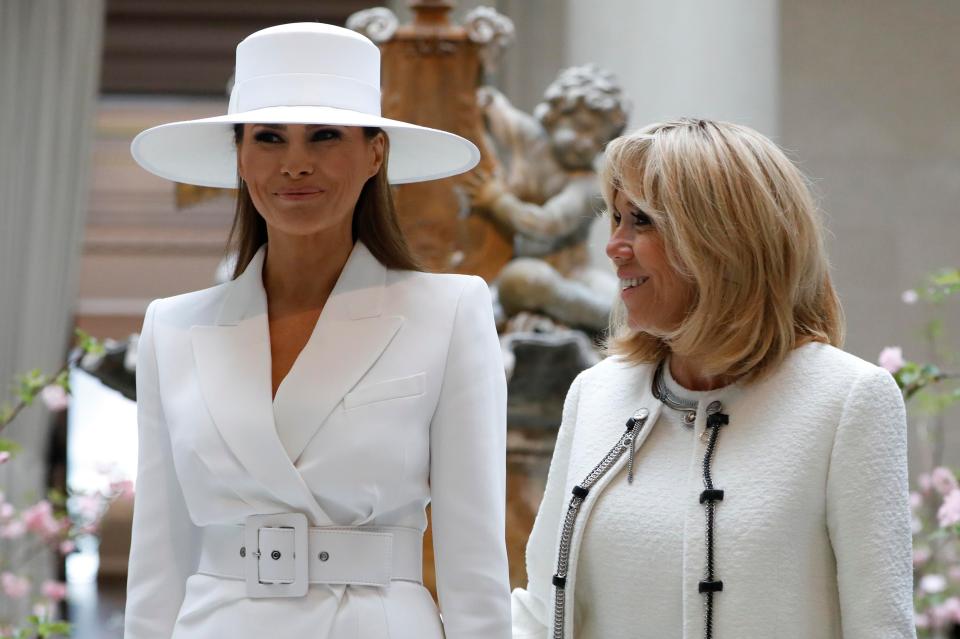 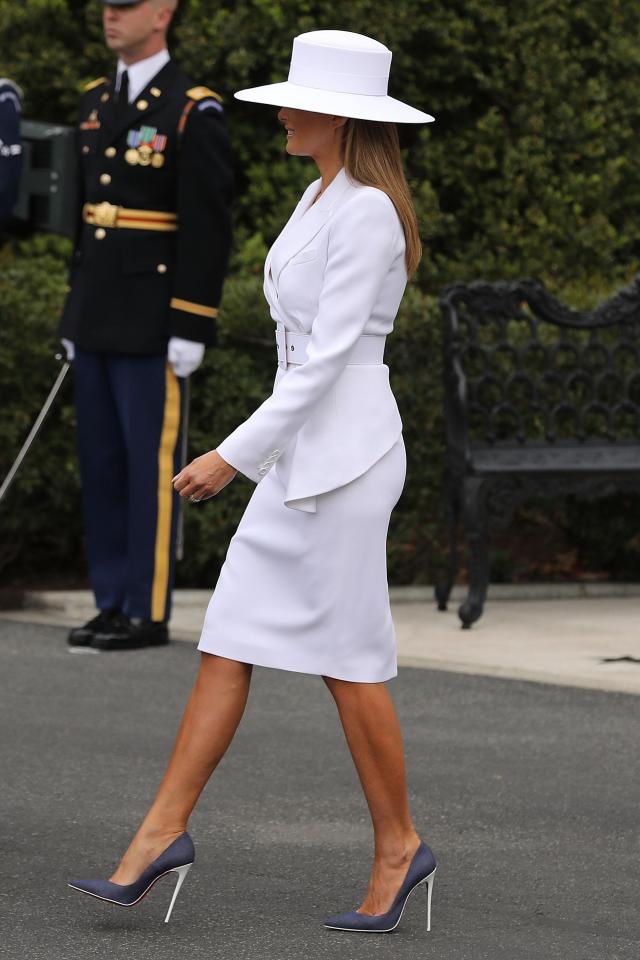 For the second day of the visit, Melania worked Parisian chic as she coordinated with French First Lady Brigitte in a flawless all-white look.

But it was Melania’s enormous custom-made Herve Pierre hat that stole the show. It spoke volumes: this was her house, her dinner, her terms.

Many took to Twitter commenting on its likeliness to Beyonce’s famous Formation hat, while others joked:  “Melania's hat for President". 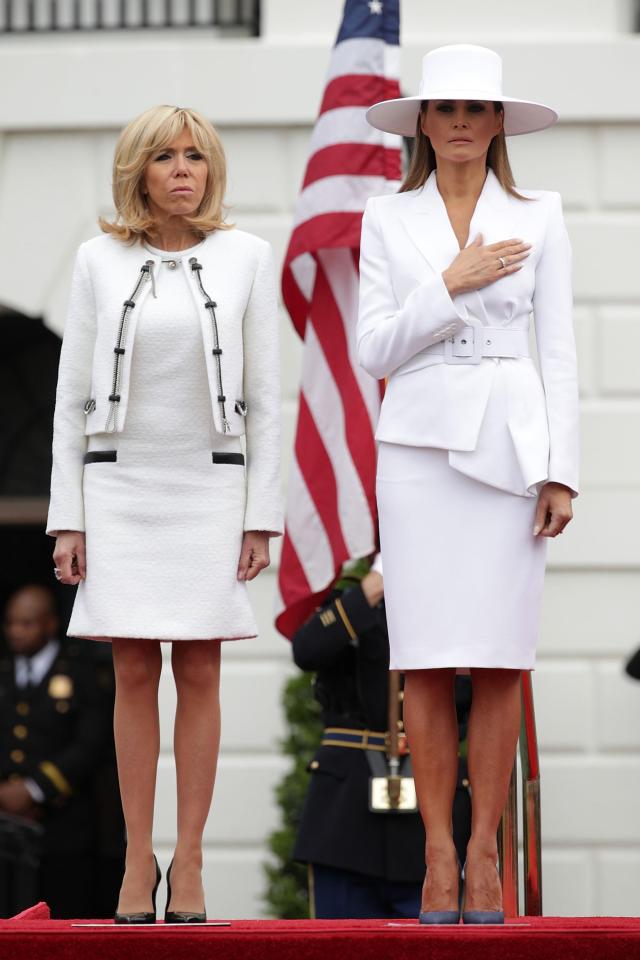 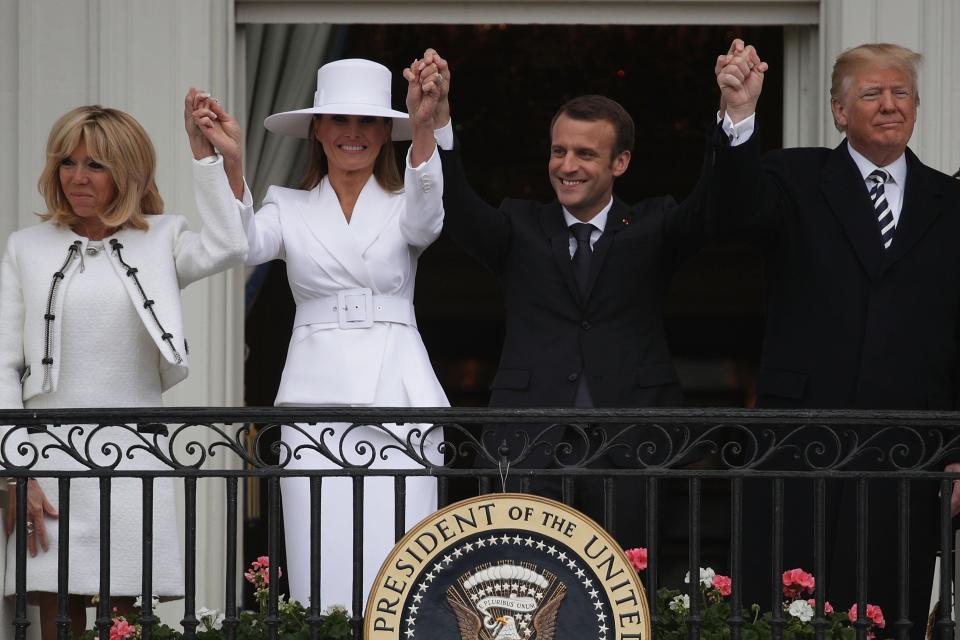 To thank them for their visit, the Trumps presented the Macrons with a framed section of upholstery from one of the chairs in the White House Blue Room.

Featuring a golden eagle surrounded by laurels, the chair was part of the furniture suite inspired by Pierre-Antoine Bellangé, who designed royal palaces in France.

The Trumps will also give the Macrons a photo album upon their departure with pictures of their visit, as well as a Tiffany & Co. silver bowl engraved with the presidential seal and their signatures.

Meanwhile, this is the awkward moment Melania wriggles her fingers away as Trump tries to hold her hand during a photocall.