She thought she was being real slick.

Loiba Maria, a New York City resident who asked that her last name not be revealed, was on the subway in Manhattan when she noticed an “absolutely gorgeous” man sitting across from her.

Loiba told HuffPost that she decided to discreetly take photos of the head-turner, but claimed that her intentions weren’t purely to save a little eye candy for a rainy day.

“I didn’t know who he was at that time but he somehow looked familiar,” Loiba told HuffPost, so she took numerous photos to help her “look him up later.” 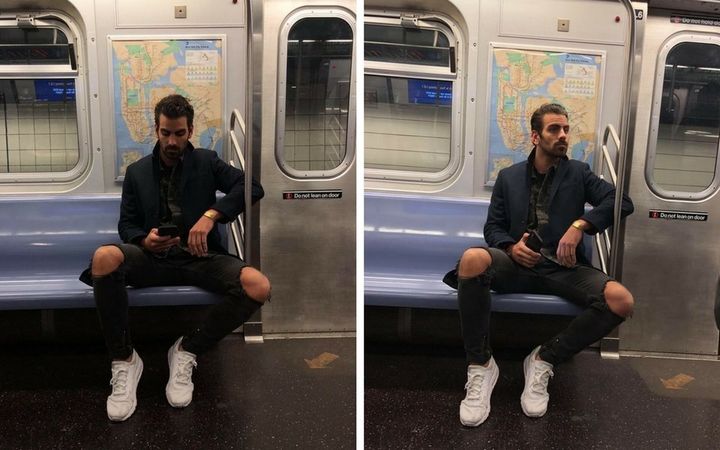 Loiba told BuzzFeed that over the weekend she just happened upon an article in her Facebook feed that featured the very same man she’d seen a week earlier. It turns out he is Nyle DiMarco, a deaf model and activist who won Cycle 22 of “America’s Next Top Model” in 2015 and Season 22 of “Dancing With the Stars” in 2016.

That’s when Loiba decided to fess up to her crime ― for the sake of verification, of course.

“I think I saw you on the E train last Sunday,” she commented in a video posted to DiMarco’s Facebook fan page. “If this is you, you are very handsome in person!”

Not only did DiMarco respond to her comment but he also posted a sneaky surprise of his own.

“Yes i knew you were taking pics of me. Thank you love!” the model wrote, posting a photo that he’d taken of Loiba — with a huge grin on her face — snapping pictures of him on the train.

DiMarco explained that being deaf actually helped him zero in on what Loiba was doing right away.

“I have ‘deaf eyes’ so they’re very ALERT and I immediately spotted her camera towards me,” DiMarco told HuffPost. “Then I thought of Cole Sprouse always doing the same to people not discreetly taking pictures so I decided to pull a Cole Sprouse move!”

DiMarco thought their interaction on Facebook was so funny that he tweeted about it this past Saturday. That post quickly went viral.

Although DiMarco is clearly delighted that the sneaky photo sessions came to light, he told HuffPost that he has just one regret about the entire experience:

“I love this story so much and wish we had the chance to take a selfie!” he said.