A MORTIFIED woman has revealed how she ended up in A&E after accidentally getting a sex toy stuck – and her story is excruciatingly detailed.

Posting about her experience on Facebook, Samantha Palenske joked that her story was a long emotional rollercoaster of a tale which she'd only ever shared with close friends before. 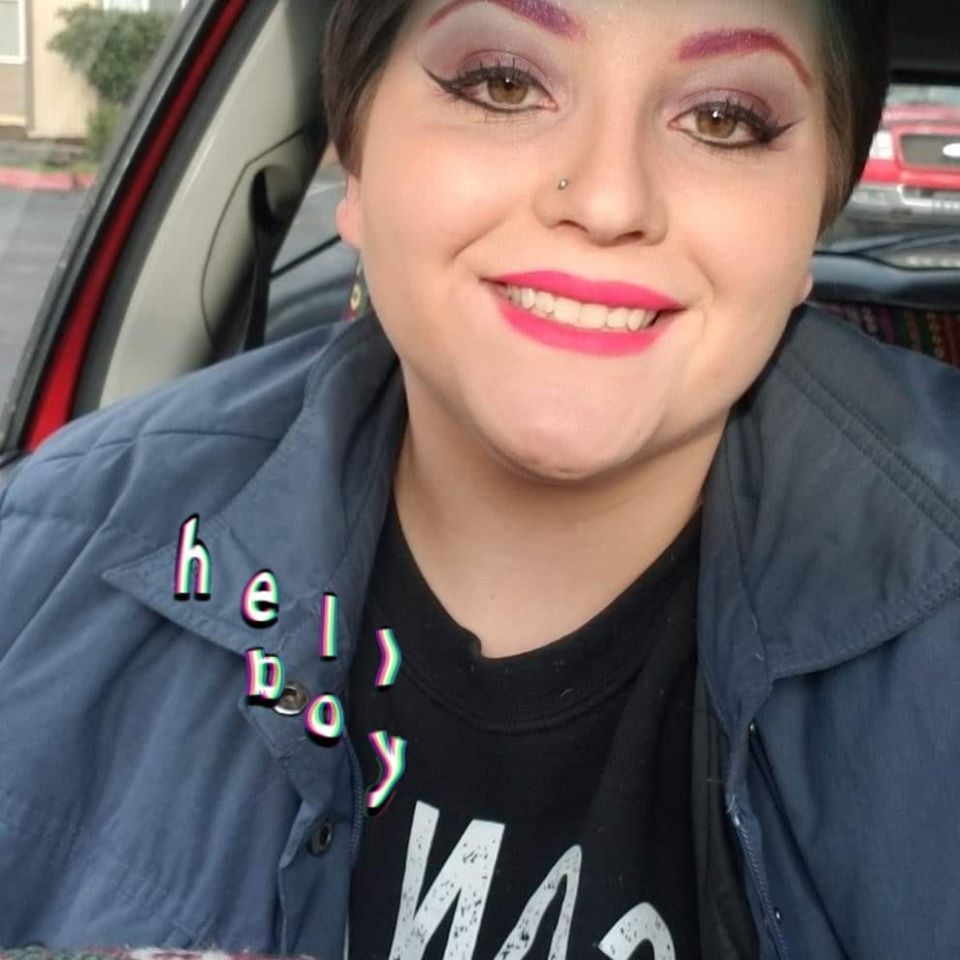 But considering how we could all do with some light relief amid the coronavirus lockdown, Samantha decided she'd share her experience on the internet to lift our spirits – and it certainly did the job.

The singleton, from Washington, recalled how she was seeing a guy – nicknamed "Beardy" – shortly after moving out of her parents' home.

While they were, erm, "getting intimate" on evening, Samantha described how she was "feeling herself" and decided to use a butt plug she'd bought for just $1 on Wish.

She said: "It's got a rhinestone, seemed small and innocent enough. WRONG." 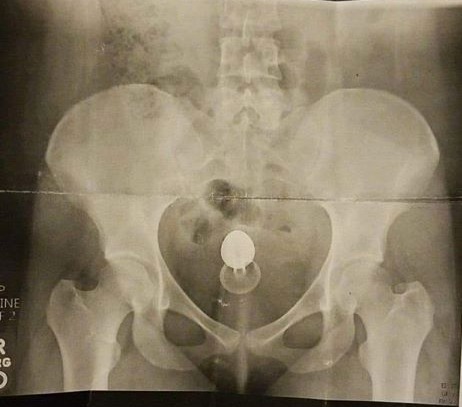 Although it was "smooth sailing" at first, Samantha says Beardy then began "wiggling it around and tugging on it."

Despite the fact that Samantha said it was fine as it was, Beardy insisted he knew what he was doing… that is, until he didn't.

She wrote: "Beardy continues – and in the only appropriate fashion for the bad sitcom that is my life – goes, 'its okay, I know what I-….'

After confessing that he'd pushed the sex toy a little too far, Beardy tried to reassure Samantha that he'd had "much bigger things" stuck up there before. *shivers* 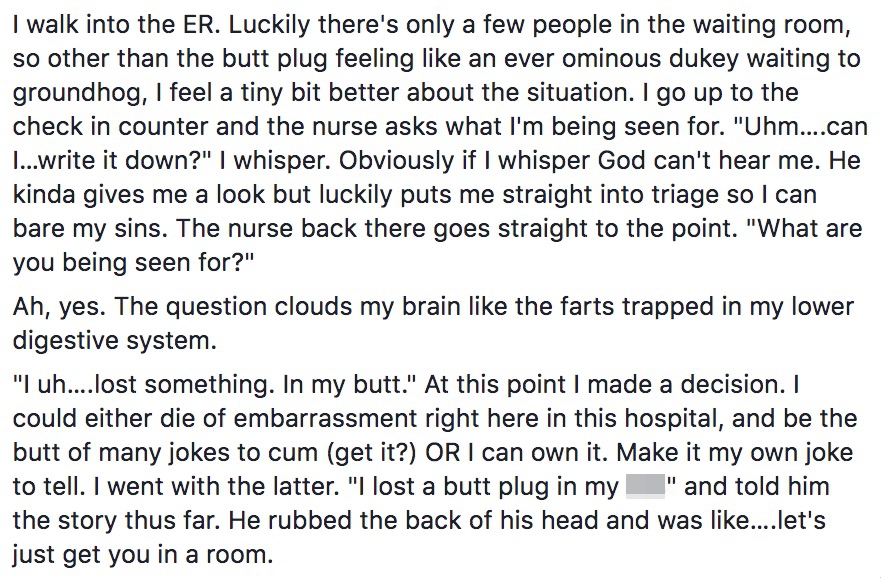 She added: "I make this fool take me to the hospital. I lived literally a block away, so he drops me off and his a** goes home, to be blocked and never getting to speak to me again."

And then the story gets even more excruciating as Samantha has to tell the nurse at the reception why she was there.

"I go up to the check in counter and the nurse asks what I'm being seen for," she wrote. "'Uhm….can I…write it down?' I whisper.

"Obviously if I whisper God can't hear me. He kinda gives me a look but luckily puts me straight into triage so I can bare my sins."

However, the singleton then decided to "own" her situation instead of "dying of embarrassment".

The doctor is 6'6 and handsome as hell. Why do these things keep happening to me? He goes "so….I heard you lost something." He's pressing around my abdomen making small talk.

Samantha was then taken into a room with a female nurse where she had an X-Ray to see how far the sex toy had travelled.

But to make matters even more cringey, Samantha recalled how the doctor who was tasked with removing the butt plug was a "SNACK".

She added: "This dude is 6'6 and handsome as hell. Why do these things keep happening to me? He goes 'so….I heard you lost something.'

"He's pressing around my abdomen making small talk. I ask him how his day was and he goes "oh you know, just a typical Wednesday." Same dude. Same. Someone please kill me."

Describing in excruciating detail just how they went about removing the sex toy, Samantha continued: "He has me get onto all fours on the bed, knees and elbows. I am fully on display.

"He puts the scope in and starts doing his thing. He's rooting around, hmming and hawing until eventually he pulls it out and tries using a finger." 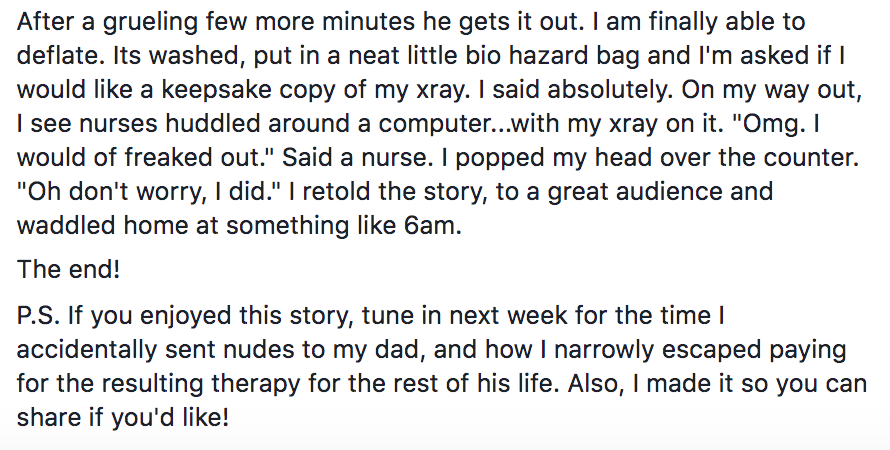 Skimming over some of the – shall we say – "gory details", the doctor ended up having to rummage around for a few minutes before he had to remove the toy with his whole hand.

"After a gruelling few more minutes he gets it out. I am finally able to deflate," Samantha wrote. "Its washed, put in a neat little bio hazard bag and I'm asked if I would like a keepsake copy of my xray. I said absolutely.

"On my way out, I see nurses huddled around a computer…with my xray on it. "Omg. I would of freaked out." Said a nurse. I popped my head over the counter. "Oh don't worry, I did." I retold the story, to a great audience and waddled home at something like 6am…"

Since sharing her horror story over the weekend, Samantha's post has racked up over 26,000 comments and even more shares.

One replied: "I think this is the best thing I have ever read!"

Another added: "This will be me one day, one Tinder date too far."

Meanwhile, a third wrote: "Moral of that story is don't use butt plugs from Wish!"

For more dating horror stories, this mortified woman accidentally left her sex toy on full display as she live streamed her haircare routine.

And this woman got the best revenge on creeps who ask to see her boobs – by sending them pics of other blokes’ bum cleavage.

Plus this woman hilariously pranks a bloke who gave her his number by pretending to sign him up to adopt a chimp.