HELEN Busby can still recall the terror she felt as she rushed to her local A&E, her lips swollen, agonisingly painful and exploding with pus.

"The amount of pus coming out was vile," she says. "I was so scared there might be permanent damage – but I was in so much pain I just needed someone to help." 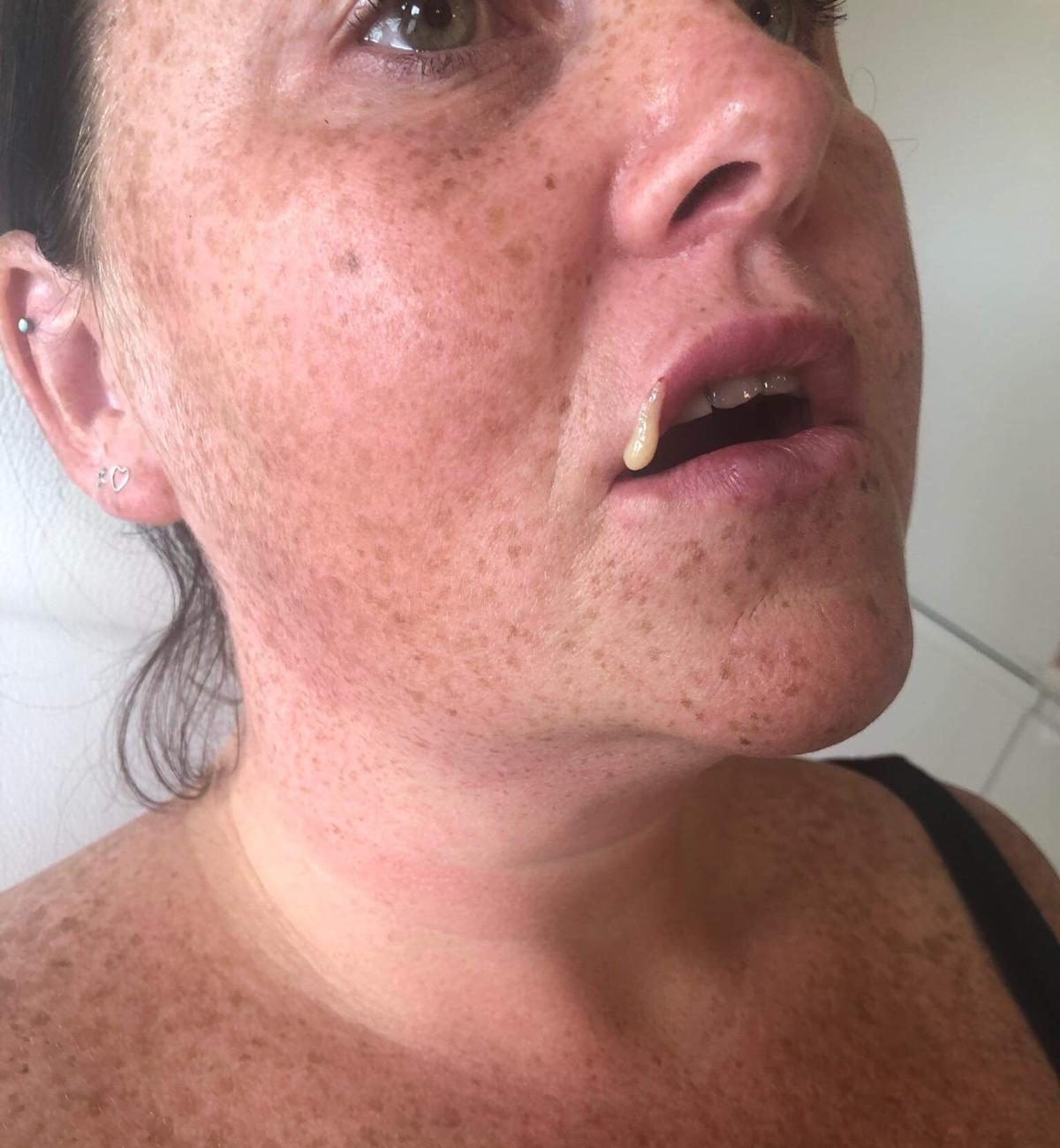 Helen, from Cardiff, had already endured several weeks of agony, her lips lopsided and covered in swollen lumps which, over time, had become infected.

Yet this was no ordinary infection – it was the result of budget lip fillers, administered by a beautician who charged her just £60 for one round of treatment.

The 37-year-old finance manager had already rung the salon in desperation asking for advice, only to be told that there was nothing they could do.

Yet she considers herself lucky. 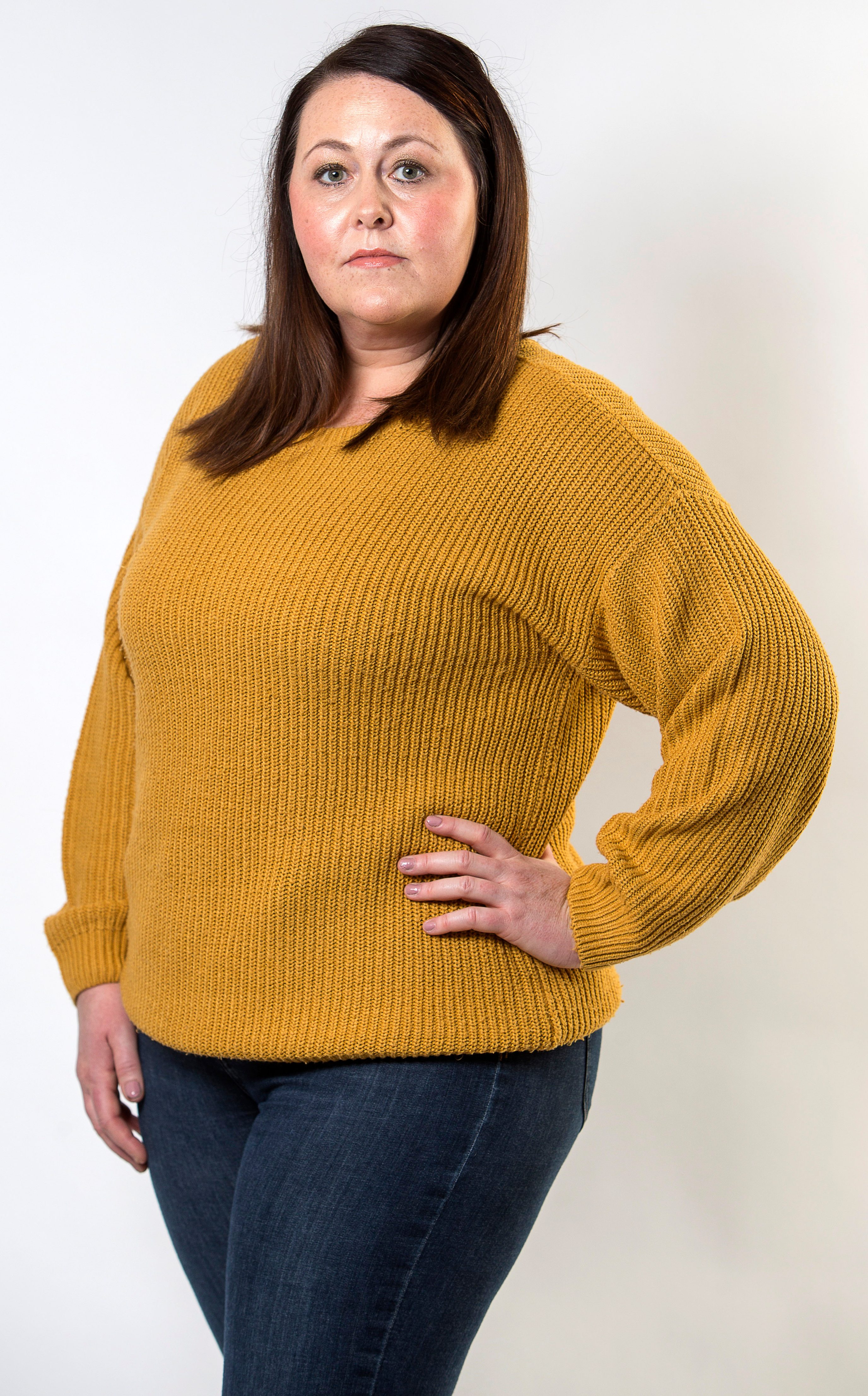 "l discovered that the girl who had administered the filler had pierced a blood vessel which can be extremely dangerous and lead to you going blind," she tells us.

"So in some ways I had a lucky escape."

It's for this reason that Helen is throwing her weight behind The Sun's Had Our Fill campaign for tighter regulation and controls on 'cowboy' beauticians administering fillers.

Had Our Fill campaign

Britain's Botox and filler addiction is fuelling a £2.75billion industry.

The wrinkle-busting and skin plumping treatments account for 9 out of 10 cosmetic procedures.

Fillers are totally unregulated and incredibly you don’t need to have ANY qualifications to buy and inject them.

83% of fillers are performed by people with no medical training, often in unsanitary environments – with devastating results.

Women have been left with rotting tissue, needing lip amputations, lumps and even blinded by botched jobs.

Despite the dangers, there is no legal age limit for dermal filler, which is why Fabulous has launched Had Our Fill, a campaign calling for:

We want anyone considering a non-surgical cosmetic treatment to be well-informed to make a safe decision.

We’ve Had Our Fill of rogue traders and sham clinics – have you?

Before getting lip fillers, the closest Helen had come to beauty treatments was dying her hair.

But her one Achilles heel was her upper lip, which she had always thought was too thin.

"I’ve never been particularly vain," she says. "I’d never liked the shape of it, I thought it was too small and I wanted it to be slightly fuller.

"I used to overline my lips all the time with a lip pencil to make up for it."

Over time, she started to think about lip fillers.

"I’d seen so many pictures on Instagram that looked great – it felt like everyone seemed to be doing it.

"I didn’t want the fake look, I just wanted a slight enhancement for my self-confidence," she says.

Through a friend, Helen heard about a girl who offered fillers and worked out of a local salon.

"My friend had had 1mg of filler in her lips and it looked fine so I just decided to go to the same place," she recalls. 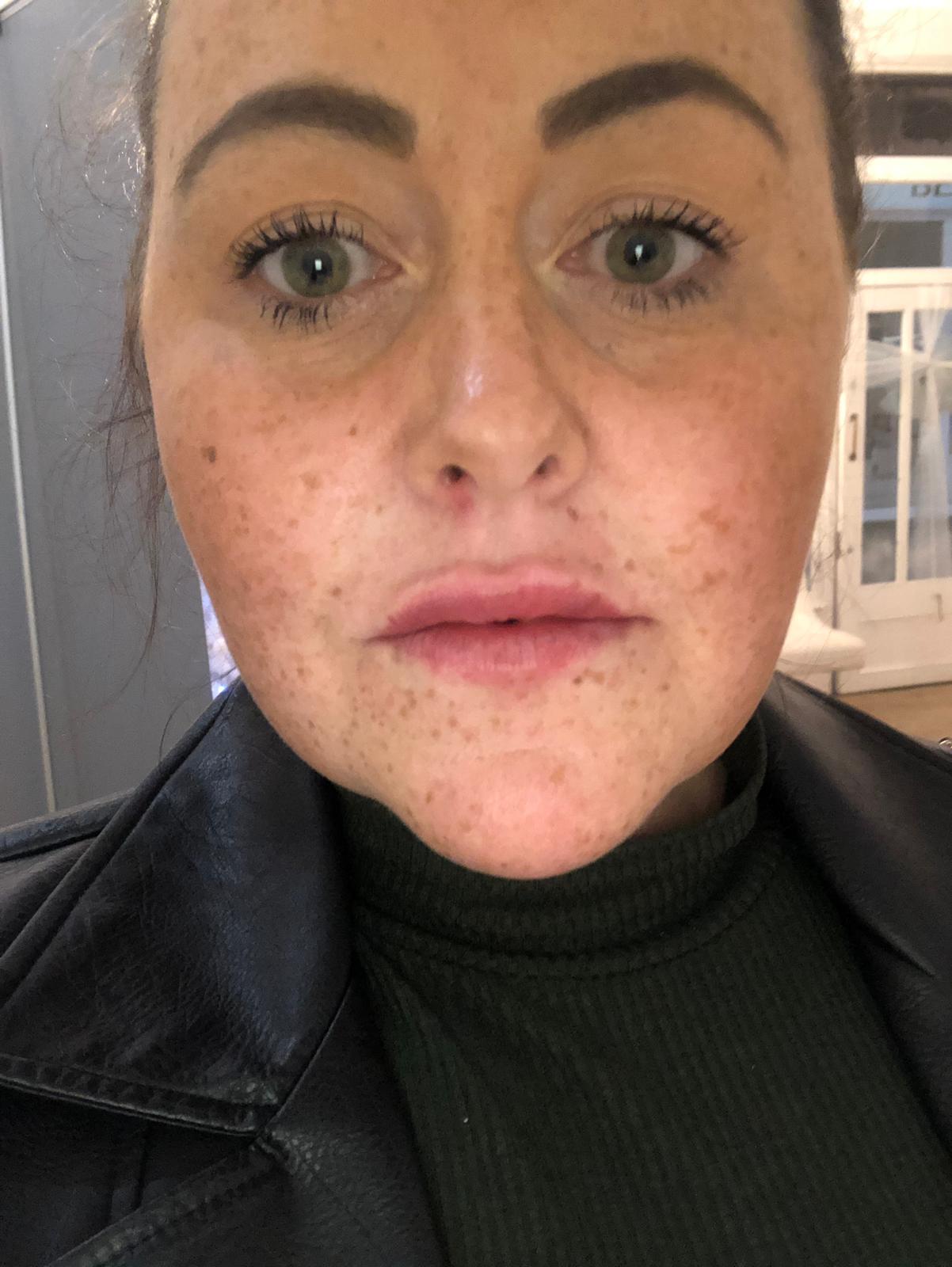 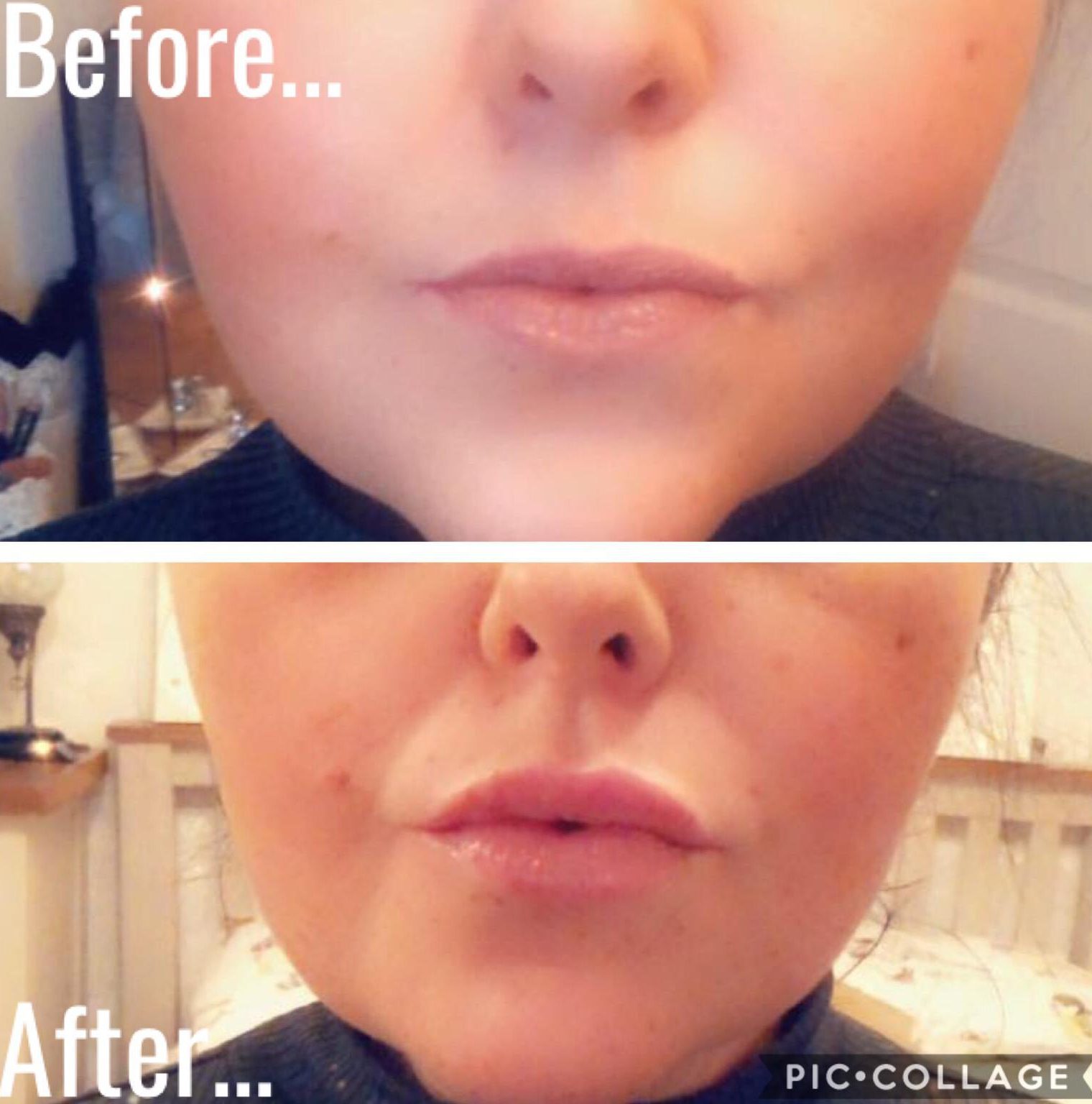 Helen made an appointment at the salon in early December.

She now concedes that there was little evidence that the girl who treated her – who was in her early thirties – had even basic beauty qualifications.

After having her lips covered with numbing cream, she had 1mg of filler administered via a number of injections.

"When the swelling had gone down after a couple of days I realised I wanted them to be a bit bigger so I went in and booked in for another 0.5mg two weeks later.

"I’ve since been told that anyone who knew what they were doing would advise leaving a bit longer between treatments – but this girl didn’t question it."

On the second occasion, the procedure was noticeably more painful.

"Some areas also felt harder than the others," Helen recalls.

By February, Helen decided to have another 0.5mg of filler injected to give her the full shapely look she yearned for – a decision assisted by the fact the salon was offering half-price fillers for just £60.

"Looking back again, alarm bells should have been ringing," she says. 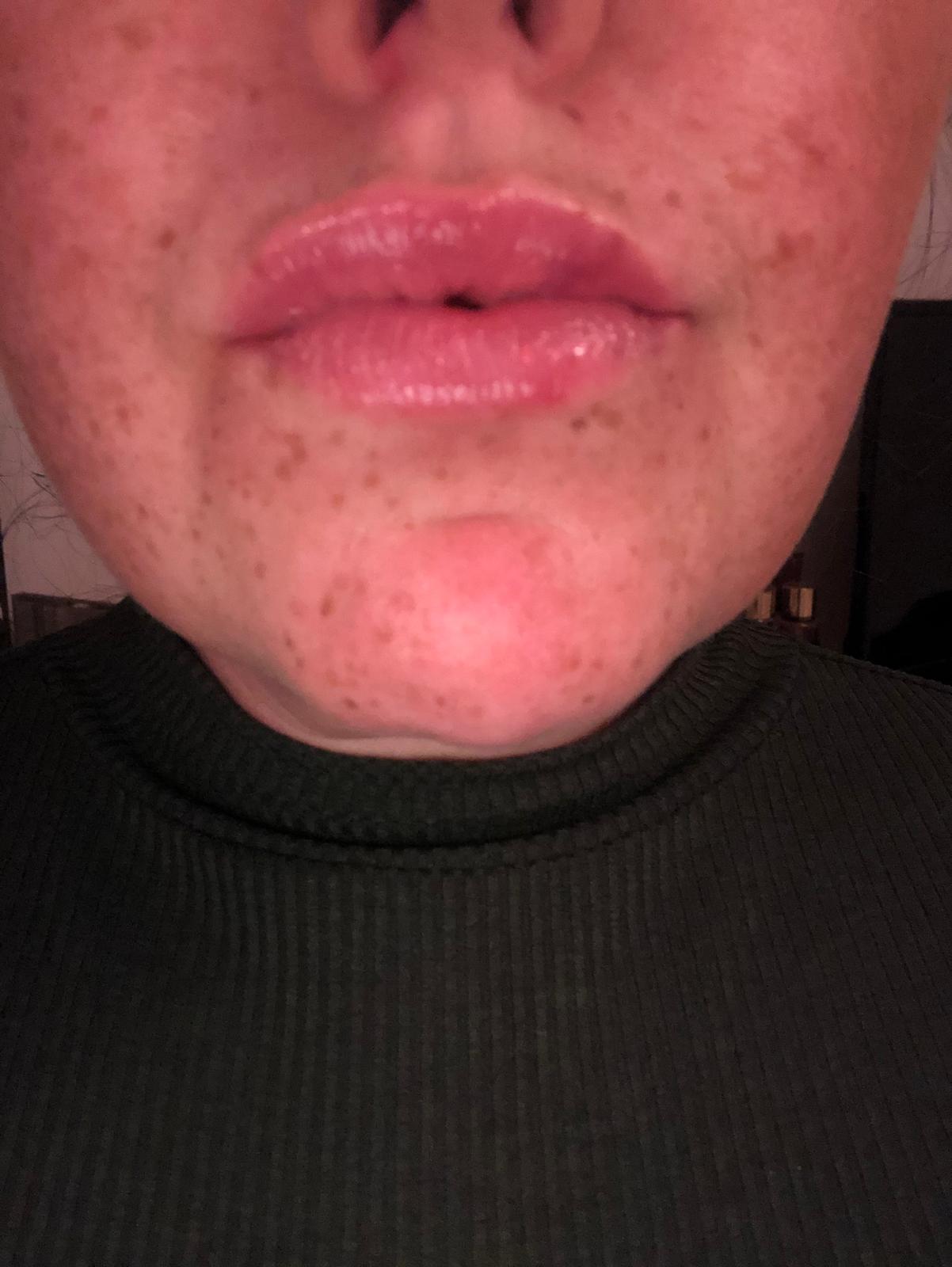 This time, the treatment was even more painful, and Helen bled from her upper lip.

"All the beautician did in response was ask if I had taken multi-vitamins," she claims.

"When I said, 'no', she replied that it was strange I had bled and I was going to bruise.

"She had nothing else to say other than advising me to sit upright in bed, not to put make-up on and to put some ice on it if it was particularly swollen."

The next day, Helen woke up with significant bruising.

"It looked like someone had got black ink and smudged it all around the lip area," she says.

"It was also really swollen – it was horrific."

She did her best to cover the area with make-up but had no choice but to go into work.

And it got worse – in the following days Helen’s lips started swelling on each side in turn.

"One side would swell, then it would go down then another bit would go up," she says. 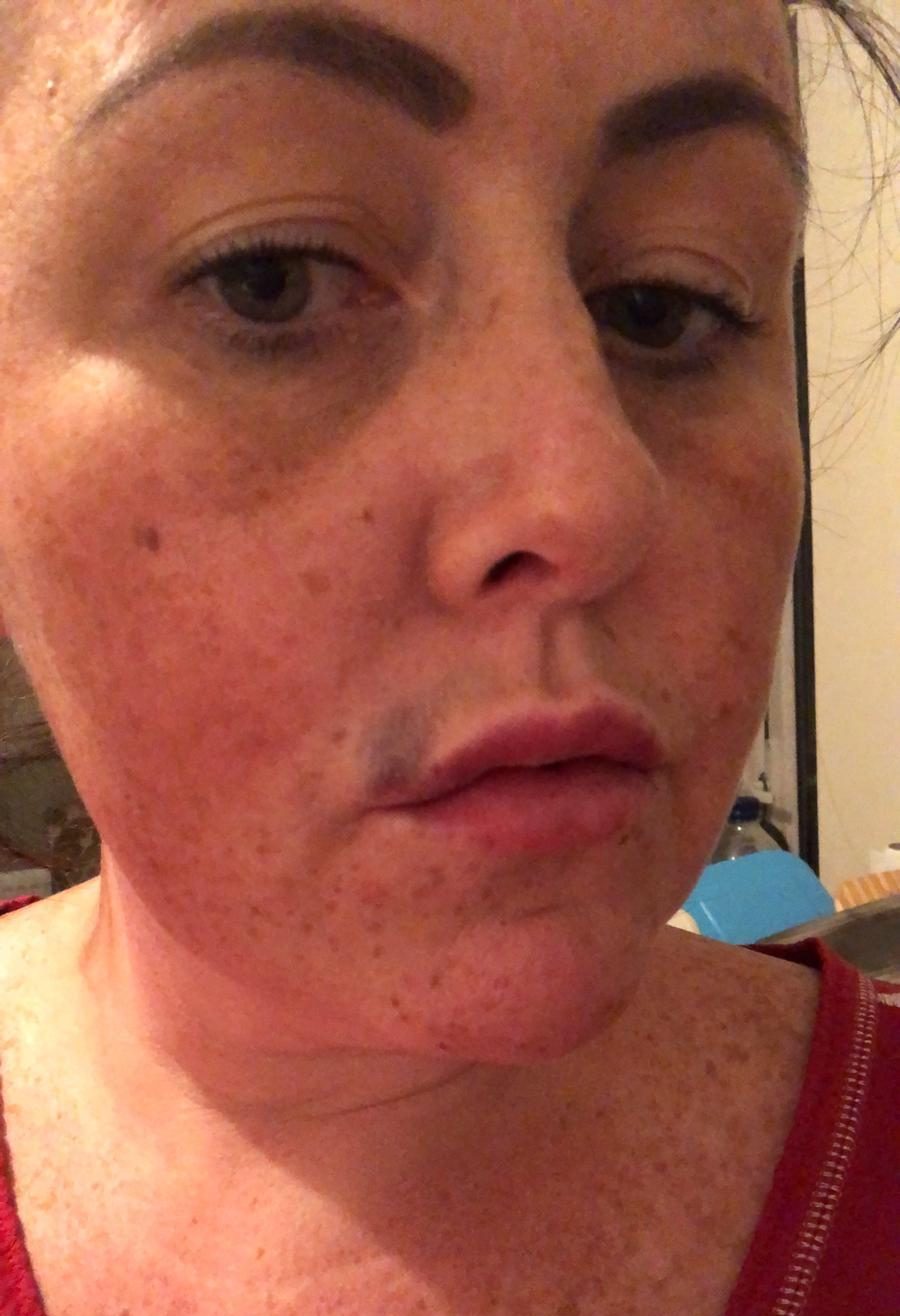 "The receptionist just said there was nothing they could do and I should go to my GP," she says. "The lack of aftercare was laughable."

Four weeks after that final treatment, one side of Helen’s lip was so big that everyone thought she had a giant cold sore.

In fact, it was an infection. "When I put pressure on it, it burst and pus came out," she says. 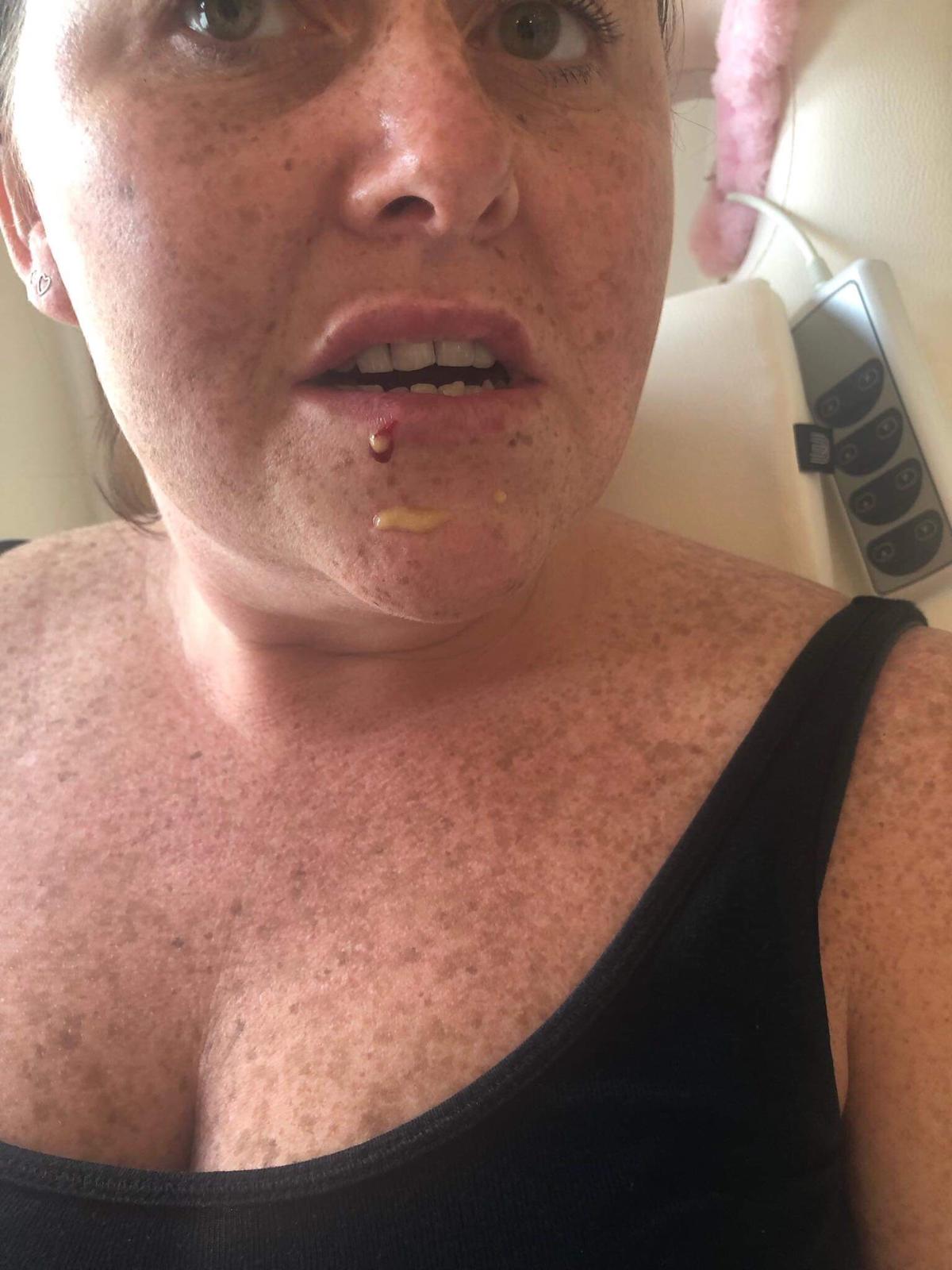 As the days passed, Helen's lips continued to swell and became so painful that she felt she had no choice but to go to A&E.

"I was diagnosed with a severe infection caused by the lip filler which I was told was likely to have been caused by poor needle skills – and possibly cheap filler," she tells us.

"I was referred to a cosmetic doctor."

Unwilling to wait, Helen made an immediate appointment of her own to see a qualified cosmetic doctor.

"She was wonderful. She put me on a prescription for antibiotics and she drained the infected area there and then," she adds.

"Again, the amount of pus that came out was disgusting."

Helen had to wait a further agonising six weeks for her lips to settle before she could return to have injections to dissolve the filler.

Even then, her ordeal was far from over. A few weeks later, Helen developed another infection on her lower lip which required further drainage.

Save Face is a Government-approved register of accredited non-surgical cosmetic practitioners.

They inspect every practitioner and clinic listed on their register against a stringent set of standards.

Each practitioner has been vetted to ensure that they are:

To mitigate the risks associated with poorly injected treatments carried out by untrained and unscrupulous providers visit www.saveface.co.uk. 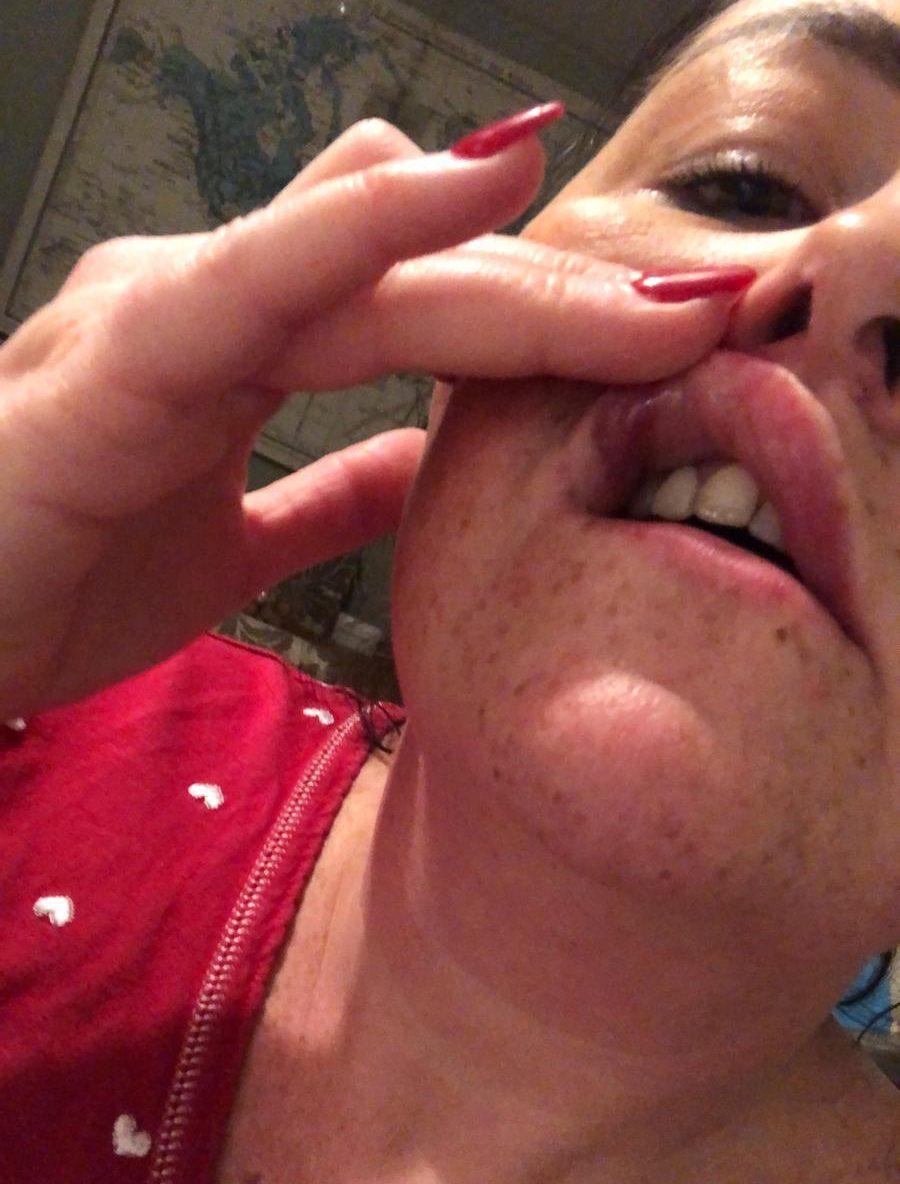 Today, she still has lumps underneath the skin which she has been told will never go.

She also needs corrective filler because of the asymmetry on her lips as a result of her botched procedure.

"It has left me very self-conscious even though my friends have tried to reassure me that they can’t see anything," she says.

"At the same time, I am not sure I could face undergoing another procedure."

Ashton Collins, director of Save Face says: "Helen’s story demonstrates the common themes that nearly all the patients who report complaints to us experience.

"Unfortunately, non-healthcare practitioners are unaccountable which means that in cases such as this, when patients experience complications, that they they are unable to identify and manage they often ignore them, leaving the patient no option but to seek help elsewhere. Luckily, Helen received corrective treatment via one of our accredited practitioners."

Helen is still fuming over the 'callous' attitude of the salon, who have allegedly failed to respond to the complaint she lodged with them eight months ago and have now told her they have lost her records.

"I don’t want them to be allowed to do to someone else what they did to me," she says.

But most of all, she is angry with herself.

"When I think I went to a company and let them inject me in my face – the first thing people see – I wonder how can I have been so stupid not to have done my research first," she adds. 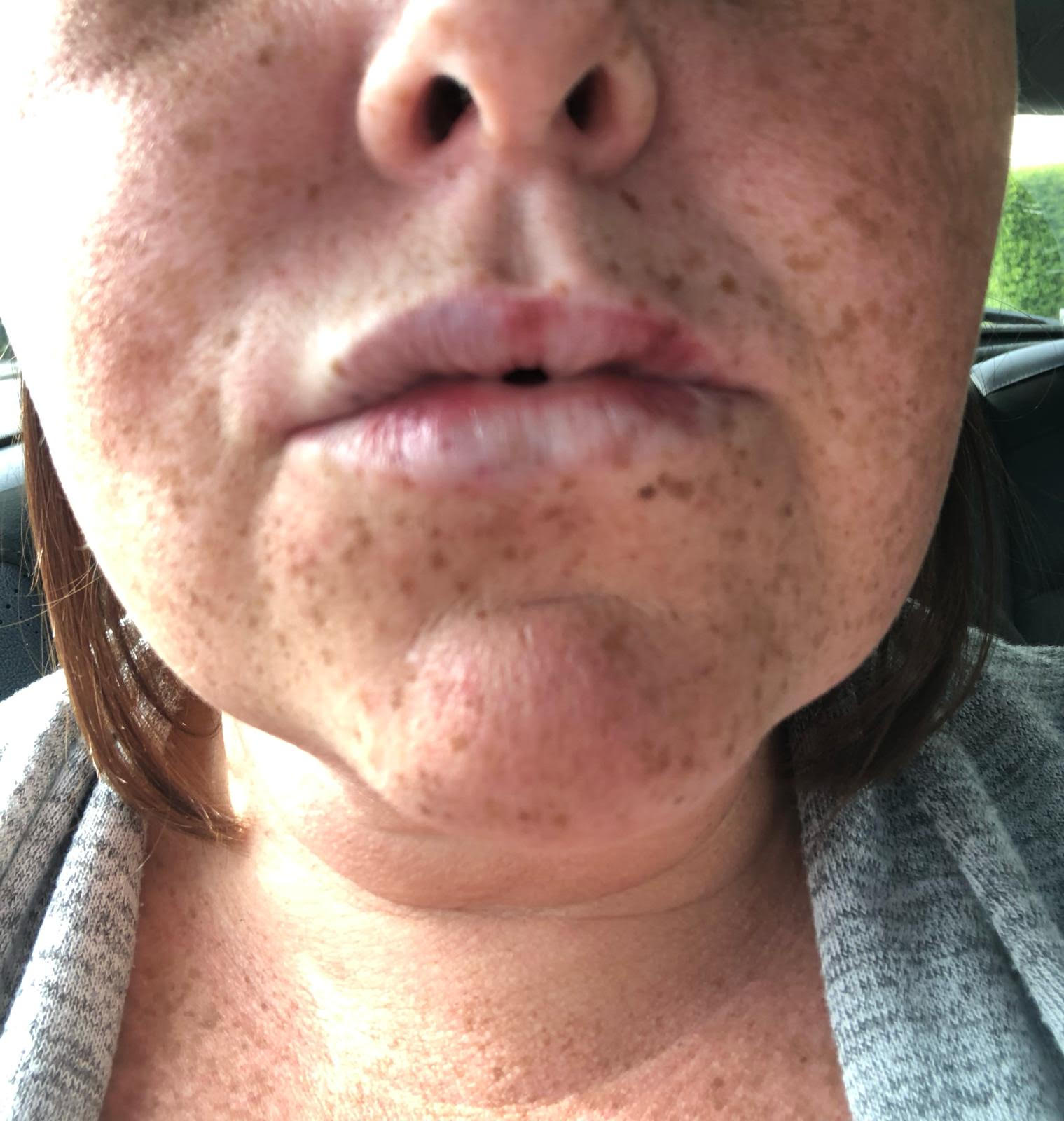 "I read restaurant and hotel reviews before I book. Yet with this, aside from looking at their Facebook page, I didn’t even Google the salon."

"I feel so angry with myself for being so naive and stupid."

"I just hope by speaking out that others don’t make the same mistake."