A DOMESTIC abuser sent a fake suicide video to his ex-girlfriend in a bid to lure her to his house — so he could attack her again. 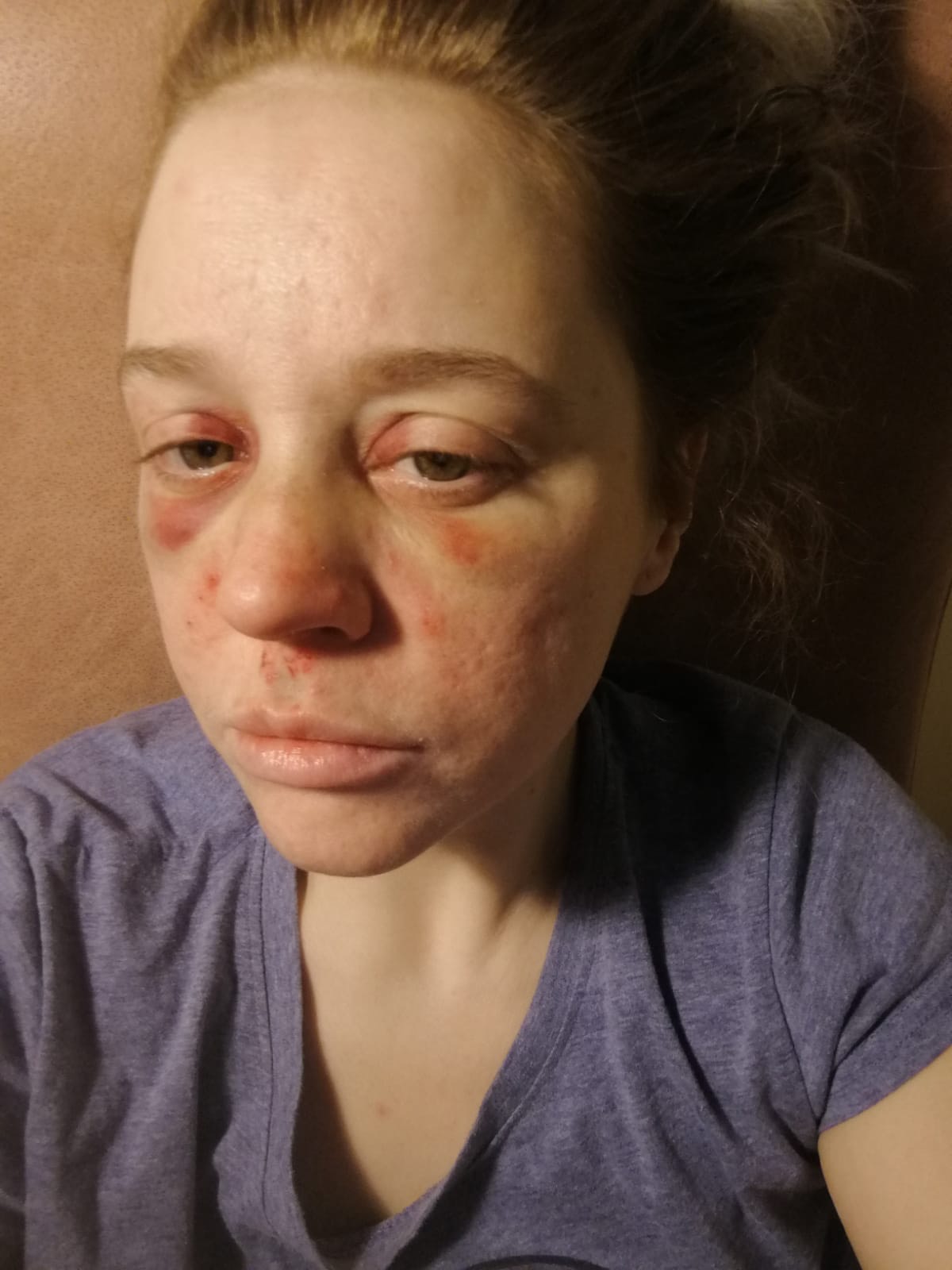 Worried Catherine, 31, sent cops and an ambulance to Mearns’s door after viewing the footage, which appeared to show him hanging himself.

But officers who swooped on his address in Tollcross, Glasgow, found the dad-of-one unharmed and waiting for Catherine with a weapon.

The horrified mum of two, from nearby Shettleston, said: “The police were expecting to find a body, not someone lying in wait with a weapon.

“I wasn’t responding to any of his Facebook messages but then he sent me this video of him pretending to hang himself." 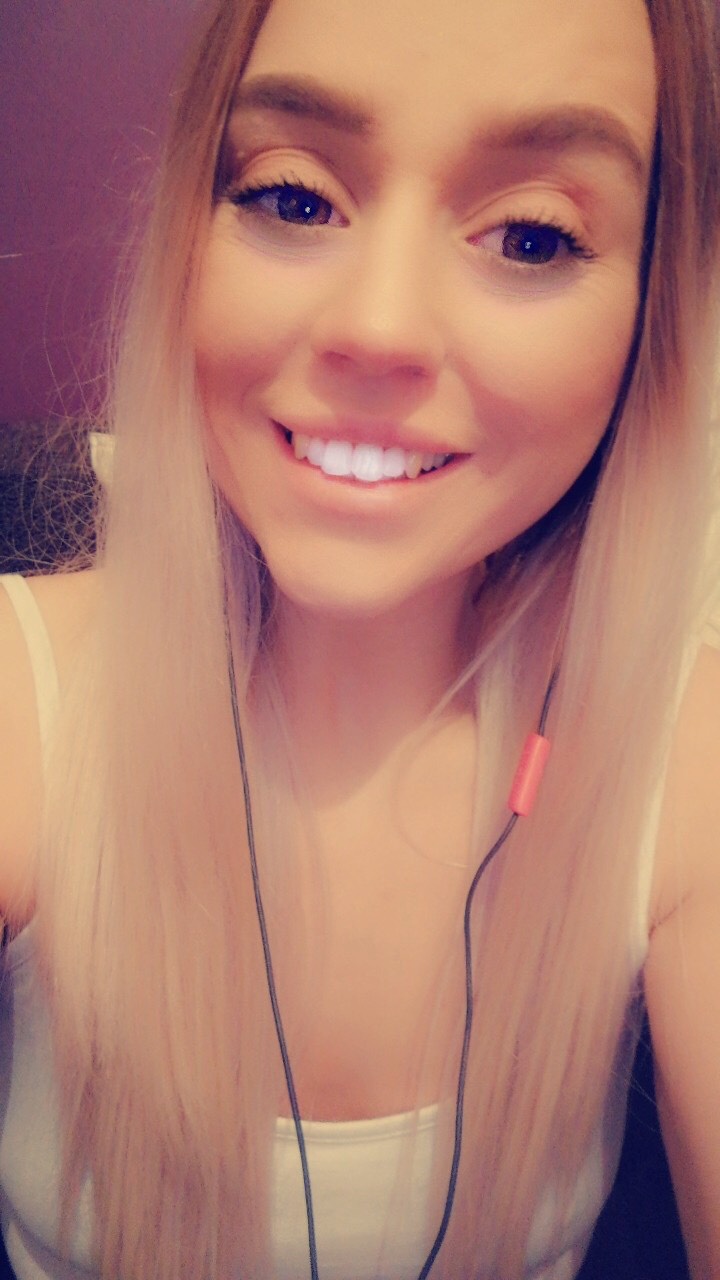 She continued: "I phoned the police and they said when they went through his door, he was sitting waiting there with a weapon.

“They thought he was waiting for me to come down. It was his last-ditch attempt to get to me again.”

The chilling video has been seen by The Scottish Sun, but the details are too disturbing to publish.

In it, Mearns can be heard saying: “This is what you want. For the safety of everybody from this monster.”

His cruel hoax came just days after he jumped up and down on Catherine’s head during a vicious attack in her home last December.

He booted her so hard, his shoe print was left on her face.

At Glasgow Sheriff Court last week, Mearns admitted repeatedly striking Catherine on the head and body and stamping on her head. He was jailed for 32 months. 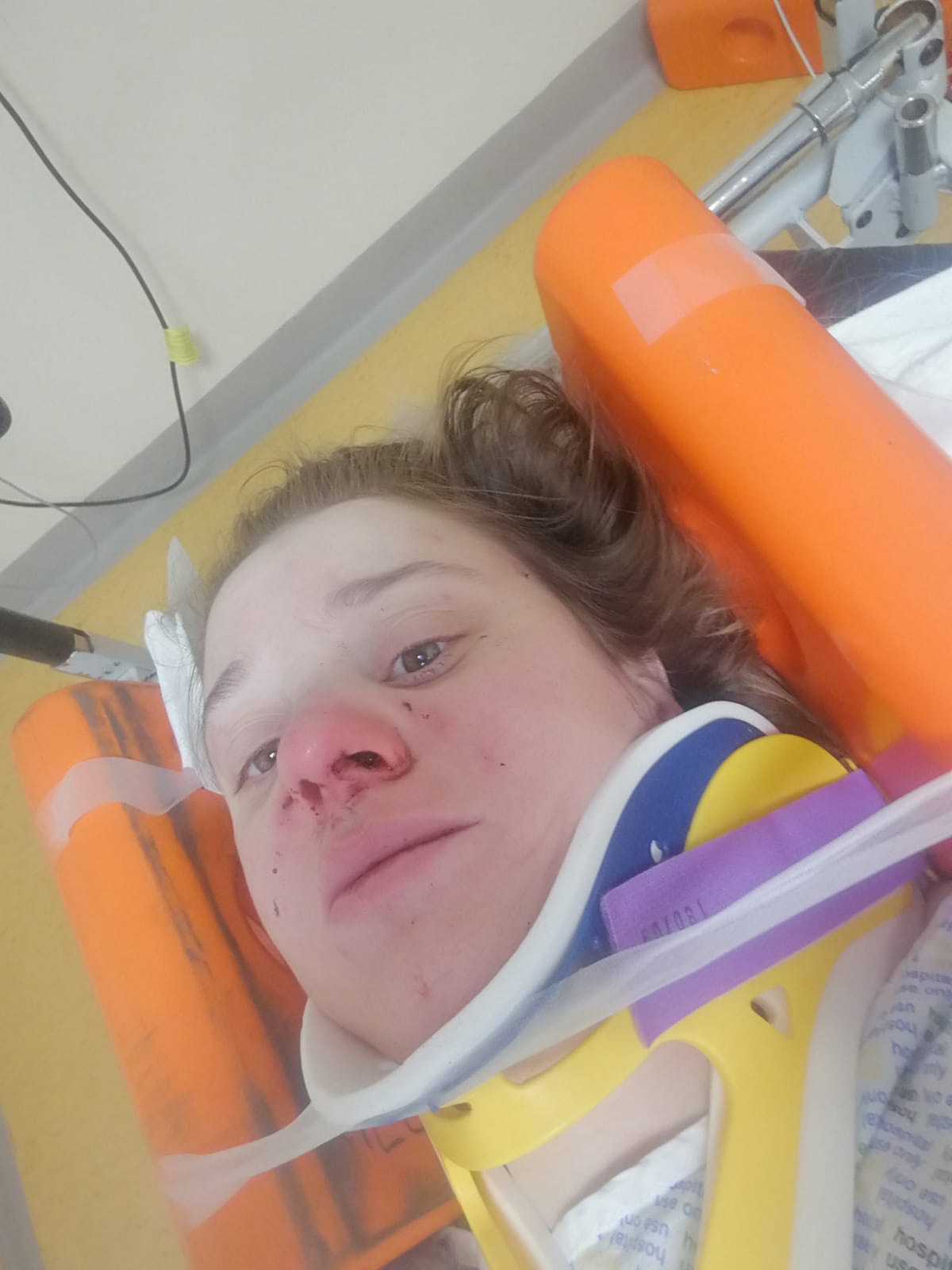 Law chief Andrew Cubie warned him he’ll be under supervision for a further 12 months following his release, and handed him a five-year non-harassment order.

Brave Catherine recalled how she feared she would die after Mearns lost the plot as she packed her kids’ bags ahead of a trip south to visit their dad.

She said: “I was getting a wee bit emotional about it and he then said to me his ex wasn’t letting him see his kid.

“He got a bit more moody and when I asked if he was okay, he headbutted me.

“I fell back and hit the window and landed on the floor. Then he just started jumping up and down on my head like a trampoline.

“I had my hands up and I was begging him to stop. I just remember seeing him put his foot on my bed to push himself up onto the window sill. 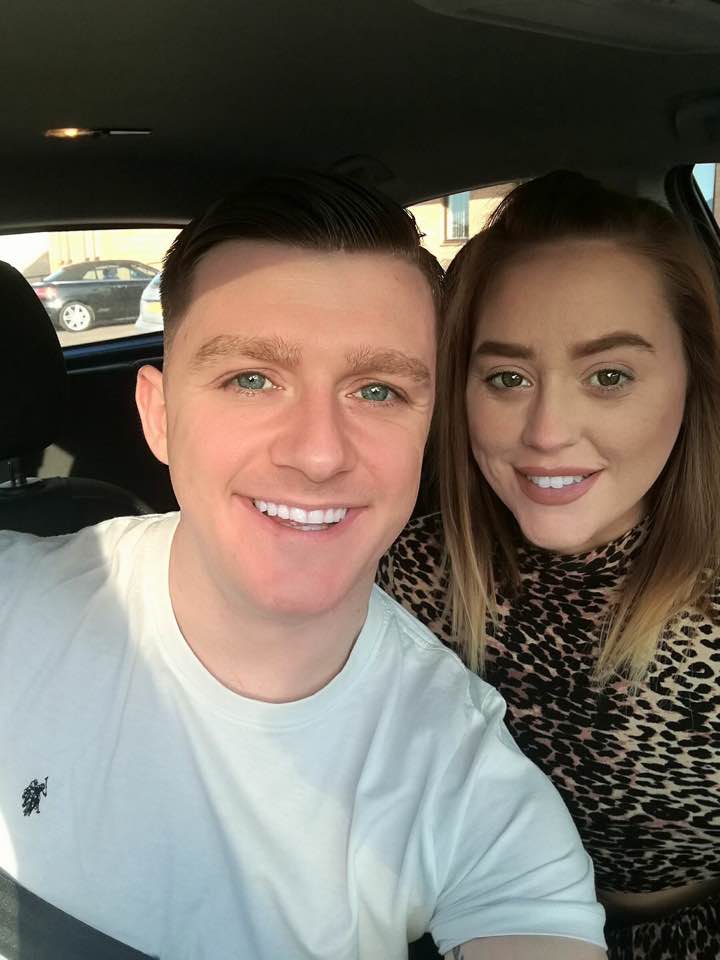 “He threw himself off and jumped down on to my head and it felt like my face caved in. I was losing consciousness but I said to myself, ‘If I black out, he is going to kill me’.”

Catherine told how she begged Mearns to stop and to get out her house, but he refused.

She added: “I asked him to phone an ambulance, but he knew if I went to the hospital the police would get involved. I felt like I was dying — that if I shut my eyes I wasn’t going to waken up.

“I couldn’t hear things and my eyes were drifting shut.

“Somehow I mustered the strength to get up because I knew he was going to kill me.

“I crawled out the room and I was saying, ‘If you don’t get me an ambulance I am going to die’.”

Evil Mearns watched Catherine drag herself to her car — before realising she’d left the keys inside.

LOVE LEFT ME BLIND TO ORDEAL

BRAVE Catherine told how she didn’t recognise herself as a victim of domestic abuse — because she was blinded by romance.

The mum, 31, admitted she missed the warning signs in her own, two-year relationship with violent Ciaron Mearns — despite feeling sorry for others suffering similar horrors.

She said: “I was the person reading the paper and saying I can’t believe someone could get into that situation.

Catherine has urged other abuse victims not to feel helpless — and to turn to their loved ones for support.

She said: “I got to a point where I thought I would never get out of it. But the people who love you are just waiting for you to reach out for help.”

She said: “I told him if he didn’t get the keys, I would blast the horn and get the whole street out.

“He came out and jumped in the car and said, ‘take me home’.

“I told him again I needed an ambulance and he said, ‘Naw, take me down the road’. I could barely stay awake, but I thought, ‘he’s only two minutes away’, so I just drove and dropped him off.

If I could get him away and out my car, that would be it done with.”

Terrified Catherine was so badly hurt in the beating, she couldn’t talk properly.

She said: “When I was speaking, my words were slurring like I was taking a stroke.

“Everything was shutting down and I couldn’t catch my breath.

“I was trying to keep calm because I knew I was in a dangerous, dangerous situation.

“The only thing I kept thinking about was my kids.

“I was supposed to be dropping their clothes off the next day and saying goodbye to them before Christmas.” 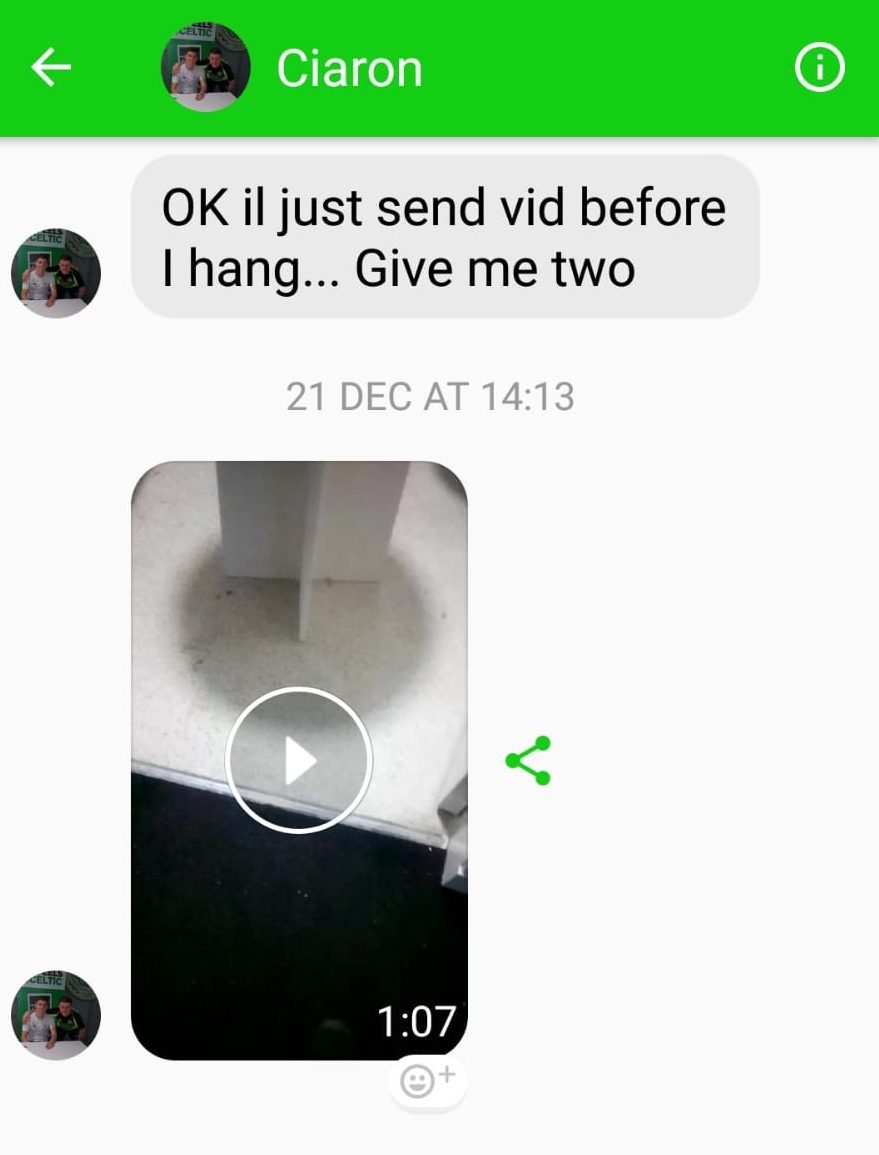 Ex-printer Mearns eventually left Catherine’s motor and she managed to get help from a pal who lived nearby.

The friend took her to hospital, where medics placed her in a neck brace. She suffered a broken nose, a brain bleed, fractured skull and face, broken teeth, a cracked rib and hairline fractures in her neck and hip.

Catherine said: “The doctor told me my injuries were the worst he’d seen in 30 years. He said they were the type you would normally see in a car crash.

“He said to me, ‘I deal with trauma from car accidents and I’ve never seen anybody with injuries this significant from an assault. This isn’t just bad, it’s horrific’

When Mearns appeared in court, his lawyer John McLaughlin said he suffered “anxiety and depression”.

He added: “He was self-medicating with regular bouts of binge drinking. His recollection of events narrated to the court is somewhat hazy. He was absolutely horrified at the stage of proceedings when he was confronted with the evidence.”

Sheriff Cubie branded Mearns “self-pitying and arrogant”, adding: “This was a cruel and vicious attack on a woman in her own home. You are lucky that it was not worse for the complainer.”

Catherine said: “He only gets 32 months but he put me through hell and I’m still suffering the consequences. He knew what he was doing but it means nothing to him.”

Where can you get help?

You don't have to suffer in silence.

If you are experiencing domestic violence or someone you know is there are groups that can help.

Devon was abused by her evil ex – who even sniffed her knickers to make sure she wasn't cheating on him.

This woman was battered on Valentine's Day in a terrifying five-hour ordeal.

Disney’s Beauty and the Beast promotes domestic abuse and Aladdin damages the self-esteem of those with darker skin, experts claim.