Victoria’s Secret is weighing its options as it moves closer to a separation from Bath & Body Works.

Parent company L Brands said earlier this year that it would separate the two brands — either by taking the struggling lingerie brand private or selling it — helping unlock value in the more lucrative soap and sanitizer business. The retailer confirmed on Wednesday that it plans to make a final decision in the next six months, but it was still unclear about its path forward.

“We’re pursuing a dual-path approach to the separation of Victoria’s Secret,” Stuart Burgdoerfer, executive vice president and chief financial officer of L Brands, told analysts on Thursday morning’s conference call. “Dual-path meaning, looking at a spin option where Victoria’s would become its own public company and separately, a sale option where we would sell it to a third party. A sales scenario would very likely have a significant tax cost to it. Whereas a spin-off done in the appropriate way, which would certainly be our intent, would be a tax-free transaction.

“It’s one of many considerations, but obviously the tax leakage could be significant in a sales scenario,” Burgdoerfer continued. “And that with a range of other factors will be considered by the board. As we work through this process we will get the right advice from legal and banking counsel and so on. But the spin option is a tax-free option and we believe it can be accomplished in that way. And that would be one of the advantages of a spin option.”

Burgdoerfer added that L Brands was able to accumulate roughly $3.9 billion in cash in 2020. It also hired outside consultants, including Goldman Sachs and J.P. Morgan, for advice on its next move.

“We’re thinking about reducing debts; we’re thinking about buying stock,” Burgdoerfer said. “We do believe in the opportunity to drive appreciation in the stock, including through a rewriting of Bath & Body Works. And we’re also thinking about resuming a dividend. But these are all things that we’re just thinking about. No decisions have been made. It’s a big subject, but the good news is we’re in a good place.”

That includes improving top and bottom-line sales and profits in the most recent quarter, thanks to a better-than-expected fourth quarter holiday shopping season and growth in the digital channel across all brands, as well as an operating income rate and EBIT range between 10 percent and 15 percent.

The Victoria’s Secret business — which includes the Lingerie, Beauty and Pink divisions — showed noticeable signs of recovery, including improved comparable sales for the quarter, year-over-year, and a 75 percent increase in dollars spent per footstep while in stores. The innerwear brand gained market share in the U.S. women’s intimates apparel space. (Up 3 percent to 19 percent, as of December 2020, according to market research firm the NPD Group.) 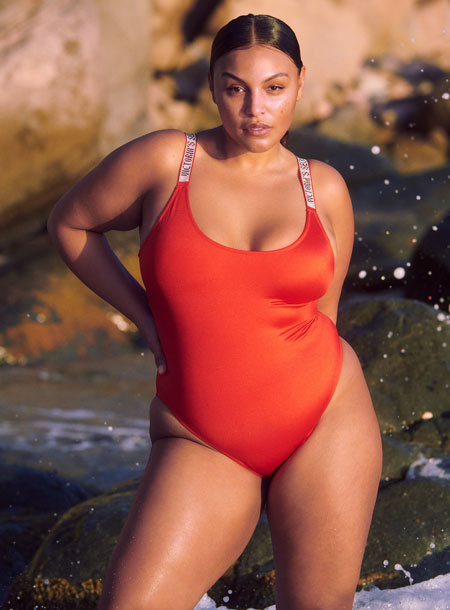 Martin Waters, Victoria’s Secret new chief executive officer, said the lingerie brand was able to accomplish this by updating its assortment, focusing on price points and leaning into digital.

“I couldn’t be more delighted to be leading the work to refresh the brand positioning to make it more relevant, to make it more inclusive, to make it more consistent with the attitude and lifestyle of the modern woman,” Waters said on the call. “And so we’ve listened to her and we’ve carefully decided to make some changes. And that change is summarized by her asking us to move away from telling her what we think is sexy and what we think she should wear and how we think she should look, to being there to help her craft the story that she wants to tell.

“So you will see significant change in the way that the brand is presented,” he continued. “And rather than expecting a big reveal or a big relaunch of the brand, the change in the positioning that I’ve just described will show up in everything that we do on a day-to-day basis. And that means — whether it be the imagery when you turn on the screen on our website, on your phone, through the email that you get every day, in our social media, in the magalog that arrives for the swim[wear] on Monday — every single interaction that we have with the consumer, either polishes or tarnishes the brand and we are determined that we will have a polish mentality in everything that we do from here onward.

“And we know that she’s rooting for us,” Waters said. “The engagement that we saw in the fourth quarter was up significantly to previous years, both in social channels and obviously, in digital commerce generally. We’re winning her back by celebrating her and inspiring her and supporting her to show up, however, she wants to show up.”

The traction Victoria’s Secret has gained in the last year means if L Brands did decide to sell the lingerie brand, it would come with a “substantially greater” price tag than the $525 million sale price from last year’s deal with private equity firm Sycamore Partners, Burgdoerfer said. (The sale was axed amid the pandemic.)

“I think we all appreciate that based on the performance of the business,” Burgdoerfer said.

Investors have recognized the value too. Shares of L Brands are up about 128.5 percent, year-over-year.

“As [Bath & Body Works] continues to generate industry-leading comp performance, VS’ progress is highly notable as well (significant profitability improvement in the fourth quarter, reaching margin levels not seen in many years), with management commenting that the brand has notable opportunity in [first half 2021] for continued improvement (with longer-term margin goals of 10 [percent] to 15 percent), leading us to believe that a VS sale price could be multiples of what it was a year ago,” Ike Boruchow, senior retail analyst at Wells Fargo, wrote in a note. “[Bath & Body Works] continues to prove that they deserve a real multiple as a stand-alone (which management remains committed to pursuing), while VS is proving that they are on a path to sustainable profitability.”

His firm rated L Brands stock “overweight” and set a price target of $75.

Simeon Siegel, managing director and senior retail analyst at BMO Capital Markets, added in a separate note, “It is hard to imagine that less than a year ago, the world was concerned about [L Brands’] liquidity and sought to discard the VS ‘dead weight’ at all costs. Now, [L Brands] leaves [the full 2020 year] with a drastically healthier income statement and balance sheet — we believe the improvement has only just begun. [L Brands] remains our top pick. Buy the shares.”