THE QUEEN insisted on using a ceremonial sword to slice a cake during a royal engagement – making Kate and Camilla giggle.

But there was an undercurrent to her voice which said 'don't challenge me', says body language expert Judi James.

The 95-year-old Monarch was handed the unusual cake cutting tool by Edward Bolitho, the Lord-Lieutenant of Cornwall, at the Eden Project's 'Big Lunch' event.

But despite an aide offering Her Majesty a conventional knife, she persisted with her blade of choice – quipping: "I know there is, this is more unusual".

Judi says the 'stoic' Queen was not going to be challenged – something which made caring daughter-in-law Camilla concerned.

"The Queen’s comment of ‘I know there is!’ produced some laughter from her hosts here as she was told there was a knife option as she brandished a large and rather sharp-looking sword to cut a cake, but there was the hint of subtle warning in her tone," says Judi."

Meanwhile, Kate was more relaxed with her nan-in-law

"Kate’s body language suggested that she picked up on that tone, which many older people will empathise with, which is: ‘Please don’t fuss, I know perfectly well what I am doing thanks!’

"But Camilla’s more anxious rituals suggest she was caught in something of a dilemma in terms of stepping in to help her extremely stoic and independent mother-in-law or to step back and watch a potential accident occur.

"We can see Camilla fretting by the anxious pinching and lifting of her left hand in a truncated gesture and the way her head nods several times.

"She also glances at Kate as though looking for an ally in terms of taking action but Kate looks far more respectful to her ‘Boss’, laughing at the Queen’s joke but not replying to Camilla’s tie-signs.

"After raising her hand to help, Camilla actually seems to nudge Kate on the arm in several small movements.

But Camilla’s more anxious rituals suggest she was caught in something of a dilemma in terms of stepping in to help her extremely stoic and independent mother-in-law or to step back and watch a potential accident occur.

"This is an even stronger plea for joint effort but there is a danger in performing it. One thing a lot of elderly people hate to see is younger relatives nudging one another or catching one another’s eye when they are watching you doing something by yourself.

"Kate, therefore, seems to move slightly out of reach to watch the Queen with a smile of confidence in the fact that her grandmother-in-law will cope well as usual, while Camilla finally decides to take the risk of offering assistance, placing her hand on the sword to help push it through the cake."

After handing the ceremonial sword back, the Queen took a moment to observe her handiwork before saying: "That looks very good!"

Executive director of the Eden Project, Peter Stewart, gushed about the Monarch's visit: "It is like comets – they don't come around very often.

"The important thing for me was there was every reason not to do it.

"The fact that they judged that with the eyes of the G7 that there was an opportunity – with the risk of missing trains and everything else – to be able to listen to some of the heartfelt stories of people here.

"It was absolutely priceless."

The trio of royal women were on a charm offensive as they chatted to the approximately 20 guests invited to the event.

The Queen must have been spurred on by her hosting success at the open-air reception held for G7 leaders, where she was joined by the Prince of Wales, the Duchess of Cornwall and the Duke and Duchess of Cambridge.

Joe and Jill Biden and Emmanuel Macron were left chuckling at Her Majesty's quips at the picturesque Eden Project indoor rainforest. 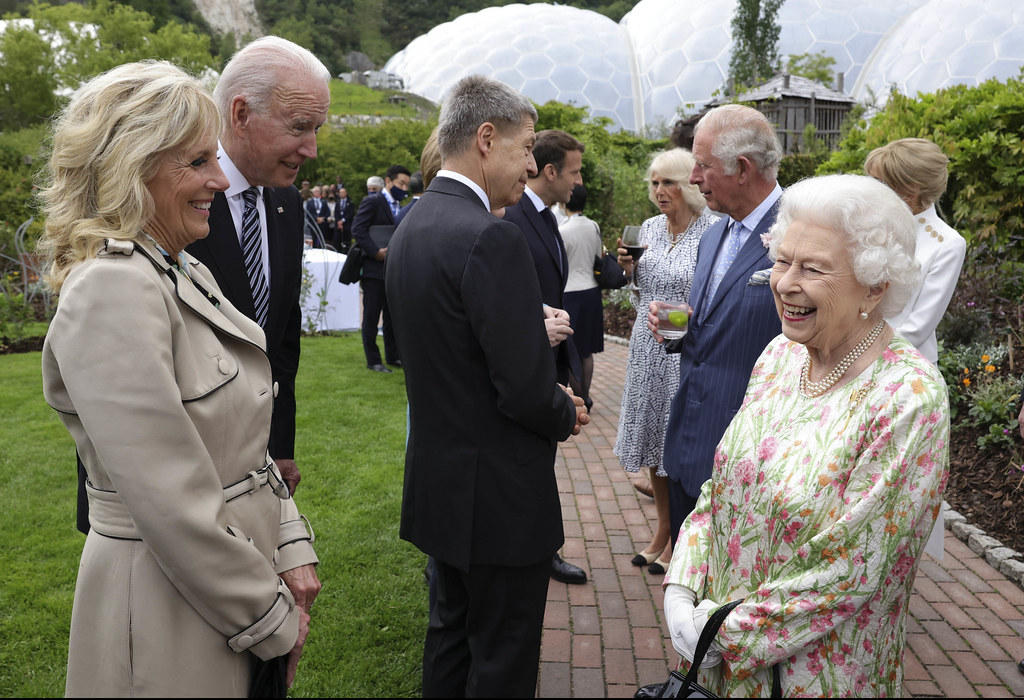 As they posed for a socially distanced group photo, the 95-year-old monarch asked the question possibly on all their minds.

She said: "Are you supposed to be looking as if you're enjoying yourself?"

The presidents and prime ministers alongside her could not help bursting into laughter, as Boris Johnson replied emphatically: "Yes!"

Following a day of heavyweight political talks, the power of "soft diplomacy" was put into action when three generations of the royal family gathered to welcome the leaders to Cornwall.

It was the first time Her Majesty has met the new US president, who was VP under Barack Obama.

The Queen will also host President Biden and his wife Jill for tea at Windsor Castle this weekend.

She will welcome the President and the First Lady in the Quadrangle of Windsor Castle.

Upon arrival, a Guard of Honour formed of The Queen’s Company First Battalion Grenadier Guards will give a Royal Salute, and the US National Anthem will be played.