On Tuesday night in Brooklyn, Rihanna made her bid for global underwear domination.

It took place in the Barclays Center, against a gigantic set that was part stairway to heaven, part Roman Colosseum, part “Chicago” (the Bob Fosse version) and part “Laugh-In,” with a reflecting pool in the middle.

It involved famous singers, famous models in little lace nothings and stiletto heels. There was a lot of writhing, twerking and in-your-face-sexting choreography. Legs were thrust up and out. Groins were grabbed. Breasts and butts were weaponized.

There were bodies of many shapes and many heights and sizes and colors, wearing an assortment of thongs, bras, boy briefs, bodysuits, baby dolls and camisoles, also in many colors and sometimes draped in rhinestone chains. Some abs looked as if they could crack walnuts. Others like a feather mattress.

Halsey sang and wore a teeny black robe. Laverne Cox and Normani gyrated in undies. Migos, ASAP Ferg, Big Sean and DJ Khaled seemed to be modeling their own clothes.

Rihanna herself appeared on a pedestal in the opening number in a black sheer bodysuit, bra, strategically draped micro-skirt and lots of attitude. At the end, she reappeared in a long gown to accept the adoring applause of her populace (sorry, audience).

This was the Savage x Fenty show. 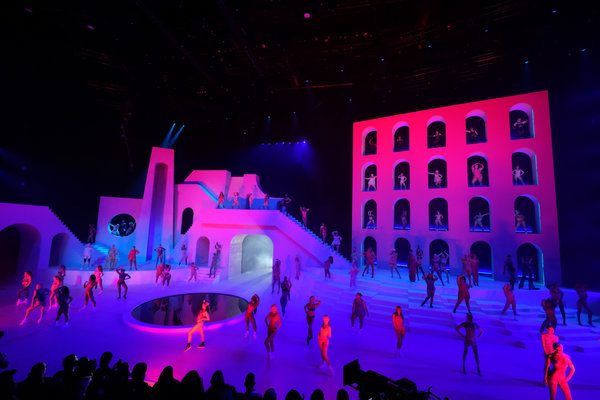 The whole thing was filmed for Amazon Prime, and all the attendees’ phones were put in little locked neoprene pouches so they couldn’t take pictures and ruin the surprise.

Cameramen skipped around the stage and ran through the water like renegade Pac-Men to record it for posterity (or at least streaming): the moment when Savage x Fenty (not to be confused with Fenty, the fashion line Rihanna has with LVMH) finally crushed the flailing Victoria’s Secret beneath its high-stomping, all-inclusive, woman-driven feet.

Which it pretty much did. But it is really so different? Or are we simply trading one kind of sexploitation for another?

The surprise of the event wasn’t how disruptive and mind altering it was. The surprise was how familiar.

Rihanna has just sampled the VS playbook and set it to her own tune — updated the music, the action, the platform, and the message and stadium-sized it.

But don’t be fooled: The ingredients are the same. She even had many of the same models who once walked with great excitement for VS, including Gigi and Bella Hadid, Joan Smalls, and Cara Delevingne.

They have just switched allegiances, and instead of fluffing their hair with a big smile, they are now rubbing their hands all over their bodies with a pout. Instead of wearing wings, they are wearing Cleopatra armbands. They know which way the wind is blowing.

Last year, in its drive to justify its show, VS included videos with the models in which they talked about how “empowered” and “strong” strutting around in their fashion undies made them feel; how it gave them ownership over their bodies. It made people giggle. Rihanna is selling the same idea, albeit more convincingly and to the benefit not of a faceless corporation dominated by older white men, but to a young woman who made her own success.

The “who profits?” thing matters, especially because her sell doesn’t discriminate based on size. And maybe that’s a big enough leap forward. But her show is still as much about the male gaze as the female. The difference is that whereas the VS women always seemed to serve that gaze at its most banal common denominators (sometimes literally, in naughty maid costumes), Rihanna’s women own it, manipulate it and crush it between their thighs.

They aren’t angels. They are dominatrixes and sirens. Those are different roles, but they are still old ones. And they are still objects, even as they revel in their own willing objectification.

And that means that while you have to give Rihanna credit for wiping VS off its own playing field, and while she did rewrite many rules, it is still possible to wish she had been inspired enough to change the game entirely.