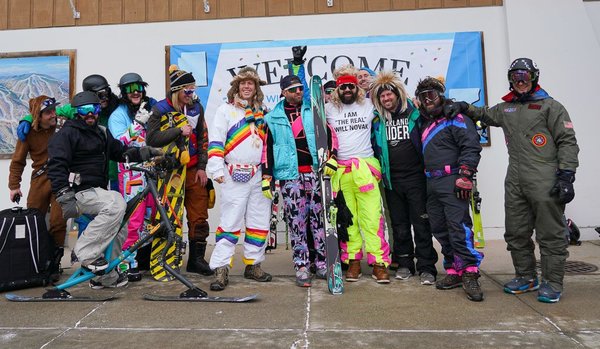 And now the bachelor party is history too. It was apparently fairly epic — and a welcome distraction for an eager nation.

“Dozens of people, maybe even hundreds, have said things along the lines of, ‘Well, the news cycle is so depressing, people are deeply upset by what they see on the news, and this is so stupid and so funny” — a welcome diversion, in other words, said Will Novak, 35.

There were some close calls along the way, including the brief theft of a $75,000 Maserati S.U.V. entrusted to Mr. Novak by a rental car company. He was a designated driver all weekend, since he doesn’t drink. On his first night there, out late at a bar with his fellow bachelor partygoers, he met four drunk women from Manhattan. They were trying to get home but couldn’t call an Uber because, as Mr. Novak kept saying, there’s no cell phone service in Vermont. So he offered to drive them.

When he went inside the bar to tell the women he had pulled up the car outside and was ready to go, a drunk man jumped in the Maserati and took off. Mr. Novak was “terrified,” he said. Within a few minutes, though, the car thief returned. He just wanted to take such a nice ride for a spin, apparently. “If I’m honest, I was really upset,” Mr. Novak said, “but I tried to be jovial about the whole thing.” Why didn’t he call the police? “There’s no cell service in Vermont. It would be a great state to commit a murder in for that reason.”

Though there was also a shoulder injury serious enough to leave Bill Novak (the actual invitee) heading back to Brooklyn with his arm in a sling, things had a way of working out. And, Mr. Novak (the stranger one) was nearly deafened by fireworks his fellow partygoers set off upon his arrival.

Angelo Onello, the groom-to-be being celebrated, incidentally will end up $3,000 richer as another result of the email mistake made by his brother, Devin Onello, the bachelor party’s organizer.

By the time of Mr. Novak’s flight from Arizona to Vermont, the GoFundMe had raised almost $5,000, much more than he needed to fund the trip. So he is donating the surplus to Mr. Onello, of Midland Park, N.J., and his fiancée, Devon Cianciaruso, who is four months pregnant.

“We both work full-time, but we’ve got a lot of expenses with the wedding and renovating our house. So we can use that money for the baby’s college fund, and it was extremely nice of him to do that for us,” said Mr. Onello. They plan to marry Feb. 1 in Wyckoff, N.J.

Mr. Novak considers it extremely nice of the Onellos and his fellow Vermont partygoers to have welcomed him warmly, despite a few handicaps when it came to fitting in. As a teetotaler among a group known for its partying, Mr. Novak knew he was out of his depth. Ms. Cianciarusco, who watched footage of her fiancée’s party on social media during a bachelorette party at a spa back in New Jersey, said Mr. Onello’s life could easily have been the inspiration for the movie “The Hangover.”

Plus, Mr. Novak had only been skiing once before, as a 14-year-old, and didn’t know how to dress for the occasion. The invitation requested guests to pack outfits with the question, “What would Angelo wear?” in mind. In his acceptance reply, Mr. Novak offered to wear a wrestling singlet picked up from a WWF event in 1989, as he didn’t know Mr. Onello. (In the end, he wore a rainbow-striped ski suit most of the weekend.)

He felt, he said, comfortable in the ski suit among his new friends. Though he bonded with most of the other 20 men in a superficial way, through intervals of what he called “jumping around and listening to metal music,” he especially liked getting to know the other William Novak.

“I connected with him a lot,” he said. “We have similar political views and we like some of the same bands and the same movies. I definitely think we’ll stay in contact.”

The Phoenix Mr. Novak also plans to stay in touch with some of the 10,000 Instagram friends he has made since flying to the bachelor party — especially the moms. Mr. Novak said he had been peeking into analytics and found that many of the viewers following the action on Instagram at last weekend’s Vermont bachelor party were women ages 35 to 50. “There’s a lot of stay-at-home moms who are like, ‘Your story reminds me of my youth! We all wish we could leave our kids behind for and go off for a weekend,’” he said.

“I’ve got a cougar following now, and that’s been my goal my whole life,” he said, a day after returning home from Vermont. He was joking. But there is one goal he is serious about.

Though the attention has him courting suggestions to host a travel adventure show, or to take his personality to Hollywood in some other capacity, he wants to help his wife, Veronica, mother to their now 10-month-old daughter, Olivia Rose, realize a dream.

Mrs. Novak currently works full-time at an event planning company. But “she wants to be a full-time mom and to have another baby, and I will do whatever it takes for her to be one,” he said. “Even if it means I have to till a field or something. I’ll do it.”

“I Doozy” is an every-so-often feature highlighting people, places or things related to Weddings.