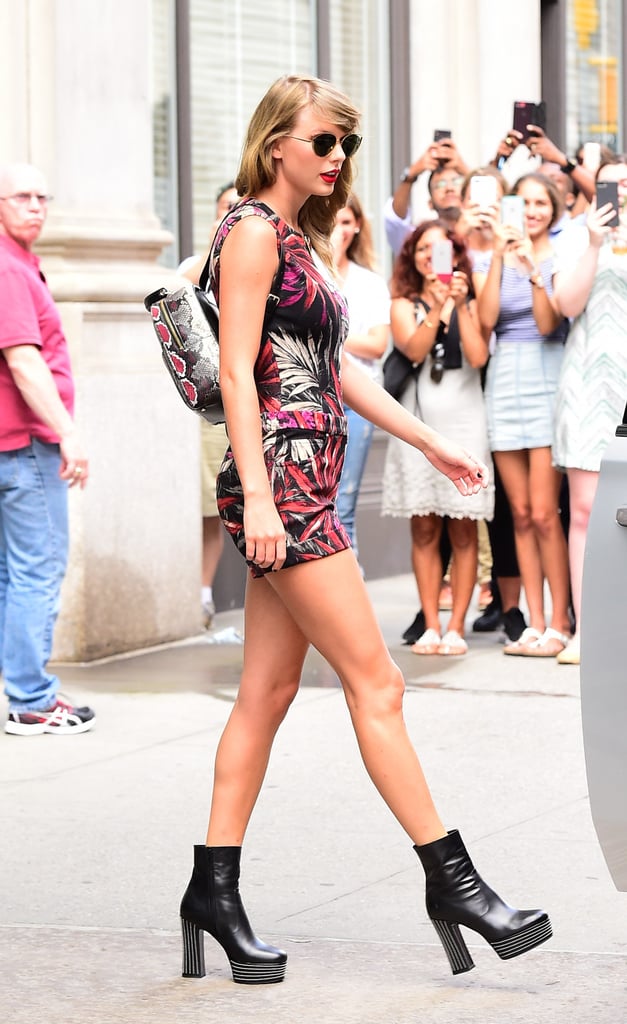 Chances are you didn’t do much to celebrate National Snake Day on July 17 (yep, that’s an actual holiday, apparently), but you can probably guess which celebrity went all out for it: Taylor Swift. The “Delicate” singer honored the day by suiting up in an outfit that threw some not-so-subtle shade at Kim Kardashian exactly two years after the reality star openly compared her to a slithering serpent on social media. Now that’s what we call a power move!

Taylor was spotted on the streets of New York City rocking the hell out of an outfit that was packed with hidden messages for her haters. For starters, her colorful romper — a custom number by Fausto Puglisi — was made with the same fabric as one of her outfits in the music video for “Look What You Made Me Do.” But best of all, she paired it with a red, white, and black snakeskin backpack by Kate Spade New York as a nod to her feud with Kim Kardashian and Kanye West. There’s not a doubt in our minds that it was a planned, purposeful, and downright powerful middle finger to her critics as she jetted off to what was likely a sold-out show in Cleveland.

The star finished her look with cat-eye sunglasses by Linda Farrow, YSL platform leather booties, and her signature red lip. Taylor’s snake-print backpack is unfortunately not available for purchase yet, but we tracked down similar styles for you in the meantime. Shop them ahead after admiring Taylor’s outfit and reading through some of her fans’ reactions to the shade-throwing outfit choice.