WHEN Joanna Girling jetted out to Egypt in June 2018 with her husband, she was looking forward to a romantic week away in the sun.

But little did she know, she was about to fall head over heels in love with a local man over 20 YEARS her junior. 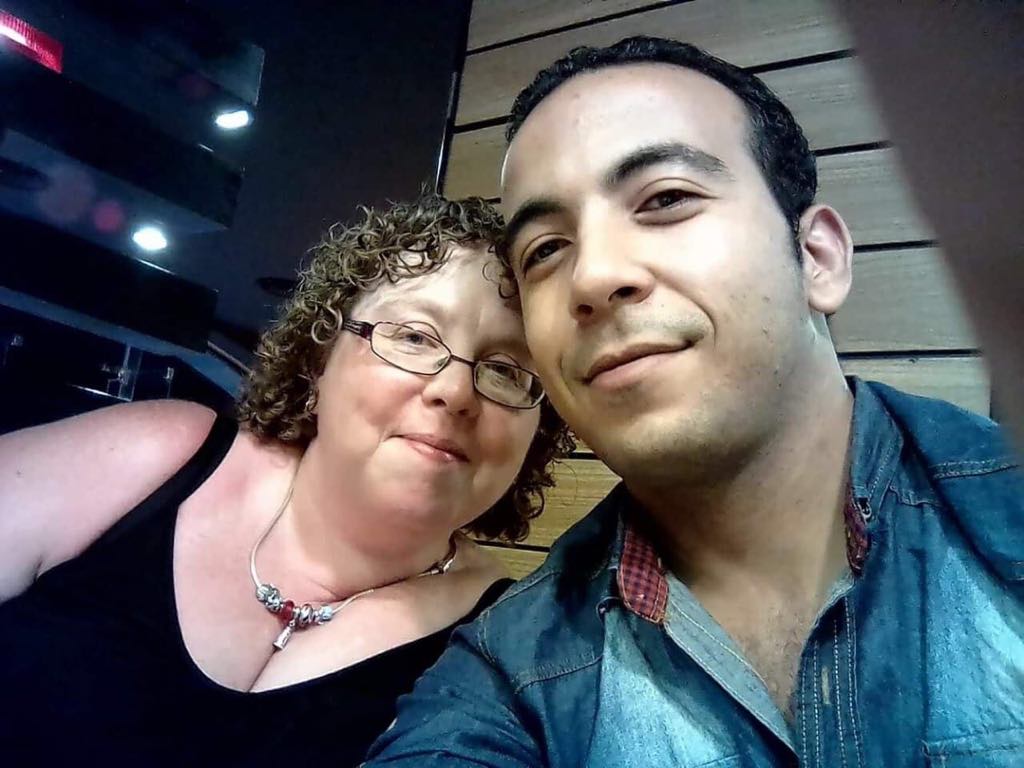 Hassan Kahlied, 24, was waiting tables at the Sharm-El-Sheikh hotel Joanna, 45, was staying at with her husband of 20 years.

The Tesco worker admitted that she hadn't slept with her husband for almost a decade at the time and was flattered the attention Hassan gave her.

Joanna said: "Like a lot of married couples we became less and less attracted to each other but we stayed together for convenience."

When her husband was away from the table one night, Joanna said Hassan came over and convinced her to spend the next day exploring the city with him. 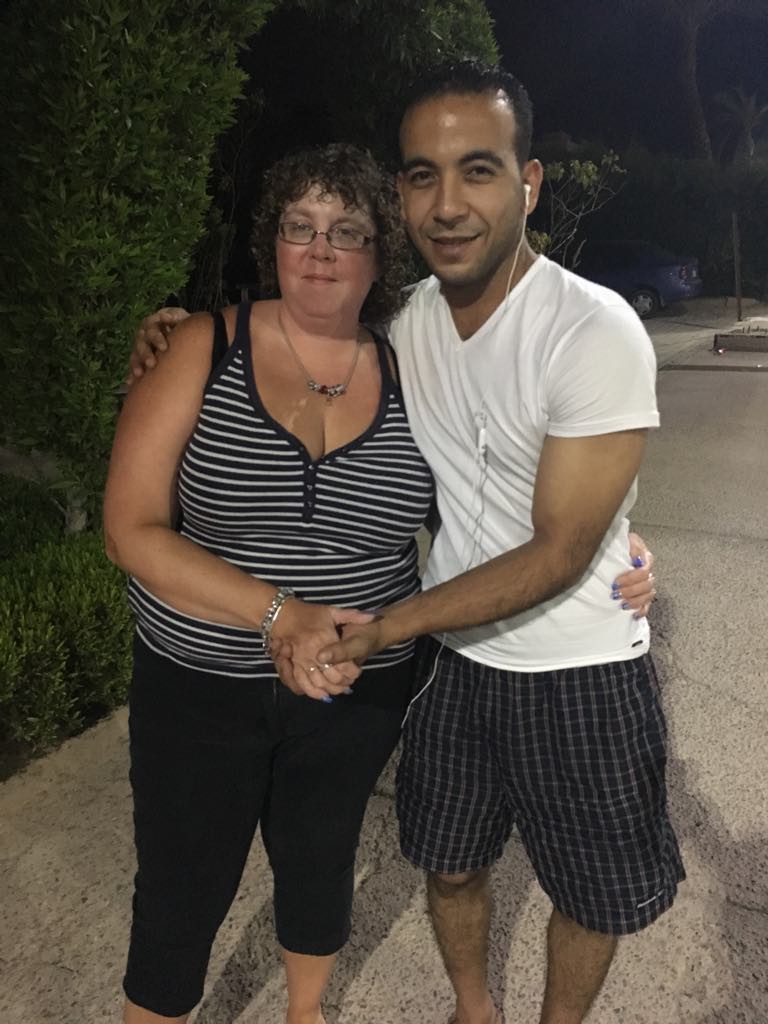 She explained: "He was so flirty from the start that I knew he fancied me.

“We were talking and he made me feel sexy for the first time in years. I began sneaking out in the afternoon to meet him while John was lounging by the pool.

“I wanted to sleep with him from the first day I met him but Hassan said that we’d need a fake marriage certificate first. Egypt is strict about premarital sex so we couldn’t rent a room together without one.”

Finding a way around their problem, Joanna and Hassan obtained a fake marriage license online to rent an apartment where they could have sex. 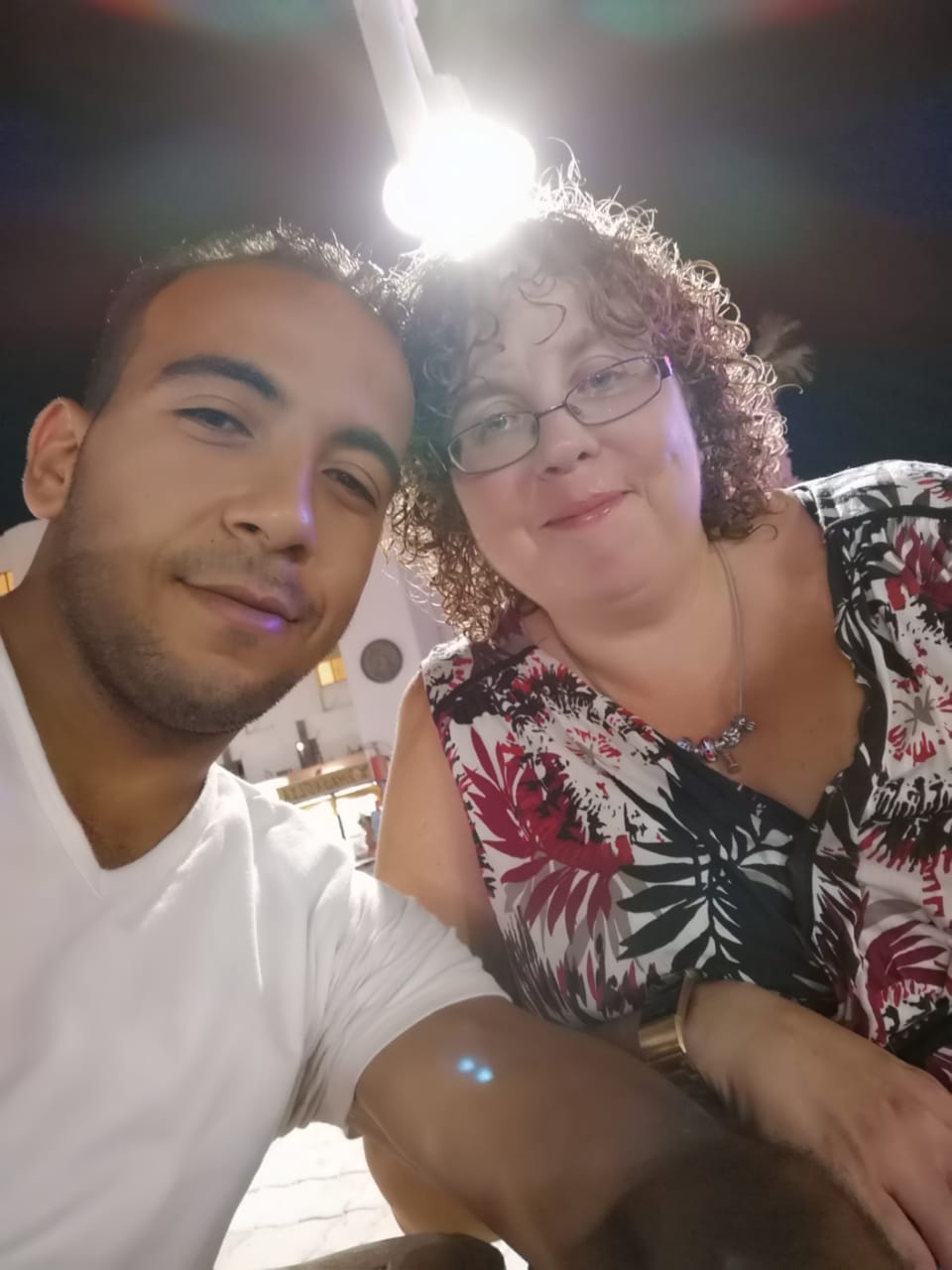 She said: "It was incredible, he was so young and keen. It was the best sex of my life – mindblowing after 10 years of no physical contact. I knew then that I had to leave my husband.

"We’d gone a decade with no physical contact at all. It was no way to live – it was no longer a marriage. It was the end of my trip but Hassan wanted to see me again so even on the way home I was making plans to return."

When she returned to her home in Norfolk, Joanna ended her 20-year marriage and came clean about her affair.

"He was furious but he’d suspected something was going on," Joanna said. "We didn’t have kids but we had seven dogs together."

Hassan was so young and keen. It was the best sex of my life – mindblowing after 10 years of no physical contact. I knew then that I had to leave my husband.

In the two months she was back in the UK, Joanna continued working night shifts at Tesco and sent Hassan money to pay for food and bills.

In August 2018, Joanna returned to Hurghada with arms full of gifts Hassan had requested – including jeans, shirts, trainers, aftershave and a bottle of Cognac.

She said: "He also took control of my holiday money, of £1,100 saying that he’d handle it.

"At first I was surprised but he explained that it was the custom in Egypt for men to deal with the money. He said he wanted to look after me so I handed over all my cash." 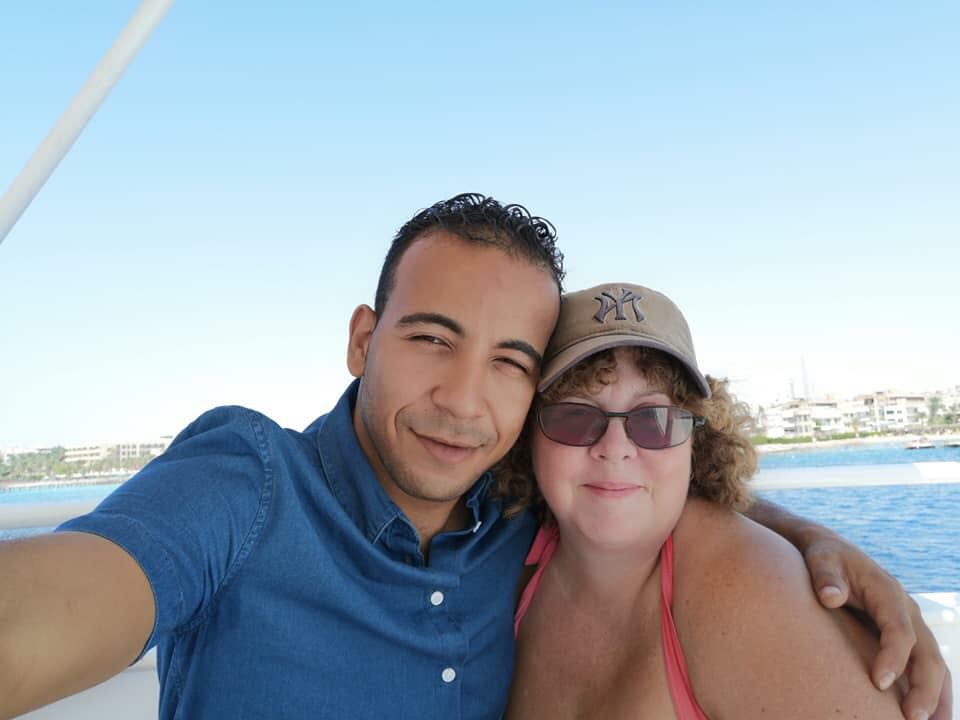 The couple rented an apartment with their fake license and filled the days with sunbathing and passionate sex.

"We were having sex all the time, we just couldn’t get enough of each other," she said. "But after a couple of weeks, Hassan kept disappearing for days at a time, saying he needed to visit his family."

On one occasion, Joanna claims Hassan left her for two days without any cash and she had to find work as a nursery worker to get some money quickly.

"I’d try to ring him but there’d be no answer," she said. "After splitting from my husband I had no savings, the cash I’d brought with me was all I had."

We were having sex all the time, we just couldn’t get enough of each other.

Growing increasingly suspicious, Joanna decided to ask their neighbours where Hassan was sneaking off to.

"One [neighbour] said that he thought Hassan had gone home to have an engagement party as he was due to get married," Joanna said. "I was devastated but over text Hassan insisted it wasn’t true and when he returned after 10 days he denied it."

At the end of August, Hassan asked Joanna to go home for a few weeks – claiming the apartment was too expensive and that she needed to save more money as he couldn’t keep them on his small salary.

"I was devastated to leave,” she admitted. "But he had a point, I had no money left and he only earnt a small salary as a waiter. My holiday money had all gone so the plan was for me to come home, stay with family and work to save money to go back." 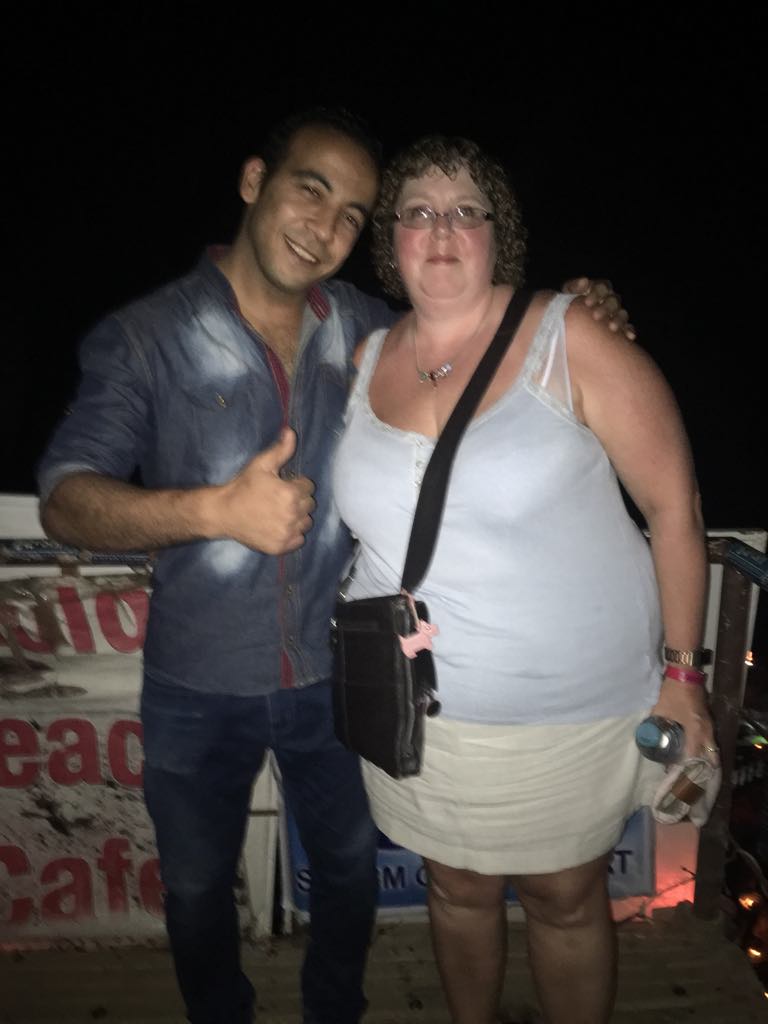 Joanna was forced to ask a friend for money to cover her flight home – and during a stop-over in Hamburg, Hassan showed his true colours.

Now that she was out of the country, Joanna's toy-boy admitted that he was marrying an Egyptian girl over text before calling her "fat and old".

Despite everything she's been through, Joanna returned to Egypt in March 2019 to work as a nursery teacher because "didn't have anything" keeping her in the UK.

"I didn’t go out there looking for love," Joanna insisted. "I just love the country and wanted to be back there."

Unsurprisingly, Joanna didn't hear from Hassan again after he blocked her on social media.

Hassan Kahlied said: “I'm so sorry about the money. It was because I am poor. I don't want to discuss anything about my relationship.” 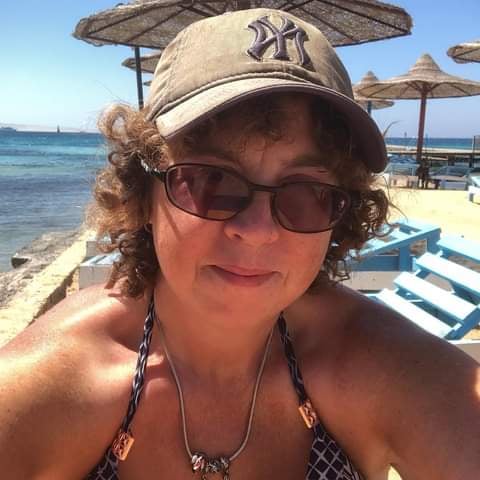 But after three months in Hurghada, she found love again with shopkeepr Hysm Feygo – who invited her and a female friend in to look around his herb and spice shop.

“I can’t quite grasp what it is but there’s just something about him, he makes me feel comfortable and, from the moment we met, it was like we’d known each other a long time.”

Having walked her friend back to her hotel, Joanna then returned to the shop to ask Hysm to order her a taxi to her apartment.

“He joined me in the cab and we had sex that night. It was amazing but at first, it was just about sex," she said. "Hysm wanted a relationship but I’d already been hurt once by Hassan so I was wary but the more I got to know him the more I trusted him. He didn’t ask me for a penny.”

The couple moved in together under another fake marriage license before tying the knot last year – and they're now trying to have a baby.

"He didn’t even propose," she said. "He didn’t need to – he already considers me his wife but we’re hoping to make it official next year once I’ve divorced my husband."

"We have sex every other day and I’m hoping I’m not too old to get pregnant. I’m very happy with my toyboy who never asks me for money. I know he’s with me because he loves me.

"Most of my family has disowned me, they haven’t spoken to me since I returned to Egypt. They think I’m foolish to be with him but I don’t care. This is like a second chance for me.

"My life is unrecognisable to a couple of years ago and I wouldn’t take anything back. I love Hysm so much.”

For more relationship horror stories, this woman claimed she busted her date checking out other women online thanks to his GLASSES.

And this woman suspected her boyfriend’s cheating so returns early from a girls’ holiday – and catches him in the act.

Plus this woman fell in love with a stranger she met online in lockdown – he moved 10k miles to be with her but dumped her 3 WEEKS later.